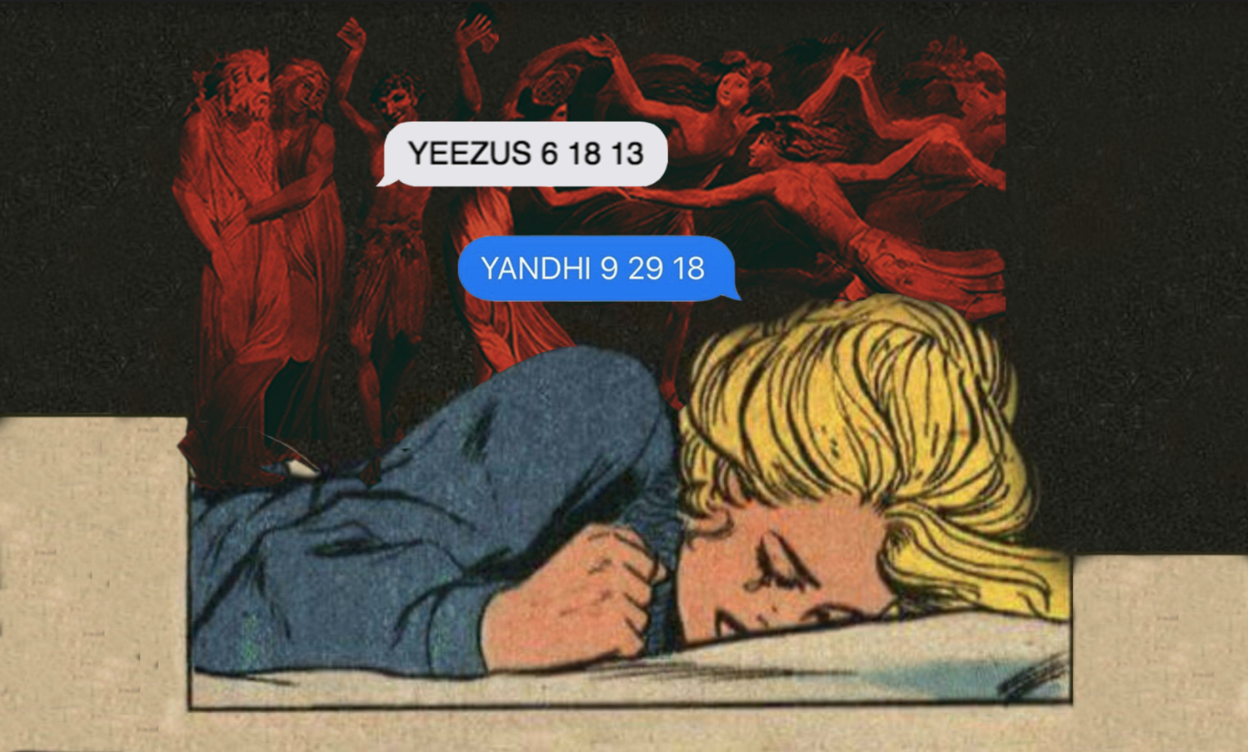 On September 17th, human clickbait/artistic visionary Kanye West set the internet ablaze by cryptically posting on his Instagram a picture of a blank CD-R that distinctly resembled the artwork for his 2013 album Yeezus.

Details soon followed that he would be the musical guest for the season premiere of Saturday Night Live on the 29th and that his new album, titled Yandhi, would be dropping that night. Due to the similarities in album art—and titles that fuse Ye’s name with some larger than life historical figure—people have been heavily speculating that Yandhi is Yeezus 2.

Nearly half a decade since the release of Yeezus and with Yandhi (hopefully) right around the corner, I figured that there was no better time to reexamine the one Kanye album that manages to be just as polarizing as the man himself.

To best understand the context of this album in Kanye’s career we have to briefly set the scene. Think back to 2013, a lot has changed since then. Kanye was pre-MAGA hat, pre-TMZ debacle, and pre-Pornhub awards. The man had been exiled from the public eye for his Hennessy-and-truth-fueled Taylor Swift outburst at the VMA’s in 2009 and bounced back with one of the most ambitious and artistically revered releases of our lifetime with 2010’s My Beautiful Dark Twisted Fantasy.

MBDTF challenged hip-hop’s conventions and was filled with lengthy songs featuring some of his strongest bars to date on top of overstuffed beats with string sections, classic rock samples, and Elton John interludes. It was an art rock album masquerading as a hip-hop one. It’s the only album I’ve ever encountered where you can hear a guitar solo followed by a Rick Ross verse and somehow it all feels perfectly in place.

In 2011, he chased this creative peak by releasing and touring behind his collaborative luxury-rap album Watch the Throne with Jay-Z. It was a massive critical and commercial success, and the two megastars trotted around the globe performing their respective hits and even performing their newest hit single “N***as in Paris” up to 11 times a show. It served as a much earned victory lap for Kanye’s resurgence and creative peak.

So, how does one chase the most universally acclaimed album of its era? In Kanye’s case, he took the grandeur he had so much success with on MBDTF and Watch the Throne and stripped it bare.

He flipped his winning formula inside-out and made his most angry, abrasive, and artistically challenging effort to date.

Where MBDTF was grand and sprawling, Yeezus was concise and uniform — entirely devoted to its unique blend of industrial, punk, trap, and Chicago drill.

This album found Kanye at the peak of his infatuation with high-end fashion, architecture, and raging against those industries that he felt were boxing him into being nothing more than a musical artist.

It’s an album that vents that frustration into 40 minutes of some of the most noisy, angry, and exhausting music we’ve heard in recent history from any mainstream artist of any genre.

From the grossly distorted opening acid house synth squelch of the Daft Punk co-produced “On Sight,” it’s apparent that Ye wasn’t out for radio play or hit singles on this album. Rather, he was out to deliver a cohesive album that was as experimental and polarizing than that of any chart-dominating pop star of our time.

“On Sight” is easily the harshest-sounding song on the album, yet it’s a brilliant opener as it is a microcosm of the album itself. The bare bones production of just a synth and a drum machine highlight the minimalism featured throughout the album, which prominently is built from jarring vocal tracks, sharp synth blasts, and menacing dancehall samples. If the atmosphere on these tracks isn’t abrasive and ugly enough already, Kanye’s lyrics are unfiltered, lewd, and at times downright in cringe-worthy.

However, as we see throughout this album, there is hope within the madness. At the center of all the ugliness of “On Sight,” the track drops out momentarily to bring in a gorgeous gospel sample. Among all of the grotesque lyrics and industrial soundscapes there are glimpses of redemption to be found on later tracks in the album.

“Black Skinhead,” his collaborative track with revered French techno producers Gesaffelstein and Brodinski, rides a glam rock beat into one of Kanye’s most breathless choruses that escalates into screams, creating one of the most claustrophobic bangers in Kanye’s discography. The ability to turn such unorthodox and ominous track into a song that’s been streamed roughly 245,000,000 times on Spotify alone is a testament to his knack for fusing song craft with experimentation.

Similar to Miles Davis, Kanye’s ability to get the most out collaborators within recording  sessions to assemble his artistic vision is easily one of his strongest assets as an artist. Yeezus features a diverse group of collaborators from Bon Iver’s Justin Vernon, to house legends Daft Punk, to a relatively-unknown at the time Travis Scott.

Also, this album marked a starting point in a trend we’ve seen with Kanye from Yeezus through his most recent album ye: it was being tinkered with right up until its release date. Most notably, Def Jam’s legendary co-founder Rick Rubin was brought in at the final hour to help strip down the tracks into a more minimalist style and shaved the tracklist from 16 to 10 songs (maybe those other six will finally see the light of day on Yandhi). This album definitely embodied the “less is more” strategy, and in our current age where major rap releases feature overstuffed tracklists in order to boost streaming numbers, it was refreshing to go back and listen to an album that was concise, uniform and stands on its own as an artistic statement (take note, Drake).

Musically, this album manages to be exhilarating, grating, and provocative all at once. The Assassin verse on “I’m In It,” is at times indecipherable, but is a blast to try and keep up with. “New Slaves” is a cry to Kanye’s earlier, more socially conscious work, discussing racism in varying levels of society, albeit in an overtly angry tone. “Guilt Trip” manages to sneak in Star Wars allusions before reaching a heartbreaking climax of Kid Cudi crying out over a string section that would have sounded right at home on MBDTF.

“Hold My Liquor” is another story of heartbreak soundtracked to pulsating synths, metallic shards of distortion, and an extended guitar solo outro. It also happens to be the only song, to my knowledge, to feature both Chief Keef and Bon Iver—two wildly disparate artists that manage to both contribute to the dystopian atmosphere of the song.

“Blood on the Leaves” could very well be viewed as the album’s centerpiece and manages to sample Nina Simone’s rendition of “Strange Fruit” (a haunting track about lynchings) while telling a self-absorbed tale of the aftermath of a molly-fueled hookup gone wrong. The combination of those two polar opposites could be downright blasphemous for nearly any other artist, but by the time his brilliantly-selected sample of TNGHT’s “R U Ready” drops, you’re on the edge of your seat. Kanye’s bold willingness to follow his creative inclinations on his albums from 808s through Yeezus is something we haven’t seen from a modern artist with his level of mainstream appeal since its release.

After nine exhausting tracks, we get the redemptive love song “Bound 2,” which harkens back to the soul-inspired production of his early work. After the darkness and polarizing content of the previous nine tracks, he offers a funny, introspective, and gorgeous palette cleanser that acted as a tip of the hat to those who missed “the old Kanye.” It showed the world that he still could produce the type of music he built his name upon, but he wasn’t content to creatively stagnate on it.

Rarely do we see a mainstream artist on such a creative tear with no regard for conventionality, and therein lies the brilliance of this album.

A few months before his death, rock legend Lou Reed perfectly encapsulated everything that makes this record remain a strange but striking masterpiece in the discography of a man who’s made a few of them: “There are moments of supreme beauty and greatness on this record…the guy really, really, really is talented. He’s really trying to raise the bar. No one’s near doing what he’s doing, it’s not even on the same planet… and sometimes it’s like a synth orchestra. I’ve never heard anything like it…If you like sound, listen to what he’s giving you. Majestic and inspiring,” Reed said in an interview with Talkhouse.

Yandhi has some big shoes to fill, but if anyone has enough irrational self-belief to fill those shoes it’s definitely, Ye.

Max Chacon is a KCPR staff member and a fourth-year Environmental Management and Protection major. He wrote the article. Graphic made by Elena Fox.

When music and politics collide