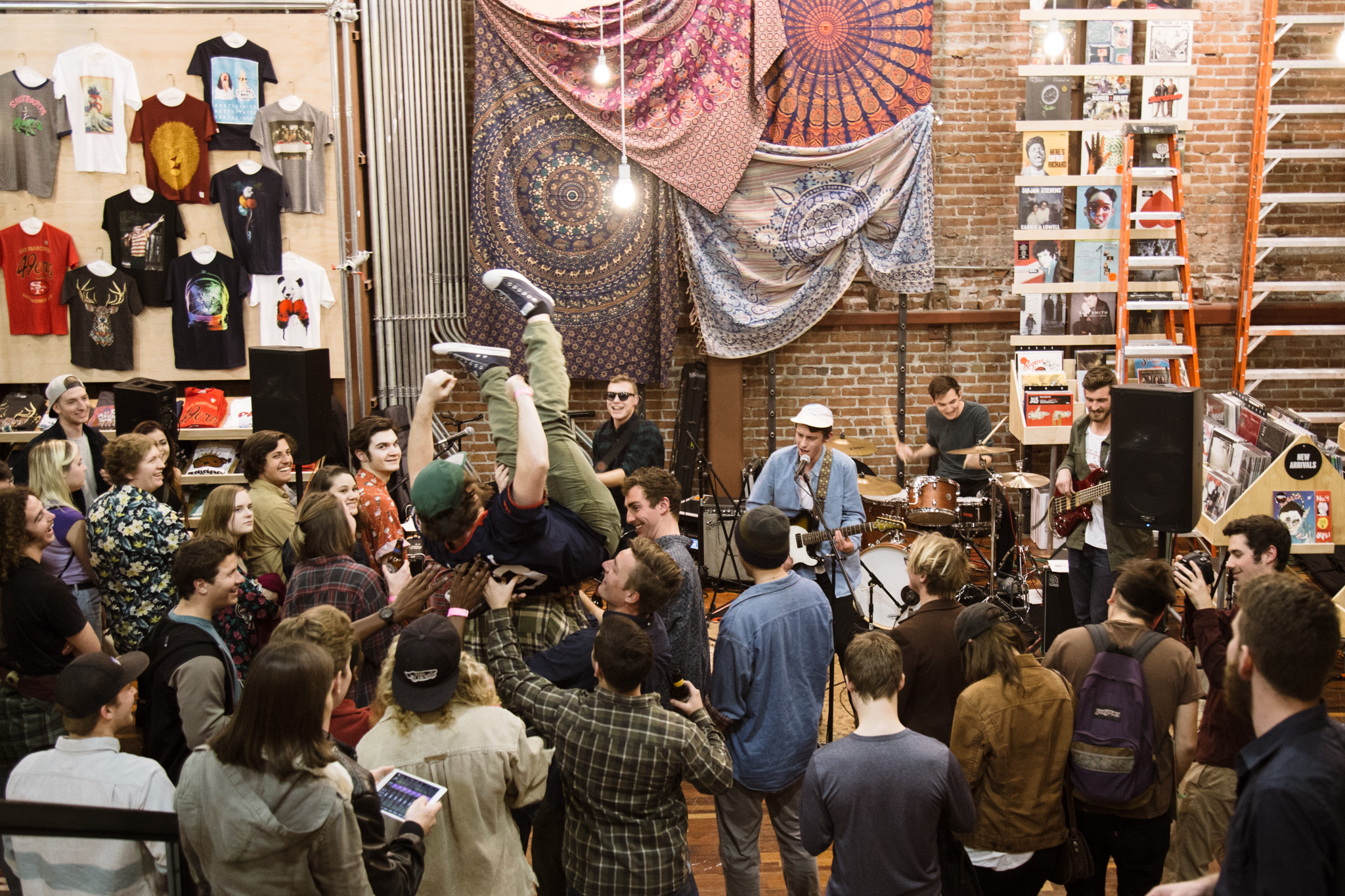 As of January 16th 2016, or somewhere around there, Urban Outfitters has been in San Luis Obispo for ten years. They celebrated their entrance into double digits that evening by putting on a concert with local bands honestly, nothing. and Box the Oxford. The bash also featured free meatballs, French bread, and veggies from Sidecar, as well as a variety of Firestone beer. In the name of dutiful journalistic empiricism, I surveyed the spread systematically and earnestly, took every moment of it to head and heart, and then made my way up to the open, loft-style second story where the bands were to play.

honestly, nothing. took the stage first, dashes of patterned, flowered shirts and shaggy hair on layers of rugs. They’re a band based out of the Central Coast, formed in full at Cal Poly, which, according to Nic Kane and Nickie Gurney, just set the band off. Since they got the full band together, their sound has been changing and morphing, as it is undoubtedly bound to do under such circumstances. They did seem like they were kind of feeling around, finding a sound, but they seemed in no rush to do so. I’m all for it. Their set at Urban Outfitters showed a range of energies they’d be fools not to play around with. At some points they sounded like a strain of surf punk sunk under water; at others they embraced a heavier, grungier feel. At some points it sounded like Kane’s voice could front a swing band; at others you could pick up on bright spots of Smiths’ influence. At some point drummer Matt Noyman took his shirt off, which I was told later was all but ritualistic. The dude earned it. Cameron Kao’s bass was freaky and full. At the exact time I dipped out to Bello Mundo for a minute (the free beer, man), I was told honestly, nothing. just kind of fell into a tear-jerking cover of “Ziggy Stardust” without a word. I imagine they didn’t need to say anything. From what I gathered, they seem to be a band that lets the music do the talking, and I imagine they’ll have much to say now that they have some momentum behind them. Some real kreecher ish.

After an intermission of about a half an hour, the crowd filed back upstairs in a damp cloud of coffee, cigarettes, and marinara to watch Box the Oxford, another band out of Cal Poly (learn by shredding). They featured a spacier, more conceptual set that displayed remarkable musicianship and organization. Songs flowed into one another in true long-wave post-rock fashion. Their poppy, beachy sound was received with dancing and crowd surfing, which apparently you won’t get kicked out of Urban Outfitters for. Below Andrew Krippner and Colton Stapper’s bright, tight guitar parts and vocal harmonies, Eric Osborn just rolled around his drum kit. He and bassist Davis Muxlow held it down. And, man, even down to the deliciously assonant name, the band flowed—there was such a deliberation to them, and so it was interesting when they played their closing song, a jam they’d finished just the day before. Here they seemed to break from the more polished, technical sound they were employing before in favor of a thornier, more dynamic one that really popped. It truly captured the character they’d been getting at the whole set. I look forward to what they can get together with more than 24 hours on their hands.

Both honestly, nothing. and Box the Oxford—this being their third and second show, respectively—seemed to be playing around with their sounds, and I don’t expect they’ll settle into anything too definite too soon. At their best, in my opinion, they were too organic to settle into anything; honestly, nothing.’s Nic and Nickie, and Box the Oxford’s Colton, who I had the opportunity to chat with after the show, each touched on how they were just enjoying the music and enjoying the show. And you could tell it by the big, awesome, dopey smile that never left Colton’s face during his set, and you could it tell by the way the honestly, nothing. crew hung out right up front to see Box the Oxford. Thus, I extend a hearty thank you to Urban Outfitters for the free suds and the opportunity to see these local acts just get off. Here’s to ten. Good luck with the rocky self-semi-consciousness that’ll have you reeling in your own deconstructed skin in like two years. Let’s get some house shows going, folks.

A look into Cal Poly theatre and dance’s “Twelfth Night, Or What You Will” production