Edward Lodewijk Van Halen, the legendary guitarist for Van Halen that blew the minds of listeners with his majestic ability to make a guitar scream in unheard-of ways passed away at 65 on the morning of October 6, 2020.

Eddie Van Halen (EVH) was instrumental in reinventing the guitar through the technical modifications he made to it and his distinct and enthusiastic playing style. His contributions to music have transcended the rock genre and his generation.

EVH was a tenacious tinkerer and experimenter that tried just about anything to become the best at his craft. This included piecing together a glorious monstrosity of a guitar he called the “Frankenstrat.” His creativity, ingenuity and knack for engineering are manifested in this guitar.

EVH attempted to combine the classic Gibson guitar sound with the functionality and structure of the Fender Stratocaster. He added modifications such as a Gibson PAF humbucking bridge pickup and Floyd Rose tremolo so he could expand the usage of the whammy bar.

As if the guitar didn’t have enough slapped on it, he threw many reflectors on the back to have more fun with lights at live shows. 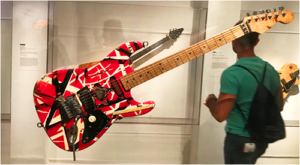 EVH also popularized “tapping,” a playing technique where a string is fretted and vibrated in a single motion of tapping with either hand. This is different than the traditional method of fretting with one hand and picking with the other. He explains it himself better than anyone else.

Italian guitarist and physician Vittorio Camardese made it his style in the 60s. Jimmy Page of Led Zeppelin hinted at the technique in the mid-70s. Still, EVH mastered the process and revolutionized the rock guitar with his solo in the track “Eruption,” (2:30-6:05) released in 1978.

Not only did he utilize tapping to change the guitar forever, but EVH used harmonics to diversify the sounds he could make with his guitar. A great example of his harmonic usage can be heard at the beginning of “Mean Street” off the 1981 album “Fair Warning.”

At the time of these albums releases, nobody had heard anything on the same level, musically and spiritually. Listening to these game-changers with unsuspecting innocence would be like listening to “Kid A” (2000), “My Beautiful Dark Twisted Fantasy” (2010), “Random Access Memories” (2013), and “To Pimp A Butterfly” (2015), for the first time.

Six years after Van Halen’s debut album, EVH was pivotal in using electronics in their new album “1984”. Not content with only being a guitar god, EVH hopped onto a keyboard and helped construct Van Halen’s biggest hits, “Jump” and “Panama,” with wild and eccentric frontman David Lee Roth.

EVH’s constant innovation made Van Halen the most successful band of the 1980s, with “1984” striking a perfect balance with the MTV lovers and metal-heads. While the band would never quite reach the same level of excellence after Roth’s departure, Van Halen had already cemented themselves as an all-time great band.

Eddie’s ability, dedication, determination, and resourcefulness have created a lasting impact on the rock world and those who loved him and his music. He was one of the irrefutable greats.

The “Great Gig in the Sky” has another irreplaceable talent that will be dearly missed by those who loved him and his music. 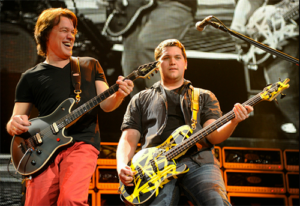 Eddie performing with his son Wolfgang in 2012. (WireImage/Kevin Mazure)

Credit to Youtubers Adam St. James, J. Jallatte, and Zocalo Public Square for their videos included in this article.