The soundtrack for the Class of 2024

In recent years, thrifting has become a much bigger trend. It appeals to those that want to save money, those that have a more retro style and those that are environmentally conscious. A thrift trip is a very fun and inexpensive way to spend a day.

Here in San Luis Obispo county there are many different stores and boutiques for people to thrift at, such as the below spots in Grover Beach, San Luis Obispo and Morro Bay.

The first stop was the always reliable Goodwill. The layout was the most noticeable aspect. Clothing and shoes were to the right and an abundance of home appliances, furniture and miscellaneous items were on the left.

I gravitated to the shoe racks right away. They had a lot of shoes with no clear organization to them, so it was more of a trial-and-error search for the right size.

Onto the clothing… unlike most Goodwill stores, there were no big signs to designate what types of clothing were located or indicating price.

A lot of the clothes were more eccentric. I honestly found a decent amount of things at this Goodwill, such as a heavy amount of animal print, bright colors, and bedazzled garments.

There were some pretty good finds in the appliance area too, such as espresso machines for less than $20.

This is also a good place to hit up when trying to find a halloween costume this year given the three racks designated to different costumes and accessories. 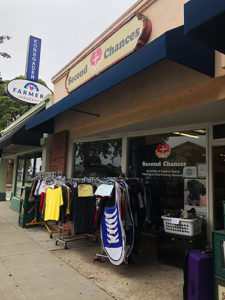 The prices were decent and within normal Goodwill ranges, about $4 shirts and $8 bottoms.

The next location is a tiny little charity shop with very good deals and was an impulse decision. I found Second Chances looking for parking on W. Grand Avenue.

There is a small selection of clothing but it still had quality finds. There was definitely more feminine clothing than masculine and this is the place to go for jewelry and accessories. They had a lot of hats and belts for $1 each.

The prices here were terrific. I bought seven items and I only spent roughly $12. The workers were very kind and ended up giving me a discount on a couple of the shirts purchased. 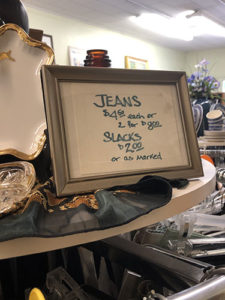 On the same street as Second Chances was Grateful Threads. This was an interesting mix of clothing that I would honestly consider more vintage shopping than thrifting. The boutique has a cute interior and the clothing was very organized.

Their denim section was sublime. I found vintage Guess jeans and Levi’s 501s for roughly $20 that were in really good condition. Jeans like that are rarely that affordable. I would definitely go back to this store to try my luck with the denim section again.

In the back they had a selection of vintage wedding dresses and ball gowns for good prices.

However, it is also very important to note that the workers were not wearing masks. I would recommend this shop to someone but I might tell them to wait until the pandemic calms down.

Finally, I went to the super cute and eclectic California Cool Thrift Store. Although it is organized and similar items were in designated places, it was a little messy. If you’re looking for something specific you may have to search for a while.

The prices are modest and the range in items is huge. This is the place to go as a one-stop shop if you have a large list of items you are searching for.

The next area was Morro Bay since I had heard some good things about the thrift stores in this area. The first store I stopped by was The Good Flea which was really cool. 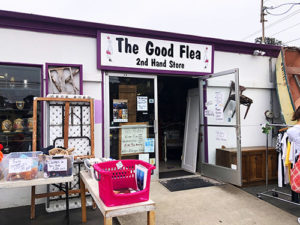 Outside the front door was a rack of graphic tees for 50 cents each, however the rest of the clothing section is pretty limited. There were a few pairs of shoes, a few nice leather jackets and some men’s pants and shorts. The prices seemed reasonable.

The furniture is what really caught my eye. This is the place to come if you’re looking for furniture, household items and books. There were two incredibly nice, old couches that were decently priced and some lovely desks and clothing drawers.

This was a tiny little store with some great finds. Near the front were baskets of nice vintage bathing suits and there was also a sizable selection of men’s graphic tees and jerseys.

The most abundant category of clothing, however, were pants. I found two pairs of brand new Dickies women’s pants for $10 dollars each and my friend ended up getting a really nice pair of khaki pants for $1.

Something else that should be noted was the amount of good quality leather jackets and bomber jackets they had. The prices were reasonable, not the cheapest, but definitely still a good deal. 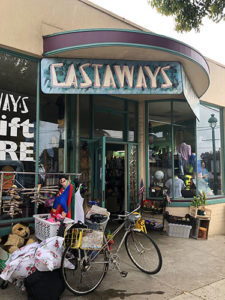 The last store in Morro was Castaways. Now, when I said early that previous stores were messy or unorganized nothing compared to this. There weren’t sections of clothing, just racks with everything hung up. Although it was hard work to look for things, it was worth it.

I ended up finding some really nice sweater vests, jackets and band tees. There was an abundance of Smith’s t-shirts and other classic 80’s band merchandise.

There was even a section of abandoned film and printed digital photos with a sign saying “Don’t like your family? Buy a new one! Photos – 50 cents each.” This store was much quirkier than others. The owner was very nice and his kids were very talkative. 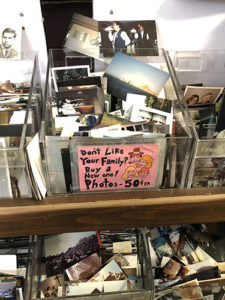 The last few stores were in SLO. I decided to go to the Goodwill on Higuera, which I have been to  before and each time the trip is successful.

They have a good selection of clothing and household items. What really stood out, though, was the large collection of halloween costumes and spooky makeup.

Behind the costumes are the shoes, which I have always been pretty successful here. I ended up scoring a cool pair of black sandals for $3.50.

Moving onto the clothes: there are so many options of skirts, shirts, and sweaters. The style at this Goodwill is definitely more basic and I haven’t ever found anything that really stood out. The prices are the basic Goodwill prices, which can start to rack up depending on how well you strike out.

The bins are so freaking amazing! They follow the more traditional European thrift store pricing —  paying by the pound — making everything extremely affordable.

There are about two or three bins in different areas that have a certain type of clothing category in it. Here, you have to work pretty hard but the reward is worth it.

The final store of the day was the United Voluntary Services Thrift Store. The prices here are super cheap because all of the workers are volunteers.

The store is packed with clothes and some unique, fun items. They have a good selection of sunglasses, jewelry and other accessories. The lady that was working was really nice and gave us a discount on certain items we were buying, even though the prices were already dirt cheap.

Overall, the two places that should definitely be on your list of thrifting spots to hit up would be the Goodwill Bins in SLO and Second Chances in Grover. There is something for everyone at The Bins and the activity of digging to find treasure is always enjoyable. Second Chances has awesome prices and is a good spot to just quickly pass through because it is so small.

The community has tons of great thrifting opportunities. Especially now, it is important to shop local and support smaller businesses. If you are looking to update your wardrobe or rebrand your style, thrifting is an affordable and sustainable way to do so.

SLO-cals are awaiting the return of Fred & Bettie’s