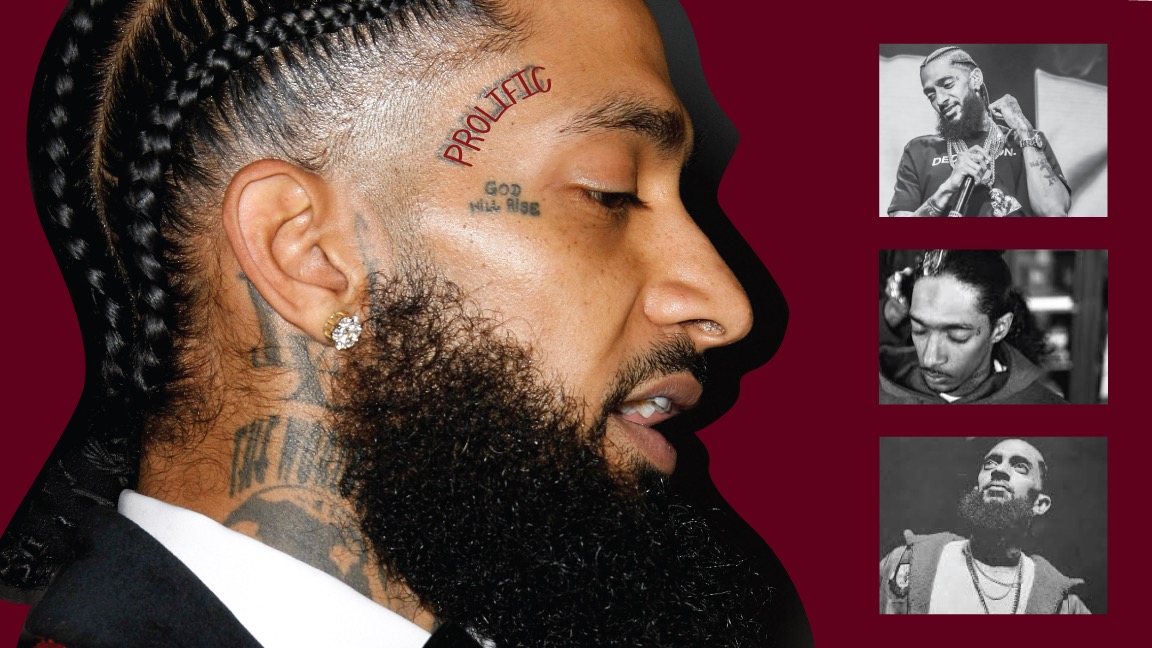 If there was one artist that embodied “the rose that grew from concrete” metaphor, it would be Nipsey Hussle.

Except perhaps Nipsey is not a rose, but a violet.

A violet, once matured, has pods that burst open and disperse seeds throughout its surrounding area.

Nipsey spent his life planting his seeds all throughout the rugged streets of South Central Los Angeles, transforming potholes into gardens.

Nipsey was spending his last hours picking up merchandise from his Marathon Clothing store to freshen up his lifelong friend that just finished a 20 year prison sentence. His store can be found in a plaza on the corner of Crenshaw and Slawson, and Nipsey chose this location because it’s where he started his career, selling mixtapes out of the back of his car. Tragically, it would also be where his career ended.

On his way out, he was shot six times and would later die in the hospital.

This last charitable act to help his friend get on the right path was a microcosmic look into a life dedicated to giving back to LA and using his influence to create opportunities for those struggling in his community. While professional PR teams may be behind the donations that celebrities flaunt in order to earn the good graces of the public, Nipsey’s philanthropic deeds were different. Nipsey was set on creating tangible changes for inner city kids and being a man of the people.

Nipsey became Los Angeles hero, and every hero has an origin story.

When Nipsey was 16 years old, he decided that the violent and gang related lifestyle he grew up in was not what he wanted for his future. He pursued music instead, and in a time that predated internet virality, he had to market himself.

In an interview with World Star Hip Hop, Nipsey recalls that buying studio time meant he had to budget his money, so he set himself on a 20 dollar daily allowance to save for his mixtapes.

Once these mixtapes were recorded, he printed posters with his mixtape cover art and drove around LA stapling the posters to telephone poles. He sold his mixtapes out the back of his van on the corner of Crenshaw and Slawson, the local hang out spot for people in his neighborhood.

As Nipsey’s career began gaining momentum, he had the freedom to change his marketing techniques. The day before the drop of one of his most critically acclaimed mixtapes Crenshaw hit streaming platforms, he sold 1,000 hard copies of the CD at $100 each. With the purchase came an autograph, ticket to a live performance, and a phone call with Nipsey himself. The CDs quickly sold out with the help of Jay Z, who caught wind of the rapper and bought 100 CDs himself.

By the time Nipsey dropped his debut Grammy nominated album Victory Lap, Nipsey had gained fame and fortune that he was determined to put to good use. He bought the plaza that he started selling mixtapes in and opened up his Marathon Clothing store which strictly employed members of his community. He had started plans to build a 6 story residential complex on top of it that would reduce housing costs in his neighborhood.

Nipsey knew that while his dream of becoming a rapper had been fulfilled, not every South Central black kid had the same dreams. He encouraged diverse success, and created a program called Vector 90 that would help kids interested in STEM research build their skills and connect them to corporate offices in Silicon Valley. This would largely address the lack of diversity in tech fields and provide opportunities that would otherwise be unattainable in his community.

Nipsey supported art of all kinds, and this was evident in his project Destination Crenshaw, which was a 1.3 mile long open air art exhibit that featured rotating pieces by black artists and creators. Harrison Dawson, a program manager of Destination Crenshaw, said that Nipsey built this exhibit “because he believed that in order for us to have the kind of community that we deserve, one that’s reflective of the best, we have to own it and we have to do it ourselves.”

Even the minute details of Nipsey’s philanthropy speak volumes to his character. He bought shoes for every student of the nearby Hyde elementary school. He owned multiple restaurants and fish markets in LA that helped the local economy and promoted black entrepreneurship. He donated his money to help family’s funeral costs if they lost a loved one to gun violence. And, most tragically, he was scheduled to meet with the chief of LAPD to discuss ways in which the city can help reduce gang violence the day after he was gunned down.

Nipsey Hussle was Los Angeles. It seemed like he did everything the way you were supposed to. Instead of leaving his home after attaining success, he stayed in the community to help rebuild it. All of his business ventures were stationed in LA, and countless stories have come out that highlight how pure Nipsey’s heart was before it stopped beating.

The number of celebrities that publicly mourned the death of Nipsey speaks to how much of an impact he had. From fellow rappers to mayors and politicians, from the LAPD to the LA Metro, from professional athletes to talk show hosts, from actors and actresses to employees of his businesses, everyone had nothing but positive things to say about Nipsey Hussle.

With this mourning, many people found themselves asking why? Why did someone who spends their whole life putting good into the world meet such a devastating and abrupt end? The reality is, maybe there is no answer, and it’s a reminder that life is random, short, and unforgiving. But with these cards that we are dealt we should all aspire to follow Nipsey’s legacy and do the most for each other and our community before we leave it. These impacts will live on past our death, and in turn, so will we.

There is a saying that everyone dies twice: once when they stop breathing, and once when their name is mentioned for the last time. Nipsey may have passed, but his impact and commitment to better his home will never be forgotten, and he has inspired a whole generation to follow in his footsteps.

Nipsey’s life was short, but it was a beautiful one, spent in the most positive way he could. The world is a better place because of you, Nipsey Hussle. Thank you for that.

Taylor Garvey is a Cal Poly journalism junior and a KCPR staff member. He wrote the article. Image credit to Tatiana Edell.