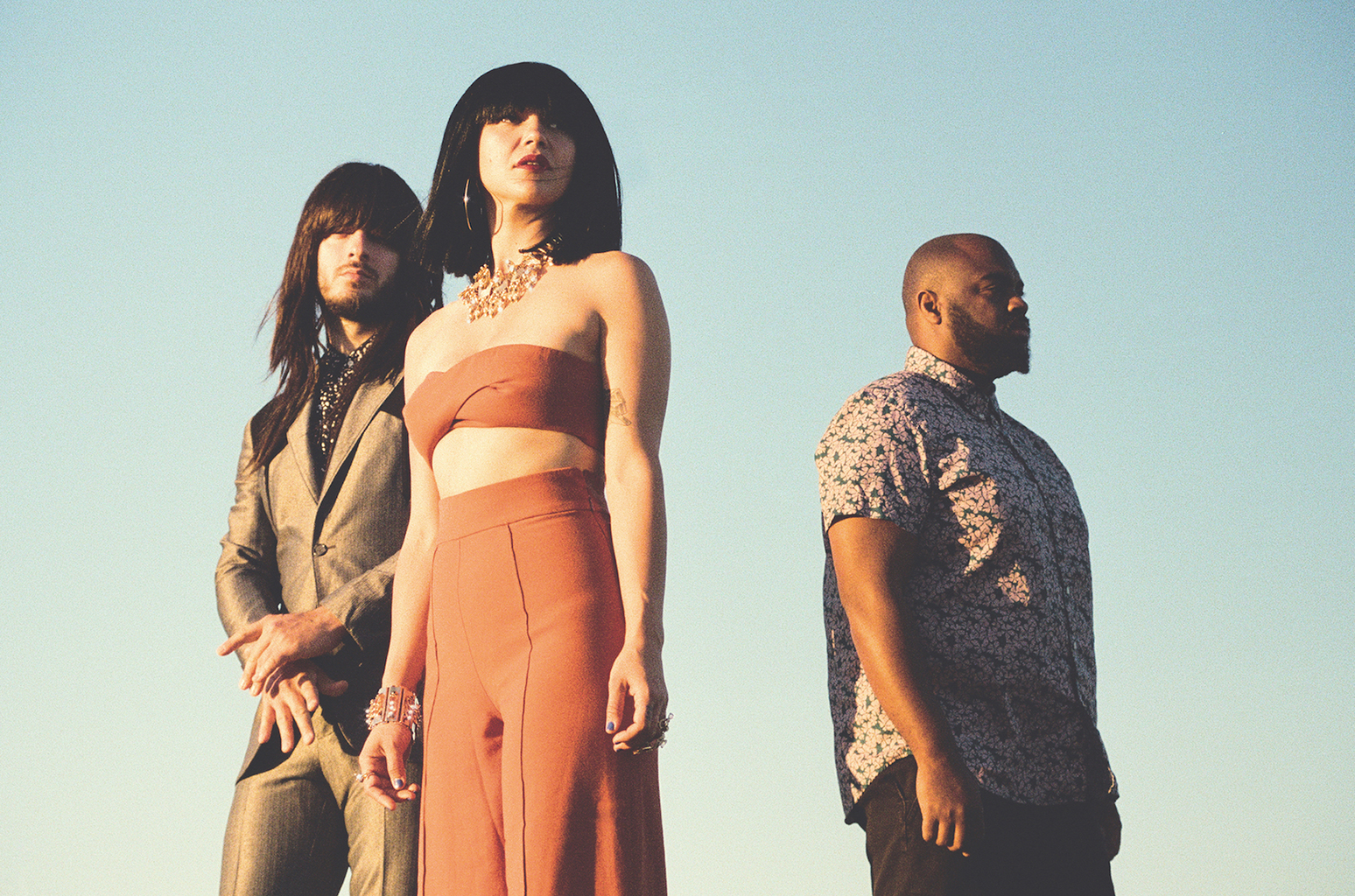 Eating Cheese Puffs with The Memories

Khruangbin and I spoke on the phone as they waited for their tour bus to be fixed in Las Vegas, NV.

The band is currently on tour promoting their new album, Con Todo El Mundo. You can listen to the album’s lead single, “Maria Tambien,” here.

Jaya: I wanted to start by just asking you guys about the name — Khruangbin. What does it mean, where did it come from?

Laura Lee: So, Khruangbin means airplane in Thai … we named ourselves that because we were listening to a lot of ’60s and ’70s Thai funk when we started the band.

Then we started playing music and didn’t really set out to sound like anything in particular, but when we listened back to the recordings, we could definitely hear the influence of that Thai music, so we named ourselves “airplane” in Thai, as an homage to the influence.

J: It’s a great name — do people ask you how to pronounce it all the time?

LL: Yes. It’s a whole thing at all of our shows, kind of. We have people say it with us, and we get called something different every time… it’s always fascinating.

LL: Khrunj-bin is a recent development and it seems to be really resonating.

J: You said you didn’t really set out to make a specific sound, but it’s kind of come together into this unique sound. Do you guys have a way you describe your “genre?”

MS: We’ve tried being more specific, and at this point, we say it’s kind of chill-funk… it’s kind of melancholy; that totally glosses over all of the influences, but most people won’t get those influences. It’s dreamy, kind of surfy.

LL: We get like a “Quentin Tarantino soundtrack” all the time. I think that’s… not what we set out to be, but it gives people the idea of sort of the notes we hit.

J: What are your primary influences, and how have they changed between The Universe Smiles Upon You and now?

LL: They’ve changed a lot. I think it was that particular summer that we wrote a lot of the original Khruangbin material. We were listening a lot specifically to Thai music, because we uncovered a big treasure trove of music particularly from that area.

Since then, we’ve spent a lot of time together on tour in a van, where somebody is DJing from their phone, and that has opened up the world of influence to all kinds of places. So for our upcoming record, it’s a different world.

I started finding a ton of funk and soul music from the Middle East, including Turkey, Israel, Iran, Egypt, and further west, like Northwestern Africa, the Mediterranean, Spanish funk and pop music.

J: So, you spend a lot of time seeking out “world” music and drawing upon all of these influences. How do you proceed from there with your songwriting process?

LL: Well, we have a formula that works for the most part when we’re writing one-hundred percent new material. Mark made me a bank of hip-hop drum loops…

MS: Basically breaks, from various eras, that would’ve been used as a bed for early hip-hop production.

LL: I’ll pick a drum loop and sit with that drum loop and write a bassline. If I want to be inspired by something, I’ll listen to whatever is inspiring me that morning, and it will subconsciously influence what I play that day. I’ll just write to these breaks, then Mark will write on top of that, and we’ll send it to [drummer D.J.].

MS: Then he takes them, and changes it up and make it his own, and we meet up together and play it all at one time; we arrange it in that moment, and make it happen!

LL: If, and only if, the song feels like it needs another layer of “oohs” and “aahs,” then we’ll add another layer. But that’s the KB formula.

MS: I generally put percussion tracks after our main parts are done; just some congas or shakers to add a little extra pizzazz to it.

J: So, you spend time with these tracks individually first, and then collaborate. Has that always been your style?

MS: It works really well for us, because we have time to marinate on these parts and refine what they need to be. Once we’ve done that, we get together and we play them live.

Everything is recorded live.

LL: It allows us to each put our individual stamp on it. Then, when we come together to record and play it, there’s a real rush of-

MS: Immediacy, or spontaneity. You know the tune, but now you’re playing it together as a band for the first time.

LL: Then you can hear the spontaneity or hear the joy that happens, because we’re coming together to make our salad or stew.

J: When you guys spend that week together recording, do you have any specific rituals, be it clothes that you wear or things you need to do to make it come together properly?

MS: Usually it’s really cold when we record, so we have little space heaters at our feet, and we build little forts out of mic stands and blankets to put our feet in because it’s just in a big drafty barn; we just love playing there!

For some reason, we prefer that over a comfortable, climate-controlled, isolated, perfectly-acoustically-dead recording studio.

I’d rather record in the barn. It’s cold, but it’s fun.

LL: The only other consistent thing is the wave of snacks and drinks; coffee in the morning, a wave of hummus and carrots…

LL: Sesame sticks. Then another wave of coffee, and then everyone kind of reaches a point of needing some time, and I’ll make some dinner and we’ll cuddle up and go to bed, and make a fire.

MS: Make a fire! Watch cheesy VHS movies that are at the barn.

J: I want to ask about your new single, “Maria Tambien,” and about the video in particular, which pays homage to Iranian women working in the arts before the revolution. Where does that idea come from?

LL: We started to listen to a lot of Persian singers; Googoosh in particular. We worked with a Persian creative director to make the video, and she initially had this idea of, because it was Middle Eastern-inspired in general, paying homage to Persian people. And because the title was “Maria Tambien,” Persian women.

We were trying to show America a side of Iran that you don’t see, because everyone has this image of what that part of the world looks like. She knows through the nostalgia of her family what Iran looked like before the revolution, and wanted to show that story of Iran. The initial idea was just to have clips of Persian women dancing, and cut them up to the song.

It was a really heavy thing to happen; it was every single of them. In the video, these women, they aren’t lost or forgotten, they just can’t be in their country anymore.

So the idea is that the narrative changed, and we wanted to show that side of Iran, but also, tell the story of their history, and what happened to them.

J: How do you imagine that people listen to your music?

MS: A lot of times, we don’t have to imagine because they’ll just tell us.

LL: There’s a lot of cooking, studying, gardening, taking a bath. There’s also really heavy stuff; I met a woman a couple of nights ago who said that she works in the ER and they put our music on during surgery, which is far out, that there have been people giving birth to Khruangbin.

MS: There have definitely been people making babies to Khruangbin as well.

LL: So I hope that it happens in a variety of ways, I think that’s the nature of instrumental music. It becomes a palette for whatever your mind wants it to be.

Jaya Narasimhan is a KCPR and Cal Poly Graphic Communication alum.  She handled the airwaves as DJ Teen Wolf and conducted this interview. Picture obtained from Billboard.com (link).