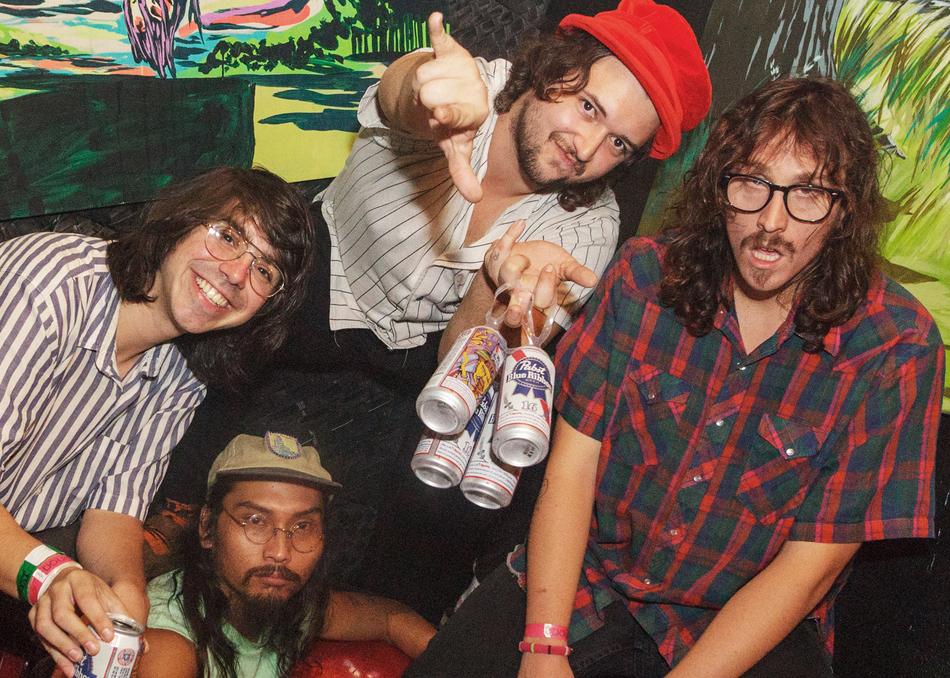 An Interview with Walter Etc.

Last year, Shabang IX brought us face to face with one of the most iconic lo-fi stoner rock bands of the 2010s: The Memories.

I was blessed with the chance to speak with the guys of The Memories after their performance last Saturday. We hung out and chatted about their upbringings, discography, Southern California fast food preferences, various musical projects, and spooky halloween plans.

Rikky Gage aka Big Rick, is the lead singer and energetic frontman, joined by Unkle Funkle on guitar, Izak on bass, Jerry Rogers on drums, and Lucas on electric guitar. Having listened to their 2013 album, Love is the Law, through and through countless times, I had to mention my fandom.

The following is an edited transcript of our conversation:

Lucy McNeil: I’m actually a long time fan of yours’. I would listen to Love is the Law all the time when I was eighteen and nineteen.

Rikky: Love is the Law is such a classic record. It hit right when the Burger Records scene was really hyped out. Love is the Law came out, and it’s such a good little lo-fi record, so sloppy. It’s funny, I listen to it now and remember thinking, “I could never dream of releasing songs in this way.”

Now I couldn’t not dream of releasing songs like that. It’s perfect. I hear that a lot from a lot of people. We just put out our eighth LP, but I think Love is the Law is a stand-out crowd favorite. It came out when a lot of kids were in middle school and high school. Kids have told me, “thank you for saving eighth grade for me.” (laughs) I’m glad. No one saved eighth grade for me.

Rikky: Yeah, it’s twenty-eight songs. The first song we wrote without anybody’s input. Then each song was commissioned by fans who contacted us and wanted songs written about them and sent to them. It’s an LP now.

It took a while to make. One of the songs was supposed to be about a baby being born, but by the time we finished it, it was about to turn one, so we changed the lyrics to be about its first birthday. We have two first birthday songs on there. (laughs)

Lucy: And wasn’t your original idea to raise money for a tour?

Rikky: Yeah it was our second time going to Europe, and it was the only time The Memories were headlining a European tour. Usually White Fang does [one of Rikky’s other harder rock projects] because it is arguably bigger in Europe than it is in the States. We headlined a festival just like this in Belgium.

We didn’t plan on releasing it as an LP, but it was so many tracks. And it’s not like me and Izaak went in the other room and recorded it on our iPhones. We recorded it like any other song. But it was nice to kind of write according to certain parameters. Like Madlibs.

Uncle Funkle: Yeah, and when you have an objective, it’s easier be creative around that objective.

Lucy: I’m just curious, because you guys are from the LA area, do you prefer Del Taco or Taco Bell?

Izak: Taco Bell is too expensive. Del Taco has a better value menu.

Rikki: I found my new favorite fast food restaurant and it’s not even in this country. It’s in Sweden. It’s called Mac’s. They have perfect little cheeseburgers, chicken wings. They have a cheese salad.

I’ve also had some of the best falafels in Sweden. It’s so beautiful up there. It reminds me of the Pacific Northwest. We’ve done five European tours with Gnar [Rikki’s cassette label].

Lucy: Tell me about Gnar. I know you guys are originally from Portland.

Rikki: I went to community college, and then went right into living in the city, in Portland, then made Gnar Tapes by myself originally. Then I moved into a meat factory by myself and Funkle joined White Fang and Gnar. We eventually moved to Los Angeles after we had a crazy punk house in Portland called Narnia that was like…so many cool people. So many legends.

Now we’re just doing in on a bigger scale. Gnar Tapes now, we’re putting out all kinds of shit. We put out Fat Tony, a rapper from Houston. We put out Willie Nelson’s son’s lo-fi tape. It’s really good.

Lucy: I was just telling someone that Southern Rap isn’t as popular anymore.

Rikki: I grew up in the early and mid 2000s when Southern rap was the biggest thing on the radio. Atlanta, Houston. You know, like, “Sippin on some Syrup” is from Houston. “The Whisper Song.” (singing) “Three Six Nine, Damn She Fine,” all Southern rap.

My three favorite rap sounds in the world, besides LA and New York City, are Memphis, Houston, and Atlanta. Shit that’s almost punk rock happens sometimes. It’s amazing. I’m a big rap fan. I have a TYBG tattoo on my ankle. DJ Screw, from Houston, he’s the Mozart of rap.

Lucy: What other genres are you guys into?

Rikki: I love Brazilian, Mexican Cumbia, I love fusion jazz. I’ve been getting really into Opera.

Izak: I like a lot of instrumental music. I also really love pop.

Rikki: I have a Britney Spears poster above my bed, but I’ve been listening to a lot of Death Metal lately. I listen to Death Metal pretty regularly, I’d say a few times a month since I was eighteen. I like pretty much everything.

Like, folky floppy hat hippy stuff, which was cool when it was original. I love costumes and stuff but it’s not Halloween enough to be cool.

Lucy: I’ll end on this note then – What are you guys going to be for Halloween?

Rikki: White Fang is gonna be N’Sync for Halloween. Halloween is my favorite holiday but it’s so much pressure for me. We went to Austin, Texas on Halloween once and we all had Shrek costumes. That was fun.

Lucy McNeil is a KCPR DJ and Cal Poly psychology senior. She wrote this article. She handles the airwaves on KCPR San Luis Obispo 91.3 FM and KCPR.org from 12 p.m. to 2 PM on Tuesdays.