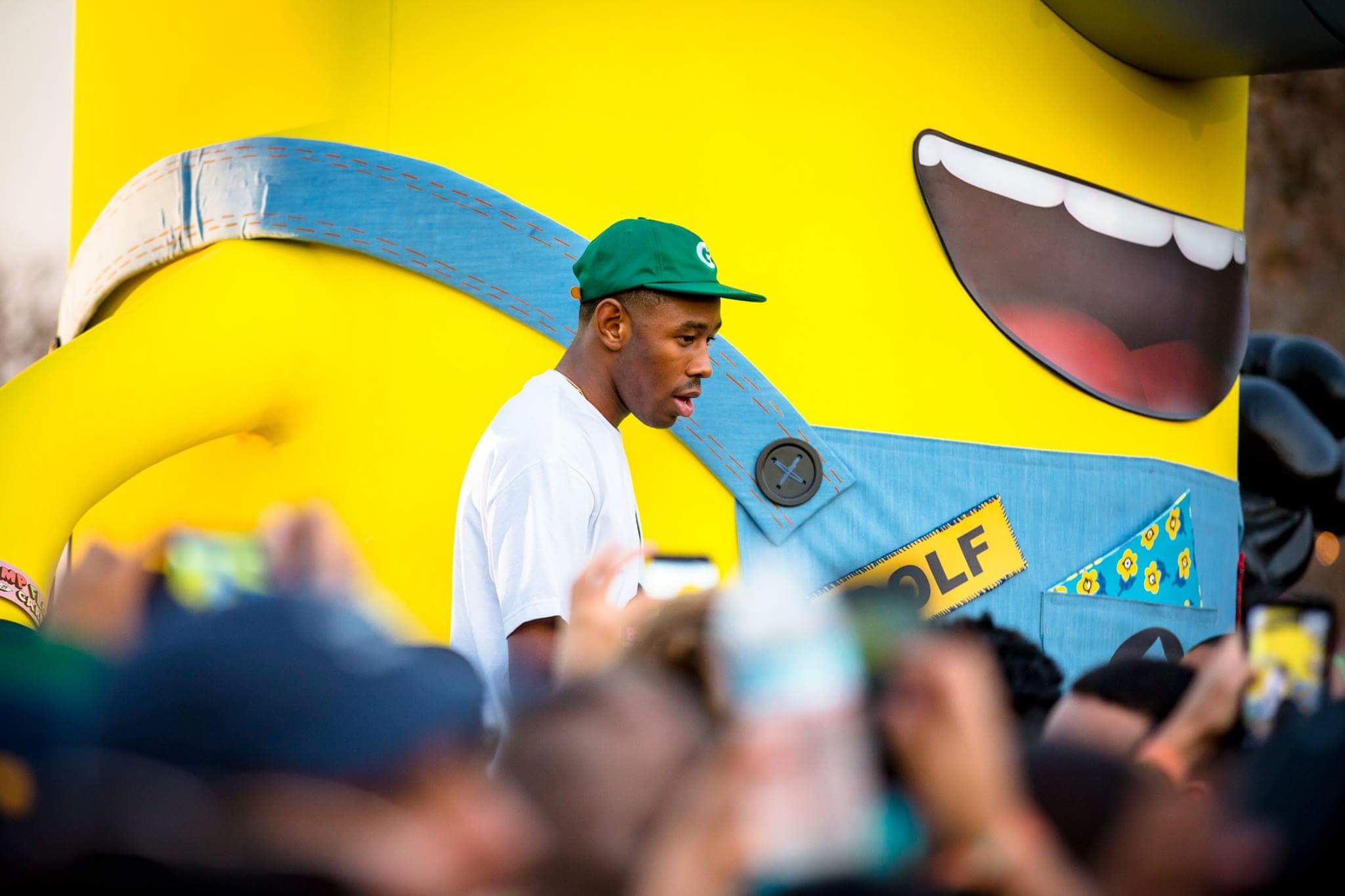 This past weekend, I had the immense privilege of ignoring all my homework and heading down to LA for Camp Flog Gnaw. I didn’t quite know what to expect. It ended up being two days packed to the absolute brim with music and fashion.

What started in 2012 as a one-day OFWGKTA carnival has morphed into the two-day music and carnival extravaganza it is today. Camp Flog Gnaw is a carnival at Exposition Park in Los Angeles, California.

Before I get started on how incredible the music was, let me just tell you: never in my life have I been around so many pairs of black vans and checkered pants. Every single person was wearing something incredible. Commenting on cool ‘fits quickly became redundant once I realized those who were not clothed in some swanky getup were in the severe minority. 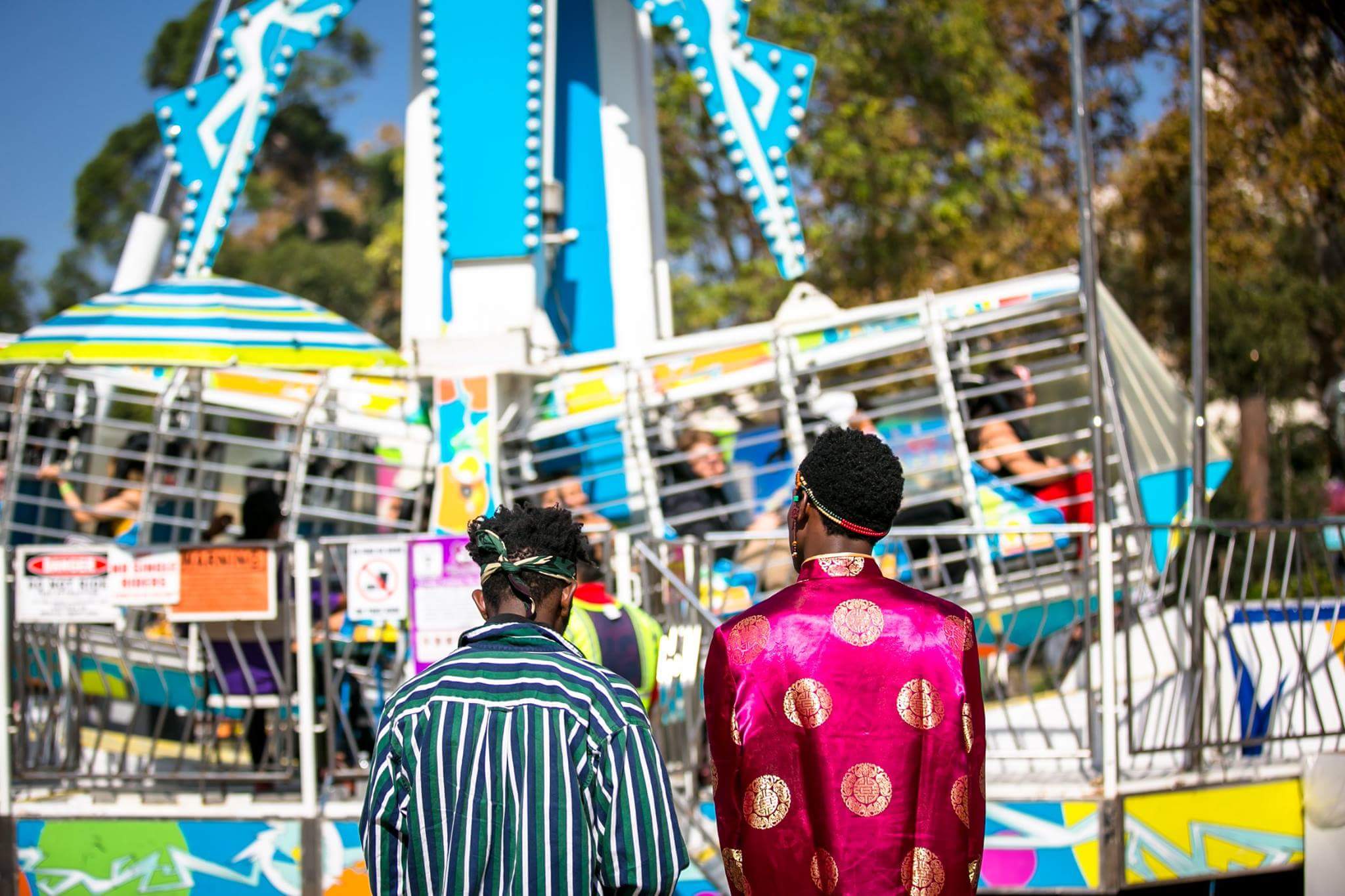 I had never been to USC and therefore had really no idea what to expect as far as the layout of the festival, but it was basically a semi-circle around the USC arena, with the stages on polar ends, and carnival rides, merch, and vendors in the space between. The Camp Stage (main stage) was on a blacktop, while the smaller stage, the Flog Stage, was on a grass field that quickly morphed into a dust bowl. It also had several trees on the perimeter, on which I saw countless festival-goers climb for a better view. The security guards had a really good time coaxing them off the branches, especially when one of the guys in the tree bounced on a branch that consequently snapped right out from under him. He held onto the bottle of Hennessey like a champion despite the fall.

Being the lineup as it was, both Saturday and Sunday were packed with one excellent set after another. I was giddy off carnival rides and mosh pits all weekend. These were some of the standout acts.

Saturday, after several hours of driving, my friends and I emerged from the Prius and went almost immediately to The Garden’s set. Fletcher, one of the twin brothers who compose The Garden, was sporting a tight sleeveless turtleneck, dangly earrings and a beautiful necklace. He took up just a small fraction of the main stage behind the drum set. His brother, Wyatt, wore yellow motocross pants, a leather jacket, and a cowboy hat. He covered the remainder of the stage, pacing and romping throughout the whole set, occasionally dropping the mic and running a few figure eights. Just as their music, they were absolutely bizarre, and I loved all 45 minutes of it. 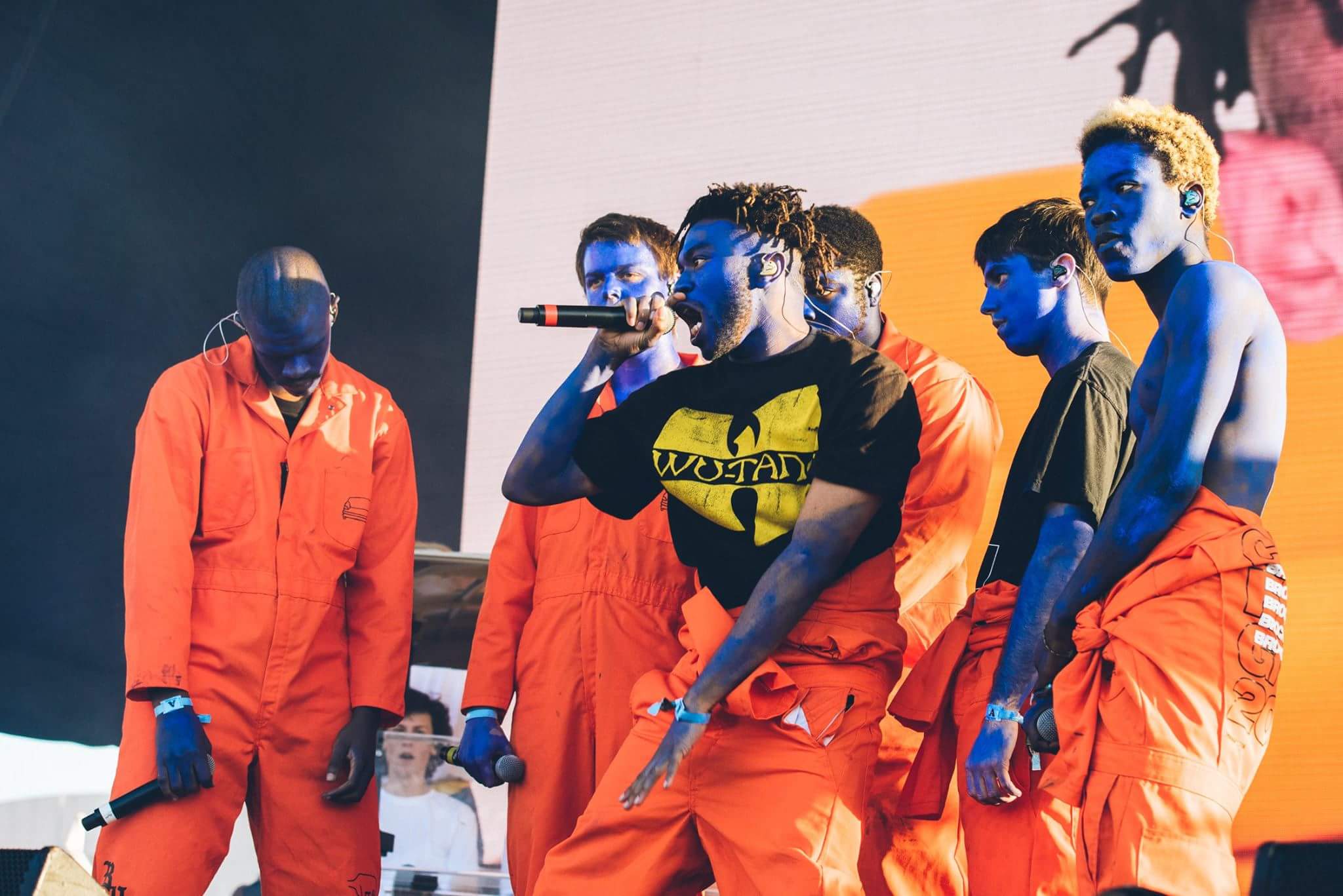 Brockhampton was later that afternoon. They came out on golf carts, painted blue and wearing orange prison jumpsuits. They launched into “Heat” without skipping a beat. By the middle of the second song, the blue paint had already begun to run down their faces from the sweat. They played 8 songs, stemming evenly from their albums Saturation I and Saturation II. You can tell the amount of thought they put into the whole production, and their excitement shone through the little personas they adapted to during their performance. During some songs, certain mics had lower sounds than others but it didn’t necessarily detract from the performance. It was simply not long enough.

I could go on forever about how great everything was. Often, you hear about artists being too drunk to perform well, sound issues, fights, bad security, and things of the like. However, none of these applied that weekend. Every artist was on their A-game, and the crowd supplied the necessary hype during every set. One disappointment: Rex Orange County had to cancel because his visa expired and he could not make it into the country to perform.

Tyler, The Creator’s set was something I have fantasized about since my middle school days, and to finally see him live was a dream. He somehow pays attention to every single detail, while remaining completely natural. Seeing him onstage looking out onto thousands of fans, loving the production he works so very hard to throw every year, made me feel such respect for his hardwork and diligence. He played songs mainly from his latest album, Flower Boy, and it was dumb lit. 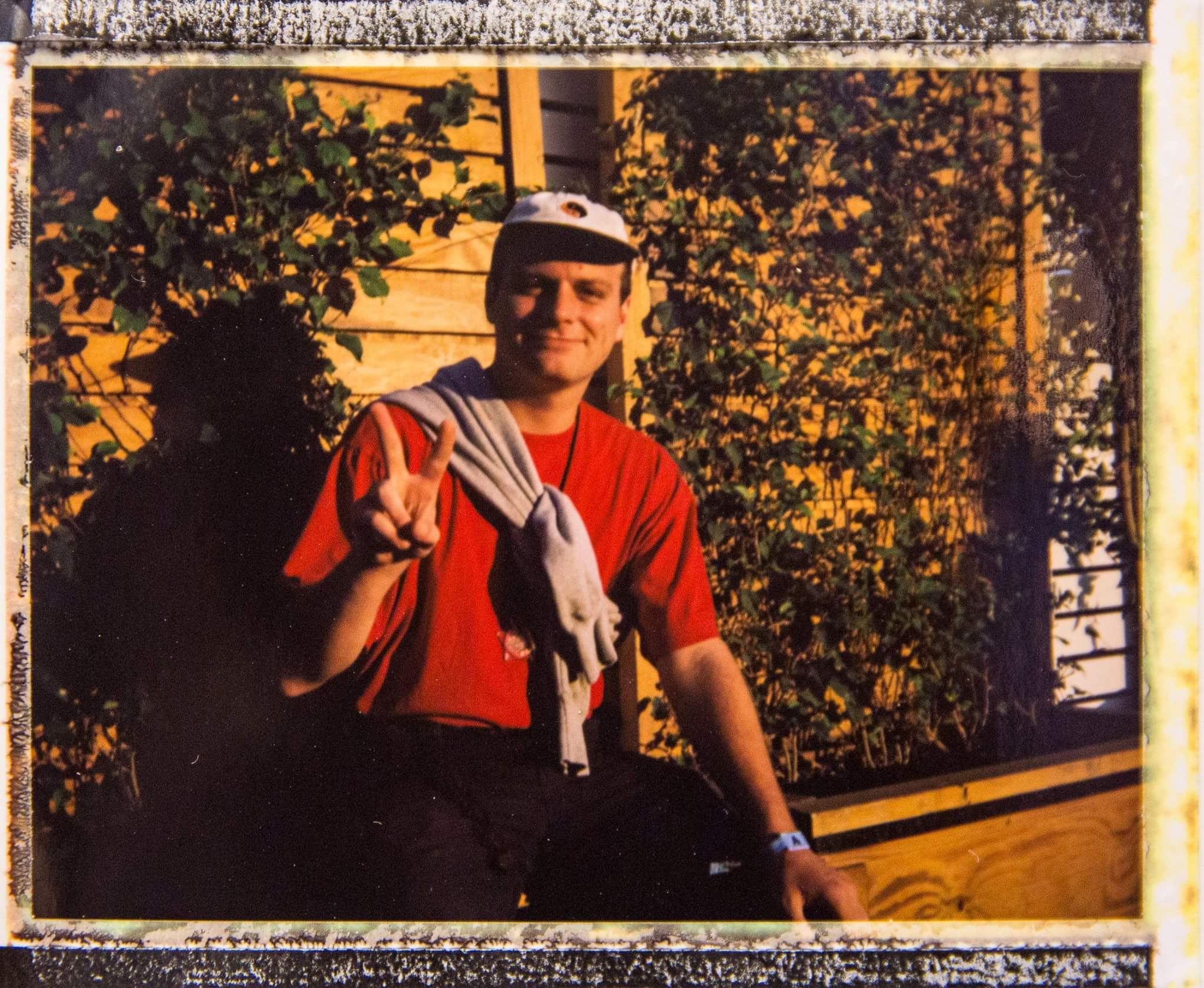 The special guest was none other than Mac Demarco, who attracted a massive crowd despite the short notice. He simply floated around the stage as the sun set behind the palm trees. He mainly played songs off his latest album, sending melodic synth vibrations outwards onto the thousands of us swaying in the crowd. Someone offstage gifted him a cooler packed with beer, so naturally, he cracked one open as he continued the set, and even cranked out a few somersaults for us. There is not one single thing about that man to disagree with. More surprise guests this weekend included YG, Ty Dolla Sign, and G-Eazy.

We saw 17 full sets of music in that short two days. The last one we saw was 2 Chainz, who played at 10:30 pm on the smaller stage Sunday night. 2 Chainz has always been one of those people who I’ve known and liked for quite some years now, but rarely go out of my way to listen to. However, his set changed my whole perspective. Firstly, the man rolls out in a wheelchair, being pushed by background dancers. He opened with two bangers off his latest album, Pretty Girls Love Trap Music.

In a break between songs, he explained he broke his leg a few weeks ago and had to have surgery.

The nurse told him he would be unable to perform at Flog Gnaw seeing as though he was too weak to even walk, to which he responded, “Bitch, you crazy!”

Myself and the rest of the crowd responded to this by tossin’ our two’s in the air and screaming “Truuuueeeee!” It was evident he was unhappy about being in a wheelchair, but was in high spirits nonetheless.

He also had an entire gospel choir, the Trap Choir, singing backup vocals over his songs. It was a truly beautiful production. My heart swelled. He was gracious, hilarious, and didn’t miss a single syllable in any of his songs. I never wanted it to end. For his last song, the dancers helped him out of his chair, so that he was able to stand for the finale. We had to miss the headlining act, Kid Cudi, to begin our long journey home, but I wasn’t the least bit upset. 2 Chainz was the best way to end the weekend.

After a long 48 hours of minimal sustenance and lots of exertion, we stopped at In-N-Out on the way home to fuel up before the drive. We were tired, dusty, and hungry, with four hours of travelling awaiting us after the milkshakes and fries.

It was there, under those fateful fluorescent lights, that I had a brief and awkward conversation with Syd, the lead singer of The Internet. It was awesome.

Olivia Peluso is a KCPR content contributor and takes over the airwaves from 6-8 AM Friday mornings. She is also a Cal Poly English sophomore. She wrote the article. All photos by Goldenvoice.