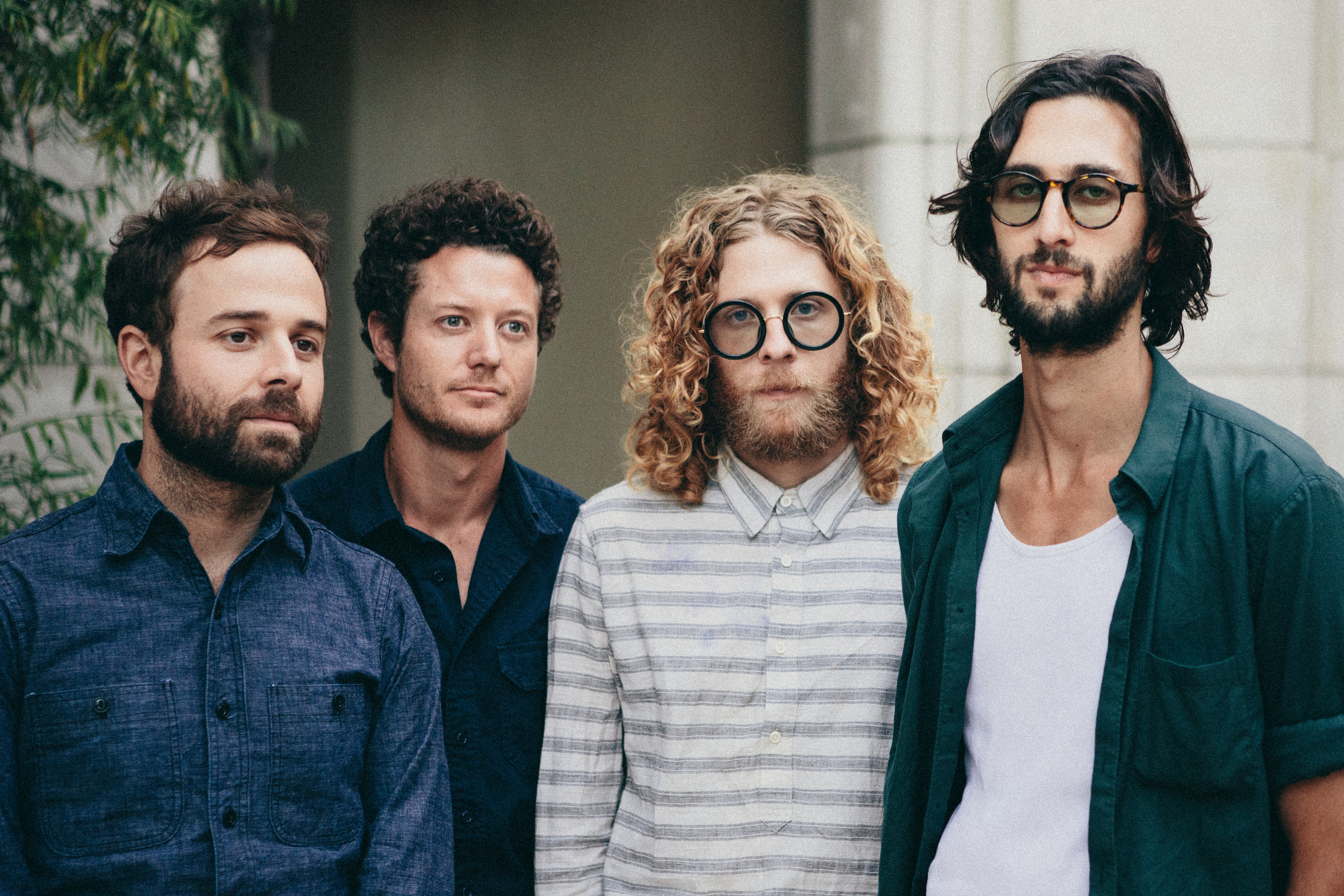 Why a Donut Shop Makes for Good DIY

I recently had the opportunity to interview Griffin Goldsmith, the drummer of the Los Angeles-based rock band Dawes. 2016 was a big year for the band. They released a new album, played on Charlie Rose and sound-tracked a Hillary Clinton campaign ad.

With a tour that began this month, they look to be busy. Over the phone, I asked Griffin about sibling rivalry, stage fright, and alcohol preferences. Between a Bluetooth mishap and some spotty connection, we talked music.

The following is a transcript of that chat:

Okay, so now that we got that out of the way, I wanted to ask you about your new album We’re All Gonna Die. The production seems pretty different from that past few albums: North Hills was recorded live on analogue tape. But We’re All Gonna Die had more of a ‘wall-of-sound’ kind of feel. Do you think that’s a fair assessment?

Griffin: Yeah, I mean I think it’s definitely a very different sounding record. I mean I think in essence – the ‘wall-of-sound’ thing, that’s apt because there are moments where it’s hard to tell exactly what is making what sound.

How much do you think Blake Mills’ producing the album played a role in that ‘wall-of-sound’ feel?

Griffin: I mean it’s huge, I think we knew that when we decided to work with Blake. He does things his way. He obviously has a very distinct sound as a producer and that was what we were looking for. These songs – I think “We’re All Gonna Die” was the first one Taylor [Goldsmith] wrote. It was obvious to us that these songs were not being treated the same way as the songs off of the previous albums. Yeah, so he definitely had a heavy hand in shaping the sound of the record.

So you guys are playing in SLO at the Fremont Theatre January 13, as you know, and as most San Luis Obispians hopefully know, SLO’s in California, and your music is often described as having the ‘California Sound.’ Do you think that’s a fair description?

Griffin: I wouldn’t describe it that way, but it doesn’t bother me that people describe it and put labels on it – it only makes it referential for them. And if that helps them get into it, then I’m all about it. I understand and I can see the comparisons but I also like never really listened to – when we started getting the Jackson Browne, Eagles, comparisons it was news to us because we had never really listened to any of that music up until that time. Obviously, we had heard the hits but we weren’t really familiar with Jackson Browne and after our first and second record people were like, “Wow, you love this guy” and it’s like no, I just don’t know it – we came to love it. And as we familiarized ourselves with that we just continued to grow as a band and we don’t get that comparison nearly as much. The ‘California Sound’ thing is cool; I mean it’s usually said with a positive connotation. And that’s rad. I’m glad that people feel that way if that’s something they’re into.

So you guys really didn’t get deep into the cuts of Jackson Browne until after these comparisons were made?

Griffin: Yeah, I mean I’m very familiar with it now. I mean we didn’t really know much of Jackson’s music, and people started saying that stuff and it was like, “well I guess I could see that.” And then we played with Jackson out in Spain, we were his band. We’ve been his band many times for several different shows. So, we had to kind of familiarize ourselves with it to get up to speed.

Do you think there’s something about being a Californian that adds to your sound?

Griffin: Yeah, I mean I think it’s the same thing as if you were a Minnesotan, it’s gonna influence the way your music sounds. It definitely has a palpable effect on the music. And I think California has a pretty extensive history when it comes to musicians, artists. There’s a big history here.

So you and Taylor are brothers. What’s it like to be in a successful band with your brother?

Griffin: That’s a question we get a lot, you know, because I think people kind of expect us to be at odds. But we’re not. My brother’s like my best friend. It’s really awesome. Not only do we get to have the coolest job, but we get to do it with our best friends – all of us feel that way. We’ve been around for a while now, but we still feel young and we feel like we’re just gearing up and this is just the beginning of our career. I think a huge part of that is just getting along and having favorable relationships with one another.

When you guys were first learning how to play instruments, would you collaborate with each other, or was it at first kind of a competition?

Griffin: I think it was different for all of us. Like when we met Wylie [Gelber], he’d already known how to play bass. He was playing with a different band [Simon Dawes] – we were all in high school. I started playing drums when my brother, Blake, and Wylie left on tour when I was in like 8th grade probably. I had played piano at that point, and I was fine: there was always a musical tendency in me. I took to drums much easier. The guy who played drums in that band who was one of my first drum teachers, who still plays with Blake – his name’s Stuart Johnson. He was considerably older than all of them. He’s probably about fifty now. It was kind of in the cards that I would one day be playing drums for them because he didn’t want to do all the hard touring that they were doing. So I think took the initiative and I learned how to play to the drums hoping that would pan out and that we’d all get to play together some day, and sure enough

Dawes, like a bunch of other artists, gave musical support to Hillary Clinton during her 2016 run for the Presidency. You guys played “Man Smart (Woman Smarter)” in an ad for Hillary Clinton, according to Paste Magazine. How do you reflect on throwing support for Clinton’s campaign?

Griffin: Honestly, I think as important as politics is in anybody’s life, its also one of the most personal aspects of any individual’s life. I sometimes definitely feel imposed upon when artists that I’m into are spouting off about their political beliefs – and everybody’s entitled to think whatever they think, but I try not to impress it on our fans. We did what we could do with our music to help a cause that we believed in, but I’m not going around publically telling people that they’re wrong.

So you think politics has a role in music, just that the role shouldn’t be amplified too much?

Griffin: I think politics definitely influences a lot of our favorite songwriting. There’s no doubt about that. It depends on the artist. I think a lot of people find it to be their responsibility to speak up try to create change. But you know I don’t understand why – if someone’s famous because of their pop music, why their political beliefs should be held in high regard.

So I’ve seen Dawes play a really intimate show at the old SLO Brew and I’ve also seen you guys play at Stubb’s BBQ in Austin, Texas, which was pretty big, probably like 500 people or so. So do you have a preference between the intimate and the big shows?

Griffin: I like them both. I think in the intimate setting you can play accordingly. It definitely changes the way we play. It changes the set list. It allows us to do stuff we can’t do when we’re trying to appeal to larger crowds. But they’re both awesome for their own reasons. Playing to a larger crowd is really fun because the energy is there – it’s kind of a feedback loop: the fans get you going and you kind of manifest back and hopefully energize them.

Was there ever a point in your career where you were freaked out by large crowds or playing for Letterman?

Griffin: I’m sure there are moments where I’m nervous about something, but oddly enough, the only time I’ve ever been nervous about something, playing music on stage, is if I’m under-prepared – which doesn’t happen just because we play these songs so many times together. Particularly with Dawes I have so much confidence when I go up on stage because I’m so familiar with the material and the musicians around me who are supporting me and who I’m supporting

One last question: tequila or champagne?

You only drink champagne when you run out of tequila?

Griffin: Yeah, or if I’m really trying to hurt myself.

Matt Goulding conducted this interview. He is a KCPR DJ and Cal Poly history senior. The feature image of this article was taken by Matt Jacoby. It is used with permission from the artist management agency called Q Prime.