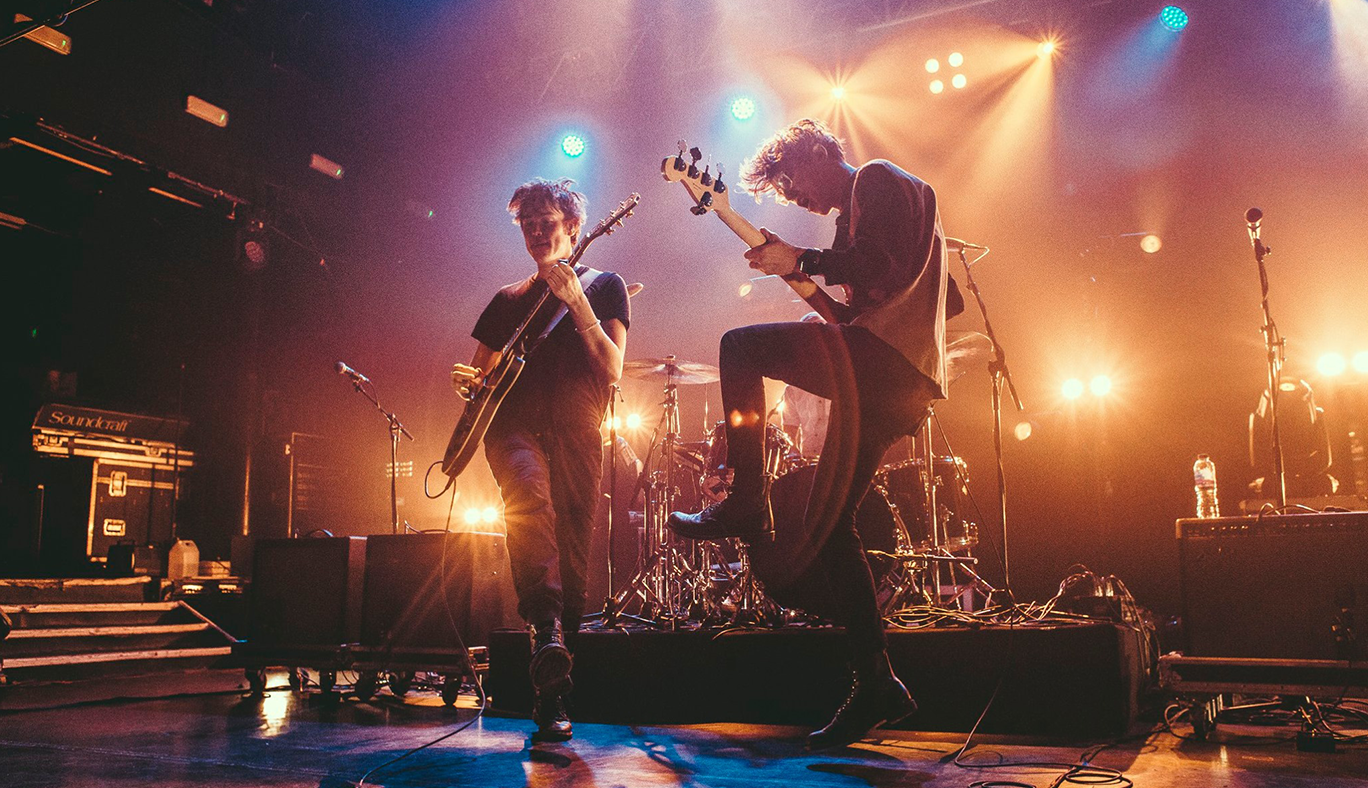 What The Hell Is Biofuturism? With Joonas Siren

In 2013, the internet brought a multitude of gems, from “swag” to the Harlem Shake, but one that has prevailed into the new decade is Hippo Campus.

The five-piece group met at Saint Paul Conservatory for Performing Artists, and the members, after having been through a number of bands, united as Hippo Campus.

Releasing their first EP, Tarzan Rejects, in 2013, the Minnesota-based band experimented with various band names, Tarzan Rejects being one of the first in reference to the leopard print shorts one of the members was wearing at the time. Names such as Beans, Stitches, and Espos were played around with until finally settling with Hippo Campus, a name thought out by lead-guitarist Nathan Stocker while in his psychology class.

I was fortunate enough to interview Zach Sutton, the bass player and professional viber of Hippo Campus, over the phone.

BM: Hi, this is Brian from KCPR and I’m here with Zach from Hippo Campus.

ZS: Yes sir, you got it right.

BM: Could you introduce yourself and tell me a little about Hippo Campus.

ZS: I’m Zach from Hippo Campus and I play bass. We’re a band from Minneapolis, Minnesota.

BM: How is the music scene in Minneapolis? How would you compare it to the rest of the world and SLO?

ZS: Minneopolis has this really cool rising scene, independent from everything else. Geographically, there’s nowhere to go if you’re going to Minneapolis. It’s self contained and the art there is super grassroots and local. Great local radio stations and venues. It’s this really supportive scene and we owe pretty much everything we have to their support when we started out.

BM: Nice. Now I’m sure you get this question a lot, but how did the name Hippo Campus come to be? Because you would think it’s referring to the part of the brain, but it’s two separate words.

ZS: You pretty much got the nail in the head. Our guitar player Nathan was in psychology class in high school and he went, “Okay, now hold on. What if we just put a space in the middle?” You know the meme where there’s this group of kids and one kid is looking at the camera and everyone around him is freaking out? That’s exactly what happened when he put the space in hippocampus.

BM: That’s great. Would you say it’s more for a catchy phrase, or does it have an actual meaning or relation to the music?

ZS: Well, obviously in psychology class we learned it’s the center for memory and emotion, so I’m sure that had some connotation to the name. But, there was this band called the Limbic System, and they’re from the south west and actually a really good band, so Nathan took a lot of influence from them. So he thought, hippocampus is a part of the brain, let’s do it! And bang bang boom, we’re stuck with it.

BM: Hell yeah. Now, I personally am a huge fan of your music, but for people who are new to Hippo Campus, what’s the sound — or, rather the name that you would give the sound — you’re producing?

ZS: Well first of all, thanks for being a fan. Indie rock/pop would probably be the genre name. When we started the band we had this really stellar idea of having our catch phrase/slogan be “we’re more of a party than a band,” but we quickly abandoned that idea and had to be reminded by our fans that we said that a couple weeks later.

ZS: I don’t know, it’s kind of like, good vibes. Just trying to vibe it out.  Just vibin’ out here.

We proceed to vibe check.

BM: With the vibe that you’re conveying, who’s an artist you would love or you think would work really well with Hippo Campus in a collab?

ZS: Well first of all, we have so many creative friends around the country who we’re lucky to call our friends. Bands like Sure Sure, Coin, White Reaper — bands like that on a larger scale.

I love the idea of collaborating with a lot of different producers. Like Rostam, he’s the guitarist for Vampire Weekend, but now he’s moved more to production and does a lot of cool work. Charli XCX is a really good producer and songwriter. Yeah, Kidz Bop, they make a lot of cool stuff.

BM: Well, I’ll certainly be on the look out for those collaborations in the near future.

He laughs. Zach has passed the vibe check.

BM: Now, you guys are fairly new on the scene, more relevant in recent years. With KCPR‘s audience being primarily college-esque, we cover a lot of bands who one day hope to be Hippo Campus. What’s a piece of advice you would give to aspiring musicians who want to get to the position you guys are in?

ZS: I mean, we didn’t expect to be a band really after high school. It’s all about lowering your expectations — just kidding, haha. We were a group of friends making music for our friends, we did it because we loved to do it and it was fun. Rockstar dreams are nice, but we really didn’t aspire to that and just kept doing it.  Now we’re lucky enough to be doing it for our jobs. My advice is to love music, make it all the time. Make really bad music and hopefully that will turn into better music. Whether you do it alone or with a group of friends, keep on it.

BM: Last question. I would say you’ve been in the music scene for a long enough time now. Based on your experience, what’s the general direction you see music going?

ZS: The music scene in general is always under scrutiny because of the constant changes and innovations in the way we digest music and consume it. Obviously, live shows have been the main source of income for active musicians because you can’t actually live off the revenue from streaming services like Spotify. In a certain way, the music industry has shifted to this live-centric thing, which is super awesome. We love playing shows, we love going to shows, festivals are I think more popular than they’ve ever been.

The longevity of artists spent on the road isn’t a permanent thing, it’s pretty grueling. It’s pretty tough to be away from home and have to put something on every night. The music industry is probably going to capitalize on live shows for the next couple years, but behind the scenes, creatively, I think there’s a really good energy in terms of grassroots response to that sort of thing.

It’s still easy to produce and release music now that there’s a surplus of it, which I think has sort of diluted it all, but I think that’s making people want to make better more pertinent music. I think a lot of talent is shifting to something more meaningful.

BM: Well that’s a very interesting take on it.

ZS: I could be totally wrong.

BM: It makes a lot of sense, considering music and media today. Regardless, Zach, thank you so much for this interview with KCPR.

ZS: Well thank you so much.

BM: Keep on rocking and thank you so much for your time.

Brian Mendez is a Cal Poly Music Junior and a KCPR staff member. He conducted the interview. Featured image credit to Hippo Campus.