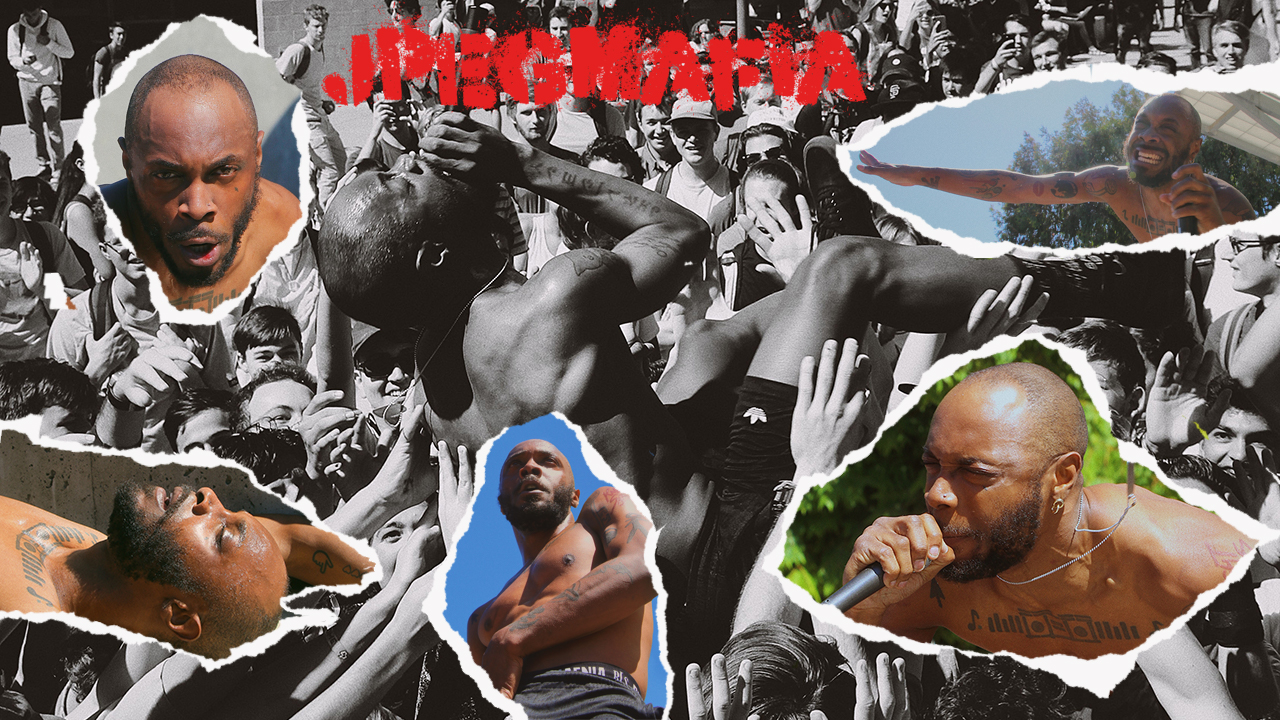 An Honest and Thorough Reflection On Desert Daze 2019

So here’s a question.

What makes a good artist?

Of course there is no real answer; this question is completely subjective.

But what is less subjective is judging an artist’s ability to push the evolution of a musical genre and redefining an audience’s understanding of what that genre should sound like.

JPEGMAFIA is one of these artists, and if I do say so myself, he’s pretty damn good too.

JPEGMAFIA recently said in an interview with Apple Music that rap evolves faster than any other genre. When I got a chance to ask him what he thinks he’s doing to help rap evolve faster, he put it simply:

“I think the thing I’m specifically doing is just being as much of myself as possible.”

But, this begs the question: Who is Peggy (as his fans call him)? And what does it mean for Peggy to be himself in his music?

To answer that, we have to take a look into Peggy’s story and his evolution.

Peggy was born in Flatbush, New York. For most rappers, this would mean that Peggy would claim Flatbush as his hometown, but his story is a little more complex than that. Peggy was constantly moving growing up, living in multiple cities around the world.

Peggy’s first change of scenery came at the age of 13 when he moved to Alabama. Far from the ethnically diverse boroughs of New York, Peggy found himself face to face with the ugly reality of America’s racism. These encounters planted the seeds for many of his politically charged lyrical content that would be a frequent theme throughout his later music.

When I asked Peggy about how he weaves his sense of humor throughout his music, he had a different opinion about what’s a joke and what he’s serious about.

“People just tell themselves I’m joking to make it less uncomfortable, cause some of the things I’m saying it’s like, he doesn’t really mean that. But it’s like, no. I would.”

Peggy’s journey continued when he moved to Louisiana and joined the military at 18. He was deployed in Iraq, Kuwait, Japan and Germany, among other cities around the world. Although this was a significant chapter in Peggy’s life, Peggy says that his involvement in the military had very little influence on his music.

“As far as the culture of the Air Force how did it affect my music? None. I didn’t even allow them to know I made music.”

While the culture of the Air Force didn’t influence his music, it was during this stage of his life that he learned how to make beats sampling songs and gaining underground attention in Japan under the music alias Ghostpop.

This stage of his music creating career was stylistically much different than what we hear on his most recent albums. Ghostpop can be vaguely defined as ambient vaporwave pop, while his new material can be described as, well, go check it out for yourself.

Peggy’s international military travels also meant that he turned to the internet as a home. It was the one place that he could turn to no matter where he was in the world, and is largely responsible for his very globalized sound.

“The internet has taken the power away from people who don’t make music’s hands … now there’s a lane for [me].”

Peggy’s sound isn’t that of a New York artist, or a Southern artist, his sound is indicative of a life of travel and exploration cultivated by the culture of the internet. The internet’s influence on PEGGY is evident throughout his persona, whether that be his face tattoo of a mouse pointer or, more obviously, the incorporation of the word JPEG into his rap name.

After a few years of living in Baltimore, Peggy’s newfound fame and success drew him to LA, which is where he now lives.

Peggy told me that his goal in life was to be able to make a living off of making music, and perhaps this final move to the city of dreams meant that he had finally accomplished that.

But even Peggy admits that his career of making music is a bit odd.

“I kind of realized with the reception of this album that I’m not supposed to be doing any of the things I’m doing. Like, I’m not even supposed to be here really.”

I found myself thinking about this quote, and what it meant to the music industry as a whole.

In an industry that is often crowded with manufactured personas, watered down politically correct lyrics that appeal to the masses, and formulaic approaches thirsty for streaming numbers, it’s nice (and necessary) to have an artist like Peggy who says “we’re not doing that shit anymore.”

And that’s what I love about Peggy: he’s uncompromising. He’s unapologetically himself throughout his music, and that means his music may not be for everyone (right wingers, cops, and Morrisey, to name a few).

This also means that Peggy’s art exemplifies an intrinsic dichotomy as well. He spit witty bars about toting guns and homicide and follow it up with a lyrical allusion to Carly Rae Jepsen or wearing “your grandmama’s hand me downs.” He can sing a melodic R&B hook on one song and sample himself screaming at the top of his lungs on another. He can drop a tongue-in-cheek song title that deals with very serious lyrical content.

When an artist is truly themselves in their work, this is what you get. A true artist cannot be defined or pigeonholed or expected to be one thing. An artist understands the intricacies that come with being human, the forever oscillating traits that characterize the whole.

Peggy is always evolving, and by embracing his evolution, he does the music industry a great service by pushing the boundaries of this beautiful art form.

So the next time you listen to one of his songs and hear Peggy’s producer tag say “you think you know me,” maybe now you can say you know him a little bit better.

Taylor Garvey is a Cal Poly Journalism senior and a KCPR staff member. He wrote the article, conducted the interview, and created the featured image. All photos were taken by Wyatt Webb, Cal Poly Landscape Architecture junior and KCPR staff member.