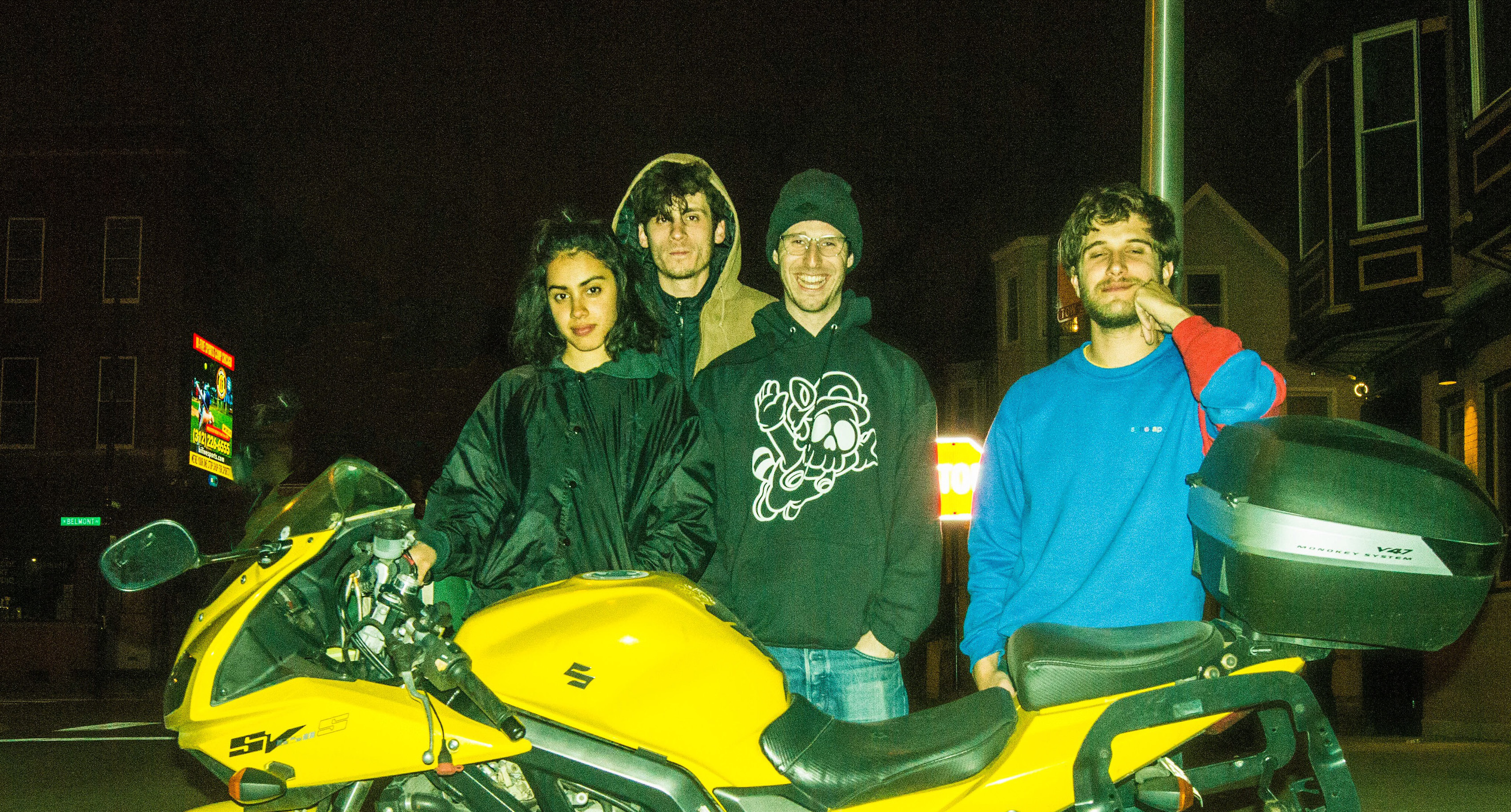 This afternoon, I chatted with Brian Aronow, one quarter of the band Crumb.

Though the show at Madonna Inn was last weekend was cancelled, you can still catch the band in live at this year’s upcoming Desert Daze.

OP: How’d you guys get started?

BA: We all met up at school, just became friends and played a bunch of music together.  We kinda had no real goals, just hangin out and then the project started about three or four years ago. Lila had written some songs and we just started practicing, recorded the first EP and then started playing shows and recorded more and here we are.

OP: What did you record on?

BA: We had gone to a friend John Scott in Boston to record three songs. So we went in for a few days and put it out a couple months later onto Spotify and YouTube and all that. Then we went back for the next EP. We recorded with Gabe Wax for this last album in NY and then we had John Scott work on it as well.

OP: Where does the name come from?

BA: There’s not really any good story with that one. It’s more about the sound of the word and than the actual meaning. John and Jessie had thought of it and it just kinda stuck. Nothing to read too into.

OP: What texture do you associate with your music?

BA: I definitely think in terms of the instruments I play — keys, synth, saxophone and stuff — and I think all our sounds are very associated with different textures, but its not like theres an overall one. Whatever the chords are plus how the sounds are meshing together is very much a texture or mood or atmosphere, however you wanna use those words interchangeably. Some are muddier and stickier, like they trap you in, and some are more floaty like clouds and snow. But I think we really like to play with the textures when we record, and also live. It’s something we all really like carving out

OP: Do you have a favorite song you like to play live? Do you make setlists or just go with it?

BA: We’re always changing it up every tour — not to give too much away before the show… but we always try to play stuff from early on, stuff from the album, and just kinda figure out a flow that makes sense kinda as one continuous story, how the mood of the whole night works collectively together and we’re always changing up our arrangements of the songs. We see things that don’t work and are constantly changing it.

OP: How do you think you’ve evolved as a band?

BA: We improvise, but I don’t think that’s something that we’ve evolved to do. It something we’ve kinda been doing since the beginning. There are elements of the set that are improvised and also evolved in the sense that there’s no intention; we’re not trying to sound like something, and we’re not after something and that’s what we’ve been striving for the past few years. But I think it’s more that we just want to keep changing what that is, talking through things, arranging things and setting the intention.

OP: What was the songwriting process like, in the past and also for Jinx?

BA: It’s been kinda different for each one. A lot of times Lila will bring a demo that she’ll make to the band  and we’ll kind of arrange it and bring it to life. Sometimes I’ll write a thing and send it to Lila, and she’ll write some on top of it. I feel like the best metaphor is a bunch of song children where all the births are kinda different, and it takes months or sometimes years to really get inside the song. Sometimes it ends up being just like it was when in the beginning and  sometimes its drastically different. Like planting a seed and then having that evolve.

BA: It always changes. We each have such a personal connection with all the songs, and maybe what had happened in our lives around the song and what it brings out influence that. A lot of times in the improvised sections, I always try to dedicate it towards someone or try to see it as  a very alive thing to help stay connected so that we’re not just playing them like robots. Also naturally, the newer the song, the more you are excited about playing it, but the old ones we’re always changing up a bit to make it seem fresh, not playing robotically.

OP: You self released the album right? What drove that decision?

BA: It’s something that we’re really passionate about as long as it’s possible, which it has been. We’re really lucky we’re able to have that support from fans directly from the internet and from coming out to shows. That money was directly rehashed into recording and invested into the shows and it’s just nice to have something directly from us. It’s a really special thing to do have a direct relationship with the fans and feel that support be directly invested. We have an amazing team of managers and people out on the road with us and distribution partners and all that stuff so it’s not like we’re totally alone, but it’s nice to be able to have control. Why not if it works, you know? We’re grateful for that.

OP: What has been the biggest challenge so far?

BA: The beginning when we were all working other jobs, I was still in school, in this real in-between — is this gonna happen, can we take a leap of faith to work a lot and not be secured in this financially, not secured in where it’s gonna go, and touring a lot through that as well. Just pushing ourselves and our stress levels — it was a lot for two years. Through that we’ve grown so much personally and as a band and to have those moments of being on tour and learning how to navigate your sound without a sound person, or your tour without a tour manager, plus  driving a lot and recording with a very limited budget. Also, in the beginning, incorporating other businesses and trying to run that and keep track of finances and all these things that no one really teaches you. There have been a lot of little mistakes along the way, but you learn from each one and we’re still learning from that kinda stuff but you have to keep a real open mind. The same way with the music and evolving, it’s the same with how we are as a band like and how we’ve navigated this whole thing.

OP: How many years has it been since you first started operations?

BA: We recorded the first EP spring 2016, three and a half years ago. Probably about four years ago we started getting together and working. We didn’t really play our first show until three years ago and then we did our first tour summer of 2017… so two and a little bit years ago. We’ve known each other for about seven years, though.

OP: What inspires you in terms of music or environment?

BA: I can’t answer that for the whole bands. For myself, I really like being in a place where I don’t feel in a time crunch, or feel the pressures from normal scheduled living. I think it’s being able to be somewhere where you can walk around to think about and solve these problems. The songs become puzzles and you’re like, how can I make this work? Sometimes earlier on in the process, its more just about having a hard day, coming home and playing the piano or having something emotional in your life and making that into music. That’s the most similar among all four of us, and probably many musicians.

OP: Who would you collaborate with tomorrow?

BA: Damn, a lot of people. Nothing off the top of my head. I would love to collaborate with like, so many different people and kinds of musicians in the world. I don’t know how the experiment would work, but I’m always down for seeing how you can challenge each other. The situation brings out a certain musical side of you. I think doing all the experiments are really cool, but I’d be nervous to get a bunch of money and have someone to collaborate with and say this will be released in three months- – like with that, you really don’t know.

OP: One last question — is there something you hate being asked in interviews?

BA: Definitely interviews tend to, since we all met in school, get really stuck on that aspect of it. We say again and again, it’s really just the place we met and the academic world of school really had nothing to do with the band. Like, we lived in a house and hung out and played music together but it’s really more just like a place we met.  Sometimes when interviews get stuck on like “what did you all study?” and “what was the school like” I’m always kinda like, this has nothing to do with us.

Olivia Peluso is a Cal Poly English senior and a KCPR staff member. She wrote the article. Featured image credit to Wikimedia Commons.