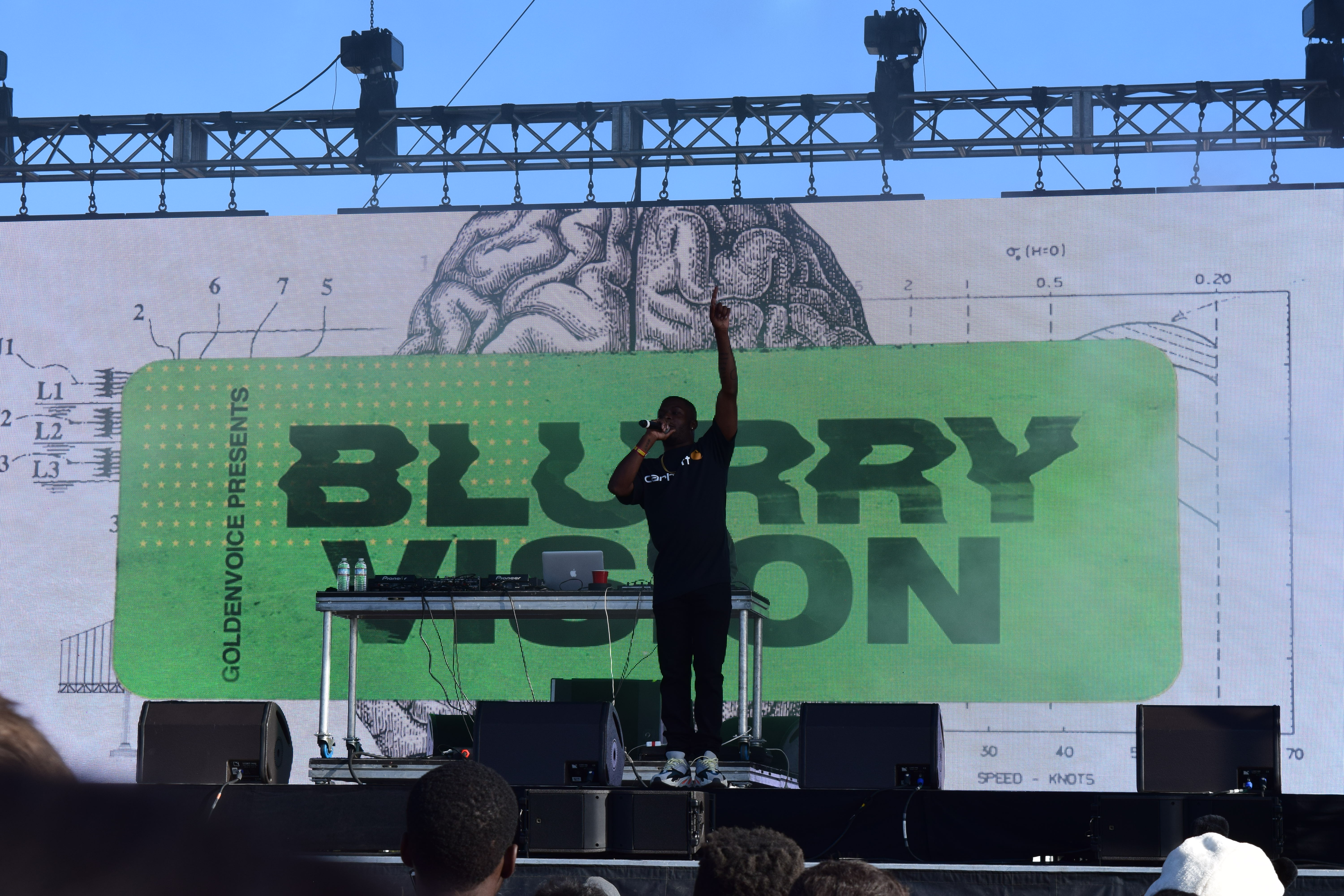 Across the bay from San Francisco, in a grassy field on the edge of the water was Blurry Vision Fest.

The two-day festival was located in a harbor next to the ocean in Oakland and featured artists with styles ranging from lo-fi dream pop to hardcore hip-hop.

For transportation, festival-goers had to take a free shuttle which came with the ticket. The shuttle ran all day from the West Oakland BART Station, a convenient and easily accessible spot – especially for those native to the area. This was an effective method of transportation as the venue was in a protected area with absolutely no public parking.

The only issue with the shuttles came at the very end of each day. The lines were jam-packed with everyone trying to leave at the same time after the closing artists, SZA and Migos. Some even had to wait over an hour to leave, but as long as the venue remains at the same place, it seems to be the only option.

At the site, there was plenty of open space to walk around and sit if you wanted a break while you were there. It was disappointing to see that almost all of the grass was dead, but it probably would have been trampled by the massive crowds over the course of the festival anyways. It was pretty windy, but otherwise, the weather was good. The whole experience was tied together by the amazing view of San Francisco as the backdrop. 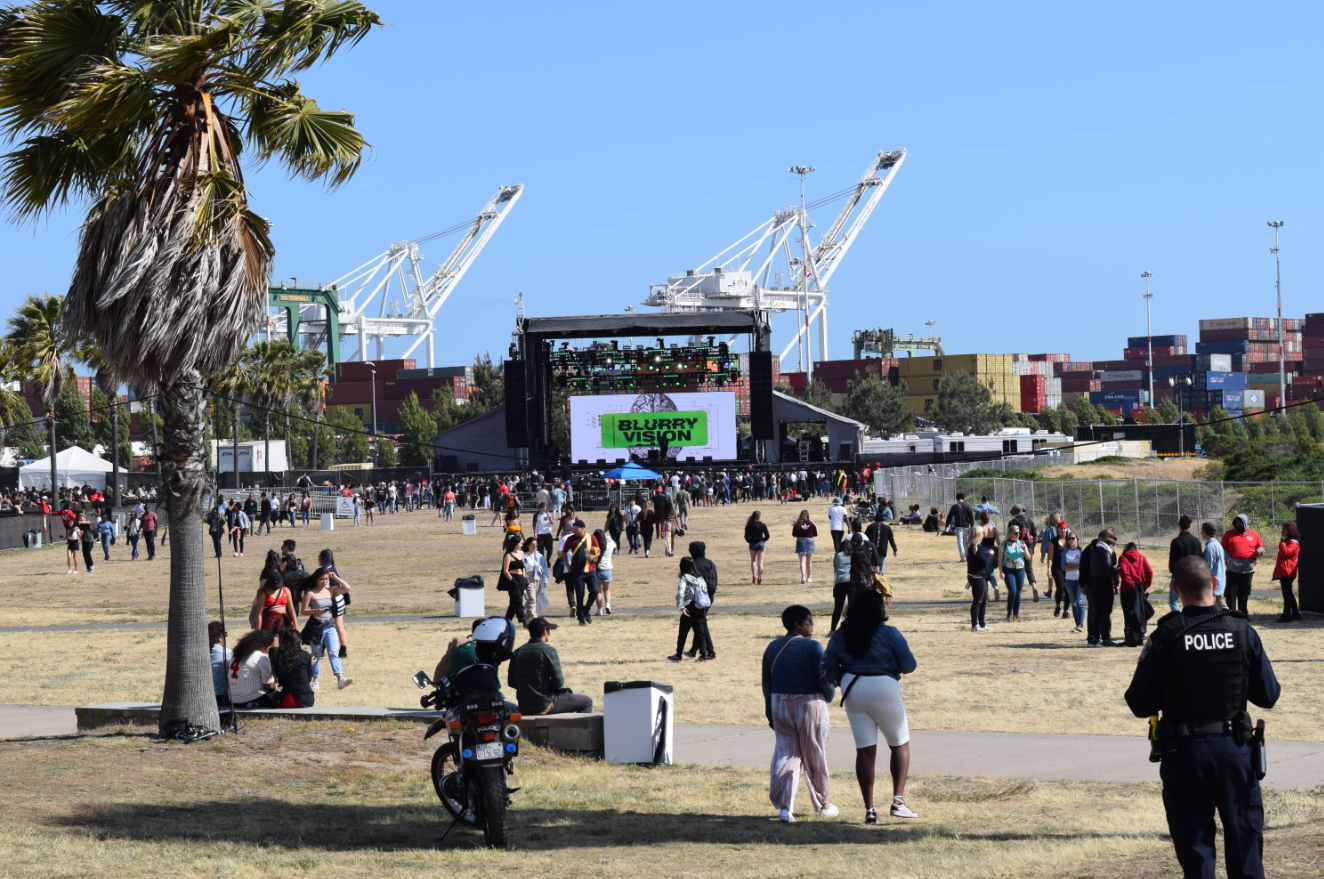 A view of the Blurry Vision venue from afar.

There were plenty of bathrooms, lots of food and drink vendors, and even a booth for voter registration. There was also a tent to purchase merchandise, but it was largely for Blurry Vision branded items. I would have liked to see more merchandise from the featured artists, though I’m not sure of the logistical problems that could present.

The stage and audio were nicely put together and there was a large screen behind each performer for visuals that complemented their act. 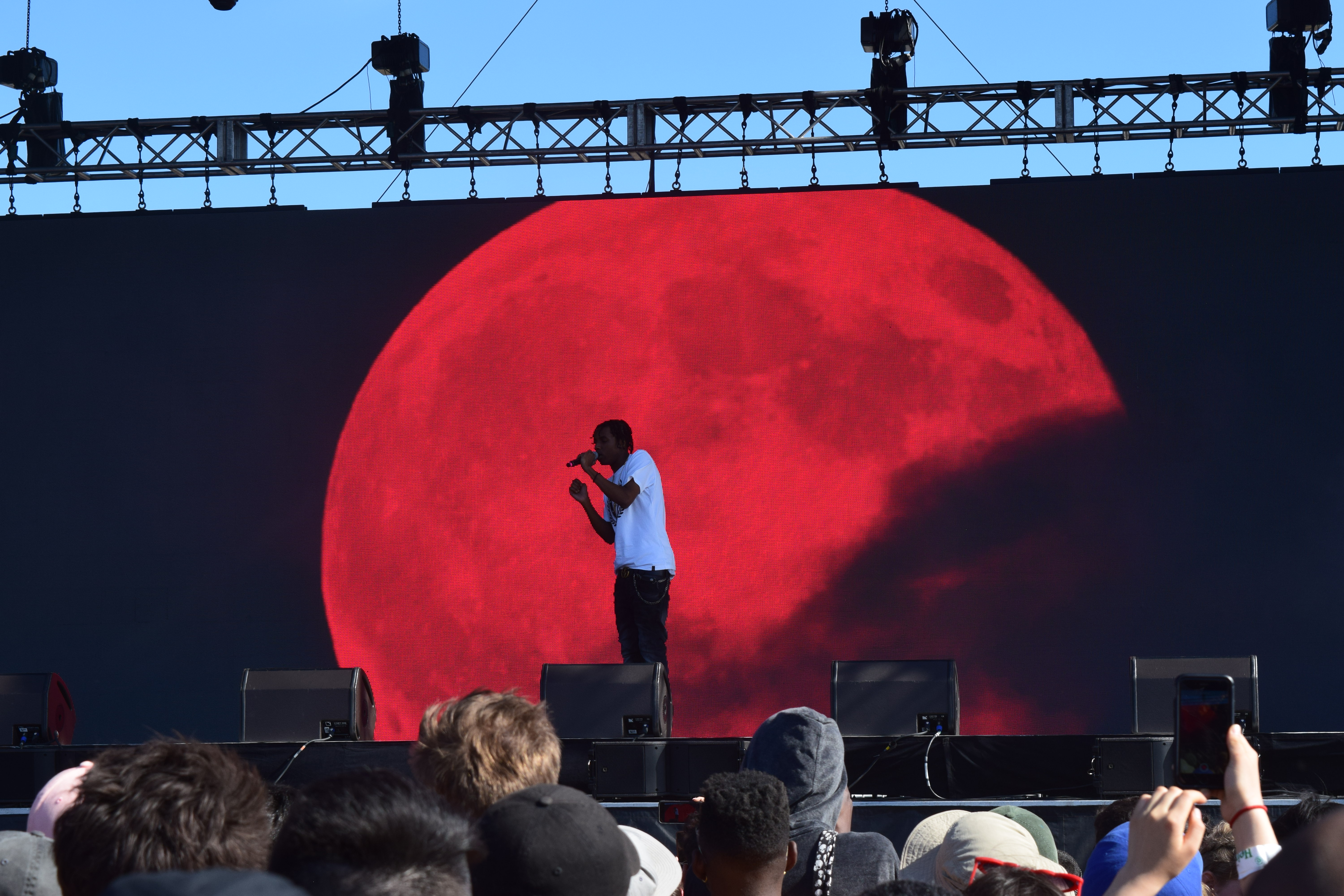 Some highlights from the festival were from Migos, SZA, and especially Brockhampton, who had violinists and practiced choreography.

The crowds at Migos and Brockhampton were fired up and ready to mosh with each song, while those at SZA were more mellow, flowing with the vibe of the music. 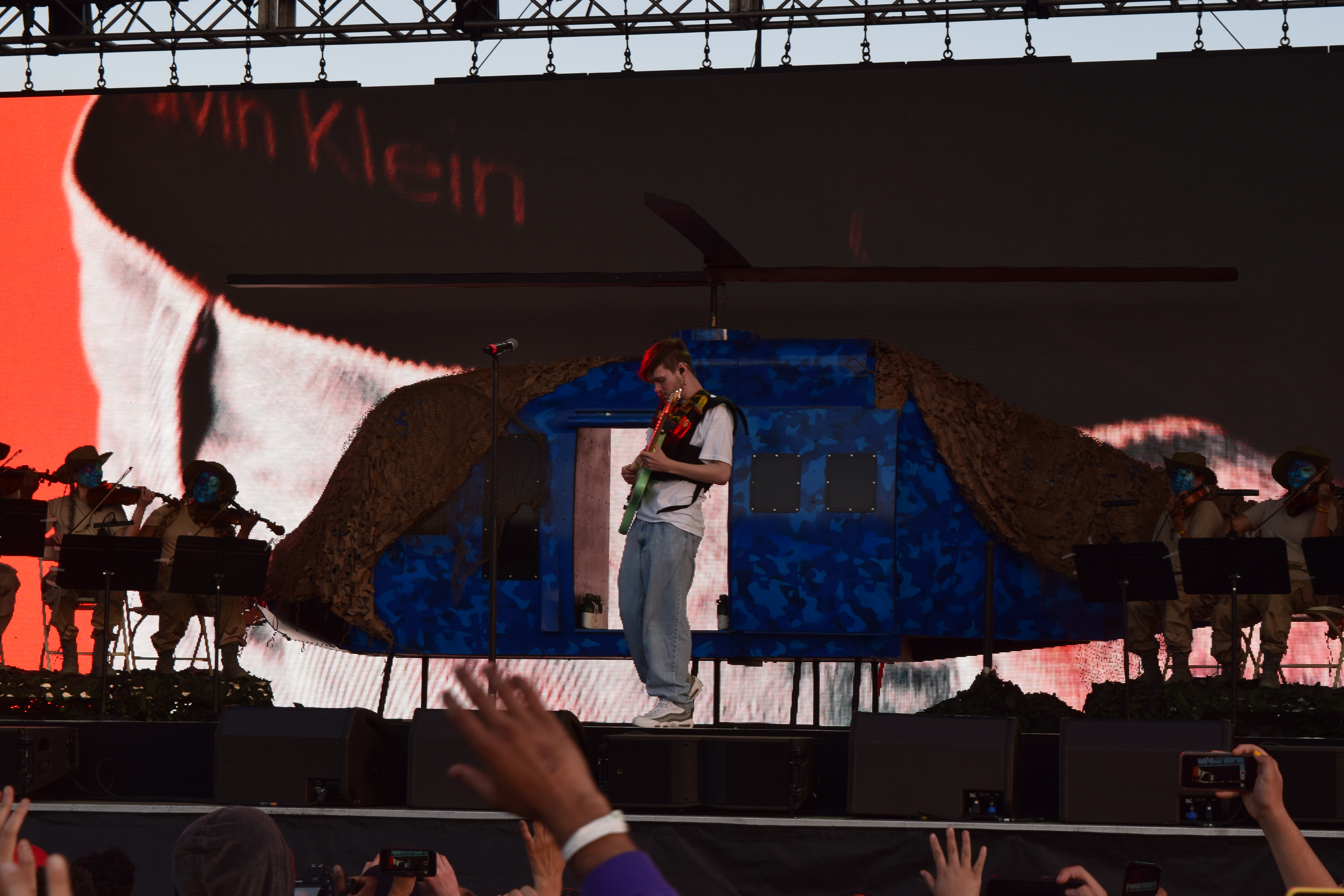 Brockhampton’s bearface. takes the stage for a solo.

SZA mostly played songs from her newest album, CTRL, and even brought out Isiah Rashad, a rapper who performed earlier in the day.

The festival started off with Caleon Fox on Saturday and Temporex on Sunday. Despite not having the ideal crowd attendance early in the festival, they both made the best of it and were able to win over the audience with their genuine attitudes and enticing background visuals. 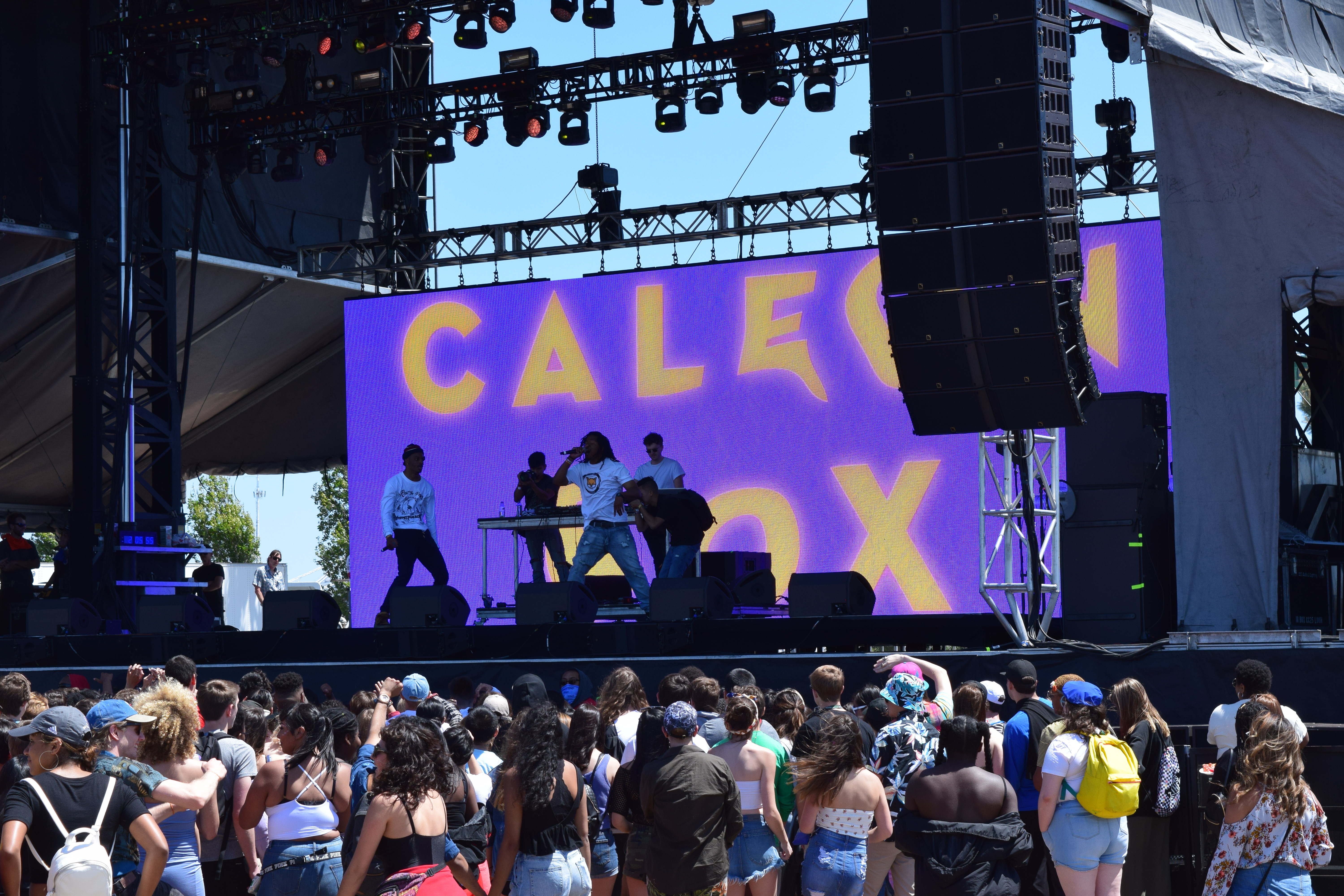 Caleon Fox starting off the festival on Saturday.

The artists that were the most memorable were the ones with the best stage presence. My personal favorite performances mostly all featured live bands. Some of these artists included: Clairo, Brockhampton, Healy, and Xavier Omar.

Kamiyah had a great performance, complimented by backup dancers that had a choreographed routine for each song. Joji’s stage presence was really funny and genuine. He was even throwing out underwear and bananas to a surprisingly eager crowd.

I was very surprised by artists Roy Woods and Majid Jordan. I was not a huge fan of either artist going into the weekend, but by the end of each set, I had completely changed my mind. They both made it super easy for the crowd to get into each song with their presence, using dancing and great synced visuals to engage their audience. Roy Woods even unveiled a new song in the works so I am eagerly anticipated the public release of that.

Sango had fun remixes of popular songs like Caroline by Amine and Lift Yourself by Kanye West. NxWorries provided the melodic and thumping grooves I was expecting, and Isiah Rashad got me fired up with powerful songs I had never heard before.

All in all, I really enjoyed the festival.

Each moment of the day provided something memorable to walk away with, whether it was the lyrics, the visuals, or the incredible energy in the crowd.

Nick Bishop is a KCPR content contributor, DJ, and a Cal Poly sophomore. He wrote the article and took the pictures.