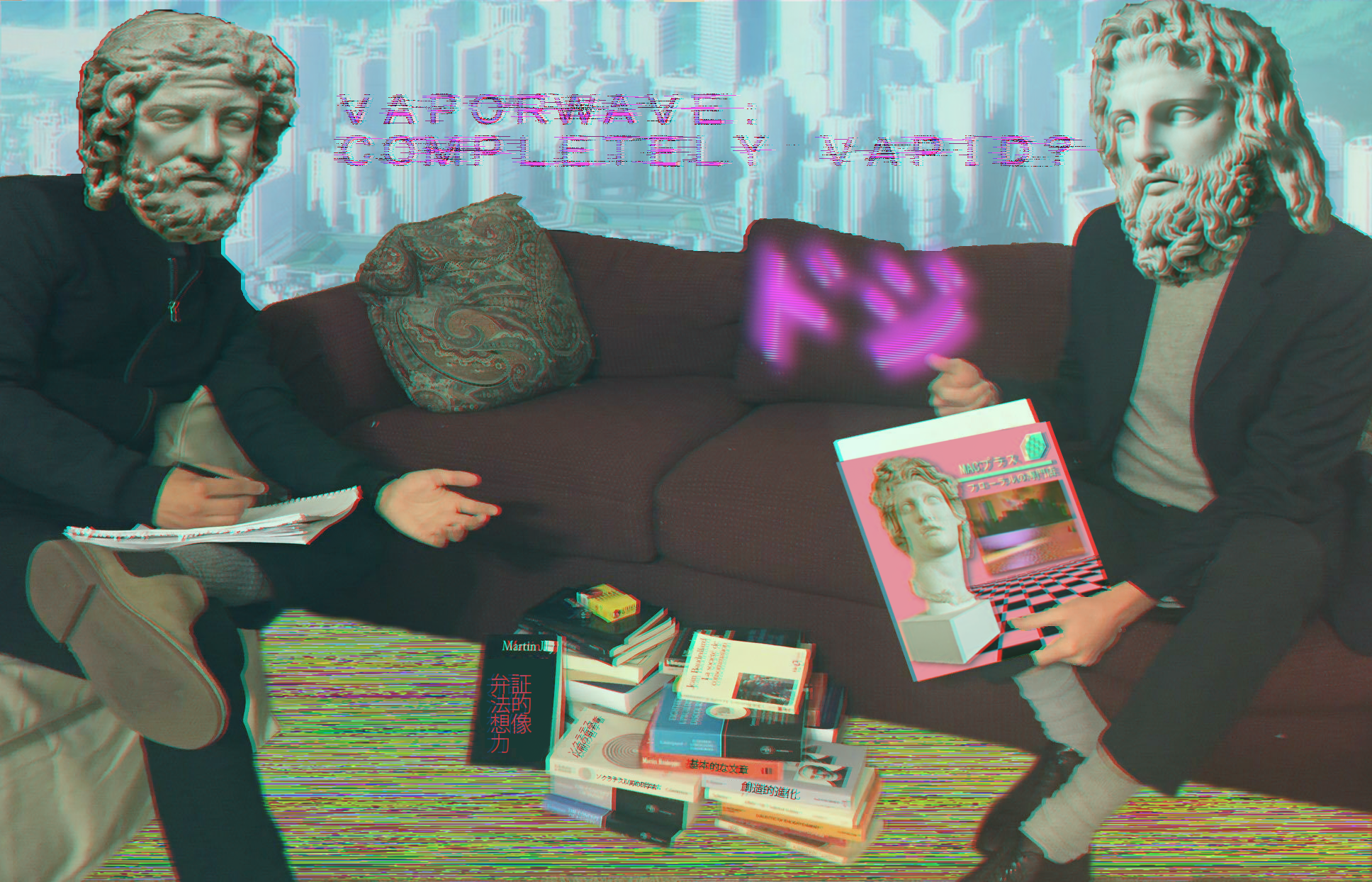 Vaporwave is that ironic-meme-Roman-bust-Windows-95 genre that just sounds like slowed down music, right?

Sort of? To take from WolfensteinOSX’s wonderful video, “Vapourwave: A Brief History,” “[Vaporwave] began as an ＡＥＳＴＨＥＴＩＣ that was popularized by an obsession with 80s and 90s subculture, using glitch art, early digital graphic design, roman busts, a fascination with tropical landscapes, Japanese culture, and of course, the redistribution of old 80s elevator music, inspired from funk, new age, and smooth jazz.”

Since its beginning, the genre (if it’s even right to call it that) has changed immensely over the last few years; these significant changes are what we’ll be exploring here. From the outset, I want to make it clear that I actually genuinely enjoy this kind of music. I put forth some harsh criticisms in my analysis not because I think it’s bad, but because I want to give it an honest, serious look at certain issues within the genre.

When I say I want to give it a serious look, I don’t mean to put the genre on a pedestal by any means. I enjoy it, but I also think that there’s a dichotomous problem within the movement: some people love its memetic characteristics and take those too far, while others are taking it ‘too’ seriously. I definitely think people should be invested in their art, but some claims (that I’ll address later) made by the community are naive and contrived.

What’s with that album with the Roman bust and pink and black checkerboard? I saw it on Bandcamp, 4chan’s music board, Soundcloud, Reddit, Tumblr, etc. all the time? It’s everywhere.

That’s Floral Shoppe, by Macintosh Plus. Macintosh Plus is one of the many pseudonyms of Ramona Xavier, often known as Vektroid. Vektroid’s contribution was integral during the birth of the vaporwave movement. She was so important to the movement that one of the section headings on 4chan’s vaporwave ‘essentials chart’ (taken to be the canonical albums) is “Vektroid” while the others are all sub-genres.  If you know anything about vaporwave, your strongest conception of it probably has to do with the second track of Floral Shoppe, called “リサフランク420 / 現代のコンピュー (Risafuranku 420 / Gendai no Konpyū Lisa Frank 420 / Modern Computing)”.

Now here is what Macintosh Plus (one of the many aliases of Ramona Xavier, often referred to as Vektroid) is sampling in that track:

From the outset it’s a bit difficult to take seriously. One might say that this is stupid and uninspired because it’s just slowed down Diana Ross. Well, wait until you hear Saint Pepsi’s “Skylar Spence” (now the name of the project), compared with its original.

While リサフランク420 / 現代のコンピュー was bad, this one is outright egregious. Fans of the genre will say that Saint Pepsi isn’t vaporwave, but rather future-funk when criticisms about Saint Pepsi or other future-funk artists are leveled against the genre. Frequently, these criticisms are taken as arguments against the use of heavy sampling or any sampling at all.

This is not the the argument though.

The problems stem from a dissatisfaction with the uninspired type of sampling that plagues the genre. Just by listening to the samples against the originals of the aforementioned tracks as compared with something like The Avalanches’ respected masterpiece Since I Left You, there is a distinct difference.

Even within vaporwave, I think there’s plenty of very original and exciting sample usage. My examples however, I think pretty much stand for themselves. Did Saint Pepsi really recontextualize Tatsuro Yamashita with the same level of musical integrity that The Avalanches’ did new things with their samples? I find that argument difficult.

When I got the single “The Knower” from Youth Lagoon’s Savage Hills Ballroom, the first time I played it my record player was still set to 33 RPM. It sounded neat, and of course Saint Pepsi did a bit more than that, but I’d say that what he did was closer to what I did than what The Avalanches did.

When you see these problems being leveled against big names in the genre, whether it be Macintosh Plus’ seminal work, or Saint Pepsi’s Hit Vibes, which helped to propel the future-funk subgenre and establish it in its own right, it’s easy to see how the entire genre can crumble. Boring, derivative attempts to emulate Floral Shoppe have metastasized to every corner of Bandcamp and Soundcloud.

But Tristan, that’s the point; vaporwave is a critique of late capitalism.

It may be a bit unfair to say that these claims are self-important because few of these claims actually originate with the artists, and I think those that do might have some to their claims (albeit these critiques are mostly flaccid). Though, some artists will maintain that their unashamed theft is somehow a critique of capitalism because it’s a rejection of private property in the form of intellectual property or copyright.

The idea that the genre is a critique of capitalism is plainly wrong, which is demonstrated by the overwhelming majority of recent releases.

Beyond it being wrong though, I think that perpetuating this idea is harmful to the genre. It pigeonholes vaporwave in a way. By mischaracterizing it as a critique of capitalism, the listener becomes blind to the multitudes of motives held by many different artists. I can only really see this idea prevailing for a few reasons: that Vektroid cited some of her works as critiques of consumerism and that making the genre political somehow eases the ‘path to legitimacy.’ Vaporwave has been, is, and will be many things, but when viewed in the capacity of a critique of capitalism, it’s not very compelling.

Are you sure you like vaporwave? You seem to be trashing it a lot.

I do, which brings me to my central points. Two artists I’m going to focus on in this piece as a demonstration of the positive aspects of the trajectory of this movement are Hong Kong Express and  t e l e p a t h テレパシー能力者 (and their collaboration, 2814). I imagine that there are plenty of talented artists in the genre, and I’m sure the people I’ve been railing on are talented, too, but I don’t think their works speak positively to the genre (though I do have a soft spot for Floral Shoppe).

To return to the issue of sampling, take a look at t e l e p a t h テレパシー能力者’s body of work. He samples frequently, but he never actually does the work that many credit to some of the horribly unoriginal samplers. Take a listen to one of his songs and its sample, like we did with Macintosh Plus and Saint Pepsi. Here’s a track, “手をつないで” off of the album アマテラス.

Maybe that doesn’t sound like much more than Macintosh Plus or Saint Pepsi, but I think there’s much more definitive work taken to the sample by t e l e p a t h テレパシー能力者. I digress though, because my primary interest with him and Hong Kong Express is in their second collaborative effort as 2814, called 新しい日の誕生 (Birth of a New Day). The album was released on Dream Catalogue, a label founded by Hong Kong Express, and co owned with t e l e p a t h テレパシー能力者. This project removed the sampling from vaporwave, which at the time was seen as integral to the genre.

While this was not the first vaporwave release to be completely sample-free, it was the first that the vaporwave community rallied around and universally acclaimed. 新しい日の誕生 consists entirely of original music from 2814. This sample-free album questioned many of the standard conception that vaporwave ought to be entrenched in a reappropriation of the ’80s.

In the last year or so, the vaporwave community has collectively sought to move away from Floral Shoppe as the seminal work of the genre, towards 2814’s 新しい日の誕生. When listening to and comparing, it’s hard to understand how they can be said to be from the same genre.

What remains of older vaporwave? How is 2814’s effort not just ambient music or some other already established electronic sub genre? Does the community’s desire to move toward this album and away from Floral Shoppe show a disenchantment with the formulaic impersonations of Macintosh Plus that have been polluting Soundcloud and Bandcamp for most of this decade, and does that disenchantment signify the death of the genre?

These are all difficult questions that I don’t really think have adequate answers. Much of what remains of Greek sculpture are actually Roman marble replicas, with the original Greek bronzes melted and repurposed. The consequences of this, if one views art on any sort of spiritual level is that the essence of the piece evaporated once the bronze melted along with all of the original artist’s laborious investment.

From a more plain aesthetic standpoint, however, the properties of the material required certain design changes, such as struts, supports, occasionally in the form of tree trunks but other times unsightly prisms supporting the figure. The oversaturation of marble busts in the vaporwave aesthetic might carry with it some of these same problems. It may be that the uninspired but noticeable changes made to the originals in the sample based vaporwave of old might stand out as perversions, like the struts of Roman sculpture.

It is difficult to establish a sonic continuity between all of these works. Maybe 2814 isn’t vaporwave, and really is just an ambient album à la Boards of Canada dressed up in a facade. Maybe Hong Kong Express is right to say that vaporwave is a unique genre because there’s not a whole lot of sonic continuity making the genre cohesive, but rather a certain aesthetic and feeling, heavily focused on Pacific-Asian aesthetics and dreamy themes. Maybe the turn toward 新しい日の誕生 is a healthy one: away from misappropriative pastiche to something more honest and genuine.

Reddit user Jummkopf posted a great video that does a much better job of demonstrating how samples are used in genres that this article. Here is his post and here is the video: