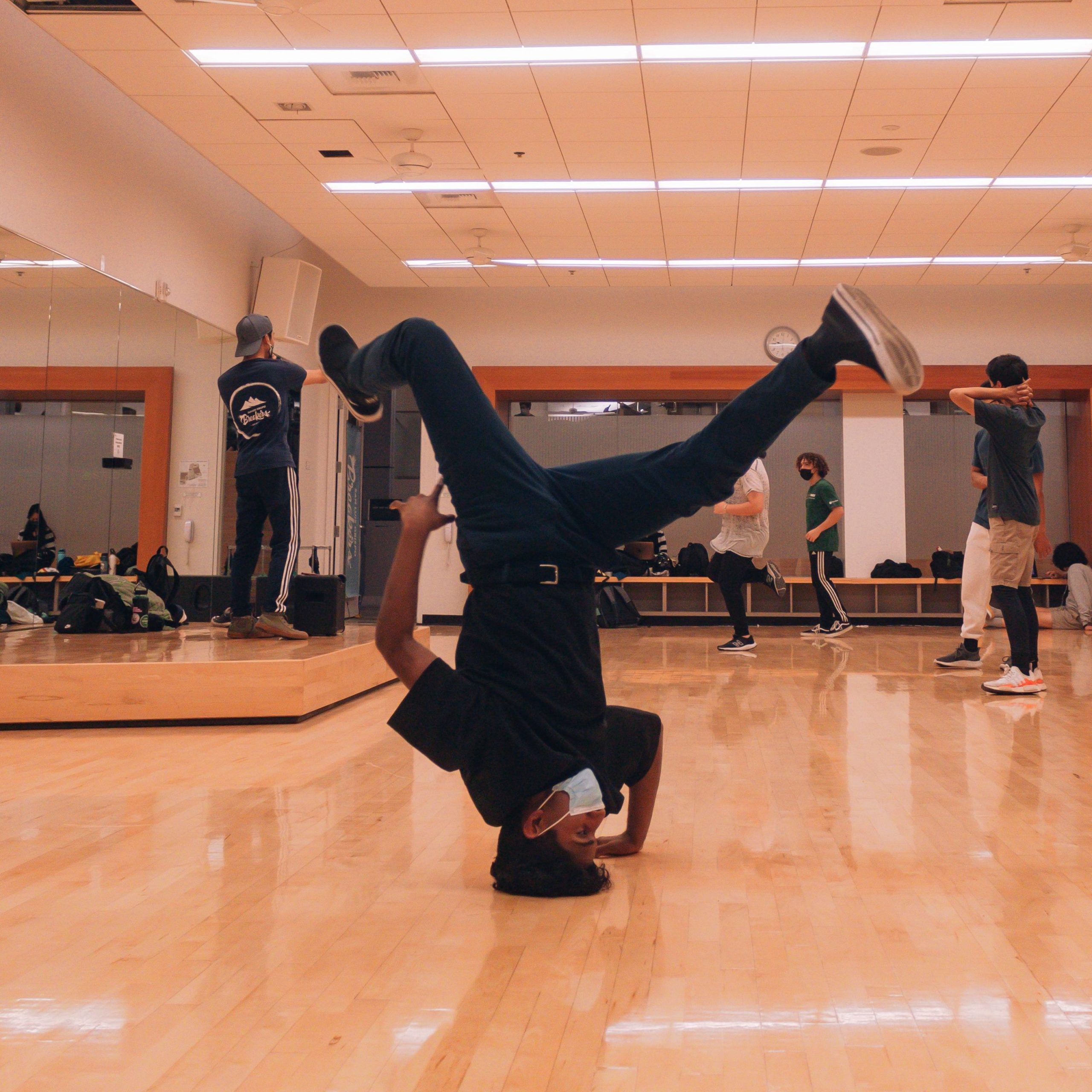 Initially used as a tactic to non-violently settle disputes, breaking has now evolved into an intricate style of hip-hop dance that is popular globally. Breaking began in New York in the 1970s, where disc jockeys aided this dance style’s creation by adding breaks to their beats for people to freestyle to.

Breakers — also referred to as B-boys and B-girls — use a combination of acrobatics and hip-hop moves to construct their style of dance. The term “breaking” comes from the performance of moves in coordination to the breaks in music beats. Breaking’s long-winded and intricate history has resulted in it recently being added to the lineup of sports in the Paris 2024 Olympics.

Upon entering their meeting space in the Recreation Center (building 43), it’s clear the team has a tight bond aside from their shared passion for dance. The uplifting community encourages each breaker, at all experience levels, to step out of their comfort zone and try new moves.

Joe Schneider, an economics junior, has been breaking on and off for about 10 years.  Schneider joined SLO Breakers during his freshman year at Cal Poly after attending a meeting and becoming drawn to the dancers.

“I get to be free with my movements and not be drilling the same move 100 times, and it is a good way to stay fit, is cool and has a great community,” Schneider said.

The team has developed a rich repertoire of competition experiences. SLO Breakers have the opportunity to travel across California — and occasionally the country —  to break with other college teams.

At breaking competitions, such as the United Collegiate Breaking League (UCBL), crews of breakers will participate in battles. This event is called a jam, which includes a series of two versus two and three versus three breaker battles. The judges of these battles are experienced breakers that evaluate the moves on a set of criteria that is up to their professional knowledge and interpretation of the dance.

SLO Breakers has hosted their own jams, such as in the fall of 2019 when they put on SLO Underground Reborn. They have also collaborated with other chapters, such as UCSB’s breaking team, to host competitions.

The team meets every Monday, Thursday and Saturday in the Cal Poly Recreation Center. The Monday and Saturday meetings are open sessions that are dedicated to the breakers working on their own moves — meetings that the team calls “labs.” Thursday’s meetings are structured to help new members improve their skills.

Brad Biscocho, the president of SLO Breakers, wants everyone to feel welcome at their meetings and for beginners to not feel intimidated.

“People will come to our club because they are interested in breaking and will stay for the community we have here,” Biscocho said. “We are always open to beginners and breakers of all experience levels.”

A dance form rich in cultural history has a home here on the Cal Poly campus, where breakers can come to express themselves unrestrained by artistic limitations. For more information, SLO Breakers can be found on Instagram @cpslobreakers.

Ashley Oakes is a journalism major and content writer for KCPR. Jackie Espitia is an art and design major and photographer for Mustang Media Group.