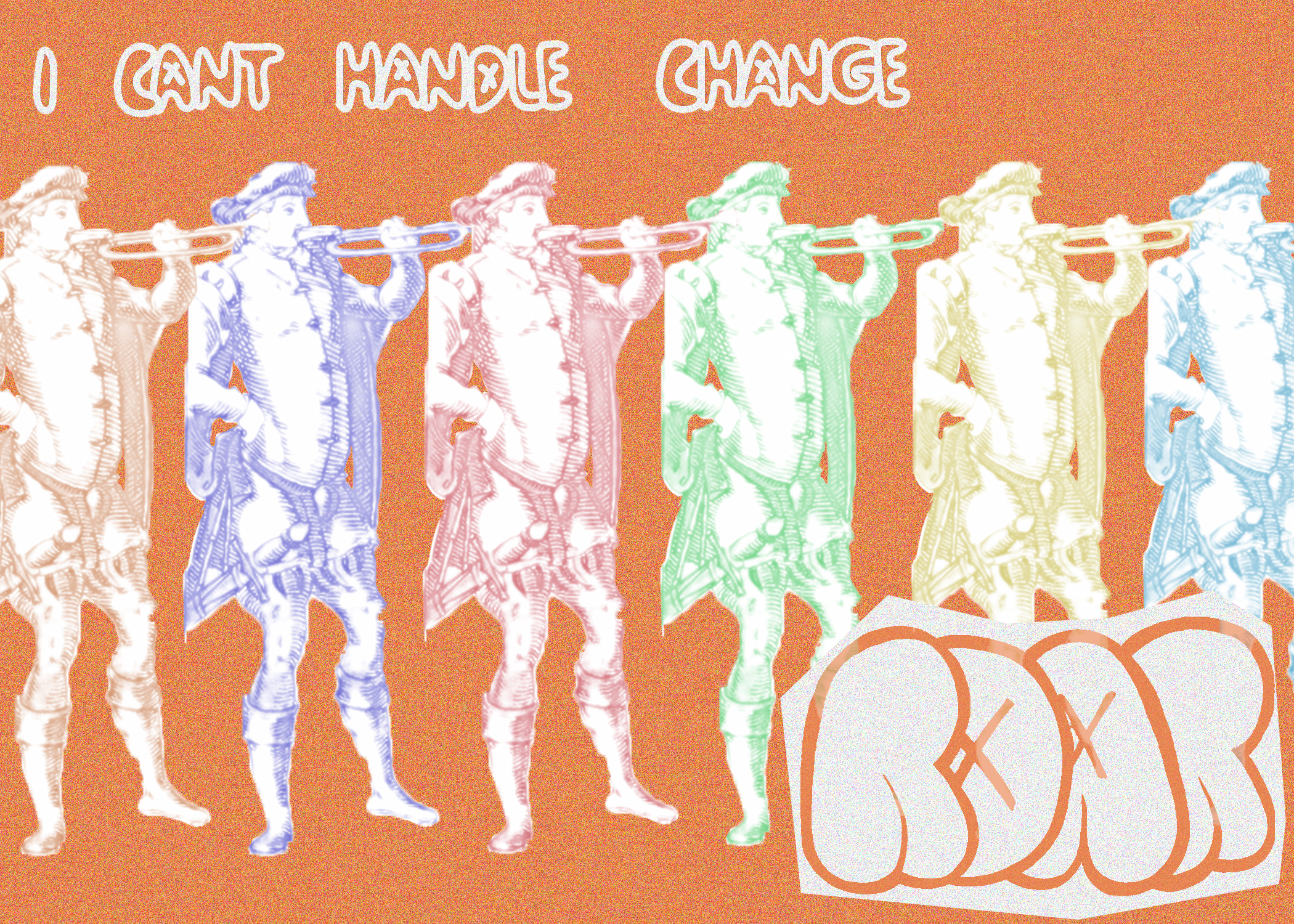 Amidst my tween to teen years of editing Call of Duty on YouTube, I came across a pretty strange album that for some reason I find myself coming back to again and again.

The six-track, 15-minute-long experimental pop, melancholy rock EP, I Can’t Handle Change, from Roar makes up for its lack of length with substance.

With the unexpected viral return of the titular track, “I Can’t Handle Change,” reviving the album through the likes of Tik Tok and Twitter, I felt this was an apt time to dive deep on what makes this album so timeless.

The EP features powerfully encapsulating songs with complementing conscious lyrics describing life, society, self-doubt, choices, and of course, change. Their sound is similar to that of The Beach Boys mixed in with Oliver Wilde, which is this melodic, rhythmic, all over the place, perfect sound. There is definitely a connection between the group’s sound and 60’s pop, potentially drawing inspiration from bands like The Hollies, The Ronettes, and Frankie Valli & The Four Seasons.

In my opinion, this 2010 EP is one of the most underrated collections of music of the decade. Whether direct or indirect, I see stylistic influences carrying to the end of this decade, even with critically acclaimed 2019 projects like Your Wilderness Revisited by William Doyle, House of Sugar by (Sandy) Alex G, and even Titanic Rising by Weyes Blood. I also see this EP being incredibly progressive with constant sound and style changes, thematic concept differences, and a cohesive transitive feel with subjective depth. There is something about this album that helps it resurface every few years through strange appearances across the web, but I will never understand the trends of the teens.

I Can’t Handle Change was released independently on March 14th, 2010 and was the Arizona-based group’s first product for the public. The group has released several albums since then including Pathétique Aesthétique, which came out this past year. While I like Roar’s newest album quite a bit, their first EP will always hold a special place in my heart. I have always wanted to own it on vinyl, but it seems from my research that many of the original copies were warped and came out pretty funky — not in the way you’d want.

The EP begins with my personal favorite and the title track, “I Can’t Handle Change.” The song starts off with one of the most soothing and wonderful guitar chords I have ever heard, something that captures so many feelings from joy to being lost. There is also a slowed version of the song — the one which has appeared on Tik Tok — which also makes it sound pretty beautiful, but the original mix is certainly superior. The song is a perfect in-between for the angst and the edge, featuring themes of worthlessness, self-doubt, and frustration.

Every line in the song is so raw and creates such an introspective look into the life of someone struggling with belonging and finding their own self worth. The final section of the song, before it cuts into the final guitar ballad, has a simple set of very powerful words.

Each line builds into the next, creating a build-up of energy and emotion. And by the time the singer has finished repeating the final line, the chorus comes in and creates a beautiful sensation of melancholy.

I think what makes this song so great is the build up throughout the entire piece. It begins with that amazing guitar ballad, transitions into a down-beat dialogue, builds up into a release of emotion, and finishes with those lovely chords. It almost makes you feel like you just won a battle, just a pure feeling of triumph and joy. At least that’s what I get from it.

There is also a great demo version of this track on the group’s bandcamp which features chimes instead of the guitars and is significantly softer in sound, featuring pianos, guitars, and quiet singing. It is much more of a concept track but is super awesome to see how they ended up getting their finished product.

The song is followed up by “Duck or Ape,” which focuses on life’s never-ending pointless and freedom driven cycle. The conscious reflection of the monotony of life is accompanied with a techno-like pop beat that create an ominous listening experience. The song sounds very epic, and almost “holy-like” while at the same time creates this eerie feeling that could be used in a horror movie trailer.

The lyrics almost make fun of death and the strangeness of life by talking about societal traditions surrounding funerals and hopes: “Corpses met with Hallmark afterthoughts/ Apparently they’re sorry for the loss.” The song concludes with, “You’re coming back a duck or an ape,” meaning that you start again as something significant or insignificant and nothing can change that. I find this track to be calming in the face of uncertainty and has helped me grasp the sense of never knowing universal questions regarding the realities of life, making me accept the fact that life makes little sense and to enjoy what I have.

The next song, “Heart for Brains”, follows similar themes as the prior with a focus on the harshness of life, but finding hope and protection within the company of close others. The song is softer than the first two but features an awesome progression of volume and instrumentation. The growth eventually clashes down with a soul-clenching, dramatic vocal performance from the lead singer with a touching repeating of the line:

“Life’s hard when you’re soft but you’ve got our love.”

“Baby Bride Rag” follows along and is a short, 55 second, barbershop quartet sounding song narrating a scenario between a couple where one is not sure about committing to the plans they had made and the other is reassuring how much they need the other. It’s pretty similar sounding to The Beach Boys but with darker undertones and lyric choices.

Not a super substantive song, but is a fun addition to the collection and transitions pretty well into the following track “Christmas Kids”, which breaks the trends of the previous songs. The group picks up the pace and creates a super groovy, rhythmic, dance track while continuing the dark lyrics and weird imagery which allegedly is about the abusive relationship between music producer Phil Spector and Ronnie Spector of the Ronettes according to Phoenix New Times interview with Roar. The song is a perfect blend between chaos, fun, and evil, which take you through many different tempos and genres, ending with a bang leaving you with a positive, tingly sentiment of “wow, what did I just listen to?” as you queue it up again for a second listen.

The six-track EP ends with the song, “Just A Fan,” which is a dark, twisted, introspective monologue towards a love they will likely never get. This song is basically the equivalent of the ending of “Stan” by Eminem, where a fandom completely takes over an individual’s identity and after long periods of time with no success of being able to get any closer to their star, the fan’s world inevitably comes crumbling down and they lose their own life. It’s a pretty dark track! Nonetheless, Roar manages to accurate a colorful and rich composition to illustrate the hope, internal doubt, and inevitable emptiness of the fan whose identity has been lost over someone they will never be with or become. Not a super cheery way to end an EP but given the course of the rest of this EP, I find it to be a very cohesive ending and concludes everything great about this collection of amazingly crafted songs.

In conclusion, this EP features dark, rich, experimental, zig-zagged tracks that still push the envelope for the development of progressions and themes in music despite being in 2010. The combination of different genre and theme dabbling range from rock to jazz to holy orchestral to something depressing that Have A Nice Life would put out. There is so much packed into this short fifteen-minute collection, and if you have any time to spare, I would definitely recommend checking it out, once, twice, or maybe dozens, there is a lot to digest here. I think this EP qualifies as a 10/10 in my book, but see for yourself.

You can check out the music video for the titular track below.