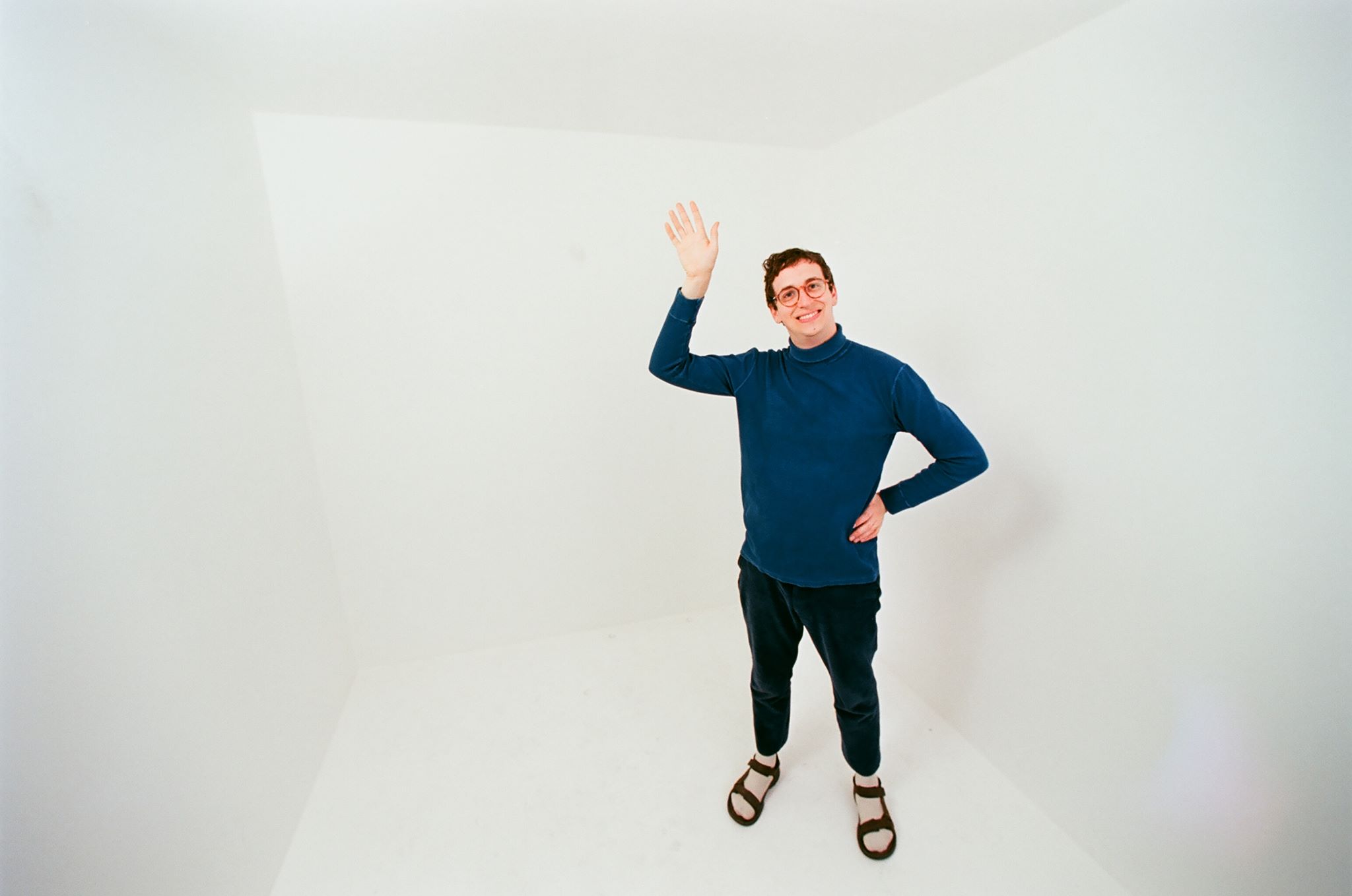 It’s easy to view the world through a lens that categorizes and boxes, shoving people and feelings into cute little two-dimensional pictures with easy-to-read captions.

It’s a phenomena that’s immersed itself into our culture and, in many ways, has limited our ability to express art with integrity.

Lucas Nathan, the man behind the pseudonym Jerry Paper, strives to exist outside of this realm, instead immersing his art in a world that rejects any sort of classification.

I was lucky enough to chat with Nathan over the phone and, in lovely detail, he spoke to me about how breaking binaries has motivated his self-expression and changed the nature of his performance.

EH: I wanted to start off by going a bit back in time. You’ve mentioned before that there was a time in the past, especially when you were just starting to make music, where you didn’t like certain genres, which is exactly why you started making those kinds of music. Has your motivation for creating changed since then?

LN: Yeah. In some ways yes and some ways no. I mean, I wouldn’t say that’s why I made music, that’s why I started to make electronic music — which was to push myself and kind of try to get rid of the ideas I had about things. In that way, that’s definitely still a pretty central part about why I make music intellectually and outwardly.

But, me, I just make music because I like to make music ultimately. There’s no motivation besides the fact that, if I don’t do it, I feel pretty sad. But, I mean, that’s definitely the central part of my performance — to get other people to do that as well. Get rid of their ideas about the self and their ideas of what makes them who they are. At that time in my life, something that I found to be central to who I was was the kind of music that I liked. And then, you know, gradually I’ve worked my way to a place where I just liked music and I don’t think about in terms of what kind of music it is. I began to take things a little more openly.

At this point, the sound of food spilling into a bowl tumbles through the phone speaker.

LN: Sorry, I totally forgot you were going to call. I’m in the middle of feeding my cats.

EH: No worries! Speaking of the self and trying to reach beyond that. Why did you decide to have a pseudonym? Why Jerry Paper?

LN: When I was starting to make music,  like publicly, or whatever, putting my music out there ― I mean, I’ve always made music ― but, I wasn’t so comfortable being open. Or not open. More, like, baring myself. It’s easier to do that in another game.

And yeah, it worked. It’s easy to bury yourself. You feel like there’s a layer between you and whoever’s seeing it.

EH: Right. I noticed that in a couple of your shows you dress androgynously. Do you think that having this character of Jerry Paper has allowed you to push boundaries in terms of your own self expression?

LN: Yes, definitely. I mean, when I was younger I dressed very androgynously and maybe 14 through 16 I was really…

He yells away from the speaker to his cat.

LN: Poo Poo! Did I lock him in the closet?

He lets out a burst of laughter into the phone.

LN: Yes I did! I closed the closet door like 30 minutes ago. I was like, he’s probably not in there.

His voice becomes a bit muffled, and it’s clear Lucas is wording a most sincere apology to Poofy.

LN: I have two cats and Ernie is like super chill — he just, you know, eats in the same place. He’s a little bit normal. And Poofy is like a total nut job; every time I feed him I have to follow him around and he shows me a different place he wants to eat.

LN: Show me where you want to eat!

Lucas then returns to our conversation.

LN: When I was younger I dressed much more androgynously and was a lot more open with that side of myself. But, even though I grew up in LA and it’s a pretty liberal place, I would still get driven by and people would yell homophobic things at me.

Like they would just yell shit that made me feel… I don’t know, it was fine for a while, and in the beginning I was like, fuck this, fuck them, like I’m working and I don’t give a fuck. Then, after three years of that, I kind of got worn down and I was just tired of getting yelled at on the street. I was just sick of this, and I cut my hair and I started to dress a little more generic man style.

Like, music performance has always been a place for me to fully just let that out. And now I feel like I’m a little more… Like I still just don’t really like talking to strangers. The more flamboyantly I dress, the more conversations I’ll get into, so I generally dress in a way that people won’t talk to me.

I still wear a lot of colors that I like. I mean, I guess maybe that’s an admission of weakness or something — that I would rather change an aspect of myself then just wear it proudly and get berated on the street — but I kind of just don’t care, and I’m happy being quiet outside and being loud on stage. I don’t know. I’m happy with the way my life is.

But yeah, that’s definitely you know, part of me that I’m comfortably with bearing on the stage.

EH: Yeah, it’s cool that you still have an outlet for it — which is the stage.

LN: I mean yeah, you know, a lot of people don’t. The thing is, I don’t know anything, but I do know that people are complicated and everyone has so many different aspects of themselves. Genre of music or gender of people or anything that’s separated into categories is reductive and it’s not real. Certain aspects of these things can be helpful when, like, trying to understand certain things, but to act like they’re the truth about the world, I think is absurd.

When I’m sitting down alone to make music and when I’m performing are different outlets of different things. Performance is very much like breaking down — and I don’t think I fully succeed all the time — but I’m trying to get people to break down their ideas of themselves and break down their ideas of what makes them themselves and just understand that they will never be captured in language. Everyone is so deeply complex, and you should let yourself, in moments, just feel that.

EH: And would you say your music allows people to reach that space that can’t really be described in words?

LN: I hope so. I mean, I don’t think I have the authority to say that.

Music, to me, is a language in itself. I’m not going to transcend language with music. The structure of a song is very well-trodden. It’s definitely a defined thing that signifies different things. The chorus signifies certain things. Even sometimes I’ll write a linear song, where no part repeats, and my dad and I will be discussing how to perform it live. They’ll keep referring to just one part of the song as the chorus, even though it is not a chorus because the song is structured differently. They’re just certain symbols in music that you can’t really escape from.

When I first started making music when I was younger, I was trying to then, and now I’m just like, no, I’m working with symbols. That’s what making art is. If you’re not communicating anything with the symbols, then what are you doing? To me, writing music is very much trying to communicate something with lyrics or providing a template for people to create their own meaning from. The same goes with music. I’m just trying to express myself and to put a piece of myself into something.

Does that make sense?

EH: Yeah, I love it. I think it’s super cool. It’s cool to hear everyone’s take on their creative process and what their goals are in creating art, in terms of themselves and when it comes to there being an audience.

I’m going to switch gears now with a different question.

Who do you think your most unpredictable bizarre music influence is? Someone that we would never assume based on that what you create and the persona you give.

LN: I mean, what I listen to creates the music that I make. So, I don’t really know. I mean, I really like Alanis Morissette.

EH: How about a favorite moment a specific lyric you wrote reminds you of? Do you have a certain lyric or maybe a certain song or even just an album that’s based on a moment in your life that was pivotal to some creation?

LN: There’s one that comes up for me while you’re asking the question, and I’m not even sure if I’m really answering it. But there’s a song on a split EP I did with my friend Andy and my side of it is called The Now Sound for Today’s Lovers and the first song on that is called “Funny Girl.” That song definitely played a big part in my life, because I started dating a woman who’s now my wife when we were 17. I think when we were 22 — we’d been together for like five and a half years or something — and we broke up. Towards the end of our relationship, when we were broken up, I wrote this song and I sent it to her. It was a pivotal moment in our breakup, where it started us talking again. Now we’ve been together for twelve years.

That’s an important song for me. Very much raw, extremely honest lyrics that I wrote specifically so I could try to communicate these things that I didn’t know how to say.

There is a brief moment of silence.

EH: You recently came out with a remix of a Sunset Rollercoaster song. “Villa,” I think it’s called. Why did you decide to work with their stuff in particular?

LN: This woman Angela is managing them, and I know her because she used to work for sunstroke, and she just asked me if I would do it. No one’s ever asked me to remix anything before, and I’d never tried it, so I figured I’d give it a go.

Eh: Is that different than creating your own song?

LN: Yeah, it was just fun to mess around with.

EH: Is there anything besides that that’s happening in the multiverse of Jerry Paper at the moment?

LN: Yeah, I just got back from a long tour and finishing up a record so that’ll happen next year.

EH: Hanging out with your cats.

LN: Yes, spending a lot of time at home with my cats. Yeah, nothing more than that really. I guess that’s a lot.

Ethan Hundertmark is a Cal Poly Philosophy junior and a KCPR staff member. He conducted the interview. Featured image credit to Jerry Paper.