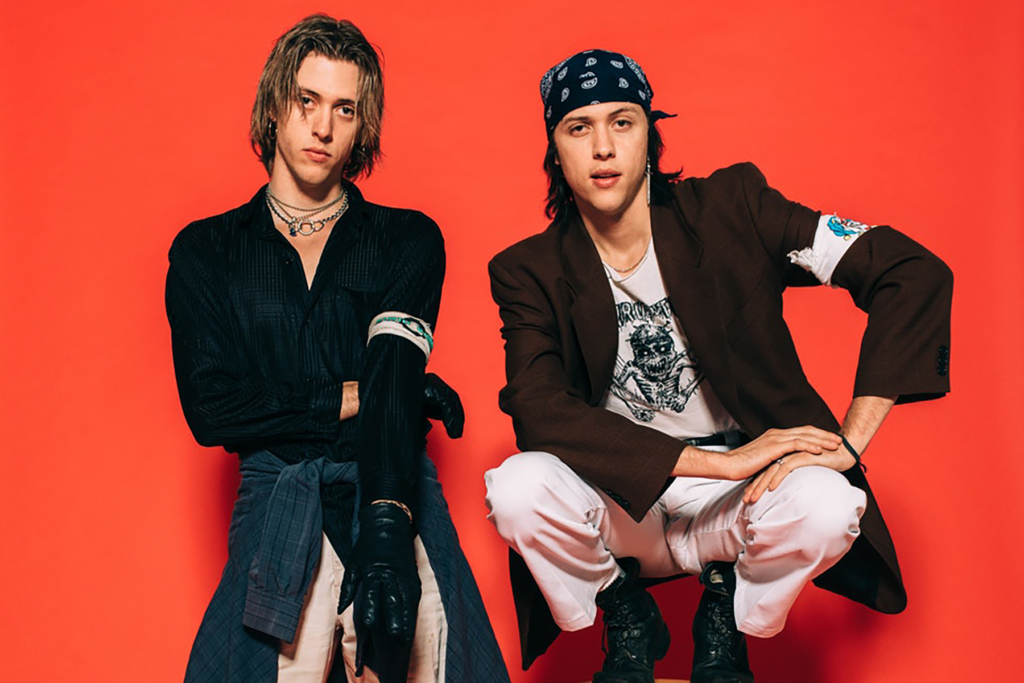 It’s dark, it’s loud, there are two identical jester figures performing acrobatic feats in your face, someone is screaming, you aren’t sure if it’s you or one of the jesters.

Oh, shit, one of them is playing the bass guitar. Nice.

You look at the crumpled piece of paper in your sweaty, sweaty hand and realize two things. First, you realize that you’re still using a physical paper ticket stub in 2019. Second, you realize that the ticket stub is for The Garden, and while you aren’t even close to less confused, you at least understand what’s going on.

Vada Vada. That’s what’s going on. Total pandemonium as a form of joyous expression! That which is being expressed to you right now, it could be anything. The factual statement that yes, you do have a face, perhaps that you should call THIS number NOW about it. What? Doesn’t matter, keep dancing. It’s a completely made up term made to describe the type of music The Garden makes, something they find uncategorizable with conventional terms.

Beyond the chaos and confusion, there’s a lot that’s pretty simple to The Garden. The skeleton that makes up most of their music mainly consists of Fletcher Shears on drums and twin brother Wyatt on bass guitar (don’t worry, we’ll talk about the bass). Throw in some electronic eccentricities, and of course either Fletcher or Wyatt performing vocals, and you have a working idea of what you get when you listen to The Garden. Through trust me, a working idea usually isn’t enough to prepare you for what you’re about to get into.

Essentially, the creative process behind The Garden is constant growth and development, always doing something new. Punk, hip hop, new wave, dark wave, wave wave, Vada Vada, yadda yadda- it extends to their music in the studio and their live performances. One moment, Fletcher will be performing a drum line, then he’ll record that drum line and loop it, next thing you know he’s off dancing, doing somersaults,  the drums are playing themselves, Wyatt’s laying down some sick bass licks (again, we’ll get to it), and you don’t really know what to do other than dance it out. It’s dynamic, it’s lightweight, and it’s pretty damn exhilarating

That isn’t to say The Garden doesn’t have their own staple sound. For example, Wyatt Shears’ bass playing (got to it!). If you hear even one note of one riff, you know you’re listening to The Garden. It’s like listening to a bulldozer tearing down the freeway at 120 miles an hour, heavy and absolutely destructive on some songs. And yet on other songs, that heaviness is repurposed into something dramatic, larger than life, and nostalgic. Their big song, “Egg,” is a great example of this. I dare you to listen to it and not feel at least some level of catharsis. Go ahead. I’ll betcha five bucks.

And that’s the thing about this group. You think you have them pegged down as a “weird band,” and then they hit you with absolute slammers like “Thy Mission,” or “Call The Dogs Out.” And I think that just speaks to how seriously they take music as a creative pursuit. So often you’ll have bands that are obviously trying to be the jester of the court, starving for recognition and a wayward chuckle. They say ridiculous things, sing ridiculous songs, for no other sake than to be ridiculous and gain notoriety for it. These aren’t really jesters, but fools — and selfish, vacuous ones at that. A true jester lives to entertain others above all else, and takes the craft of entertaining seriously. And while the very act of entertainment might seem steeped in frivolity, the earnest dedication that The Garden puts toward it is commendable.

So, if you’re interested in being entertained by two serious entertainers, you might be pleased to know that The Garden will be performing this Friday, October 25th, at SLO Brew Rock. Be there, or end up looking like a clown.

Jake Davis is a Cal Poly Journalism senior and a KCPR staff member. He wrote the article. Featured image credit to The Garden.

An Insider’s Guide to Vagabond Music and Arts Celebration

Riot Grrrl: The Story of Women in Punk Rock