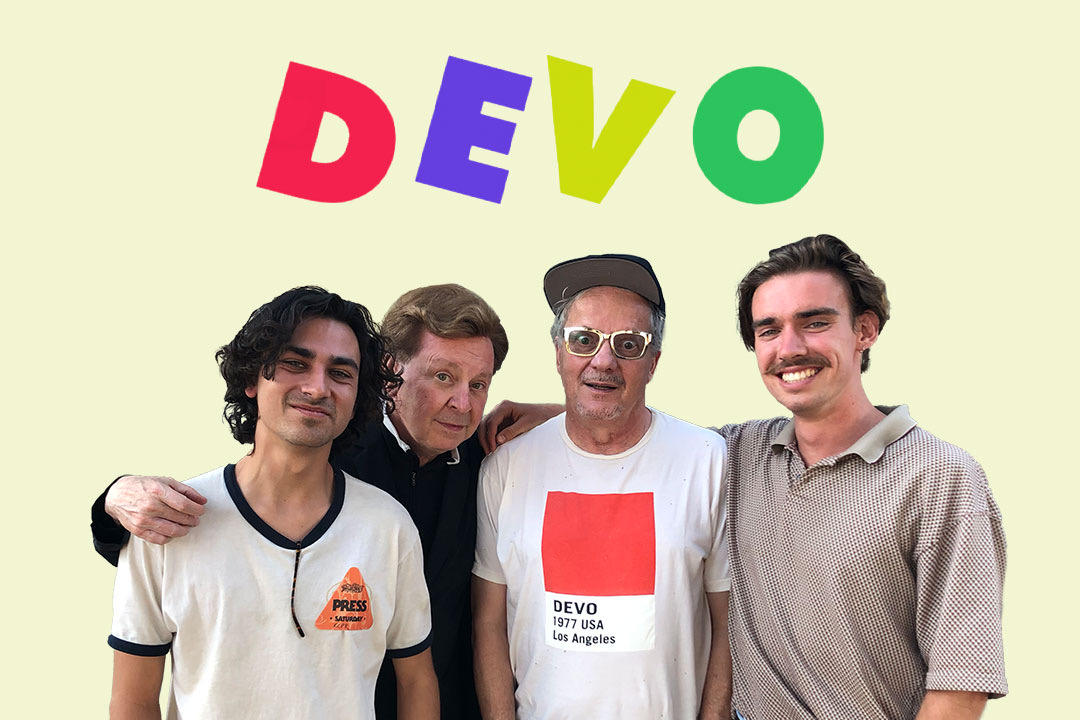 In the early ’70s, a handful of art students took the stage in bright yellow coveralls, monkey masks, and funny red hats, chanting experimental tunes about the “Devolution” of mankind.

We live in the dystopian future where they were right.

“We were hoping we were just being paranoid,” co-founder Mark Mothersbaugh told us.

The origin story that brought Mothersbaugh and Gerald Casale together is much more bleak than the eccentricity of Devo lets on. The two met at Kent State University as art students and started the band as a platform to spread their avant garde philosophy of “De-evolution.” When bullets were fired on May 4th, 1970, however, that philosophy was no longer a joke. The Kent State Shootings and the following Vietnam War protests were not only an unarguably definitive moment in the history of music, but in the history of the United States itself.

Understandably, the two men sat across from us are just as cynical of the current political climate as the two long-haired, liberal music nerds sweating in the only air-conditioned room for miles (yes, that’d be me, as pictured above). After watching years of what some might politely call “political catastrophe” unfold in front of all of our eyes, it is apparent to the four of us that they were right. Devolution has already passed us by — we’re living in it.

Just on the other side of the fences that separate the artists from the general admission crowd is a swarm of Desert Daze attendees. Today, Devo is headlining, and the standard crop of twenty-somethings in striped shirts has collided with the most dedicated spuds of Club Devo. The words “Farewell Tour” have been thrown about in the buildup for this night, and eager fans from all walks of life are adorned with their very own Energy Domes.

Though none of us are wearing the ziggurat-shaped hats, the ideology that is “Devo” united the four of us before we had even shook hands. We had a chance to talk to the guys that predicted the future in the future that they predicted. This is that interview.

JM: Do you guys know much of KCPR, or is this just a lucky coincidence?

GC: Well, we’re just meeting up with you. Tell us more.

MM: That’s where we fit in!

JM: Exactly! I play you guys on my show all the time, so I’m a little starstruck to be here.

JM: Well, I don’t know. One of my favorites is Slap Your Mammy.

At this point, Jerry lets out a hearty chuckle.

JM: Every song you played in sound check sounded amazing. We had a blast dancing to it at our camp site.

MM: Well, we did something right if it endures and people like you like it. We’re senior citizens now. 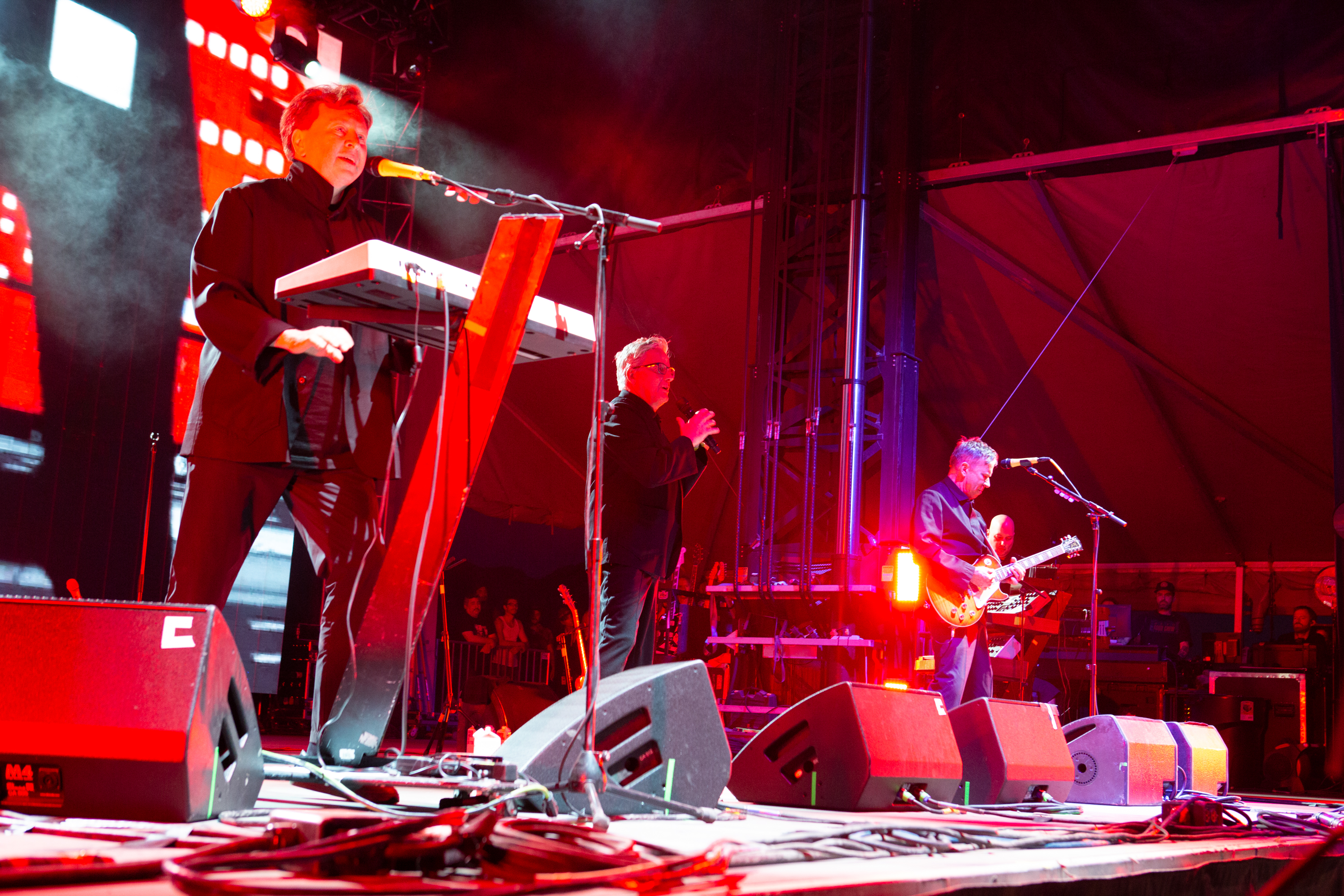 JM: I wanted to ask you guys for a quick update. How’s living in a post-Devolution world treating you so far?

GC: I can only speak for myself, it’s not funny.

This time, when Jerry laughs, it does not come from his chest. It is nervous laughter.

MM: And then he laughed!

GC: Well, what else are you gonna do? It’s gallows humor time. I mean, clearly, what I’m seeing is actually mind blowing. For all of our clearheaded visions of a dystopian future that we used to posit to people, I don’t think either of us thought it could ever be this low and this bad.

MM: We were hoping we were just being paranoid.

GC: Like canaries in a coal mine. You know, like, “It’s a warning, it’s not really going to happen.” But, it did, and it “trumped” our fears.

JM: Well, then, if you could go back in time to 1968 and send yourself a message, what would you say?

GC: What would I say? Kiss your ass goodbye.

JM: What about you Mark? Anything?

MM: I’d just remind people that they should choose their mutations very carefully.

JM: That’s very poignant. I wanted to ask, we saw Fred Armisen earlier and we know you’ve been working with him. Do you think he’s only working with you so that he can make a good mockumentary later?

GC: I wish he would! That would be great.

JM: How’s the band dynamic when he’s on stage?

GC: We love Fred. He was great in Oakland. He saved us, we couldn’t find a drummer.

JM: He’s a real class act. I also wanted to ask — what’s in your doomsday prepper vault? Have you started it yet?

JM: Yeah, as in, do you have a big underground place to go to just in case things hit the fan?

GC: See, that’s a fantasy I think. The, “you can run but you can’t hide,” or “there’s nowhere to hide” — whatever all the cliches are — it’s like, where are you going to go, really?

MM: It’s kind of bigger than that. We’re in a time where things could change enough that it would end the species. At least, our species.

GC: I think that’s why there’s a movement now that’s aware of that. They’re called extinction something. And, it’s not bullshit. Because the tipping point that has been warned about is now here, with 7 billion people on the planet and chaos reigning as the leading factor of how people make decisions — chaos and fear.

GC: Guys like Trump are a dime-a-dozen around the world. Many world leaders are like him. It’s diabolical, right? Because he represents nihilism. He represents complete self destruction, like the guy riding the bomb in Dr. Strangelove. Going, “Wahoo! Pollute away, let’s go!” And you’re watching. You’re watching fear take over and people give up. And there’s no we. There are smart people that know better, but they’re not the ones in control. They’re not able to stop the train. And we’re just watching the train.

JM: I couldn’t have said it better myself.

JM: Well, in a time like this… Mark, I know you’ve worked in TV and Film doing scores — for example, Rugrats and 22 Jump Street — do you feel that Devo is meant to be the soundtrack to our lives?

GC: It was the soundtrack to some people’s lives.

GC: Devo is like a state of mind. It’s a gestalt. It’s bigger than the five guys on the stage. Obviously, two of the guys that are there tonight weren’t around for the first pass of Devo and Bob Casale and Alan [Myers] have entered the next dimension. But, Devo, because it is an idea, can go on without particular people. It’s like the Blue Man Group.

JM: We see that out there today — everyone out there is wearing the Devo hats. Whether or not that image is still around, it’s the idea that persists to this day.

GC: That’s pretty gratifying that we did something that had enough substance that, 40 years later, people that could be our grandsons and granddaughters, there’s something that resonates with them about us. 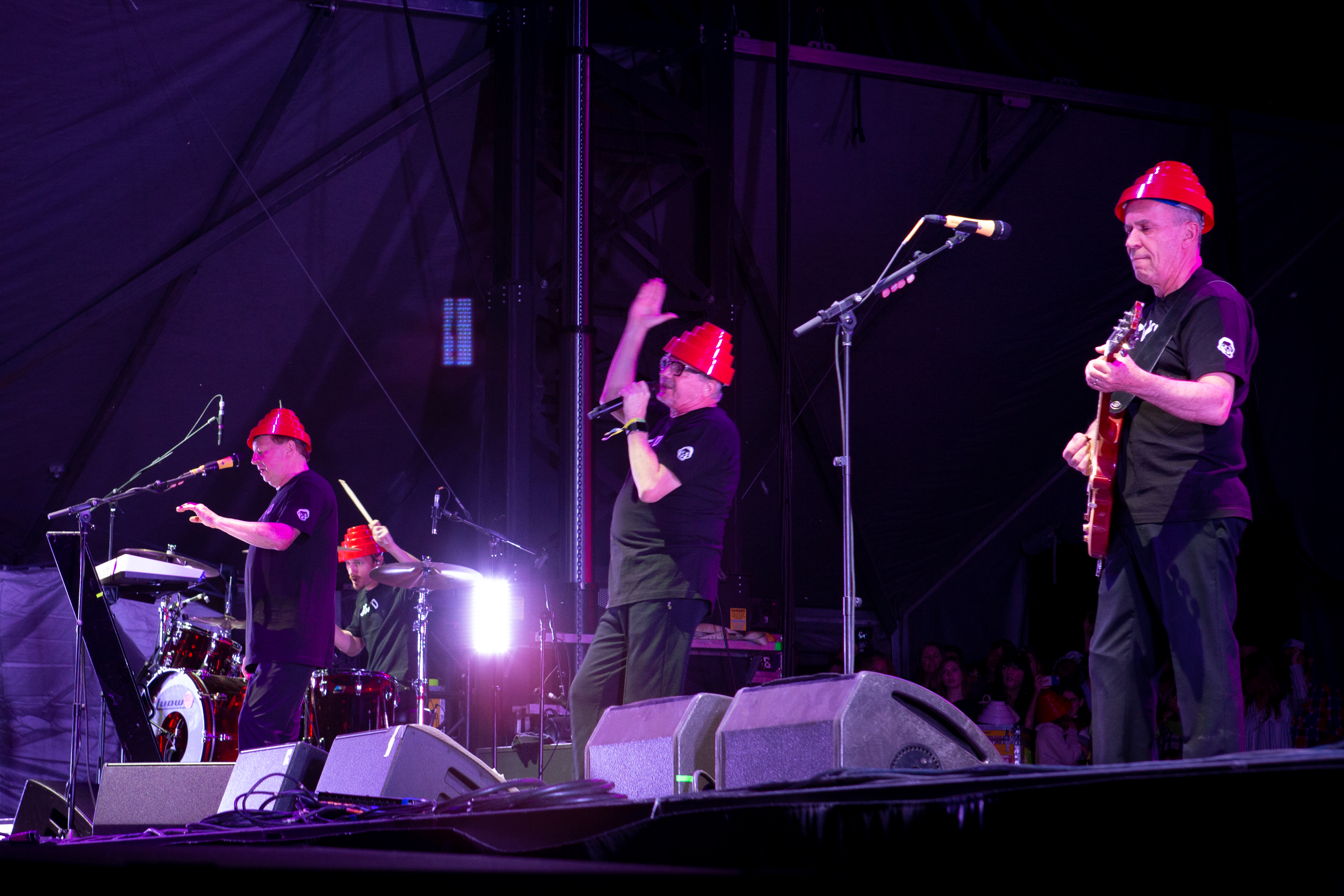 JM: While we’re talking about the modern day, who do you think was more right about our future: Orwell or Huxley?

GC: Well, when I think of Animal Farm and 1984, I vote for Orwell. What about you guys?

JM: I think Orwell might do it for me.

MM: Or, they get the job because they’re willing to go get plastic surgery.

GC: I mean, you should be really pissed off, right?

GC: Morons and clowns like Trump are stealing your future.

DM: You see that a lot with the youth climate we’re in right now. Younger people like Greta Thurnberg, for example, is like, 12 or 13 and is heading this movement. Like, what is going on?

GC: Because it has reached that critical mass point where something’s gotta break. It can’t just keep going like this. You know, where’s our Hong Kong? We should have Hong Kong going on here. But people, like Mark said, are busy just wanting to keep their jobs and go to Starbucks and get a Frappuccino.

MM: Or get the next iPhone.

DM: I’m riding this iPhone 6 until it dies.

JM: So, Mark, how is the Electronium going?

MM: You’ve got to say that one more time.

Jerry leans in to clarify what I said.

MM: Oh, the Electronium! It’s in the Museum of Computers up in Mountain View right now. Actually, there’s a bunch of them, that’s just where the biggest one is.

JM: Have you guys ever considered filling out a Freedom of Information Act Request Form and never doing interviews again?

This time, both of them laugh aloud.

MM: All of the things that we talked about the first time around were fresh when we were young and we were excited about it. Most of the people interviewing us didn’t take us seriously. They thought we were kidding. But, if you could replay all of those again, they stand up pretty well.

GC: At the time, like he said, when you’re young and your ideas are brand new, you think you’re reinventing the wheel. You’re really strident and intense about what you’re saying. That’s when I read that, I go, “Yeah, I wish I could feel like that.” Now, I just feel jaded and wary of everything. Because, this seems to be — what we can count on with human beings — is the worst case scenario. Curb your enthusiasm. Don’t get excited about anything good.

JM: Well, I know we have to wrap it up, but, are you guys surprised I haven’t brought up “Whip It” yet?

GC: And, don’t worry, we’re all going to Mars with Elon Musk’s SpaceEx.

MM: It’s not the prettiest landscape, but I’m sure with some virtual reality we can make everything look like paradise out there. One giant parking lot of paradise.

GC: I love it. It’s such a wrongheaded, incredible fantasy. Have you seen the rocket ship? It looks like its from a tabletop model from Flash Gordon’s series back in 1939. It looks like a prop! “We’re all going to die!” And everybody goes, “Yeah!”

JM: I want to end on a note of hope. Are there any modern bands do you think are reversing the effects of Devolution?

GC: Myself, I can’t say that I’ve kept up enough to be able to answer that. Maybe there are, you might know them. Maybe I haven’t heard them.

MM: I really think there’s a sentiment out there. I hear things all the time where people are pissed off and questioning what the status quo is.

GC: The big word you threw out was a “band” and I don’t see “bands.” I love bands, you know, they create a whole alternative world and a point of view that goes on and on. I see things like Childish Gambino doing “This is America” and I get jealous of how good that was, but it’s a one-off thing.

MM: We were pretty obsessive and single-minded when we started. I think it is hard to find a band that have that same passion. I’m sure this is the year where it’s going to happen. Kids are realizing, “Our parents were a bunch of fuck-ups.”

Finally, everyone in the room laughs together.

Jakob McQuade is a Cal Poly Journalism senior and KCPR’s Editor-in-Chief. He wrote the article, created the featured image (with the help of Ally Millard), and conducted the interview alongside Drew Morrison, Cal Poly Environmental Management and Protection Senior and KCPR member. Supplemental images courtesy of Desert Daze 2019.

Phase II Transmission of the Desert Daze Lineup Has Arrived