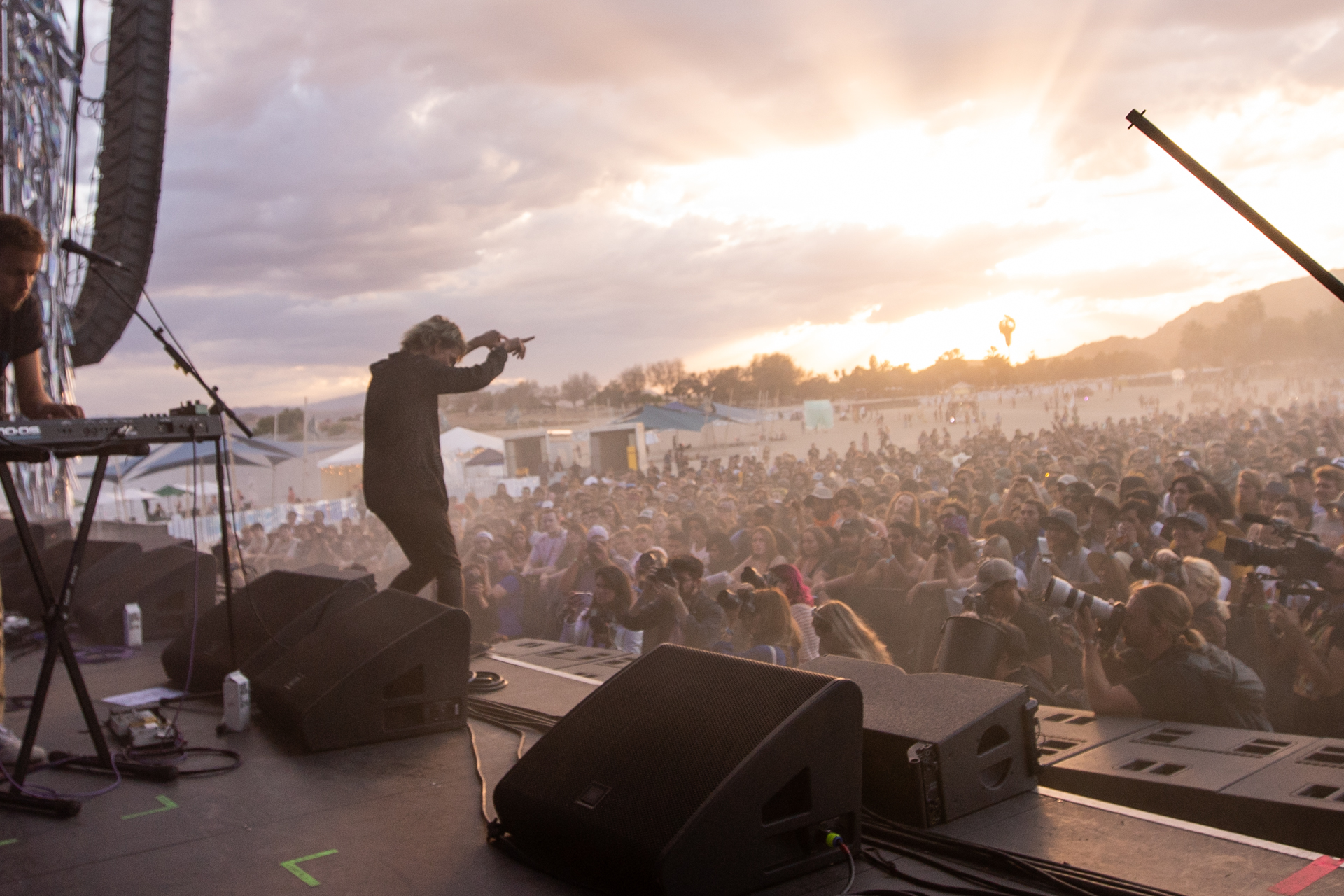 With their stacked 2019 lineup, the annual Desert Daze festival brings us a delightful blend of proven independent music heavyweights and up-and-coming artists.

Taking place in the otherworldly Lake Perris from October 10th to 13th, this year’s transmission serves both as a blasting off point for young artists and a farewell to long-time favorites heading into the great beyond.

The lakeside location invites festival-goers to “float metaphorically, spiritually, or literally in a lake while your favorite artists sonically bend the air and water around you.” If that doesn’t sell you, festival organizers have gone as far to promise “virtually no dust.” Location aside, this year’s sonic lineup is so good that I would still be frothing at the mouth to attend even if it were held in a garbage dump.

This year’s headliners are some of the best the Milky Way galaxy has to offer. Don’t expect a greatest hits compilation from these artists however, as each day’s biggest act will be performing one album in its entirety. We’ll be hearing Flaming Lips orchestrate The Soft Bulletin, Ween bring all the absurdity of Chocolate & Cheese, and the Wu-Tang Clan snappin’ necks with 36 Chambers. This way, attendees will get a fully cohesive set that brings the listening experience of a full album straight to their ears.

Desert Daze rounded this year’s supporting artists up from a plethora of locations. Pulling Stereolab out of retirement and serving as the biggest stop on their first North American tour in over a decade is just the beginning of a long list of incredible acts. This year’s festivities are sure to delight any resident of Planet Earth; featuring numerous international artists that KCPR knows and loves such as Altın Gün of The Netherlands, W.I.T.C.H of Zambia, and Shintaro Sakamoto, a legendary Japanese psych rock artist whose been in the game for over 40 years and has never made it out into the States until now.

In addition to gathering talent from across the globe, musicians from every crevice of the nebulous “psychedelic” genre will be in attendance this weekend. Us soft boys can rejoice due to the soothing sounds of acts like Faye Webster, Connan Mockasin, and Khruangbin. On the contrary, harder acts like Viagra Boys, Metz, and Pussy Riot, whom you might remember from last year’s World Cup Final, will provide plenty of opportunity for borderline civil disobedience. Or maybe you find yourself somewhere in the middle, enjoying acts like Animal Collective or Parquet Courts, whose most recent release Wide Awake! was voted KCPR’s favorite album last year. Regardless of your musical preference, this year’s lineup is bringing something for everyone.

Even if you think all of this year’s musical guests are whack, Desert Daze’s multifaceted artistic approach will still have enough to keep you entertained. Flying Lotus will be performing his signature 3D experience, working as a middle ground between a visual showing and a live set. On top of that, Les Claypool, the legendary bassist and lead singer of Primus, and Sean Lennon, son of John Lennon, will be hosting a Q&A session. Another informative presentation will come from the documentary We Intend To Cause Havoc, which explores the zamrock band W.I.T.C.H’s rise to fame in Zambia during the 1970s. Even Fred Armisen managed to sneak his way onto the lineup with his act “Comedy for Musicians but Everyone’s Invited.”

Anyone who’s fortunate enough to be in Lake Moreno this weekend will undoubtedly be blasted into the stratosphere by the wide array of artists that are also making the trip. For fans of indie rock, especially when it’s soaked in reverb or splashed with a little fuzz, Desert Daze boasts one of the most impressive lineups to date. The full thing is below. 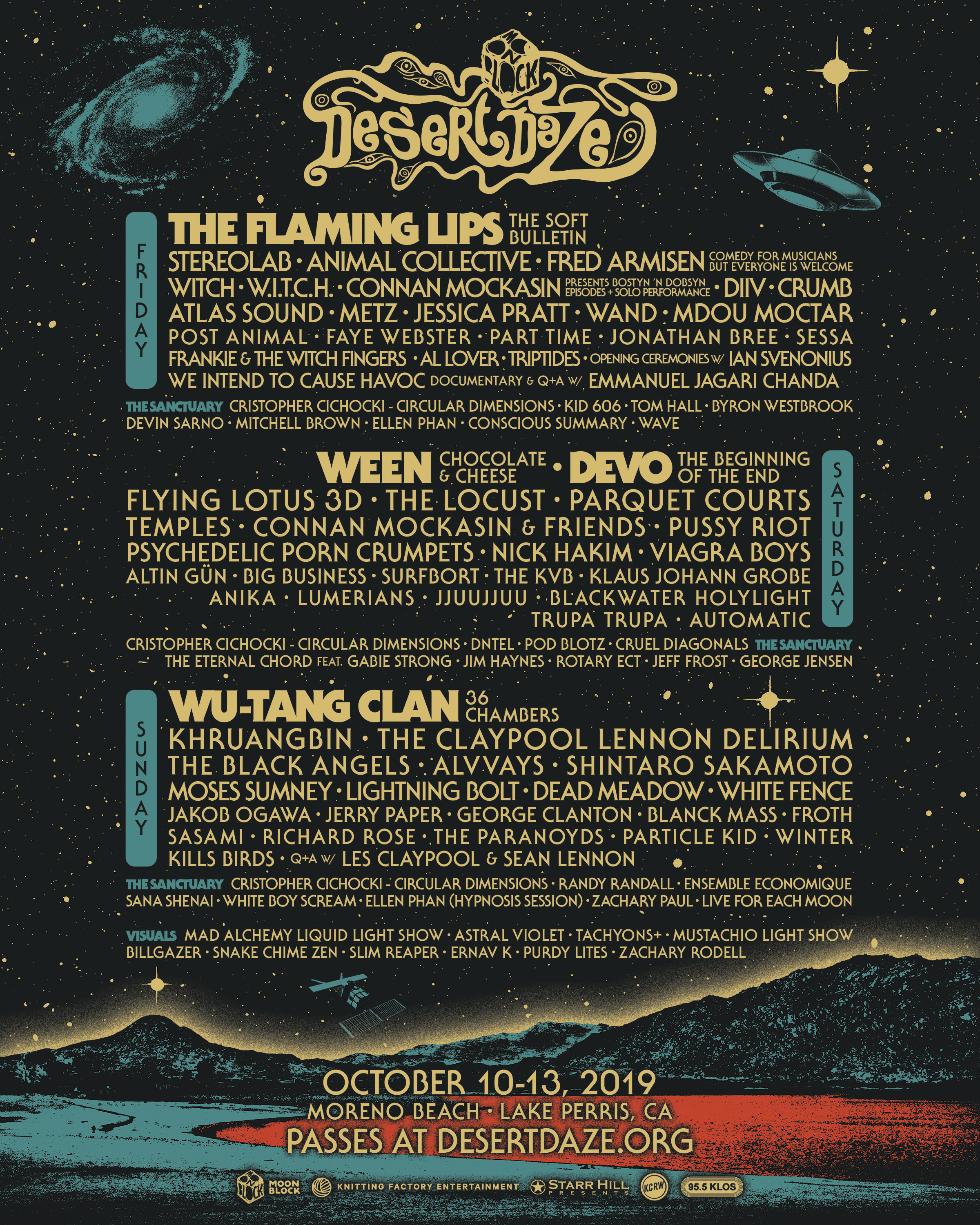