This weekend over 25,000 music lovers will converge along Buena Vista Lake in Central California to enjoy an eclectic mix of electronic, indie, and alternative acts.

Ranging from globally renowned DJs, like Damian Lazarus and Flying Lotus, to indie fan-favorites such as Toro y Moi and Khraungbin, the options are plentiful.

Too many options is never a bad thing when it comes to music festivals, but with LIB’s lineup totaling well over a hundred artists and spanning over such a variety of genres, picking which sets to see may seem daunting. Lucky for you, we at KCPR have highlighted seven can’t-miss artists that will make your LIB experience one to remember.

Steven Ellison, known affectionately as FlyLo, has established himself as one of Los Angeles’s most innovative musical presences with his potent mix of EDM, jazz, and hip-hop. With his first album since 2014’s excellent Your Dead! due to drop later this month, fans should be eager to see what the Brainfeeder mastermind has been cooking up. Also, as if new music from FlyLo isn’t enough of a sell on its own, the visuals for the whole show will be in 3D. With Flying Lotus steering his set into new sonic and visual dimensions, this set is shaping up to be a can’t-miss musical experience.

Chaz Bear’s musically shape-shifting project Toro y Moi has veered from chillwave to psychedelic rock to synth pop and house over the years, but his knack for writing songs that you want to get lost inside of has remained constant. With his most recent release, Outer Peace, Toro y Moi have given us some of 2019’s best synth pop tracks (“Ordinary Pleasure,” “Freelance”) and the always eager-to-dance LIB crowd will likely lead to an inspired performance from an oft-reserved Bear. With his wide-palette of sounds and styles, this should be a varied set with something for everybody.

If their Spotify playlist is any indication of what the Howard brothers will be mixing into their sets we’re in for a treat. Disclosure seem reinvigorated, after what seemed like a less-inspired Settle with their sophomore album Caracal. Last year’s string of singles that they rolled off seems to indicate a return to the studio as well, which means we could be in for some unreleased tracks. Disclosure will be the closing headliner at the Lightning Stage for the festival this year, which has all the makings of a classic dance party.

TLDR: Great way to finish out the festival; plus, there could be new Disclosure dropped.

Sample Tracks: “Moonlight,” “Ultimatum,” “When a Fire Starts to Burn”

The joining of these two Dirtybird crowd-pleasers will no doubt be bringing the party to the Woogie this weekend with their Friday evening set. New York City’s Sam Walker and Gavin Royce began producing tracks together as Walker & Royce in 2011, and the success of their unique brand of bounce-inducing and groove-heavy tech house tracks like “Take Me to Your Leader,” “My Own Thang,” and “Role Models,” have made them one of the hottest names in house music over the past few years. They’ll be joined by Ardalan from Tehran, Iran and who also knows a thing or two about how a healthy injection of some gritty, nasty bass into his sets can send a dance floor into a frenzy.

TLDR: Go celebrate the first night of the weekend with a party tech set of the highest caliber.

This three-piece trio hailing from Burton, Texas have been quickly ascending up the indie ranks with their genre-confounding blend of Thai funk, Persian rock, soul, psychedelia and surf rock. While the debate regarding the band’s musical genre rages on, there’s really no debating just how undeniably groovy they are. Their head-turning Coachella set was frequently noted as one of the weekends finest with airtight instrumentation, an absolutely locked-in crowd, and seamless transitions from G-Funk covers like Warren G’s “Regulate” into surf rock classics like the late Dick Dale’s “Misirlou.” Given their current touring form, their Sunday night set should absolutely captivate anyone within earshot.

TLDR: Go for the cool wigs, stay for the scorching instrumentation.

As one of most revered names in house and techno over the course of the 2000s, Damian Lazarus will be taking the Woogie on a three hour journey as the final day of LIB descends into the final night. Always the evocative storyteller, this set will undoubtedly be an incredible soundtrack for the final sunset of the festival. As founder  of the Crosstown Rebels label, his taste-making abilities have helped springboard artists like Jamie Jones and Maceo Plex into some of electronic music’s most respected names as well so you might want to keep Shazam handy. The time and place for this set are perfect and Damian has shown time and time again that he knows how to weave a spellbinding set that’s just right for the setting.

TLDR: Bust out those Skechers Shape-Ups because you’ll be locked in for three hours.

As one of the most colorfully adventurous producers in techno right now, whatever DJ Koze seems to do manages to be oft-kilter, whimsically psychedelic, and somehow bound together by his hip-hop background. While that might sound like contradictory, DJ Koze manages them seamlessly into a world that’s entirely his own. The Germany-based founder of Pampa Records has crafted some of the most infectious house and techno tracks and remixes over the course of the last decade. With him coming off the widespread critical acclaim of his 2018 album, Knock Knock, and the opportunity to close down the Woogie Stage in the early hours of Saturday morning this is bound to be a compelling set.

If these artists have your head turning, be sure to check out the full lineup down below: 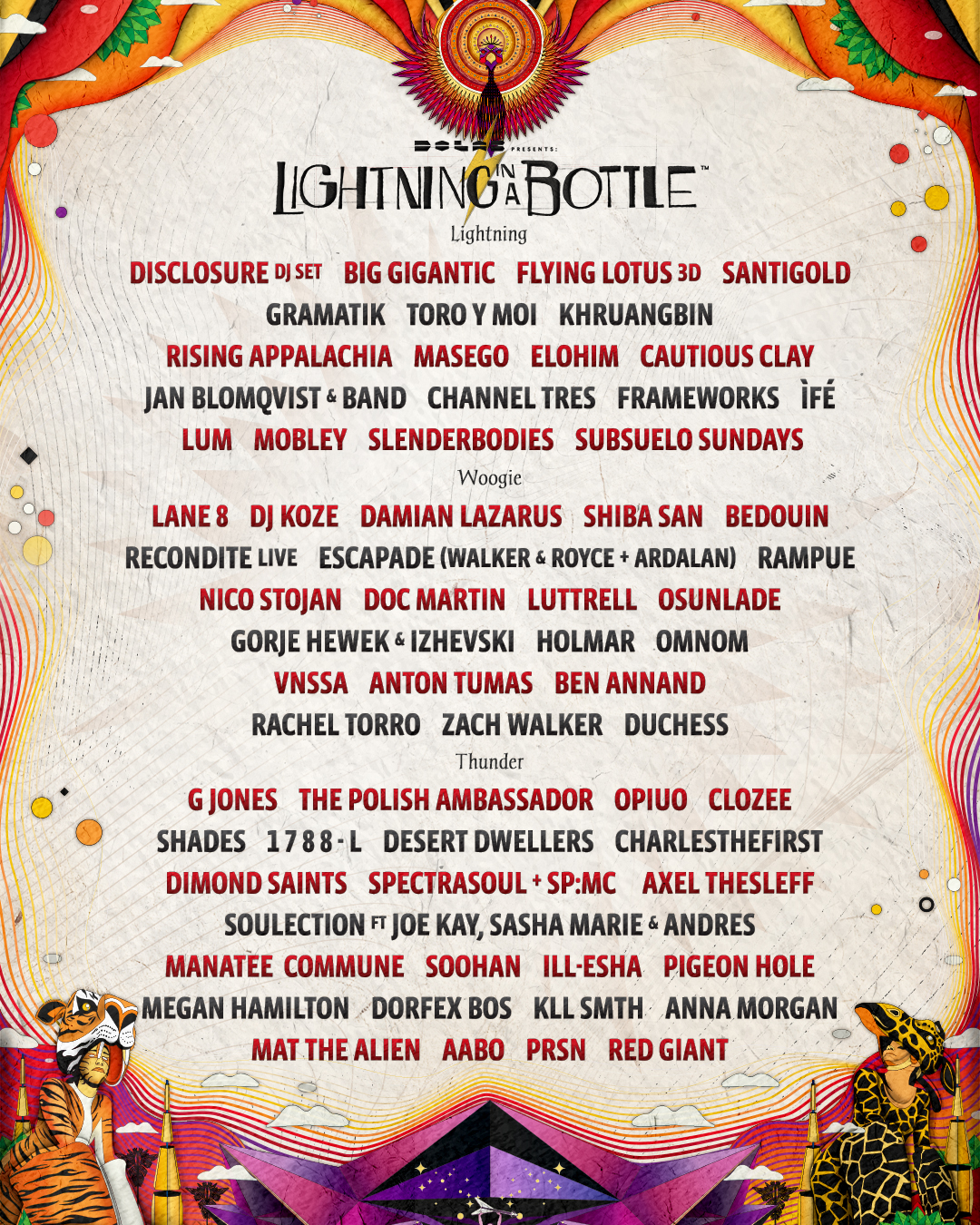