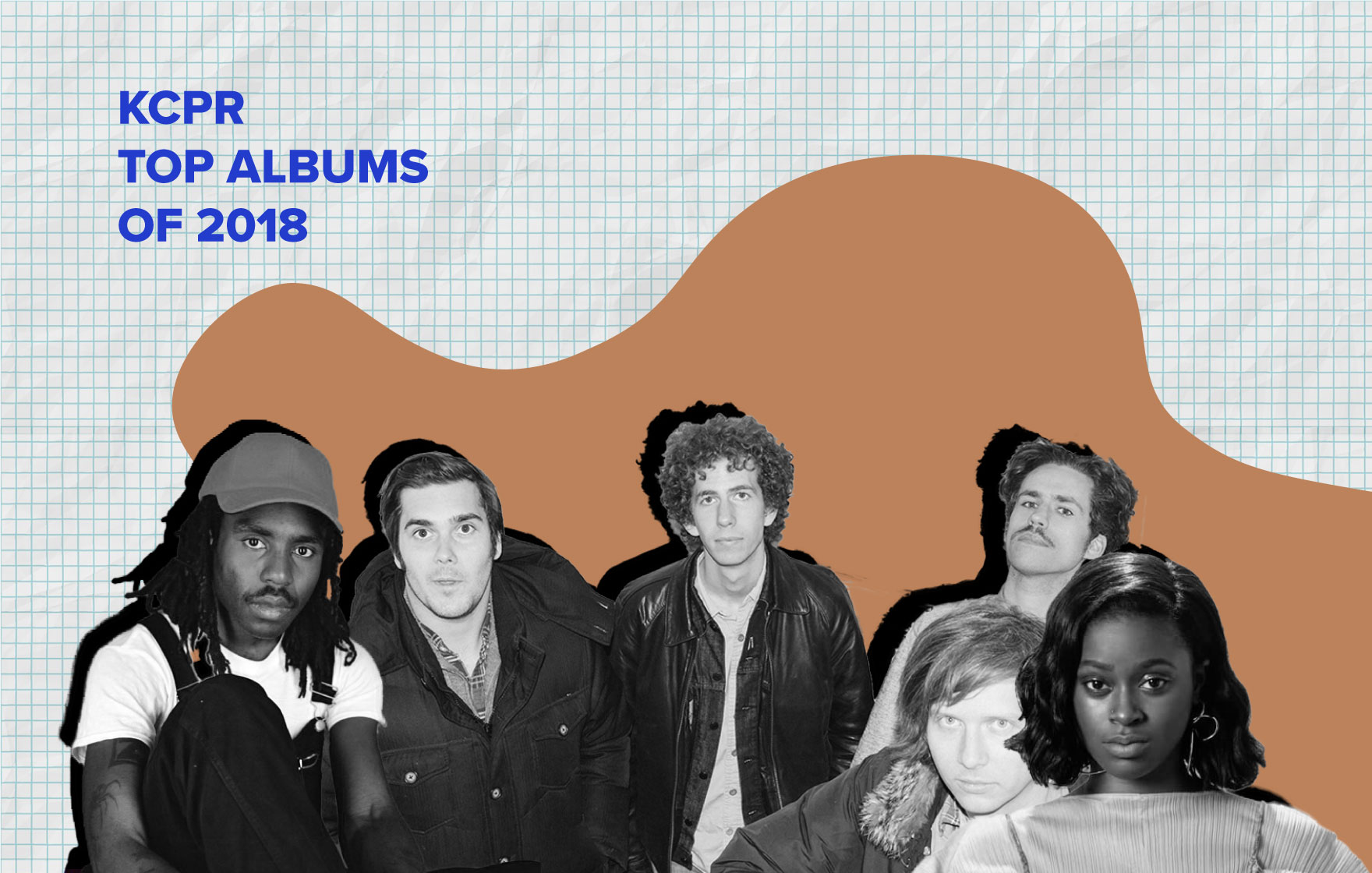 As the clock strikes twelve on 2018, it’s hard not to be sentimental for all that the year has brought.  Let’s take a look back at the albums that we’ve had on repeat all year long.

The beloved indie-rocker Mistki brought a heavy album this 2018. Tackling themes like romance and intimacy, Be the Cowboy shows off Mistki at her best. Candid, sincere, and unafraid, it should come as no surprise that her 2018 release has received critical acclaim.

24. Courtney Barnett — Tell Me How You Really Feel

On her introspective 2018 release, Tell Me How You Really Feel, Courtney Barnett gives us an up close and personal window into her personal life. The entire album maintains Barnett’s staple garage-rock sound, but behind the fuzzy guitar licks lays thought-provoking and intimate lyricism.

On his 2018 release, Scorpion, Drake reminds us why he has been on the top of the hip-hop/R&B game for nearly a decade. His versatility as an artist is eminent as he effortlessly transitions between hard-hitting 808-heavy trap and vulnerable R&B. The album also involves fewer featured artists than previous releases, allowing Drake to offer a more inward-facing view on his career, and in the process, assuring us that he’s not going away any time soon.

Highlight Tracks: God’s Plan, In My Feelings, Nice for What

In a response to the British political climate, IDLES dropped Joy as an Act of Resistance. Despite the differences in culture across the Atlantic, the power of music is a great translator. Heavy drums with hard and fast guitar riffs lead by gravely, screaming vocals are enough to turn the head of any punk fan. IDLES cuts the clever lyricism and fancy instrumentation on the album, and unabashedly jump straight to the point — just as punk rock should.

It seems like Anderson .Paak is gliding his way through fame; his unbeatable swagger and undying smile are just as infectious as his music. His 2018 release, Oxnard, brings legendary collaborations, from Snoop Dog to Kendrick Lamar to Dr. Dre — who was even features as the executive producer. .Paak has an undeniable knack for funk, R&B, and soul, and Oxnard is another release unafraid to pay homage to those roots.

Drenched in classic Good Morning melancholy, Prize // Reward is the first release from the Australian slack rockers since 2014’s Shawcross. The album feels stripped down and raw, complimented by their staple lo-fi sound. The album feels very relaxed and informal — a perfect embodiment of the “slack rock” genre.

Highlight Tracks: $10, After You, Escalator

Oakland-based artist Anthony Ferraro’s 2018 release, Living in Symbol, is just as spacey as his stage name. The album is co-produced with Chaz “Bear” Bundick — better known as Toro y Moi. Ferraro has toured with Toro y Moi as a keyboardist, but his multi-instrumentalist abilities shine on Living in Symbol. Smooth as can be, this album locks into a mellow groove that is sure to take you on an interplanetary adventure — at least, metaphorically speaking.

Highlight Tracks: Fly Over Me, Shut My Mouth, The Border

Mount Eerie released his 14th studio album, Now Only, reflecting on the death of his wife Geneviève Castrée a year and a half after her passing. Elverum’s stark lyricism invites you into his process of grief and growth without spinning it into a glorified poetic reflection. With only six tracks, the album intricately winds through his life with and without her, combining distorted power chords with delicate acoustic strumming.

The phrase “old soul” feels fitting to describe an artist like Kali Uchis. The 23-year-old Columbian-American has been compared to Amy Winehouse countless times, and it is easy to see why. Releasing Isolation this year, Uchis has cemented her place in modern R&B. The album is interlaced legendary collaborations from Damon Albarn of the Gorillaz to The Internet’s Steve Lacy, as well as Tyler, the Creator and Bootsy Collins on the banger that is “After the Storm.” Throughout it all, Uchis’ gripping vocals remain the highlight of the album.

Highlight Tracks: Dead To Me, In My Dreams, After the Storm

It’s hard to pick a favorite from Ty Segall in 2018; the man has been an absolute workhorse in psychedelic rock. Five albums released, and they’re all good. His cover album, Fudge Sandwich, though, brings Segall’s unmistakable angry fuzz to psychedelic classics of the 60s and 70s (of course, with a few exceptions). From Funkadelic and The Grateful Dead, to John Lennon and Neil Young, its hard not to crack a smile of recognition while headbanging to Ty Segall’s distortion-drenched guitar riffs.

After an unprecedentedly successful 2017, the boys are back with another slam dunk in hip-hop excellence. While their Saturation trilogy may rival Michael Jordan for “History’s Best Threepeat,” the hip-hop world is far from oversaturated with BROCKHAMPTON tunes. iridescence is a release just as strong as any other in their discography; filled with bombastic bangers and reflective slow songs, the album has it all. Listening to this album might be the most fun you have all year.

Whack World is one of the most creative albums of the year; with 15 tracks clocking in at exactly 15 minutes, Tierra Whack — literally — wastes no time on this release. The songs bounce around across the spectrum of hip-hop, held together by the visuals in the accompanying video. This album is best enjoyed as a whole, so spend some time visiting the Whack World — it won’t take too long.

Five years after their self-titled release, MGMT returned this year with an homage to 80’s synth pop with Little Dark Age. The group pushes their sound further than they ever have on Little Dark Age, and it pays off in dividends. The album incorporates synth into MGMT’s trademark psychedelic pop, creating a standout soundscape that made its mark on 2018.

Highlight Tracks: Me and Michael, When You Die, Hand it Over

Earl Sweatshirt skips the grandiose introductions on his 2018 release, as indicated by its cavalier title. Some Rap Songs is a portal into the mind of Earl; the tracks all hover around ninety seconds in length, and it feels almost like reading a diary — rough drafts, sketches, and raw emotion. Don’t let Earl’s nonchalant attitude drive you away, though. Earl Sweatshirt knows how to make bangers, and he didn’t hold back on Some Rap Songs.

Powerhouse R&B group The Internet brought the heat in 2018 with Hive Mind. The members of the group are all individually successful in music, but together, they are unstoppable. Hive Mind is funky, groovy, and most importantly, fun. The video for “Come Over” (as well as the entire album) flaunt the incredible group dynamic that makes The Internet an irresistible listen.

Connan Tant Hosford, better known as Connan Mockasin, is one of the weirdest dudes in the indie rock scene, and he isn’t afraid to show it. Jassbusters has Connan taking on his psychedelic sound from a more subdued place, and it’s as smooth as jazz. Or black coffee. Either way, it’s strangely seductive. The tracks warp, bend, and distort in a way only to be expected of the eccentric “Con Conn.”

Against All Logic is the electronic project of Nicholas Jaar, and his 2018 album is a collection of tracks that take on dance music with an experimental twist. The samples on this album really shine, throwing it back to funk and soul roots that have built the foundation for modern house music. Though the album was released with little fanfare, it is sure to get you on your feet.

Highlight Tracks: Now U Got Me Hooked, This Old House Is All I Have, Cityfade

The iconic Baltimore dream pop duo released another sensational LP with 2018’s 7. Departing from their usual bright timbre, this album is undoubtedly the groups eeriest work yet, complemented by the use of rough distortion and heavy drums. 7 is one of the boldest projects yet from Beach House, and definitely worth the listen — and all of the consecutive listens sure to follow.

This year, Car Seat Headrest released a fully produced version of Car Seat Headrest’s 2011 release, Twin Fantasy (Mirror to Mirror). Though Will Toledo is well-known for his extremely lo-fi sound from his Bandcamp years, Twin Fantasy (2018) shows that he has matured as a musician since then. Deep down, he’s still the edgy teenager with a knack for songwriting that we became so enamored with back in 2011. The only difference is that now, he knows how to masterfully craft and produce all of those diamonds-in-the-rough lurking on Bandcamp. Oh, yeah, and he’s 26 years old.

If you like sad music, Father John Misty’s 2018 release, God’s Favorite Customer is for you. The album is personal and raw as Tillman copes with the separation from his wife. As esoteric as ever, Tillman questions life, love, and the nature of our reality throughout the album. Despite it all, Father John Misty once again flaunts his knack for lyricism, with clever and poetic lines garnishing the album.

Jorja Smith’s 2018 release Lost & Found is her debut studio album, and she’s already made a resounding impact in the world of R&B. Confident yet graceful, Smith shows off her range throughout Lost & Found — both vocally and musically. Combining influences from lounge, trip-hop, jazz, and dancehall, Smith takes a resounding command over the genres of her predecessors and peers to create one coherent album.

The Texas-based trio Khruangbin know exactly what they’re doing when it comes to instrumental funk. Of course, it’s easy to detect traces of mid-century psychedelia, surf rock, and R&B in Con Todo El Mundo, but Khruangbin has really found niche of their own. Though lyrics — and sometimes even vocals — are sparse across the album, the bass and guitar are the driving voices that guide the listener through the transcendent 42 minutes of groove.

It’s hard to describe the kind of music that Unknown Mortal Orchestra creates. Ruban Nielson’s music can be described as soulful psychedelic rock, but even that label doesn’t capture the uniqueness that persists throughout their discography. Sex & Food is no different, but it captures a certain angst that was absent on 2015’s Mutli-Love. The album bounces between introspective and subdued to angry and raw, and it’s a spectacle to behold.

Highlight Tracks: Hunnybee, The Internet of Love (That Way), If You’re Going to Break Yourself

Dev Hynes, operating under the pseudonym Blood Orange, hit 2018 out of the park with his 4th studio album, Negro Swan. This might be his most complex work yet, with vivid synths, laid back guitar riffs, sentimental lyrics throughout. This album was clearly personal to Hynes, as he copes with being the self-proclaimed “Negro Swan” — his representation of the marginalized queer African American community.

The New York-based garage rockers returned in 2018, shattering new ground with Wide Awake! Andrew Savage’s essential gravely vocals make a return on the album’s punk-inclined moments, but Parquet Courts know when to hold back, bringing some of their prettiest arrangements yet. Whether you’re moshing to the political howling of A. Savage or drying your eyes to the heart touching “Tenderness,” Wide Awake! has something for everyone — hell, they even performed the titular track on Ellen. Parquet Courts’ 2018 release is a thought-provoking album that stays true to punk-rock roots without forgetting to have fun along the way.

Highlight Tracks: Almost Had to Start a Fight/In and Out of Patience, Wide Awake, Tenderness

Take a listen to KCPR’s highlights from 2018 in the playlist down below:

This list was compiled by KCPR staff DJs. The illustration was created by staff member Ally Millard. Other contributions from members Jakob McQuade, Josh Bilker, Connor Sullivan, and Drew Morrison.

Fiona Apple’s Fetch the Bolt Cutters – The Sounds of Quarantine