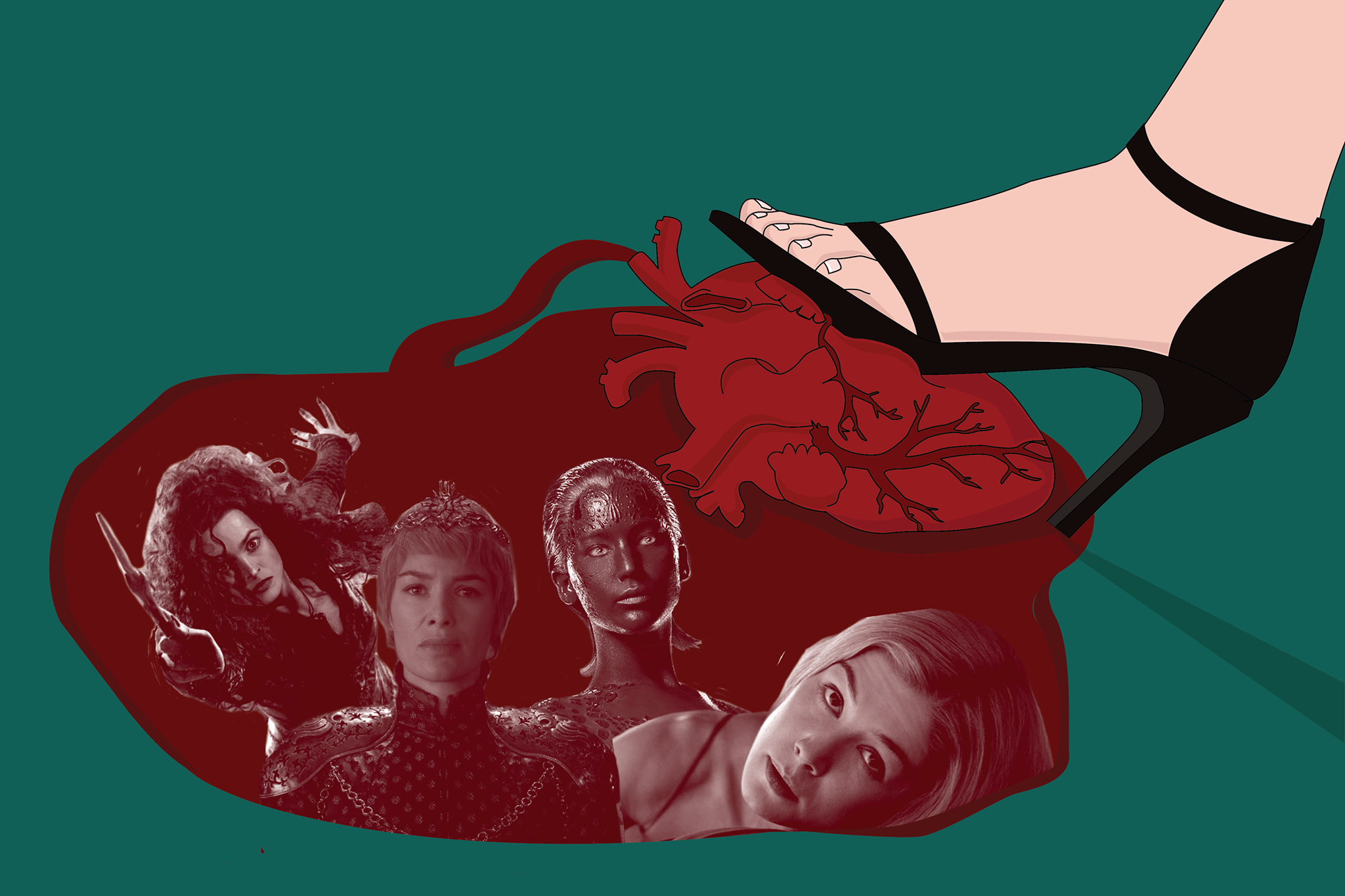 In 2014, the world became enamored with Amy Elliot Dunne: a gorgeous, brilliant, and all around shining example of the perfect All-American Girl.

The one caveat? Amy’s kind of a psychopath.

Actually, scratch that– she’s terrifying. Even an FBI agent referred to Amy as “one of the most disturbing female villains in… history.”

Based on the New York Times Bestseller by Gillian Flynn, the film “Gone Girl” tells the chilling story of the unraveling of the marriage between writers Amy and Nick Dunne. What started off as a fairy tale love affair quickly turns to horror when Amy, after discovering Nick’s infidelity, fakes her own death to frame her husband for murder and spark a nationwide crusade against him. She justifies her plans by proclaiming, “Nick Dunne took my pride and my dignity and my hope and my money. He took and took from me until I no longer existed. That’s murder.”

“Gone Girl” sparked a considerable amount of controversy when it hit the big screen, particularly among women. Some felt that a character like Amy — who not only frames her husband for murder, but also falsely accuses men of rape, writes a detailed and false account of her husband’s “abusive” behaviors, and ultimately traps him in the end by inseminating herself with his sample without his consent — was an insulting characterization of women. Amy has been accused of being a mere stereotype of the “crazy girl” trope and a sexist suggestion that this is how real women behave.

This past summer, another one of Flynn’s bestsellers — her debut novel, actually — hit the screens, this time as a miniseries on HBO. “Sharp Objects” tells the story of young journalist Camille Preaker, who returns to her hometown to investigate a series of murders of teenage girls. While home, Camille reunites with her narcissistic mother, Adora, and teenage half-sister, Amma.

Spoiler alert: Amy Dunne has nothing on Amma. The young teenager is every bit as harrowing and captivating — and the things she’s capable of are terrifying, to put it mildly. The mini-series has received praise for its exploration of female relationships, mental illness and family dysfunction. Still though, accusations of misogyny continue to follow Flynn’s work.

But Gillian Flynn had an interesting response to these claims: “If a male author writes a nasty male character he’s an anti-hero, but if a woman does it, it’s anti-feminist.”

In a world where audiences find themselves captivated by — and even rooting for — the villainous male protagonists on shows like “Breaking Bad” and “House of Cards,” why are we hesitant to explore equally dark and complex female characters?

There are, of course, some examples of female villains out there. Kathryn Merteuil of “Cruel Intentions” comes to mind. Mystique of the X-Men franchise. Even Disney has some, from Ursula to Maleficent. The trouble is, though, most of the time these women still have to possess some likable qualities: buried maternal instincts, the desire for true love, the insistence that they just want to fit in and be accepted. Rarely are female villains allowed to embrace their ruthlessness to the extent that their male counterparts are. “In truth, the women are seldom truly anti,” Mike Hale of The Star said. “The makers of television are still, for the most part (the occasional Claire Underwood or Cersei Lannister aside), unwilling to go all the way: to create a female character who freely [practices] evil and is, at least in dramatic terms, celebrated for it.”

There seems to be a widespread concern among writers that creating an “unlikable” female character is somehow a slap to the face of feminism. There’s a constant need to create “strong” female characters– women who act as role models, women who inspire little girls to grow up and save the world. “Women have spent so many years girl-powering ourselves to the point of almost parodic encouragement,” Flynn said, “[that] we’ve left no room to acknowledge our dark side.”

This intense need for female “likability” clearly exists in the real world too. During her 2016 presidential campaign, Democratic candidate Hillary Clinton was often accused of not being likable enough, often for conflicting reasons — because she seemed too cold and robotic, because she seemed too ambitious and enthusiastic, because she spoke up too much, because she didn’t speak up enough. “I’ve learned that I can’t be quite so passionate in my presentation,” Clinton said. “I love to wave my arms, but apparently that’s a little bit scary to people. And I can’t yell too much. It comes across as ‘too loud’ or ‘too shrill’ or ‘too this’ or ‘too that.’”

When it comes down to it, the world is arguably still very afraid of powerful women. Just because society might be warming up to Wonder Woman or an all-female version of “Ghostbusters” doesn’t mean our work is done. If audiences can only appreciate a “strong” female character when she’s playing the role of the heroine, the dutiful wife and mother, or the flawed, yet endearing character who “just wants to be loved,” that’s no good. As long as we’re afraid to write and portray women who are just as brutal, complex, and terrifying as Walter White and Frank Underwood, we are still confining ourselves to the patriarchal suggestion that women must be inherently good to be worth reading about.

As writer Lori Summer put it:

Kelly Martinez is a KCPR staff member and Cal Poly Journalism major. She conducted the interview and wrote the article. Ivy Kolb is a Cal Poly graphic communications senior and a KCPR DJ. She created the artwork.