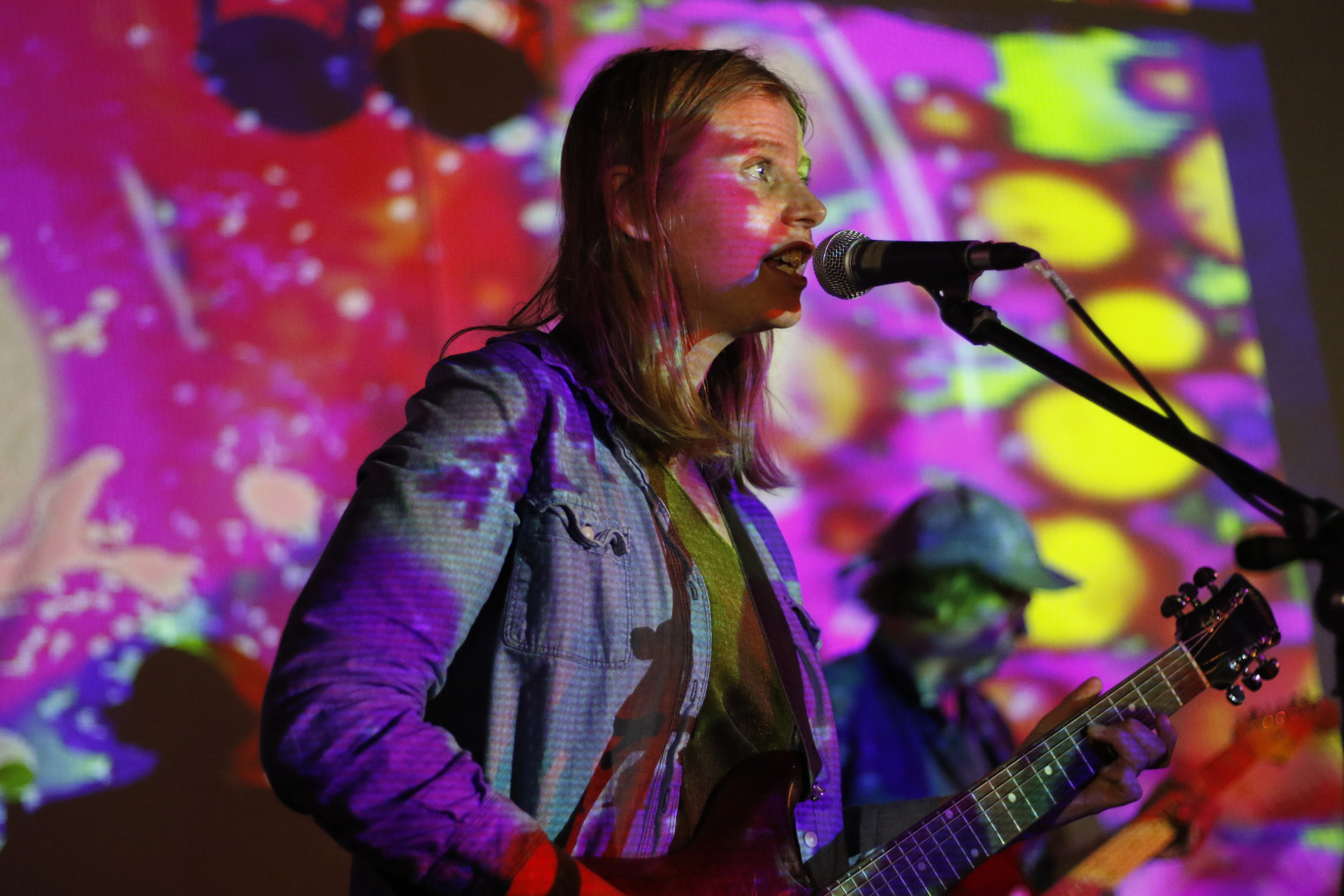 Hickey Fest: a small festival that felt like a different world, with recovered footage from a time I thought was lost in translation.

Last June, following finals week, I spontaneously decided that I was going to attend a music Festival called “Hickey Fest.”

The only thing I knew about it was that one of my favorite bands, Sugar Candy Mountain, was headlining and that it was taking place the weekend spring quarter got dismissed. Immediately after I finished my finals, I moved almost everything I owned out of my dorm, and — propelled by an unknown force — devoted my remaining energy to adventure to Leggett, California.

Leggett is a place that I had never heard of until I was on my way there.

At first, I thought it was near Santa Cruz, but to my dismay, it was actually about eight hours north of San Luis Obispo. My navigation directed me to a small restaurant called “The Peg House” off the side of the 101. As I found out, this little restaurant housed the music for the entire weekend. The campgrounds were directly across the highway in the Standish-Hickey Recreation Area, and the grounds were packed with festival-goers. The grounds were surrounded by redwoods, had a beautiful lake for swimming and cliff jumping, and the locally raised burgers being served just across the highway. I fell in love with the experience upon arrival. 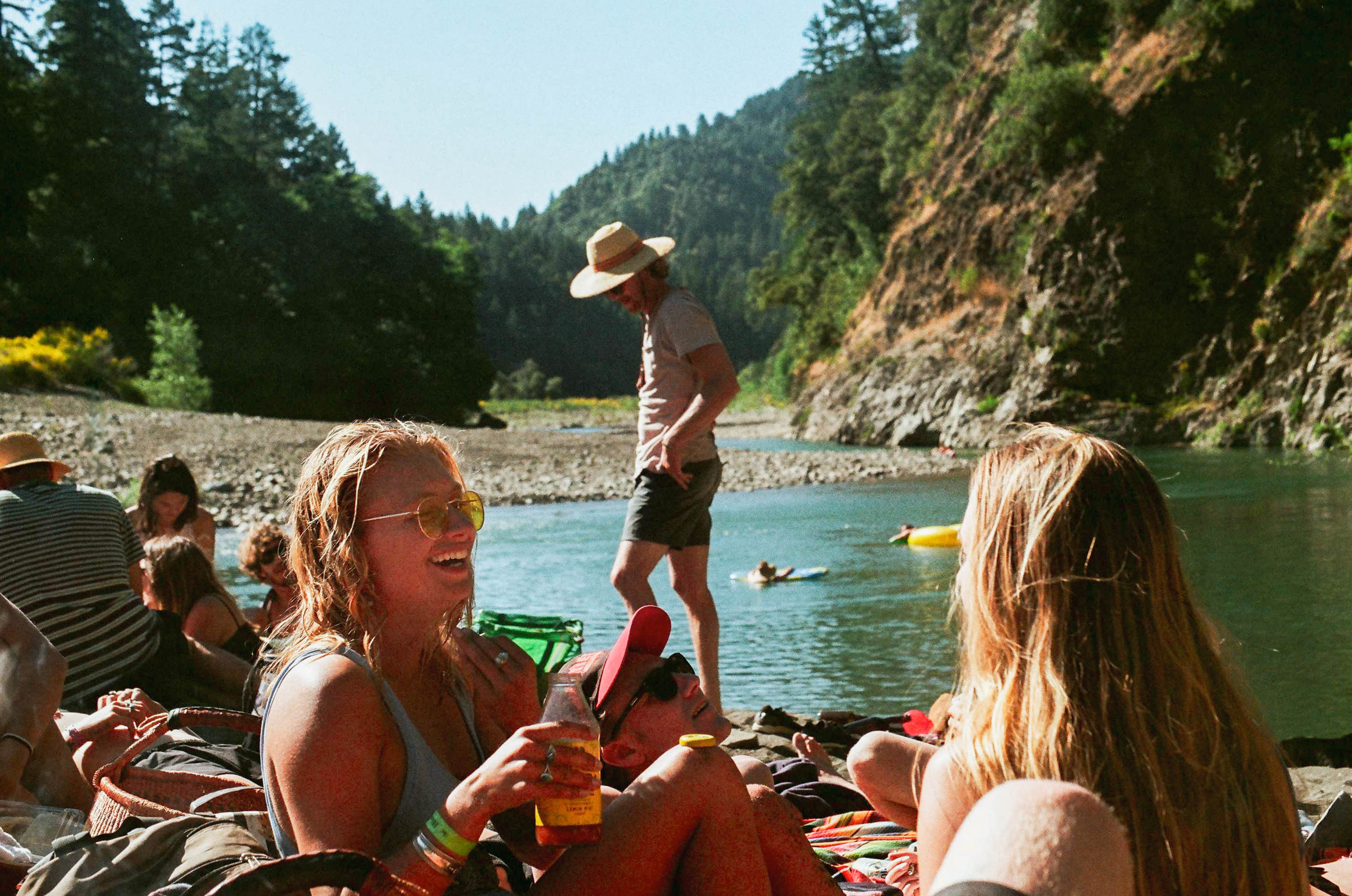 With a singular outdoor stage and around three hundred attendees, the festival was incredibly intimate — by the end of the weekend I felt like I pretty much knew everyone. Everyone would skate around the campground and make new friends, swim at the lake, explore the surrounding nature, just hang out, or, of course, listen to the magnificent musicians performing all day, every day. 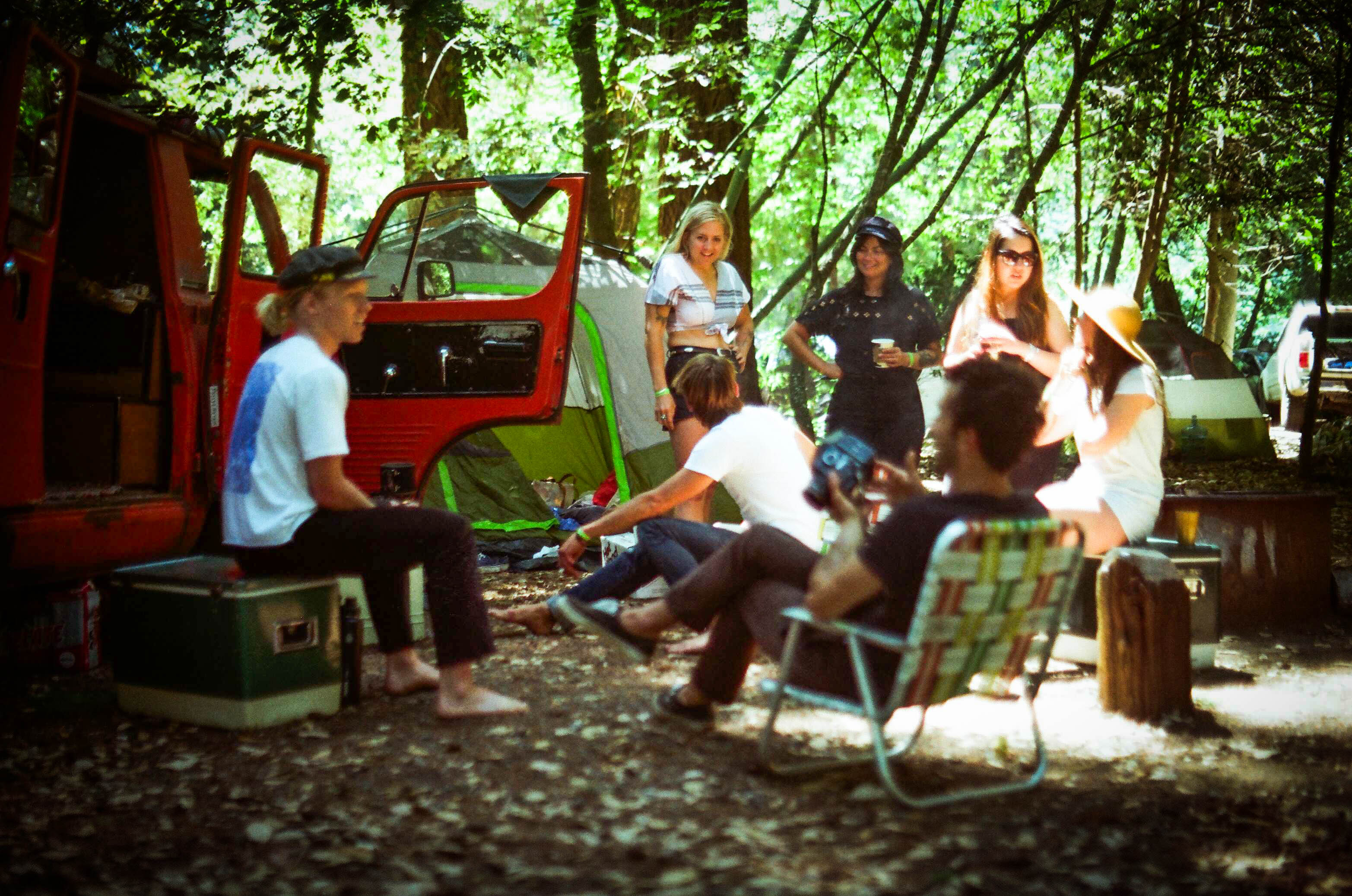 Every morning started with “showga,” held at the stage, where music would follow soon after. The performances were broadcast on a local radio station, so even when you were at the lake, the music never left. You could then decide whether or not you wanted to sprint across the highway from the campground in order to see who ever was playing. At night, everyone would come together to catch the headliners and eat dinner. 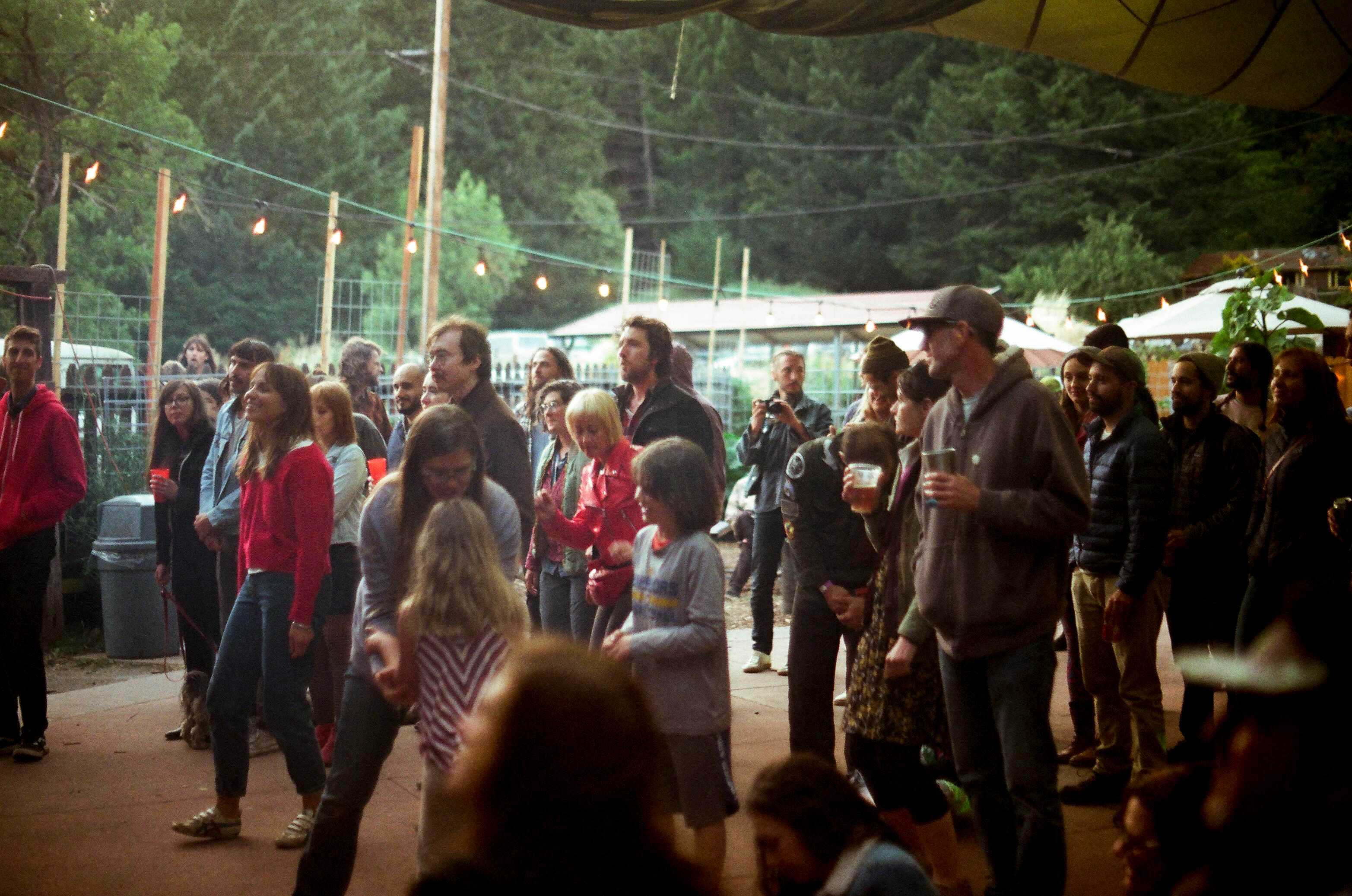 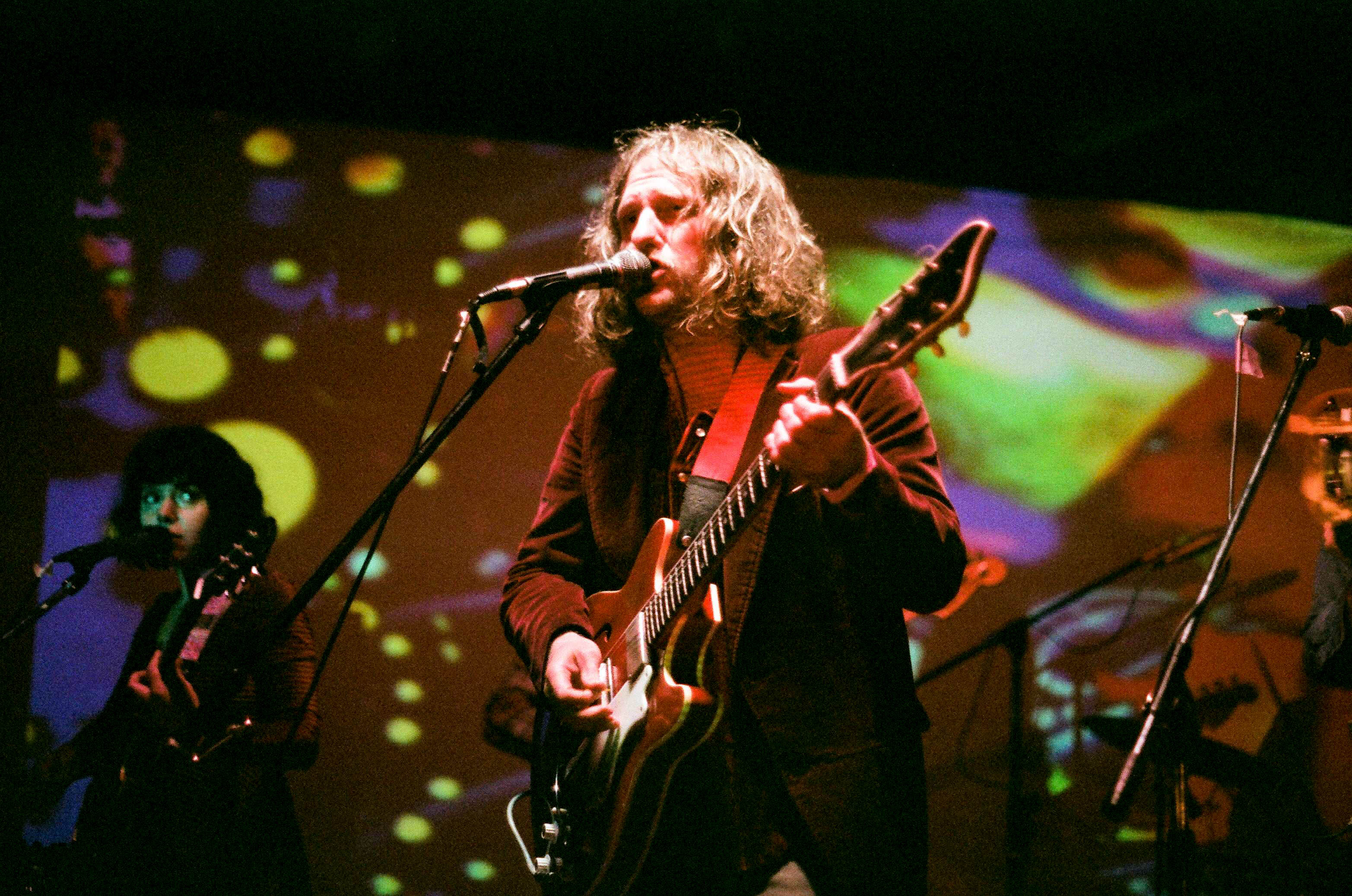 I was feeling elated for just making it out to Leggett, but I ended up putting a complete dent in my entire plan just three hours in to the weekend. Following my friends as we all skated around the campground, I was filming the experience on my Super 8 camera. Completely absorbed by the breathtaking shot I was getting, I was struck by reality when I flew off of my skateboard, scraping my elbows as I watched my camera hit the ground. I was devastated. I brushed myself off, picked up the exposed Super 8 cartridge, and took a few hours to salvage the camera to try to capture the moment as I intended: with film. My luck had run out, though. The camera was busted and I had to resort to my backup plan of digital photography.

After getting back from Hickey Fest, I made a highlight video from the salvaged film. I was so excited to share the footage I had with my friends and family, along with all the people I met at the festival.

Technology for some reason decided it had this evil grudge against me, and sadly my external hard drive, with all of my footage from this unforgettable weekend, had broken.

I had lost all of the footage from the festival and the main reason I wanted to go was to document the beautiful, untouched culture of this festival known only by few. I was beginning to think that there was a bigger reason I was unable to share this experience with the world.When I got the chance to talk to Ash Reiter of Sugar Candy Mountain, organizer of the festival for the past six years, she even touched on the belief:

It’s almost as though Hickey Fest wants to stay as quaint and authentic as it is now.

Jo Anna Edmison: Why did you start Hickey Fest in the first place? What was the main idea behind starting the festival?

Ash Reiter: I found the location doing a bike tour from Portland. I thought it was a special thing to get everyone together and have time together to spend in nature. I wanted to recreate that and invite other people.

J: How did you find out about The Peg House? is Hickey Fest the main event they host there?

A: They have other events, like a reggae one, too. I asked them if they would be interested in having a festival a few years ago and then we came up with something.

J: What is your favorite part about the entire event?

A: It’s really exciting to get to bring new acts each year and expand that circle in that way. This year, Cry Boys was a new act for almost all of us and I was really excited about their set and excited for people to see them. The band South Priest had been attending the festival for a while, and this year they were finally able to play.

J: How does Hickey Fest compare to other festivals?

A: We want to stay intimate. I like what we have, I don’t imagine it could get too much bigger. There isn’t enough room to go that much bigger. You have to have the right location to have a bigger festival, and I like Hickey Fest the way it is.

J: Has Sugar Candy Mountain always played during the fest? How do you find other bands to play the fest?

A: I am friends with almost everyone who plays and it has mainly stayed that way. I didn’t know Mattson 2 and Shy Boys but I was introduced to them through mutual friends. They were good friends too. Sugar Candy Mountain has played every year. The very first year we played it was both Ash Reiter and Sugar Candy Mountain, I’m pretty sure.

J: Is showga a new addition to the event?

A: Showga we have had for the majority of the years. Same with Mad Alchemy. Last year, we added Donutime audio. They run a studio in Oakland ,so it is a cool way for them to capture the bands and the entire place that is surrounded by the campgrounds and the trees. In honors of our label, we do cutting odd shaped records. He will do records that are on picnic tables and three records put together. He was actually cutting records straight there. That was a new addition this year as well. It was a special acoustic performance. We worked also with a group called Ethics to be more sustainable and have less of an impact on this place.

J: Do you think the festival is going to grow over time or do you plan to keep it small?

A: I don’t really like festivals, so I wanted to create that kind of thing, but I wanted it to stand apart from other things as well.

Despite the setbacks, I remained determined to recover what I had captured. Last month, I was able to repair my external hard drive. I then decided to send in the Super 8 cartridge to be developed in hopes that the crash did not overexpose the film. I got my footage back only a few days ago, and to my surprise, the film I shot was completely intact — I still cannot believe it. When watching the video, you can even see the moment that I fell off of my skateboard and break my camera, indicated by a huge light leak.

I decided to put the video together (before something else breaks). These are experiences from a weekend that made me feel like I was in a different world. Hickey Fest was an experience that I will hold closely to me for years and years to come, and a tradition I will carry on for as many years as I can.

Jo Anna Edmison is a Cal Poly sophomore and a KCPR DJ, on air from 6 to 8 p.m. on Monday nights. She wrote the article, took the photos, and conducted the interview.