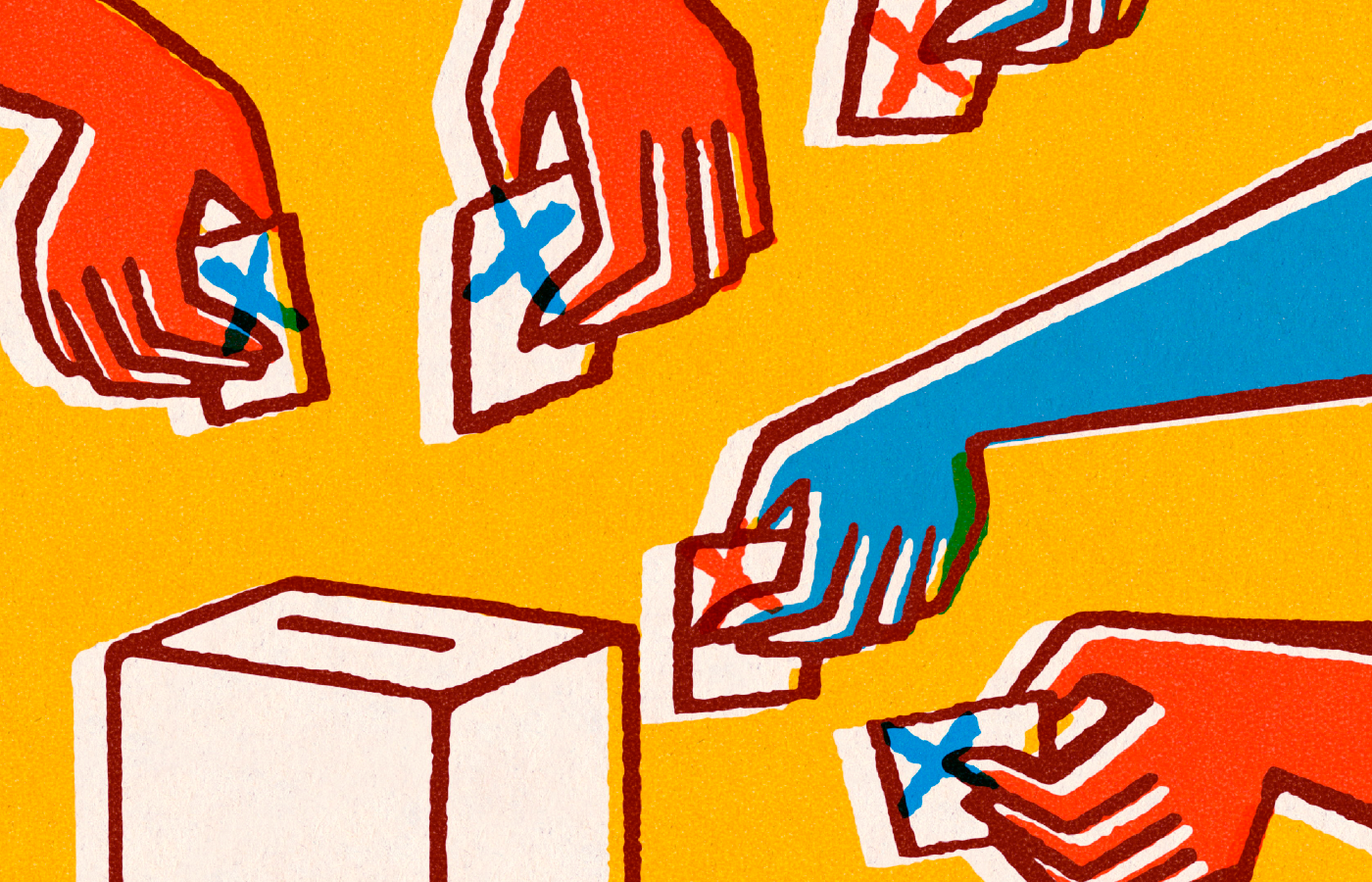 Despite that, less than 20 percent of young people voted in the 2014 midterm elections.

A recent Harvard poll found that young people are more likeley to influence the elections than usual, with 40 percent of 18- to 29-year-olds saying they were likely to vote Nov. 6. However, this demographic has fallen short of projections in the past as the 2014 predictions were more than six points higher.

Starting in December, San Luis Obispo will have a new mayor and two city council seats up for grabs. California will have a new governor and senator. Gas could be 12 cents cheaper and you may never have to change your clocks again. San Luis Obispo Mayor Heidi Harmon was elected by just 47 votes in 2016 — largely due to student voters. Could you be the swing vote this year?

Here’s your guide to get your voice heard in the 2018 Midterm elections.

Help! How do I find my polling place?

Go here! Type in your address and voilà.

Polling places are open from 7 a.m. to 8 p.m. Tuesday. As long as you’re standing in line at your polling place at 8 p.m., you will be allowed to vote.

Oops, I forgot to register.

It’s not too late to register to vote or update you address to vote in San Luis Obispo, even if you missed the Oct. 22 deadline.

Head downtown to the Clerk-Recorder’s Office at 1055 Monterey St. to fill out a conditional voter registration ballot. As long as you are eligible to vote and did not vote somewhere else in California, your ballot will be counted towards the Nov. 6 election results, according to San Luis Obispo Country Clerk-Recorder Tommy Gong.

What if I get in the voting booth and I don’t know anyone on the ballot?

Luckily, voting is not a closed-book test. So if you’re not quite sure what something means, take our your phone and do some Googling.

Uh-oh, I’m supposed to vote-by-mail and haven’t sent my ballot yet.

Not to fret, all postal ballots will be counted as long as they are postmarked on or before Nov. 6. Additionally, you can bring your ballot into any polling place from 7 a.m. to 8 p.m. on Election Day.

I have work on Election Day.

In California, employers are required to allow employees up to two hours to vote on Election Day without a loss of pay.

Here’s our crash course version of our coverage of the candidates and issues that matter most to students.

The City Council is made up of the mayor along with four other elected council members.

The mayor of San Luis Obispo serves in two-year terms and leads City Council meetings. The mayor is recognized as the official head of the city for all ceremonial purposes, according to the City Charter, but possess no additional power over other city council members. Known for her signature rose and strong presence on campus, Heidi Harmon emphasizes focusing on the future and has called herself the only true “progressive” in the race.

Since being elected in 2016, Harmon has helped repeal the controversial rental hosing inspection program, widely seen as a burden to landlords and an invasion of privacy to tenants.

Although Harmon is pushing down payment assistance and other similar programs currently in place to increase affordability, she is still brainstorming future strategies, such as helping Cal Poly house more students on campus.

Harmon’s passion for fighting climate change can be seen in her only mode of transportation — an electric red bike. She has been completely car-free for three months.

Harmon said she is particularly proud of her response to students who felt unsafe walking on campus at night. She helped triple the city’s budget for lighting around campus and had public works trim trees that were blocking existing lighting. T. Keith Gurnee was first elected as a San Luis Obispo councilman in 1971 at the age of 23, while he was still a student at Cal Poly, and served on the council for seven years. Gurnee worked as a city planner in San Luis Obispo County for approximately 40 years and is now retired.

Gurnee was inspired to run for council over a bike lane through his neighborhood, which he said the current council did not listen to the neighborhood’s concerns over.

He said he is focusing on building a campaign around preserving the original character of the city.

Gurnee wants to fix the lack of affordability in San Luis Obispo and plans to sponsor a competition with Cal Poly to design a new village on campus for students to live. He said he hopes Cal Poly can begin to accommodate up to 75 percent of its students on campus, instead of the current 30 percent.

If elected, he hopes to return the council’s goals to open space restoration and protection as well as neighborhood wellness, which he said have been forgotten during the last two years.

Gurnee wants to work closely with Cal Poly and hopes students will join the city’s commissions to get involved with local politics.

Carlyn Christianson is the only candidate running with prior experience on the council; she has been a member for the past five years and is running for re-election.

Along with serving on city council, Christianson is an administrative assistant at Transitions Mental Health Association and has a long career as a healthcare administrator for both non-profit and for-profit organizations.

“I’ve delivered on my promises: integrity, transparency and a no-nonsense attitude coupled with an informed and thoughtful approach. I remain a friend to Cal Poly, supporting many positive efforts over the years to address issues such as housing, transportation, public safety, climate action, water, environment, open space, and improving relations with neighbors and community,” Christianson wrote.

Sarah Flickinger grew up in Los Osos and is a 2002 Cal Poly journalism alumna.

After a career in communications, Flickinger is a homemaker who believes she can provide a “grounded, practical voice in our city’s leadership.”

“Data-driven climate action planning, goals and programs are extremely important to me, especially in terms of social and environmental justice, for a healthier future community,” Flickinger wrote. “As the mother of a young child and an environmentalist, I feel strongly that we must take swift, real action at a much deeper level than our community ever has done before.”

Abe Lincoln first arrived in San Luis Obispo in 1988 as a Cal Poly freshman and returned to the area in 2016, 24 years after graduating. He is the executive director of the SLO Noor Foundation, a local non-profit which aims to provide free healthcare to the uninsured residents of the county.

“I believe we as a city need to focus more heavily on our residents. With that, I believe we need to focus on healthcare for all and the elimination of homelessness, especially among students,” Lincoln wrote. “I believe we can make significant strides in preventing all sexual violence in our city and I would also like to put a concerted effort into making San Luis Obispo one of the most inclusive and eventually diverse cities on the Central Coast.”

James Lopes is a Cal Poly alumnus and retired city planner. Lopes first moved to San Luis Obispo on New Year’s Day in 1976 and said he feels connected to the city for its “unique location and collegiate nature.”

Erica A. Stewart first arrived in San Luis Obispo as a Cal Poly freshman in 1990 and has been a resident for more than 20 years. While at Cal Poly, she served as Associated Students, Inc. (ASI) president for the 1994-1995 academic year. Stewart currently serves as a Civil Services Commissioner for the county. She is involved in multiple non-profits in the county, including the Downtown Association and League of Women Voters.

“I daily get the opportunity to work with students and advocate for the programs and services that they need,” Stewart wrote. “ Cal Poly would not be the great institution it is if it weren’t for our amazing and engaged students. Cal Poly is San Luis Obispo and San Luis Obispo is Cal Poly — you cannot have one without the other. My goal is to increase the connectivity and integration of the two into one cohesive community.”

Bob Voglin has lived in San Luis Obispo since 1991 and raised his two sons here with his wife. Voglin is a retired salesman and the founder and director of the non-profit Surfing for Hope Foundation. As a passionate surfer and cancer survivor, Voglin created this non-profit to bring the medical and surfing world together to help those affected by cancer.

“Over the past decade, San Luis Obispo has changed and is losing it’s quaintness and charm,” Voglin wrote. “We need to re-evaluate the direction San Luis Obispo is growing. I appreciate and understand that the community needs more head-of-household jobs. However, sacrificing the lifestyle that attracts tourists and the reason our residents came here in the first place is the wrong approach.”

Jeff Specht is a lifelong resident of San Luis Obispo. He ran for mayor in 2014 and is an advocate for the homeless and veterans.

“I encourage our local students to speak about their concerns at our local city council meetings and I will be there to address their concerns in a positive manner,” Specht wrote. “If elected I will serve the will of the people:  students, homeless, veterans and elderly.”

Find out more about the City Council candidates. In the November election, California voters will decide on 11 propositions. Here’s everything you need to know about them.

This article is a cross-post from Mustang News and was written by Mustang News staff member Austin Linthincum with contributions from Ashley Ladin and Quinn Fish.

Cherry Glazerr, Wavves and Best Coast Face Off at the Fillmore