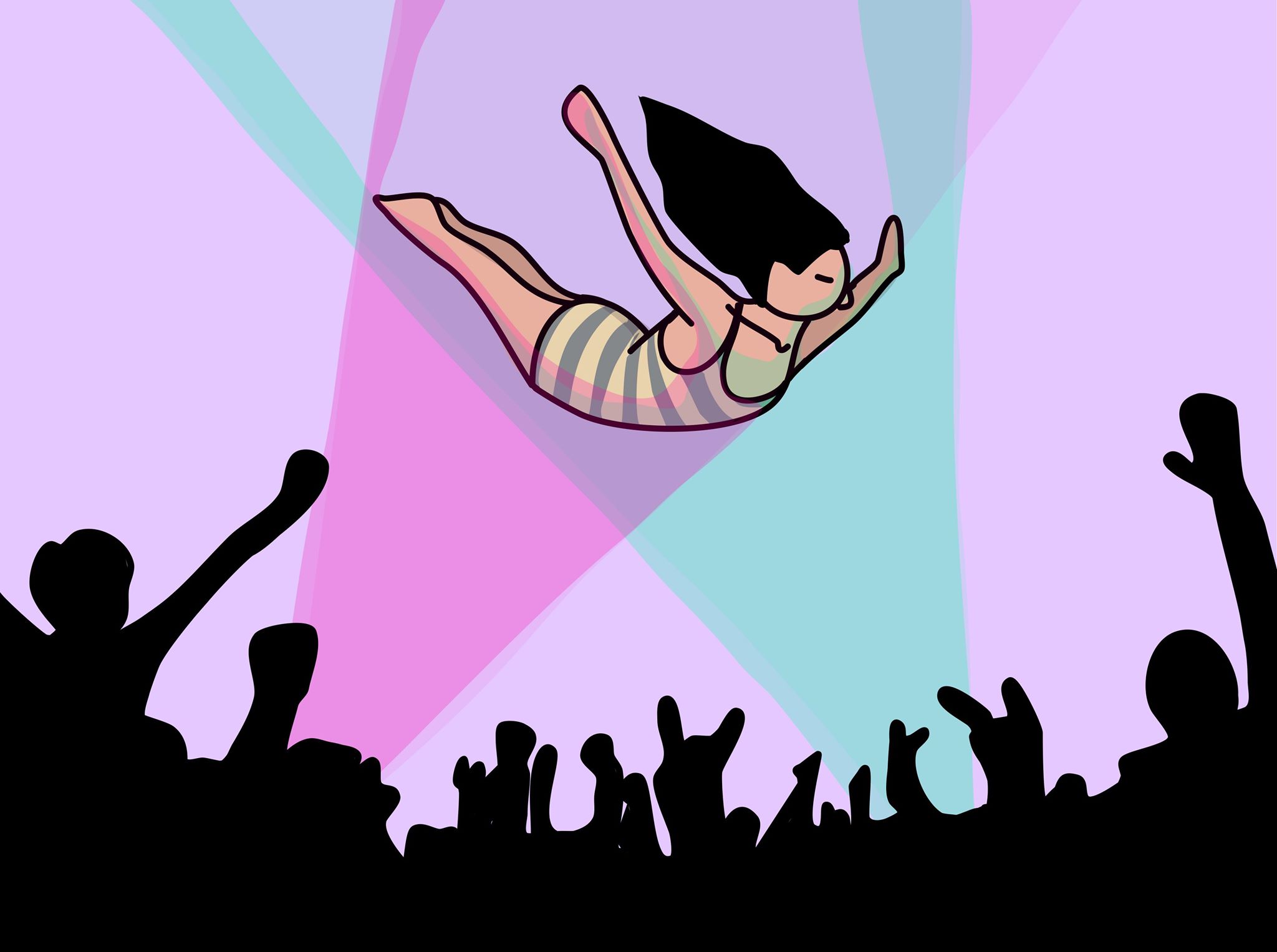 August 8th, 1964: the Rolling Stones stand atop a stage and play to a crowd of frenzied fans at the Kurhaus in Scheveningen, Holland.

During “Suzy Q”, the crowd begins to get rowdy and a fan yanks the cord from Mick Jagger’s mic.

In reaction, the policemen lining the stage attempt to control the crowd, instigating a riot. People begin screaming, throwing bottles, and destroying the venue. Those who charged the stage are promptly kicked or tossed off of it. Then, the lunatics begin to thrust themselves offstage into the safety of the crowd. And they do so again, and again, and again…

Three years later, Jim Morrison of The Doors begins to jump (or flop, depending on what drugs he ingested) off the stage into the crowd during the trances he often delved into during concerts. Sometimes, his devout fans caught him. Other times, he fell to the ground and writhed for several minutes before getting up.

It is not until June 13th, 1970 that Iggy Pop launched himself onto his fans at the Cincinnati Pop Festival. This soon became a regular occurrence for Iggy, who in doing so popularized the barbaric activity and set the precedent for all punk, rock, and hardcore shows to come. Eventually, the crowd began to notice a trend and started to actually catch him, thus popularizing and perfecting the crowd surf.

Stage diving became an activity that both the band and the fans could partake in collectively. An unwritten code of conduct was developed and agreed upon by the scene which held fans accountable for stage diving productively. If you have the opportunity to jump onstage, don’t be a dick and interrupt the set. The move was also known as the pogo — bounce on stage and bounce off.

As someone who was born well after these pioneers, I always thought stage diving was an intrinsic aspect of punk music.

It is hard to imagine a time when such a universally accepted and expected activity was heinous. If it were not for a series of riots and rule-breakers, the convention may have never caught on. Who knew that simply flinging oneself onto a group of sweaty humans was so damn fun?

During an interview with Barbara Walters, Courtney Love said,

“I think that’s what the stage diving was about. Like, alright, kill me. Crucify me. Get me, come on. Tear my breasts off. Take off my underwear. Little shreds. Go on, do it. Take out my hair. Break my arms, break my teeth.”

Stage diving and crowd surfing permanently changed live performances. What began historically as “punk” is now a convention at all types of concerts. Some love it because it connects the audience to the musicians and allows more collateral participation in the music.  A core tenet of punk music is that the band and the crowd they play to are equals; this is reflected directly in pogoing because the stage does not serve as a barrier between who is performing and who is attending.

However, this heightened connection (literally, bodies connecting) is not a sensation desired by all.

It can be dangerous if the person on the receiving end of the stage dive is not attentive. Even then, there are factors such as the nature of the dive, the size of the diver, and the surrounding crowd that affect the delivery of a (relatively) harmless pogo. Just like any form of extremism, it has its dangers.

Many a time have I seen people get absolutely annihilated by a diver who happens to stick their jackknife jump directly on someone’s neck. I have also seen people leave crowds bloody and sometimes unconscious, scary but not entirely unexpected consequences of a widely-accepted practice. For those who are dearly concerned about stage divers, typically the perimeters of the crowd are a safer place to reside; nothing can be guaranteed, though. Most concerts have manifested into contained and compartmentalized chaos.

Some musicians, however, have discouraged irresponsible stage diving at their shows. Post-hardcore band Fugazi was among the first bands to discourage stage diving and other forms of crowd aggression (which, when considering their 1996 album Stage Dive Masters, is ironic).

They would actually keep a stack of cash atop of the amps and frontman Ian Mackaye would personally escort troublemakers out of the venue with a $5 refund. This type of proactive behavior earned them death threats and hate mail. It’s interesting that a man like Ian Mackaye — who was so heavily involved in making punk what it is today — received backlash for simply trying to minimize harm.

Later down the road in 2014, Joyce Manor frontman Barry Johnson called out a man (a  rather large one) for diving directly on top of a group of teenage girls, and was berated on all forms of social media.

He tweeted, “So far on this tour I’ve seen a girl with a black eye, a girl with a concussion, and a girl with a dislocated knee.. .” and later added “I love a crazy show as much as anyone else I just don’t think anyone should have to go to the hospital because of some idiot with a tank top & Moz hair” (Moz is in reference to Steven Patrick Morrissey, lead singer of British balladeer band The Smiths, whose historical mop took the shape of a jet black quasi-mohawk/quiff. In this context, we can assume Johnson is alluding to the doucheyness typically associated with the likes of such faddish swank).

As a rather delicate yet maniacal punk fan myself, I appreciate those who try to keep the floor a safe place. At every show, there are dozens of helpful individuals who look out for each other to avoid any catastrophe.

Yet, for many, a hospital room is the afterparty.

Charles Haddon, frontman of British pop band Ou Est Le Swimming Pool, killed himself after fearing he had permanently injured a young girl onto whom he stage dove. She was carried off on a stretcher and suffered injuries to one of her legs and four dorsal vertebrates, but ultimately recovered.

One of the first concerts I attended was The Wonder Years at a bar in Philadelphia when I was 14. The crowd was calm and spread out until the second the band came onstage; then, it was hellfire. My body was being thrown and lurched in every direction. I lost a shoe and I thought my toes had been crushed beyond rectification. Then, out of nowhere, I see a body in the air on top of me, and a guardian angel who took the form of a beefy man with body mods caught the diver right before he landed on my head. I thought it was absurd. And beautiful.

A couple years later, I began taking the leap at some shows. It’s mildly exhilarating and wildly uncomfortable. I would definitely recommend giving it a go.

Some argue its up to the individual to be vigilant and aware of their surroundings if being on the receiving end of a diver concerns them. Others say that concertgoers, especially within the punk genre, should treat the venue as a community space and act respectful to those who clearly prefer to not get kicked in the face by a worn-down canvas sneaker. Some people wonder how a logical argument to defend the act of aggressively thrusting your entire body onto strangers whilst spitting and screaming song lyrics in their ears even exists.

However, I will say, no matter how barbaric, chaotic, or rude it may be when analyzed with any ounce of logic — a lack of energy is evident at shows sans stage diving.

Here’s the bottom line: you can stage dive to your heart’s desire and still not hurt people in the process. Just because it is a widely accepted aspect of concert culture does not mean that every individual is ready to catch your squirming, sweaty body on their craniums. There is a way to tactfully wreak havoc so that everyone may feel safe within the mayhem.

I thank you Iggy, Jim, and the brave souls of Scheveningen for your service to the stoke.

Olivia Peluso is a KCPR content contributor and a Cal Poly English junior. She wrote the article. Ella Worley is a KCPR staff member and Cal Poly viticulture senior. She drew the graphic.

The evolution of personal music taste in quarantine

An Interview with Dead Meadow