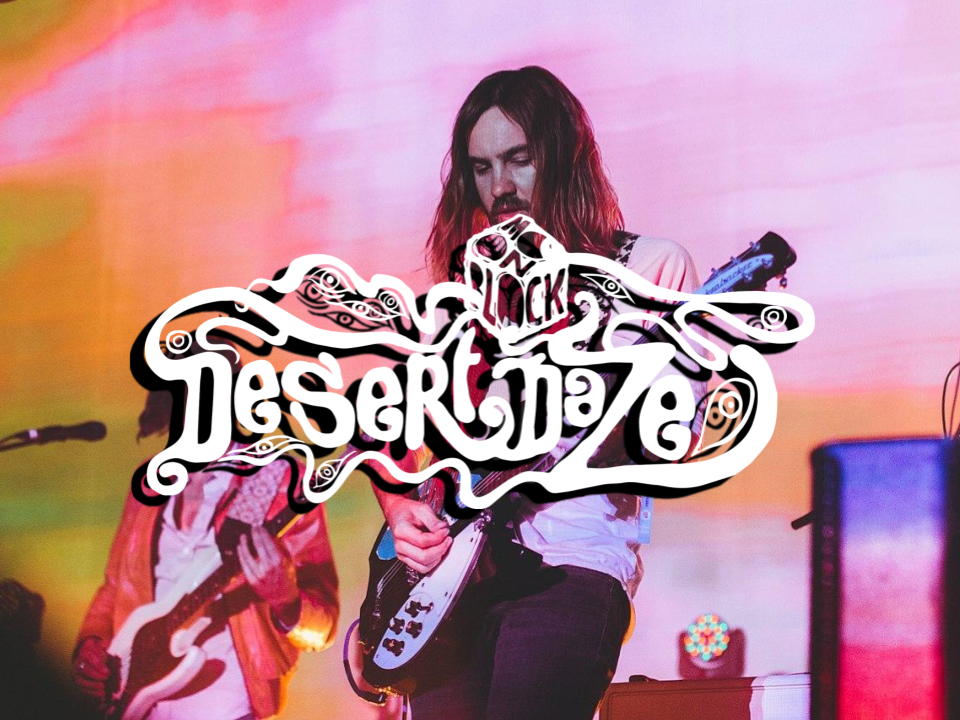 As the clock approached 10 p.m. last Friday, music fans eagerly surrounded the towering stage on the edge of Lake Perris.

With looming clouds overhead, the gentle mist quickly turned into a threatening downpour as lightning began to illuminate the rock-studded hills encompassing the venue.

Tame Impala were planned to headline day one of this year’s Desert Daze, but at five past the hour, they remained absent from the main stage. The beachfront continued to fill with fans awaiting the bands entrance, but the relentless rain and frequent lightning strikes had everyone guessing whether they would perform.

A few minutes later, the stage lights went dim as the band members found their place next to their instruments. The crowd lit up as did the sky — lightning struck directly over the lake as Tame Impala’s “Nangs” instantly won over the nervous crowd.

For a brief moment, suspended in time, it was a transcendental experience.

Tame Impala blew away the expectations of the crowd, and the surreal venue of Lake Perris, combined with the thunderstorm, truly felt like an alien landscape.

The band continued with an epic performance of “Let it Happen” and continued into “Sundown Syndrome,” only to be escorted off the stage by event staff.

“We gotta go,” Kevin Parker briefly stated into the live microphone. “We love you guys, but we gotta go.”

Festival attendees were urgently informed that the thunderstorm was a threat to their safety, and to walk — not run — to the nearest shelter. Hundreds of attendees were there as campers for the weekend, and they were forced to make friends with strangers to find refuge in RV’s and (in desperate cases) in on-site bathrooms — pretty much anything but a tent.

Though Tame Impala was promised to return following the inclement weather, there were no signs of the rain and thunder stopping. Social media exploded with backlash from festival-goers. Despite the negativity in the air, the Desert Daze festival continued into the rest of the weekend with clear skies in the forecast.

If you left because of the lightning storm, you missed out.

The performances that continued through the weekend were sure to win over any cynical festival-goer. Psychedelic tunes permeated through the air and into the nearby campsites; even if you weren’t at the main stage, it would be hard to miss performances if you tried.

Highlights from Saturday’s afternoon lineup included Cut Worms, Hand Habits, and Kevin Morby. Each of these bands delivered bright, jangly tunes that had the crowd moving at the strum of the first chord.

Speaking of guitar — Meg Duffy (of both Hand Habits and Kevin Morby) was sure to draw eyes and ears, shredding on her sunburst Stratocaster.

The dynamic between Kevin Morby and Meg was incredible to watch. Their set included perfectly timed dual guitar riffs on their opener, “City Music,” and even a moment in which Duffy climbed on Morby’s back to play a solo on his Jazzmaster.

Of course, the psych-rock jam sessions with Mercury Rev, JJUUJJUU, and Kikagaku Moyo were not to be missed, either. Perfectly complemented by the otherworldly backdrop of the lake, it was easy to get lost in their performances in a trance-like state.

The early headliner, Slowdive, packed a punch with their heavy, droning shoegaze sounds. A legend of the era, their set brought the genre-defining “wall of sound” effect that is just as powerful nearly 30 years later. “When the Sun Hits” was my personal favorite from their set, inducing the nostalgic, melancholy feeling that few bands can replicate.

King Gizzard and the Lizard Wizard was a huge draw for many attendees, known for their die-hard fans and deep lore, including a parallel universe called the “Gizzverse.”

Their set was action-packed, sure to keep anyone who made it to their midnight set time awake and dancing. Just in front of me, there was a man in nothing but leather underwear and matching chest straps, thrusting and head-pounding throughout their 90-minute set. To that man, I salute you (and your endurance).

Performances continued through the night and into the morning. When I was able to make it out from my tent around the break of dawn, the hazy sunrise was accompanied by The Mattson 2 playing their signature surf-rock-infused jazz hits. The band even threw in a fitting cover of The Velvet Underground “Sunday Morning,” of course, with an improvisational twist.

Though Desert Daze had its share of unconventional issues, that was only to be expected of an independent festival switching to a brand new venue. In my opinion, the phantasmagorical landscape of Lake Perris littered with the surrealist art installations and the bizarre attire of the attendees makes for a completely unique experience that makes the slow start worth it.

With the lightning storms in combination with the incredible lineup, I can definitely say that this year’s Desert Daze was — literally — unforgettable.

Jakob McQuade is KCPR’s Editor-in-Chief, a Cal Poly journalism junior, and spins records as MC Quade from 12 p.m. to 2 p.m. on Sundays. He wrote the article and created the graphic. Logo credit to MOON BLOCK.