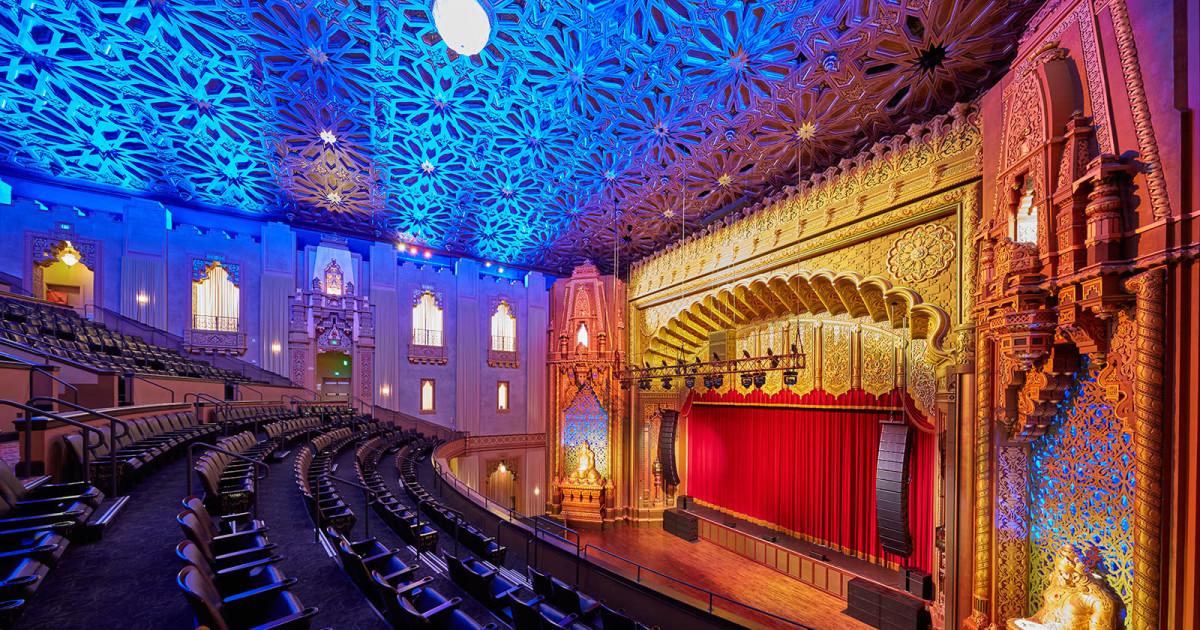 In the second edition of our series of venue reviews, KCPR content contributor Connor Sullivan takes on the Fox Theater, the premier venue for music and culture in the Bay Area city of Oakland.

Due to the historic significance of Oakland in music and it’s place as the cultural capital of the East Bay region, many big and up-and-coming acts stop by the Fox Theater on tours through the West Coast.

There are two main factors with parking in a large metropolitan area for concerts.

The first being that you’re most likely not familiar with the area, so finding a garage or street spot that is walk-ably close to the venue is rather challenging.

The second is car safety, so parking on the street is not very preferable from a security standpoint, but is usually unenforced around the time doors open for the show.

We parked on a street about four blocks away and it was free so that was pretty dope.

Whether we can attribute that short walk to luck or our parking Spidey senses, the world may never know. Additionally, the Fox Theater is only one block from a BART station, but being a SoCal person, I don’t really understand that dark gypsy magic.

The Fox Theater’s main stage and auditorium area is massive, and they had some AC going the entire show. I’d say it was a solid attempt by their AC unit, but right before King Krule came on, I had the privilege of performing the classic tie the sleeves around the waist to look like a late 90s’ step-dad.

This is preferable to the around-the-shoulders look for a few reasons, the first being you won’t look like an 80s’ frat dad, or as know on Urban Dictionary a “sweater-douche.” Secondly, your neck won’t transform into a marshland ecosystem and sprout fungi.

Again, I’m tallish, so this is rarely an issue, but the complaints from the local munchkin community don’t go unheard. The stage had a normal height, maybe three or four feet, unlike the Catalyst with its six-foot-high stage.

Side note, if you ask me to let you get on my shoulders, I will – 100 percent of the time – say no, and get a very sick pleasure from doing so.

8/10, There were people taller than me in front of me.

The Fox Theater has the cleanest bathrooms I have ever seen in a concert venue. Fellow concert attendees, Collin Moore and Erin Regan also gave their praises.

“Not one, but two bathroom attendants”-Regan.

Unlike some other venues, I did not feel at risk for a single virus of Hepatitis C entering my bloodstream when I used their facilities. Their sinks used handles, which is always an improvement over those mercurial automatic spigots that never give you enough time to effectively wash your hands.

10/10, Bummer that none of the toilets were gold or adorned with jewels.

At times during the opener, Kelsey Lu’s (who is very talented and has steel pipes for vocal chords), performance, the crowd noise superseded her music, which was a little frustrating. After the show, my ears had that weird tickling going on, not a post-grenade ringing but tickling.

Maybe that’s just me being a hypochondriac, or the over-boosted bass that was vibrating my innards. I’m no audio engineer, but the mixing could’ve used a little work.

7/10, Is that tickling unhealthy? Seriously, I’m actually concerned for my health.

The venue is about 20 minutes from UC Berkeley, and by the looks of their schedule, they have some big names performing there constantly. Berkeley student, Tony Oliverio, says that out of the Another Planet Entertainment venues, the Fox Theater is superior to the Greek Theatre and Bill Graham Civic due to its smaller, more indie atmosphere.

Based on the quality of their interior, I assume their backstage areas are nothing short of phenomenal.

Oakland is on the incline for nice restaurants, as we noticed walking past a few chic-looking breweries filled with trendy looking thirty-somethings, enjoying what seemed to be local-craft-microbrews.

Is gentrification the right word for this situation? Maybe.

9/10, Oaksterdam, America’s first Cannabis College is right across the street.

Attached to the venue is a little bar/eatery called The Den. It appeared very modern and hip through the window, and had a lot of comfortable looking chairs. They also had four bars downstairs alone, so you AA members won’t have to go far for your next fix.

Their Yelp reviews are a little spotty, however, but I didn’t eat anything from there, so take that with the same grain of salt that you would take with any other Yelp review.

This place has the most beautiful interior details I’ve seen at a theater.

The only place I’ve been that’s even comparable is Santa Barbara’s Arlington Theater. The design on the website is described as “Indian, Moorish, Medieval and Baghdadian.”

Fellow concert attendee Collin Moore and myself guessed Persian, so I suppose we were close enough. Two large statues flank the stage on both sides, and their eyes and chest jewels glow when the lights go down, giving the standing area an Indiana Jones temple-vibe.

Its $75 million renovation in the early 2000s’ was worth every penny.

10/10 They need to figure out a way to incorporate flames.

I consider this category to be a function of the type of performer, and not really the venue’s fault if they get a poor score here.

That being said, this crowd was filled with a bunch of dirty millennials.

The amount of Thrasher apparel and septum piercings was a bad omen from the beginning. Got smoky mid-show, but that’s to be expected at almost any concert these days. Interestingly enough, the staff let a lot of the crowd-surfers go, where at other shows, I usually notice them pulling the down as soon as they see them.

Either negligence or just letting kids be kids, doesn’t matter to me.

If the venue you are attending next has a website, visit it.

The Fox Theater’s website is exceedingly helpful and well designed, and has a whole tab explaining why we were stupid to park on the street, listing a litany of better places to park.

The venue was nice enough to give out water cups at their bar area, and allowed for water bottles and cameras to be let in. I wouldn’t have left my water bottle in the car if I had known that. However, the crowd decided it was a good idea to just drop the plastic cups they were given on the floor, creating a knee-deep layer of plastic. (Hyperbole).

Plus three points for the cameras and water bottles, minus two for the crowd being inconsiderate.

The Fox Theater is a solid venue, and they have a lot of cool bands dropping in during the summer, so I can see myself returning. The ticket prices are a bit higher than I would’ve liked, but the quality of the venue makes up for it.

8.7/10 If the statues had fire things, it would be a much higher score.
Connor Sullivan is a KCPR content contributor and a third year student at Cal Poly. He visited The Fox Theater, and liked it enough to write this review about it.

SLO Donut Company is Expanding. So What?