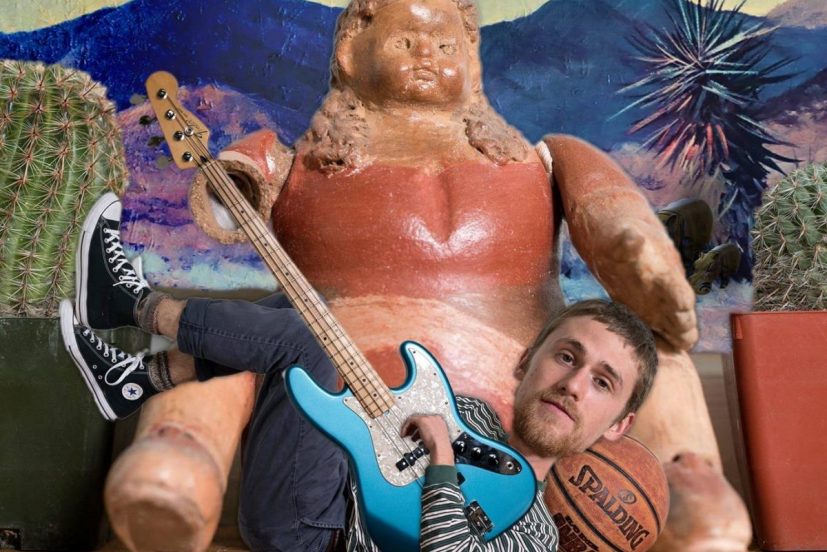 Twenty-five year old Sven Gamsky is creating a unique style of music out of his garage in Oakland, California.

His artist alias is “Still Woozy,” which resembles the self-described “dreamy” and “out of it” feeling of his life.

His music is a mixture of acoustic and electronic instruments that combine to make a funky, laid-back, abstract sound.

Although Sven has personally only released several songs, he has been playing for sixteen years and loves doing so. He feels that it’s one of the few things that’s always exciting and never feels like work. His first and favorite instrument is the guitar, which makes features in all of his songs.

In 2011, Sven began the math-rock inspired band, Feed Me Jack, alongside four other musicians. The band released their first album, “Chumpfree,” in 2012 and last, “Ultra Ego,” in 2016. Sven’s musical contribution was guitar and vocals. Although he enjoyed being in the band, he felt limited and choose to go solo for more control of the sound. Now, he is focusing on his solo project and is working to transition from being a full-time artist.

Sven thanks the internet for gaining popularity, and believes his success could not have been possible without it. When Sven released his second solo song, “Cooks,” in July 2017, he had few expectations, and just put it out wherever he could.

Shortly after, Sven received multiple texts regarding his newest song as it had been put on Spotify’s “Fresh Finds” playlist. The playlist has over 20,000 followers, which kickstarted his popularity and allowed him to grow exponentially from where he was.

He is currently featured in four Spotify created playlists, totaling over 830,000 followers.

Sven’s most popular songs “Goodie Bag” and “Cooks” total over four million Spotify streams, and his new single “Lucy,” featuring melodious artist, ODIE, has over 400,000 and continues to grow each day.

Sven makes all his music in his garage, where he has a wide range of equipment setup. He uses a guitar, bass, piano, drum pad, and a new top of the line Juno 106 synthesizer. Although only his newest song is feature-based, he recently brought in a drummer for future projects. They are currently underway on a new track, and Sven hopes that the duo become regular collaborators.

Sven’s music style is more geared towards singles and EPs than it is towards albums.

He doesn’t like working for extended periods of time on the same project, as he wants all of his songs to be “real time,” and resemble his progress. For instance, whenever he finishes a song, it is generally released within a day.

Just as unique and abstract as his songs is the artwork for them. All of the artwork is done by Sven’s partner, Amiya Kahn-Tietz. The artwork complements and adds to each of the songs, giving it an increased out-of-it, woozy feel.

Sven’s first solo performance was on December 5th, 2017, when he opened for Knox Fortune. He was very surprised when he was reached out to by Knox’s record label, as they asked if he would be willing to fill an opening spot for the show. He does not have plans for hosting a show of his own anytime soon, as he is primarily focused on creating more music. However, he does have a show scheduled with Gus Dapperton on April 26th in Santa Ana, and he has played with other artists such as Jasper Bones.

Sven published his first music video for the featured song, “Cooks,” on September 4th, 2017. The music video was fun, simple, and weird, featuring Sven and his friends at a basketball court in Oakland. The entire music video, minus the makeup, was entirely done by the group, including the cinematography. Funny enough, the makeup was intended to portray Sven as an old man, but many viewers saw him as a zombie.

Sven’s current favorite artists are: Good Morning, Frank Ocean, Department of Eagles, and Steve Lacy. His dream show would be a co-show with Frank Ocean and it would be anywhere.

His favorite pastime is basketball and he hopes to be playing more live shows as he comes out with more music.

Nick Bishop is a KCPR content contributor, DJ, and a Cal Poly sophomore. He wrote the article. Cover image obtained from purplesneakers.com

Check out Still Woozy at:

Check out Amiya Kahn-Tietz at: