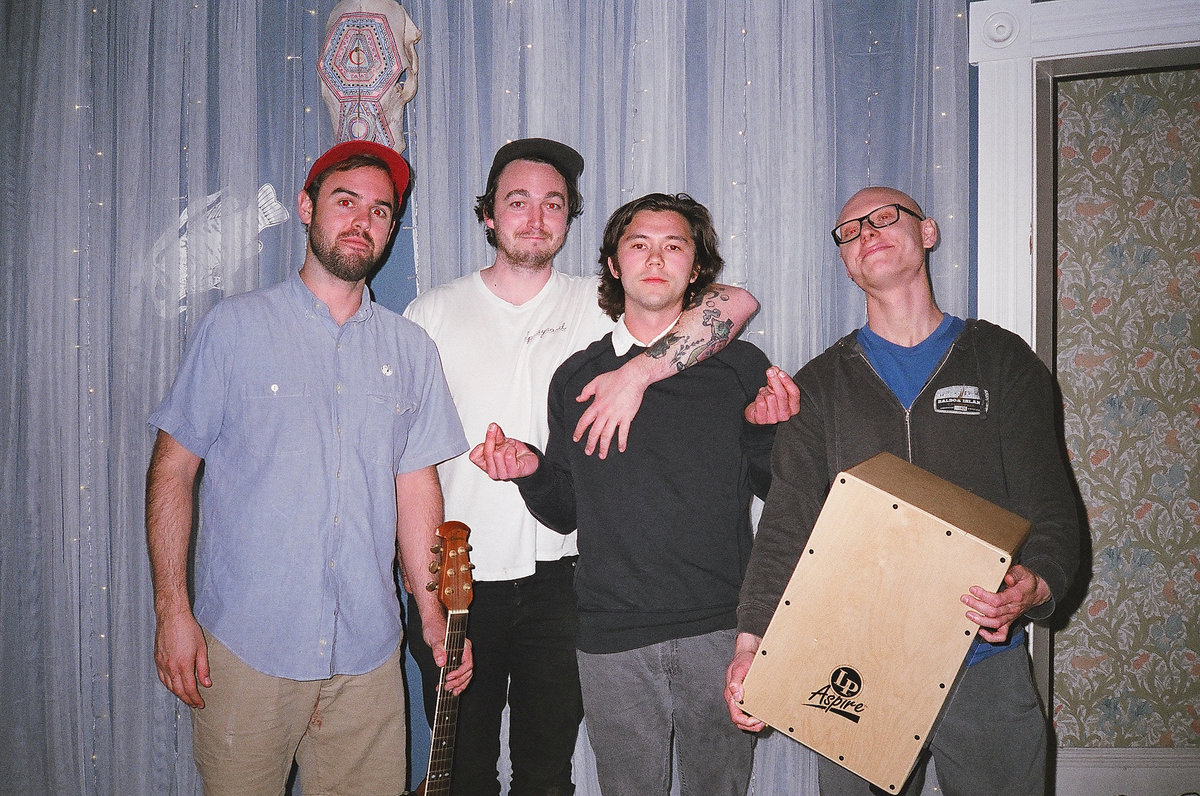 On a Friday long ago, I sat in the back seat of my friend’s Subaru en route to Yosemite. “Let’s Get Breakfast” by Walter Mitty and His Makeshift Orchestra played quietly as we snaked along the winding road.

It was on that fateful Friday afternoon that I recalled their upcoming show in SLO, and slid into their facebook IM’s.

I was no more than three minutes out of the shower when I heard a knock at the door. After working for more hours than I had slept, there was no socialization skills left in me. I let my roommate handle the visitor while I drafted interview questions for Walter Etc, whom I had been expecting to show within the hour.

After hearing my name amidst the “hello’s” and “how are you’s,” I peered around the corner to see them standing awkwardly in the living room.We then scaled a ladder onto my roof, where we discussed albums, electric slop, and SLO.

Dustin Hayes, Russell Park, and Kris Schobert are the remnants of DIY connoisseur collective Walter Mitty and his Makeshift Orchestra. Walter Mitty’s raw and ardent sound propelled them into stardom, but after a few years of making albums and touring, they announced an indefinite break.

Now, after a painfully long several months, they have emerged from hiatus as Walter Etc. They have since lost two members from the original Walter Mitty crew and added another, Brennan.

Their debut album, Gloom Cruise, commenced the band’s new musical direction. “We knew we wanted to make an electric album so we thought, why not just condense the name and tweak the project into a slightly new band,” said Dustin, Walter Etc. frontman.

And tweak they did, for their latest album debuts their folk-punk, folk-pop, and slop roots in a whole new way.

Gloom Cruise is a revolutionary album for these guys, whose previous collections were recorded in bedrooms and basements. This time around, they recorded the album in a studio with guidance from O.G. musician and songwriter Jeff Rosenstock (from Bomb the Music Industry!).

“It was like simultaneously experiencing the studio environment while being starstruck by the producer the whole time,” added Dustin.

All of the tracking was done in just five days (being on rented time), but you can’t detect a single hint of rushed composition. Despite having a producer, an audio engineer, and access to a studio, some backup vocals and percussion were recorded at home in true Walter fashion. Guitarist Russell commented, “It kinda gave us a timeline of when it had to be done by. Otherwise we might still be working on it.”

Initially, they dropped Always Leaving, a brief EP, followed by a split with Diners, before finally releasing their full-length album, Gloom Cruise. Throughout the course of their musical endeavors, the guys in Walter Etc. have created a new genre they call, “slop.” “Nowadays, it’s more expansive. It’s a little surfy, a little indie, still a bunch of acoustic stuff too” commented Dustin.

If you’re like me, endlessly stoked on their music but at a loss of description when recommending them, try “electric slop.”

Dustin and Kris began making music in southern California before migrating up here to SLO, where Dustin attended Cuesta and Kris attended Cal Poly. They met Russell, a fellow Cuesta boy, at a show (a Walter Mitty show) in the Mustang apartments.

“I went to their apartment and they were standing and playing on the couch… you know how they all have the same black couch” described Russell. Dustin added, “Yeah, the show was on that couch. That was a memorable night”.

After leaving SLO, they continued down the coast to finish the remainder of their tour. To keep up with their happenings, check out Making New Enemies. It first started as a blog to plop their leftover slop, and now has metamorphosed into a collective of solo projects, other artists, artwork, videos, and more.

As the interview dissolved into conversation and the clock crept closer to my afternoon class, the rendezvous eventually came to a close. Since I’m not twenty-one, I was unable to attend the show, but I heard it was bitchin’.

Olivia Peluso is a KCPR content contributor and takes over the airwaves from 6-8 AM Friday mornings. She is also a Cal Poly English sophomore. She wrote the article.