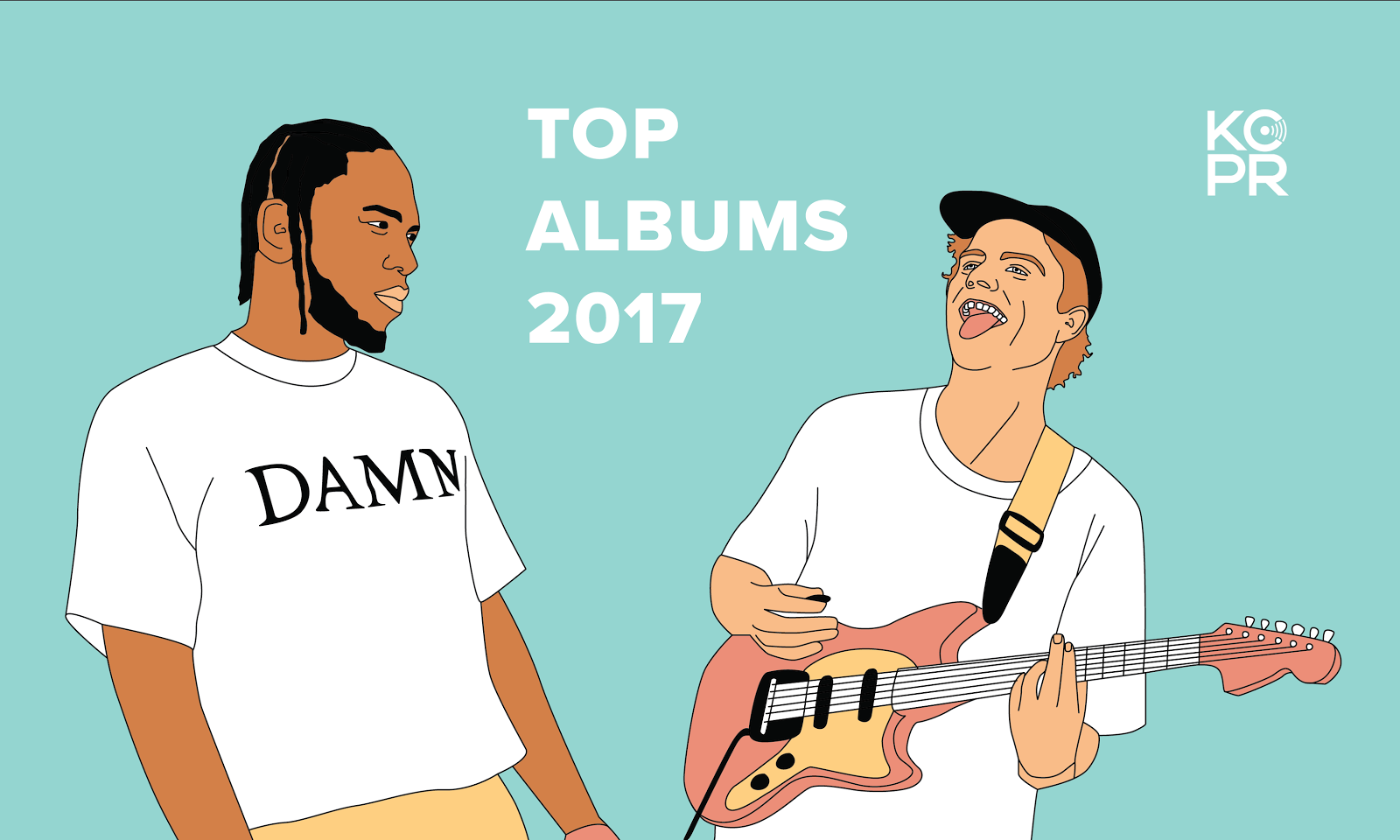 An Interview with Khruangbin

The Pennsylvania four-piece’s latest album moves farther away from their folk-rock roots and closer towards a more electronic, experimental sound. Singer Rob Grote’s vocals are as raw as ever as he shines on tracks like “Capable” and “Ordinary Day.”

Focus Tracks: If Before I Wake, Ordinary Day

24. Bulls and Roosters- Together PANGEA

The new LP from Southern California’s together PANGEA (FKA Pangea) is both a nostalgic dive into classic punk as well as a stonesthrow of creativity into the future of garage rock. With tracks such as “Better Find Out” and “Alison” riffing upon classic artists such as Buzzcocks or The Minutemen, others such as “Kenmore Ave.” reflect the band’s background at Burger Records and expand upon the simple garage rock aesthetic found commonly among LA/OC bands with more intricate instrumentals and high quality production.

Representing from the DMV (D.C., Maryland, and Virginia), Goldlink gives a bouncy album stacked with local artists and tracks inspired from the funk that runs through the veins of his area. His flow is effortless with a sense of swagger that is only enhanced with producers like Kaytranada, Steve Lacy, and Matt Martians, as he paints a picture of life in the DMV  for the listener. Dissolving hip-hop’s dividing lines, Goldlink unites smooth R&B vocals, electronic beats with bouncy baselines, and captivating verses into an album you won’t want to stop bumping.

Melbourne’s favorite seven-piece psychedelic garage prog-rock band churned out five full length albums this past year, exploring themes ranging from microtonal tuning to a collaboration with Mild High Club. Our favorite of the five was Polygondwanaland, the fourth album in the series and the most technically complicated record they’ve put out to date. Releasing the album on multiple platforms for free and encouraging fans to download and bootleg it, this is by far King Gizz’s most ambitious effort to date, and the complicated drum rhythms and odd tunings that comprise this LP elevated it to position twenty-two on our end of the year list.

Focus Tracks: Crumbling Castle, The Castle in the Air

Michigan-based funk band Vulfpeck released their sixth studio album this year. Mr. Finish Line features ten new groovy tunes with numerous features from Charles Jones, Michael Bland, David T. Walker, and many more. The album remodels and builds upon “Running Away” from Joey Dosik’s record, Game Winner. The band teased the highlights of the album as singles leading up to its November seventh release. The album is great for enthusiasts of funk, life, and good vibes.

Focus Tracks: Baby I Don’t Know Oh Oh, Birds of a Feather We Rock Together, Running Away

Described by many as “experimental pop” Michelle Zauner’s Japanese Breakfast pushed the envelope with 2017’s Soft Sounds from Another Planet, expanding upon the themes of electronica and lo-fi found in her terrific debut, 2016’s Psychopomp. With her first release, Zaunter established herself as an indie darling, rising from the depths of bandcamp to find more widespread acclaim, and with songs such as “Road Head” and “Diving Woman,” her latest release continues her trend of success.

Chicago rock band Twin Peaks were very active in 2017. The band released two singles a month from July to December rather than a full album in order to stay on the road touring more. The group is filled with singers and songwriters, which can be seen in the album as Clay Frankel, Cadien James, Colin Croom, and Jack Dolan each sing on a track.

Focus Tracks: Shake your Lonely, Come for Me

Formerly known for his work with Chance the Rapper, Joey Purp, and Vic Mensa, Knox Fortune has emerged as an up and coming solo artist. His first album, Paradise, has a mixture of synth pop and indie rock vibes while also featuring performances from Joey Purp and KAMI. The young singer songwriter found himself on the road for the first time this year, playing shows in his hometown of Chicago as well as New York and Los Angeles.

Focus Tracks: Help Myself, No Dancing

A member of the Odd Future offshoot The Internet and producer for artists ranging from Denzel Curry to Kendrick Lamar, Steve Lacy has elevated himself to the top of the game in the matter of a few years. This year, the Compton, CA musician finally blessed his audience with his first solo project, a collection of neo soul funk tunes produced mostly on his iPhone.

Description: The XX has long been described as creating minimalist pop music, and on 2017’s I See You, the English pop group has redefined their sound as anthems that could fill arenas. With tracks such as “On Hold” and “I Dare You,” the XX has provided some of the most soulful and moving pop music released this past year.

Focus Tracks: On Hold, I Dare You

Philadelphia’s Alex G returned this past year to drop hs second major label LP, Rocket, in which he explored themes of folk, prog, synth, and even distorted hip-hop. Given Alex G’s background as a lo-fi bandcamp artist, this high-quality record is quite a departure from his previous work, and as he polarized fans by incorporating fiddles and banjos into his classic indie sound, it is hard to argue that this is his most developed and mature record to date.

This joint collaboration between two of rock music’s most eclectic musicians brought listeners on a pleasant journey through mellow visions of a midwestern countryside and the Australian outback. Vile’s Bob Dylan-esque croon sifts into the reverb-heavy instrumentals alongside Barnett’s dreamlike voice and abstract lyrics. Whether you’re listening to this album driving down Route 66 on a warm desert night or along PCH through Malibu on a crisp afternoon, it is hard to deny that this is one of the finest records to come out in 2017.

Focus Tracks: Continental Breakfast, Over Everything

The Toronto R&B singer shows off his vocal range as well as a big gospel influence on his latest work. It is easy to see why Caesar is often compared to Frank Ocean and we can only hope to see more from him down the line.

Focus Tracks: Get You, Hold Me Down

Thundercat’s 2017 release, Drunk, combines hip hop, jazz and soul with classic funk. Throughout the twenty-three track album, Thundercat enlists hip hop icons such as Kendrick Lamar and Pharrell, blending modern hip hop into classic funk melodies. Drunk is a groovy, psychedelic and hilarious ride through the mind of Thundercat, embracing the challenges of everyday life. The loose structure of the album allows Thundercat to explore different genres of music, making it one of the most unique sounding albums of 2017.

The Long Beach rapper’s new studio album features a more electronic dance club feel, and the title track “Big Fish” ranks as one of Vince’s best songs yet. Staples confirms that he’s still a Norf Norf soldier on this collection of tracks that push the envelope of his songwriting abilities and expand upon many of the themes explored on his former releases.

In their first album in seven years, LCD Soundsystem returns with a new wave, dance-techno album that delights both listeners old and new. After their run of festival headlining in the past few years, it’s good to see the band back in the studio.

Damon Albarn’s Gorillaz has come a long way since their 2001 debut, including famous features ranging from de la Soul to Vince Staples and attracting the ears of millions. On 2017’s HUMANZ, the cartoon group delves deeper into more complicated production, shifting from their original more rock and sample-based sound and adopting a much more modern vibe. Songs such as Ascension and Strobelite feature booming bass and memorable features, making this one of 2017’s best comeback albums.

Indie rock’s biggest goofball returned this year to deliver his most mature work to date, singing of aging and self-reflection over his classic vintage sound. Adding more synthesizers and electronic instruments this time around, DeMarco has expanded the scope of the music he can produce, delivering an LP that expands upon his past successes and keeps the same formula fresh.

Focus Tracks: Still Beating, One Another

6. Saturation I, II, and III- BROCKHAMPTON

No one has created as much hype in hip hop this year then BROCKHAMPTON. After releasing three full length projects within a span of six months, each equipped with a diverse range of styles, BROCKHAMPTON has carved out a new definition of boy band within the hip-hop genre. The twelve-member boy band, which praises its videographers just as much as it’s lyricist, is committed to doing things the way they want to do them. When most artists release one album per year, BROCKHAMPTON keeps their fans satisfied, releasing three projects in a few months. While the Saturation projects all have a similar sound to most modern hip hop, BROCKHAMPTON has not been afraid to address about politics, sexuality, and racism throughout all three projects. One thing’s for sure, we are excited to see more of BROCKHAMPTON in 2018.

2017 was the year that R&B took over the mainstream charts and no one lead the rebirth of R&B more dominantly then SZA. After two mixtapes, SZA released her debut album CTRL, an album which dives deep into her own personal battles as well as tackling the complexities of modern love and romance.  In a year dominated by “fake news,” CTRL is a refreshingly honest album that unpacks issues most young adults face. However, between amazing production from Top Dog Entertainment and hypotonic melodies, CTRL unpacks these issues in a digestible way.

Joshua Tillman (AKA Father John Misty) renues the genre of piano rock on this forward-thinking and lyrically-conscious LP. Echoing the fears and frustrations shared by many young Americans during this past year, Tillman’s orchestral rock album sums up many of the issues we experienced in 2017. Listen to his album through a pair of decent headphones or large speakers, as this is the work that could fill a stadium (and has, many times).

“Is it wickedness or weakness?” Kendrick Lamar utilizes his powerful storytelling abilities to deliver us another amazing, yet very different album where he explores the duality of the human nature with his own self reflection. Flirting between the undeniable banger of “DNA,” the irresistible bounce of “HUMBLE,” the poppier ballad “LOVE,” and the grittiness of “XXX,” Kendrick explores the workings of his mind by separating them into different conflicting entities in each song. The listener follows Kendrick as he dives into the intricacies of each side of his mind until dropping back into his Compton dwelling self with his concluded song “DUCKWORTH” for the final piece of the puzzle, only to send us back to track one with a single pop of a gun.

Weaving together colorful metaphors and catchy beats, Tyler, the Creator captures his eccentric personality while exploring the depths of his psyche in his latest album. Seamlessly juxtaposing the sweet collection of sounds in “See You Again” with hard hitting beats like “I Ain’t Got Time,” Tyler has refined his seemingly endless energy to create a cohesive piece of work balances his nostalgia and growing pains, all while keep the listener on their toes.

Description: Following up his sublime 2013 debut, 6 Feet Beneath the Moon, Londoner Archie Marshall’s (AKA King Krule) sophomore effort cut deep with many this year, expanding on the dark jazz and smooth rhythms of his past work. With his distinct crooning baritone voice, Marshall sings of loneliness and angst over spacey guitar tones and droning saxophones, delivering this year’s most distinct and memorable LP.

This list was compiled by our KCPR staff DJs.