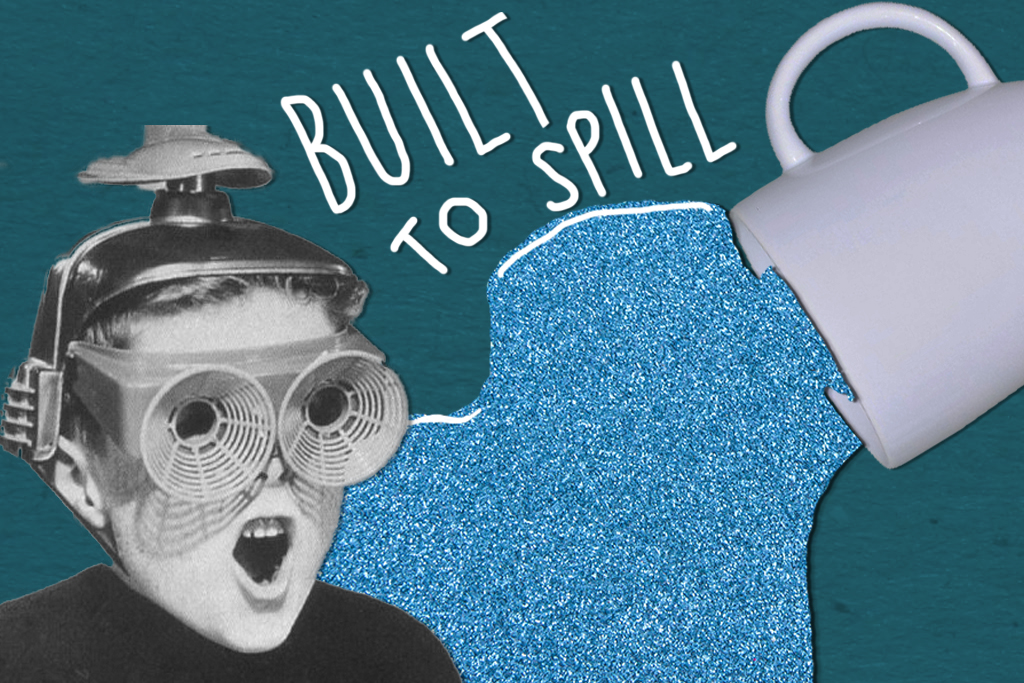 Let’s be honest, Idaho is pretty boring. It’s not exactly a cultural hub – they grow potatoes and boast a goose-killing, blue football field.

And that’s pretty much it, right?

Wrong. The Great State of Idaho claims the best indie rock album of all time.

The best indie rock album of all time? Even better than what the Pixies or Pavement made? Modest Mouse or the Strokes? Even, dare I say it, Neutral Milk?! Yes.

More accurately, Built to Spill claims this title, controversial as it may be. On Perfect From Now On, the Idahoan band achieved a few important feats: it made unpretentious prog rock, posed existential questions without seeming trite, and blended ‘90s pop with an experimental ethic. But before I try to backup my fanboy opinion, I’ll go into the history and context of the album.

Perfect From Now On was a stark change in direction for Built to Spill. On the band’s prior album, There’s Nothing Wrong with Love, they crafted catchy indie pop. Songs like “In the Morning,” “Car,” and “Twin Falls” illustrate the album’s simple, yet clever charm. So clever, in fact, that the album caught the attention of Warner Bros. Records.

Like many of the other big record companies during the early-to-mid ‘90s, Warner Bros. searched for the next Nirvana – a DIY band that had mass consumer appeal. They saw such a potential in Built to Spill that they signed them before Perfect. Ironically, Built to Spill’s artistic direction diverted toward a less commercial sound.

Frontman Doug Martsch didn’t like the first recording, so they decided to record the entire album again, this time with more session musicians. The second session went well. However, while the producer, Phil Ek, drove to Boise for finishing touches, his hot car warped the second recording’s tapes. Finally, the band frustratingly, yet successfully completed the album on the third try.

In late January of 1997, Built to Spill released Perfect from Now On and claimed a sound that has never been replicated. There are only eight songs on the album, yet it clocks in at just under an hour. Each track investigates a larger-than-life theme: eternity, the afterlife, dreams, etc.

The long formats of the songs allowed the band to patiently mix and evolve sounds. Undulating synthesizers swell and fade behind Martsch’s nervous analysis of death on “Randy Described Eternity.” The song recounts a Christian youth group leader, Randy’s dizzying explanation of eternity using a surreal analogy. After establishing eternity’s astronomical size, Randy poses a terrorizing question – “Where you wanna be? Where will you spend eternity?” – heaven or hell? A juvenile Martsch responds,“I’m gonna be perfect from now on.”

“Stop the Show” is the most contrasting composition, forming atmospheric post-rock into catchy pop. The song switches back into an experimental sound: a bizarre, broken guitar solo fades into a dark instrumental to close out the suite.

On the epic “Out of Sight,” Martsch flips from passionate shouts to sweet melodies reminiscent to what you’d hear on There’s Nothing Wrong with Love. It closes with Martsch droning “It goes on and on and on and on…,”  again invoking one of the album’s main themes: eternity.

The album is a bona fide indie classic. But the best of an entire genre? I’d argue so.

There are an insane amount of superb indie rock albums. Of those, there are only a handful that actually created a brand-new sound. Sure, The Strokes’ Is This It and Interpol’s Turn on the Bright Lights were impeccable, but they strictly followed an expansion on the their influences.

Perfect, as well as The Pixies’ Surfer Rosa, Pavement’s Wowee Zowee, The Microphones’ The Glow Pt. II and a few others displayed music that sounds like nothing else. And of these, Perfect, to me, seems the most rawly innovative. This isn’t to say Perfect From Now On was made in a vacuum – of course Built to Spill expanded on the sounds of their influences as well (Neil Young, Dinosaur Jr., and others). But on Perfect, Built to Spill mixes these influences so thoroughly that the end-product is nothing like the influences.

There’s a lot to grapple with in these eight songs. So much so, I still manage to pick up on newfound details in the songs’ lyrics and sounds after years of listening to them. In 1994, Built to Spill’s music was simple yet charming, blue-collar yet elegant, as if to reflect my Californian misconception of Idaho. But in 1997, their music became complex, abstract, and paradigm-shifting. So who knows, maybe Idaho isn’t so boring after all.

P.S. In case you couldn’t tell, I was mostly talking out of my ass. I’m sure you’re right, In the Aeroplane Over the Sea is much better.

Matt Goulding is a Cal Poly Business graduate student and KCPR DJ, gracing the airwaves as Matty Ice from 12-2PM on Wednesdays. Ally Millard is KCPR’s Associate Creative Director, a Cal Poly art and design junior, and an on-air DJ, spinning disks as Cosmic Sans from 2-4PM on Mondays. She created the illustration.