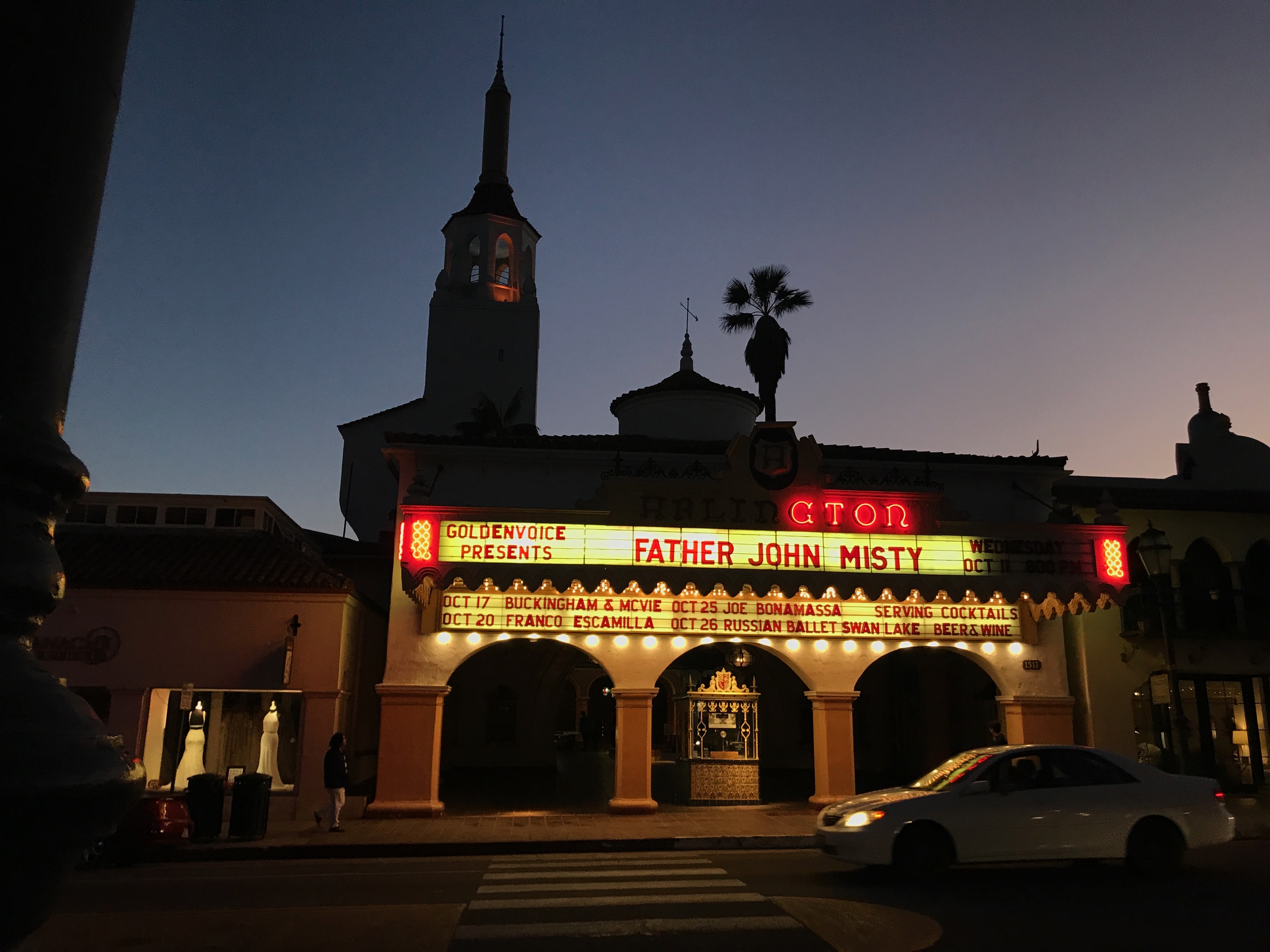 An Insider’s Guide to Vagabond Music and Arts Celebration

The large orb came down from the ceiling, the lights turned low, and out he walked. We were assuming that giant circle would turn into the recognizable crescent moon that so very much represents his newest album, Pure Comedy.

The creatures from the album artwork waltzed across the screen as Father John Misty started his superb show with the classic song that named the album. His voice melted like honey over the microphone while the lights shone up around him and the audience, highlighting his ferocious dance moves of flailing limbs.

Dressed in a suit a tad too short for him, the lanky lumberjack-resembling man graced the stage with instrumental and vocal talent. Switching between three guitars throughout the set, Father John Misty showed off a mix of songs from all three of his albums: Fear Fun (2012), I Love You, Honeybear (2015) and Pure Comedy (2017).

Each song flowed from one to the next with ease, except for when FJM was stopped by an eccentric elite audience member who screamed “JOSH,” with which Josh Tillman politely replied, “Yes? Is there something I can do for you guys?”

What was especially mesmerizing about the concert, besides the two hours of live beauty, was the ambiance and the artwork surrounding the experience. Father John Misty stood center stage surrounded by a full band bathed in bright white light. Each song was a new experience as the wall behind them warped and whipped colorful waves of light into intricate patterns and designs.

A favorite display was an array of rainbow mountains that passed by the audience as if they were on a hot air balloon watching the scene float by below. The screen also boasted the entertaining compilation of scenes that make up the music video for FJM’s song “The Night Josh Tillman Came To Our Apartment,” where he has a one night stand with himself. 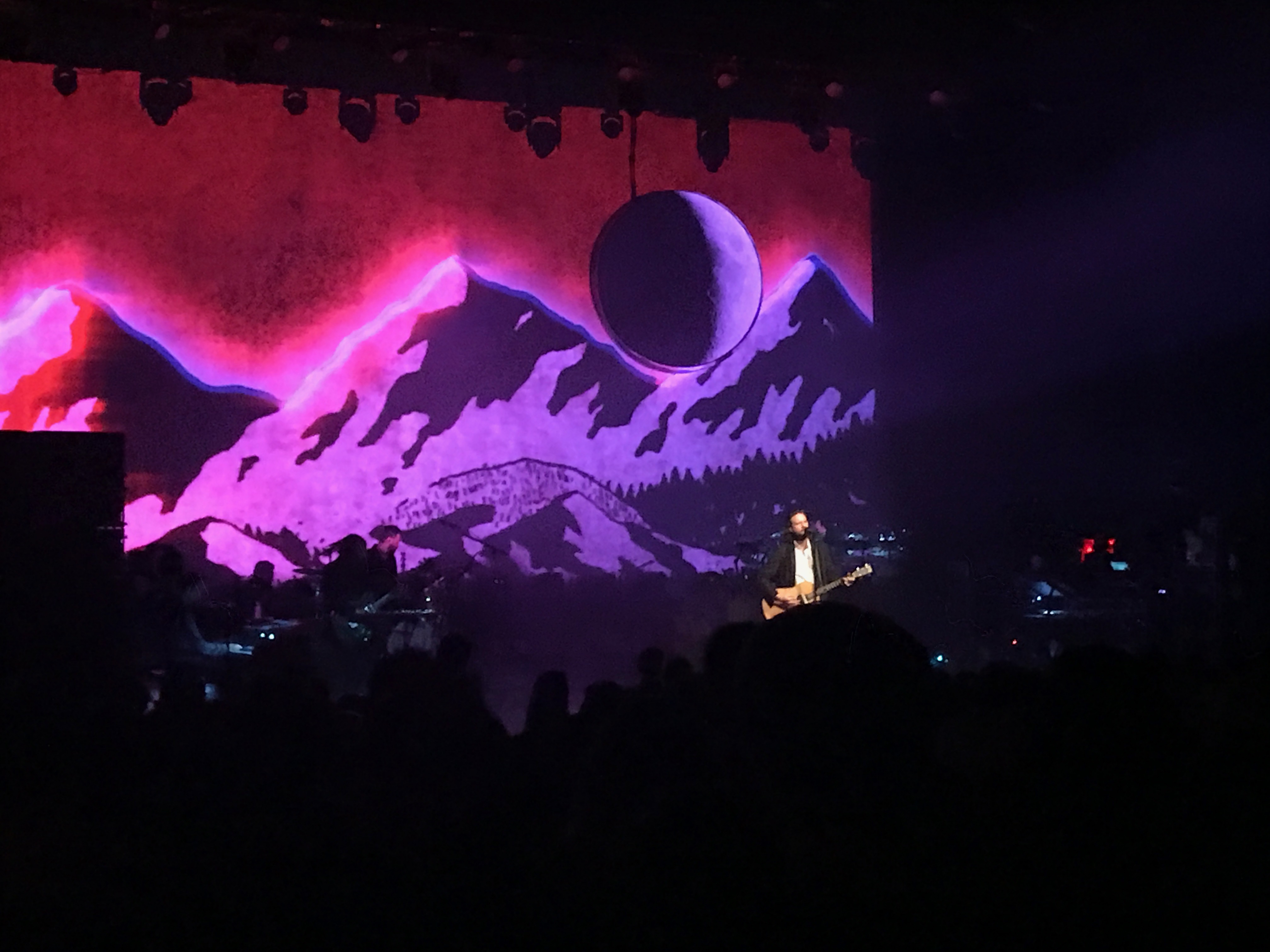 Ending the set with a loud, richly lit, color filled rendition of “I Love You Honeybear,” Father John Misty bowed with a smile and walked quietly backstage from under the ceiling stars of the spanish style theatre. Of course, like all avid audience members do, we all waited with wishful thinking of what the next song might be. Most of the crowd had already started to shout their own suggestions.

“Real Love” someone screamed from the back. With an eruption of applause, FJM took the stage amidst an astoundingly alluring array of colors that made a tie die-like animation, moving to the gentle guitar strum of his most popular song. Finishing the night with “So I’m Growing Old On Magic Mountain” and “Holy Shit,” FJM thanked his crowd a number of times while crawling to meet his loyal fans.

He walked along the stage, sweeping his eyes along the arms extended towards him.

There was a small group of fifteen that crowded around the back entrance of the Arlington Theatre waiting for the man himself. When he graced us with his presence, it was as if he was walking out of a daze. Soft-spoken and quiet, Father John Misty greeted his fans with warm, welcome handshakes like that of a friend. Smiling at each individual, eye contact was a definite, he thanked them for coming to his show.

He looked at us. Smiling with his teeth and eyes, he approached us for hugs all around. We thanked him for his music and I told him I work at a radio station in SLO, where we all love his music.

Mikaela Duhs is KCPR’s video editor and a Journalism senior. She attended this concert, wrote these words, and took the pictures.