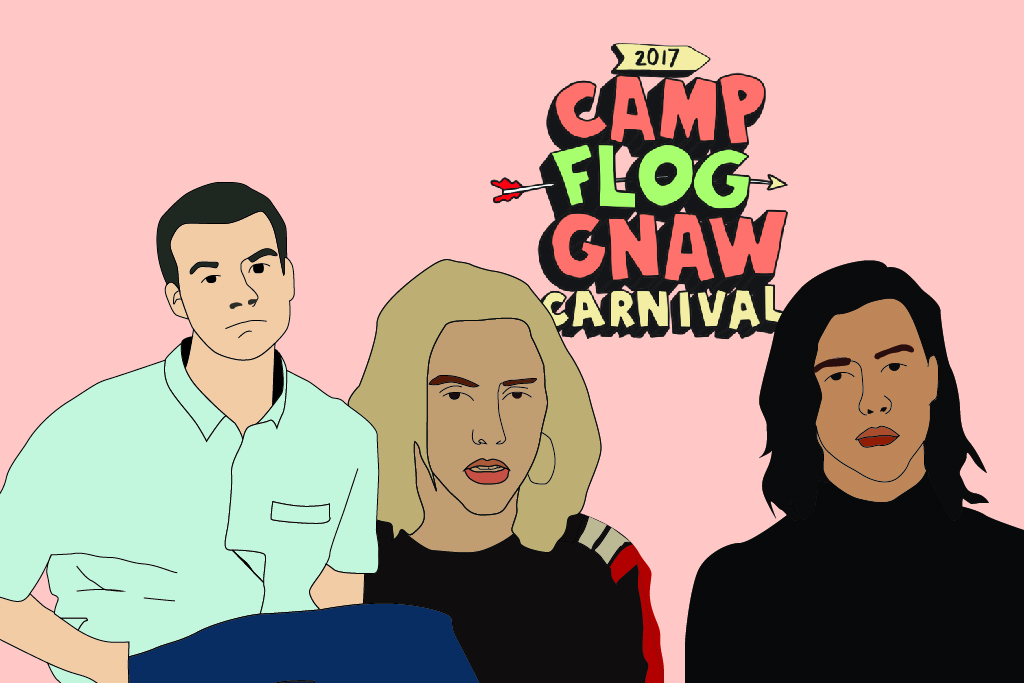 ‘Tis the season of daylight savings, pumpkin spice, and if you’re in San Luis Obispo, 105 degree weather. Most importantly, this latter third of the calendar has graced us with the return of Camp Flog Gnaw for the sixth time.

While others enjoy their ~Halloweekend~ festivities, a lucky few of the populus shall convene at Exposition Park in Los Angeles for two days and twenty-five hours of performances from the greatest names in music today. Yes, such massive headlining acts like A$AP Rocky and Lana Del Rey may attract your eyes, but I beg you to explore all names on the lineup.

Further down the line up lay gems, utter treasures of artistry that stretch over a wide range of genres and sounds. Year after year, Tyler, The Creator and his associates have handpicked magnificently curated programs for us. These are a few names you shouldn’t miss out on.

Alex O’Connor, otherwise known as Rex Orange County, provides progressive yet homey tracks that rival the warmth of southern California sunshine. His style is a beautiful brew of hip-hop, indie, and jazz that makes it fitting for any and all moods.

Raised in an English suburb but now based out of London, the nineteen-year-old has risen to an abrupt and exponential rise in fame after dropping his latest self-released album Apricot Princess.  A self-taught drummer himself, the album plays around with synthesizer, piano, rap, and stints of full-band verses that culminate a pleasantly odd sound.

He was also recently featured on Tyler’s latest album, so you can almost definitely expect to hear “Boredom” at some point throughout the festival, but I urge you to not accept that as sufficient. Catch Rex Orange County’s set and see him in his element.

One day a long, long time ago, in a galaxy known as Orange County, the two worlds of grunge punk and ‘90’s electronica collided in an ethereal explosion, and in the aftermath lay two twin brothers, Wyatt and Fletcher Shears.

Their music is experimental, acidic, and punchy, while remaining consistently captivating. With Wyatt on vocals and bass and Fletcher on drums, they are the quintessential electro-punk duo.

Their self-proclaimed genre Vada Vada is all about boundless creative expression, and such a mantra is reflected time and time again in their music, fashion, and live performances.

Brockhampton is a collective consisting of talent from Texas, Connecticut, Florida, and Ireland. All fifteen members are incredibly diverse; there are rappers, producers, vocalists, pianists, and creative directors. They all share a house together in LA, where the creative juices flow day in and day out.

The product: three full length albums that lace intense rap verses, sweet choruses, unreal beats, and a bunch of other incredible shit seamlessly into pithy anthems. They are the world’s braziest boy band, but their influence does not end there. They are a brand, a band, a creative collective, a family, a TV show, a record label– tell me when to stop.

Does the fact that he gained 100,000 followers on Soundcloud at age seventeen intrigue you? How about a series of three studio EP’s with several million streams each? Well, then lend me thy ear.

Sam Gellaitry is a unique breed of DJ, whose music makes you want to drift out to space and rage face simultaneously by layering twinkling melodies with progressive drums to create an electric sound unlike any other. He hails from the sleepy yet spirited city of Stirling, Scotland, where he began making music at age ten and still resides today.

His set will be a combination of ambience and rhythm that transcends that penetrates clubs, sunset hikes, and any form of escapism alike.

Olivia Peluso is a KCPR content contributor and takes over the airwaves from 6-8 AM Friday mornings. She is also a Cal Poly English sophomore. She wrote the article. Ally Millard is KCPR’s Associate Creative Director, on-air DJ, and a Cal Poly art and design junior. She created the illustration.