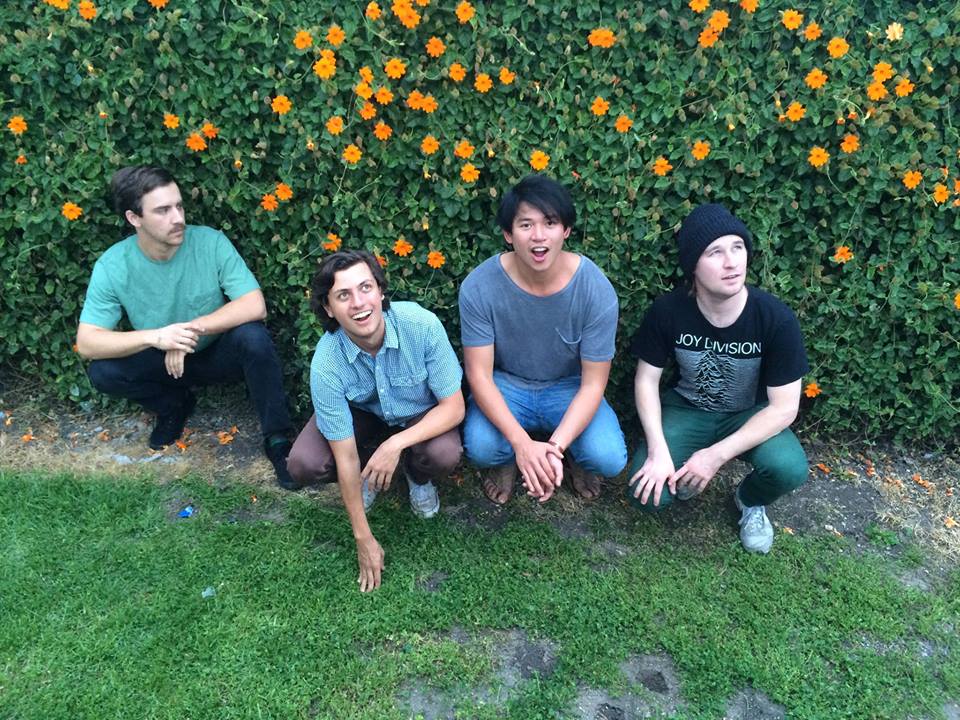 KCPR’s DJ Ridsdale sat down with local rockers Shoot the Mariner to discuss music, touring, and their upcoming gig at Shabang IX.

Shoot the Mariner is Daryl Dingman, Matthew Hahn, Daniel Potts, and Liam Hedriana. Formed in 2014, STM has provided San Luis Obispo, as well as various venues around California, with a distinct sound of heartfelt math rock and emo few local bands can replicate.

Ridsdale: You guys have become somewhat of a staple in the local scene of San Luis Obispo. What were your musical backgrounds before forming STM?

Matt: I started in like 7th grade with some friends, just playing in a garage, and that was just like a very long-lived punk band, probably longer than it should’ve. I think until like sophomore year of highschool.

Daryl: What were you called again?

Matt: Exmore. It was really bad. And then I just played in bands, I’ve never really had a sophisticated learning style.

Matt: Exactly. Mostly Dammit covers on repeat. And then I played in another band after that with a really good friend who I lived with freshman year at Cal Poly, and that was really cool, just kind of like a folk-rock band.

Dan: I feel like we’ve all got similar stories, I also in 7th grade was in a band. My first middle school band was like exactly what you’d expect from south Orange County, which was like Van Halen covers and like Lady Gaga covers.

That’s mostly how I got my drum chops. That was the first band I played drums in, and I joined that band when I was like 17. I was ten years younger than the other guys in the band. I recorded at the music studio they worked at. And then I came to college and immediately joined the band Pleasantly. That was more psych music, but the jazz drums lent themselves to that music.

And then Daryl and I got paired up through KCPR; I play drums in Shoot the Mariner because I joined KCPR and got linked up with him as my mentor. I played my first gig with them at the open mic my first quarter here.

Daryl: I played in jazz band from age 11 until the end of highschool. I was also in marching band for a year. My first band when I was 12 or 13; we just played Fall Out Boy and Hello Goodbye covers, and we were just little 12 years olds stoked on Fueled by Ramen.

When I was entering high school, I ended up starting a band with people I met in marching band and we just played Arctic Monkeys, indie-rock copy-cat music. It was good, it was like bar-rock, I was very into Dire Straights at the time, and we were called The Sinatras.

Then I graduated to another band in 2010, and we were really into a lot of proto-Burger bands, and we played a lot of scrappy surf rock. And then I started a new band, and that’s when I tried getting original. I got really into Battles and Mission of Burma, as well as Pink Floyd, and I made a really experimental psych-rock band called Troupe de Goon. And then my last band before STM was called Big, which was basically a proto-version of STM.

Ridsdale: Going off of the topic of music experience, what is your strangest tour experience?

Dan: We played a bar right by the Regent in LA that was literally empty, except for the doorman, who was playing some sort of fish game on his iPad and smoking a bowl.

Matt: That guy was smoking all the bowls, he was smoking so much fucking weed, it was crazy.

Dan: The entire time too.

Dan: We were on tour with Honestly, Nothing (shoutout, RIP), and it was just us, and the opener, who was this big, probably 45-year old dude with long blonde hair, cutoff jean shorts, and a telecaster just like singing some kind of weird Replacements-esque, ‘80’s-ish rock.

Daryl: But he was in with the bar too. Like this guy was a STAPLE.

Dan: The bathroom didn’t have a door also, there was just an open toilet facing the front entrance. So if you were trying to go to the bathroom, like, it was a free-for-all.

Daryl: Ugh, that place was awesome.

Matt: That was my favorite show on the tour.

Ridsdale: You mentioned Honestly, Nothing and a few local artists, so going off of the more local topics, do you think the local scene in San Luis Obispo has a defined sound?

Daryl: When I started going to Cal Poly, there was a big ambient scene, and that was mostly with non-Cal Poly students. That was a big thing for a while.

There was also punk rock happening, and this was like 2012. That laid-back indie like Mac DeMarco and Kevin Parker hadn’t really hit yet. There were a lot of operative bands that were around, but for the most part, the sound transitioned from a lot more avant-garde to something a lot more digestible.

Matt: The main shift was when Royal Suns started coming up, which was right around 2014. They were really popular at the time.

Daryl: Then we started playing. I don’t think that any other bands have come along that reflect us. I think we’ve always sort of been the black sheep, but a lot of the bands have navigated towards what the Royal Suns have established.

Shabang usually showcases where the bands in the college-age demographics are. It’s usually surf rock, psych-rock, and blues rock.

Matt: The thing with SLO is that there’s not so much going on, so everything gets a little representation.

Dan: I think there’s definitely been a lull of music in the past year. Not that many shows, house shows been deterred due to increased fines.

Matt: Hit us up if you want us to play a show at your house!

Dan: Make that the headline.

Ridsdale: Going off of the local music scene, do you have favorite any favorite venues in town?

Dan: Definitely the Warehouse. It’s one of those forbidden-fruits because shows there are so rare. We played there last fall. A lot of people don’t even know the Warehouse exists.

Dan: Yeah, it’s behind Food for Less. It’s like a fifteen minute drive to get there.

Ridsdale: Going back to your own music, the transition between your first album “Undergrounds,” and your most recent release “Ancestral Prayers” seems to be a drastic jump in style. What do you see in the future for your music?

Matt: Our songwriting will be more straightforward. That was definitely more of an audio-project.

Dan: AP was more of a one-off idea, there wasn’t a huge deliberate change in direction with ancestral prayers, we just had the ability to record, and we like playing music.

Matt: It’s fun to just do off things like that.

Dan: And Matt’s good at producing.

Daryl: It was a deliberate experiment though. We didn’t have the intention that it would be an album, but that we would run through some ideas. We recorded in the middle of my work break.

It was very spontaneous. We wanted to generate this completely organic being that would really stand on its own like Undergrounds, but in a different manner.

Dan: We recorded our first album at Speak Studios on Orcutt. Basically, we record our own stuff now. I personally, infinitely prefer home-recording.

Ridsdale: Alright, and at the end of our interviews at KCPR, we like to play a little game called Swipe left/right. So I have a few topics, I’m just going to say them, and you can discuss and swipe right if you like them or left if you don’t.

Dan: I think we can all agree that we like Steve Albini.

Daryl: I saw Shellac in 2016 at FYF. Steve Albini has an approach to not just music, but the organization of music.

He had a really good lecture and paper he did in 1992 about the state of modern music, and he did an update in 2016, and it’s all about the relationship the fan has with the artist now and how that has evolved to this place where the fan and artist both have complete autonomy and there’s no middleman necessary.

Dan: He plays an aluminum guitar too, which are literally the dopest guitars ever.

Dan: I consider myself a refugee escaping it. Although the music scene really developed recently.

Daryl: Swipe right I guess? Riding your bike with a bunch of people sounds pretty cool.

Daryl: Definitely a traffic hazard, but I’ll forgive that.

Matt: Gizmo’s really rad and he’s the guy who started it.

Daryl: Eh, it’s hard to listen to. Swipe right, I guess, but it’s definitely a nuanced genre. It’s like the corned beef of music genres; you need to sit down and have a drunken argument over it or something.

It’s really bombastic, and a lot of music I listen to now is derivative of No Wave, but it’s way more refined. Very important foundation for freaks like us.

Daryl: Uh swipe left, this interview will be an hour longer if we elaborate on that.

Ian Ridsdale is a Cal Poly political science junior, KCPR’s editor-in-chief, and an on-air DJ, taking over the airwaves as DJ Ridsdale from 4-6 PM on Saturdays. He interviewed Shoot the Mariner and wrote this article.