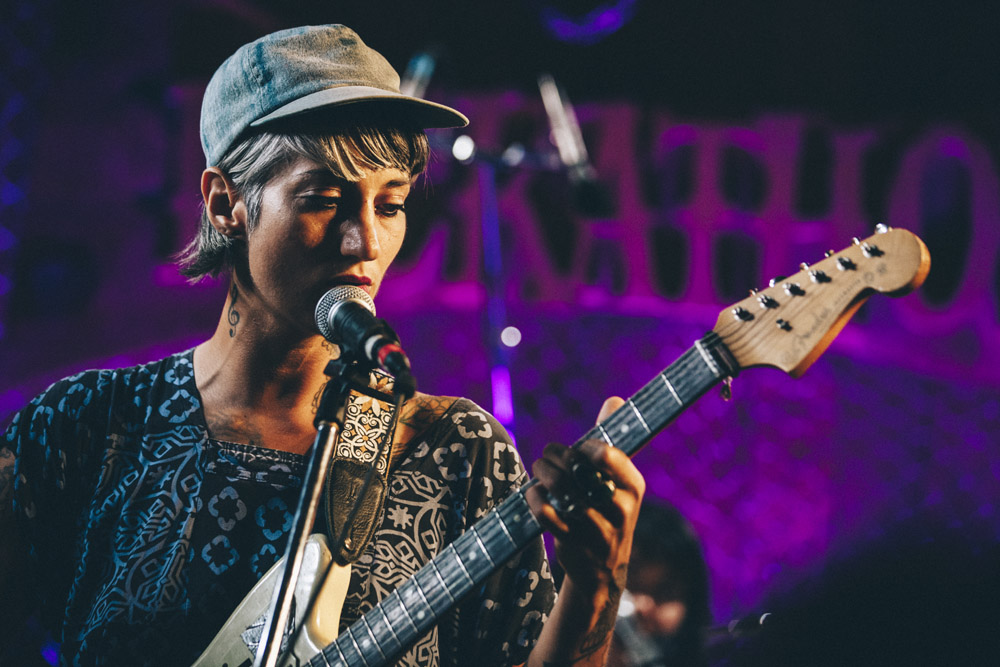 Tall and confident stands Luz Elena Mendoza, the lead singer and front-woman of the music project that is Y La Bamba– a mesh of sounds that range from eclectic indie folk to strong Mexican melodies, as explained by Luz’ roots.

Having grown up in a Latin country myself, I always struggle to find music that is able to cross cultures and imprint universally, which is why I was thrilled when I found out that Y La Bamba, a band that does just this for me, was going to be playing at our local SLO Brew on September 26th.

I gathered my troops and headed to SLO Brew, feeling determined to speak to Luz. Little did I know I was in for a lot more than just a chat.

A specific incident that occurred during her performance that night paved the way for the conversation we would be having later on. An incident that at the time seemed awkward and unnecessary proved to stand as a symbolic, larger point.

As Luz’s lively performance unfolded, she reached the moment where she sings “Ojos Del Sol,” an intimate song off of her newest album that contains heartfelt emotion. In order to capture exactly that, she courageously asked the SLO Brew pint night crowd to keep quiet. Her request was countered with laughter and more noise. As she assessed the situation, she candidly turned to the crowd and told everyone she would not be playing the song, and simply continued on to her next one.

When speaking to her, we felt it was only natural to bring up this incident and hear her thoughts and reasoning on the matter.

She explained to us that at 35 years old, she’s really been trying to test her own personal boundaries, while still trying to speak truth in an objective way. Throughout her earlier music career, she often felt the pressure that’s propelled onto artists such as being forced to go onstage, being asked to play certain songs when performing, or as seen in this specific incident, disrespecting the art that is being delivered.

Luz made it clear she was neither upset nor angry at the situation. For her, it was an opportunity to listen to that voice that resides inside of us that we often tend to disregard due to those outside pressures, and actually follow it.

In the following audio file taken during our conversation with Luz, she tied an incident like this one to something she interpreted in a universal way: using our voice in loud places and learning to defeat that noise that tends to hinder us from speaking out.

“It’s about learning how to exercise your voice, not my singing voice. Your voice. Either if it’s playing music or drawing or talking or being at work or talking to your brother or your friend, or whatever. It’s learning how to exercise that it’s a part of yourself. To know what you think, to know what you disagree with, to know what you agree with, to know what you fear, to know what you want to be challenged by, the things that trigger you, all those things. For me, the older I’ve been getting, especially these last couple of years and these last couple of months… Me being up there, it’s just a part of me… It’s just me being a person. The same way you’re talking to me and I can ask you the same questions. You know what I’m saying? It’s the same thing. So for me, when I do anything, it’s because I’m trying to grow as a person. So when you guys said that SLO Brew wasn’t the right place, it’s the perfect place! It’s the right place for me to be at. It doesn’t matter if people weren’t quiet or whatever, for me it is an example of what ends up happening, check it, it’s a metaphor of how exhausting it is to fucking try to use your voice. I used my voice, and I yelled my voice with love and compassion but there’s still another noise in the background… That doesn’t mean I’m gonna stop. That doesn’t mean I’m gonna avoid those places. And yeah it’s the most exhausting and draining fucking thing.. You know? So people do avoid those places, and yeah we need those safe places to be in those safe places where we can feel comfortable with our homies of color, or women being with women… But it’s visceral. And it hurts too.”

To Luz, using her voice seemed to be just as important as being vulnerable. We oftentimes don’t accomplish much if we put our voices to use without giving them a chance to exercise the power of vulnerability. By opening up, we create the platform that is needed for connection and mutual understanding.

As the conversation came to an end, I felt nothing but respect for Luz Mendoza. More than just an amazing musician who’s art I devotedly admire, she is a person. A person who feels, who hurts, who shares, who seeks challenges, who uses her voice, and who’s driving force is her powerful vulnerability.