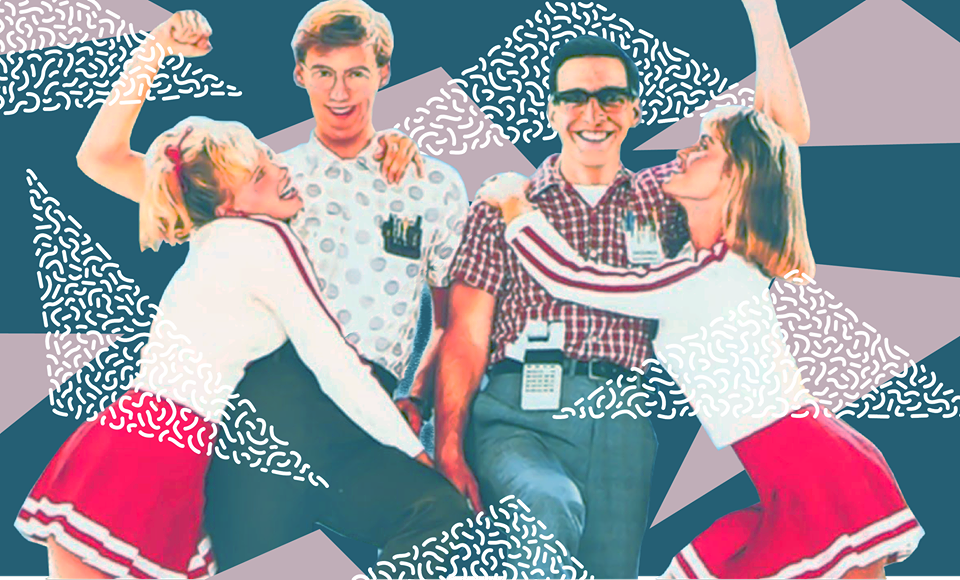 Little-known fact: Revenge of the Nerds (1984) was slated for a remake, originally set to be released in 2007.

After just two weeks of filming, the production was cancelled.

The movie’s filming location, Emory University, reportedly kicked the production off campus after reading through the script because they felt that it was too raunchy. The production company has since stated that there is very little chance that a Nerds remake will ever happen. Although hailed as a cult classic, some modern critics have noticed some troubling aspects of the movie, particularly the promotion of misogyny and date rape.

The film centers around a group of university “nerds” who are determined to get even with the school’s jock fraternity for kicking them out of the dorms. They accomplish this “revenge” by stealing lingerie from the frat’s sister sorority, secretly photographing the girls, and selling nude photos of one of the sisters. The most controversial scene is when one of the nerds tricks one of the sorority sisters into having sex with him by stealing her boyfriend’s costume and pretending to be him… this is arguably rape by deception.

William Bradley of The Mary Sue, a pop culture blog, writes, “Honestly, this is not how most people remember the plot of 1984’s Revenge of the Nerds, a movie that, according to the Internet Movie Database, grossed $40,900,000 on an $8,000,000 budget and is described by one IMDB user as ‘An Instant Classic for the Underdog in All of Us.’ That’s kind of how I remembered the movie too, until I watched it again a couple years ago, for the first time as an adult, and was immediately struck by the way the film plays sexual exploitation and assault for laughs.”

Revenge of the Nerds is not the only ‘80’s classic to have this issue. In John Hughes’ Sixteen Candles, high school heartthrob Jake Ryan’s girlfriend, evil prom queen Caroline Mulford, is passed out drunk in his bed. Fed up with Caroline’s ways, Jake lets a freshman “geek” take her in his car, giving him permission to rape her in saying, “I have Caroline passed out in the bed upstairs… I could violate her in ten different ways if I wanted… Have fun with her.”

Slate writer Amy Benfer reflects on this scene years later, commenting, “The scene only works because people were stupid about date rape at the time. Even in a randy teen comedy, you would never see two sympathetic male characters conspiring to take advantage of a drunk chick these days.”

I love ‘80’s movies, but all of these scenes give me serious pause. With more and more people noticing how rampantly society perpetuates rape culture and misogyny (think Steubenville, Brock Turner, and the “grab ‘em by the pussy” tapes), it seems unlikely that such scenes would fly with today’s audiences.

Bradley adds, “Some, of course, will argue that I take these things too seriously; it’s just a dumb campus sex comedy, for crying out loud. But I can’t help but feel that this movie actually has something to tell us about our cultural attitudes surrounding violence, misogyny, and notions of masculinity.”

Make no mistake, I’m not arguing that John Hughes movies should be banned or that you shouldn’t enjoy watching a goofy comedy. However, I do think that it’s important to acknowledge that we’ve seriously turned a blind eye to Hollywood’s part in spreading misogyny.

In other words, we shouldn’t be afraid to critique the sexism of a movie just because it’s considered a “classic.” If we can’t do better when it comes to entertainment, then society itself will never do better.

A movie doesn’t need to degrade women or make rape jokes to be funny. It’s about time we move on to better, more intelligent attempts at humor.

Kelly Martinez is a KCPR staff member and Cal Poly Journalism major. She wrote this article. Whitney Engelmann is KCPR’s creative director as well as a Cal Poly art & design senior. She created the artwork.