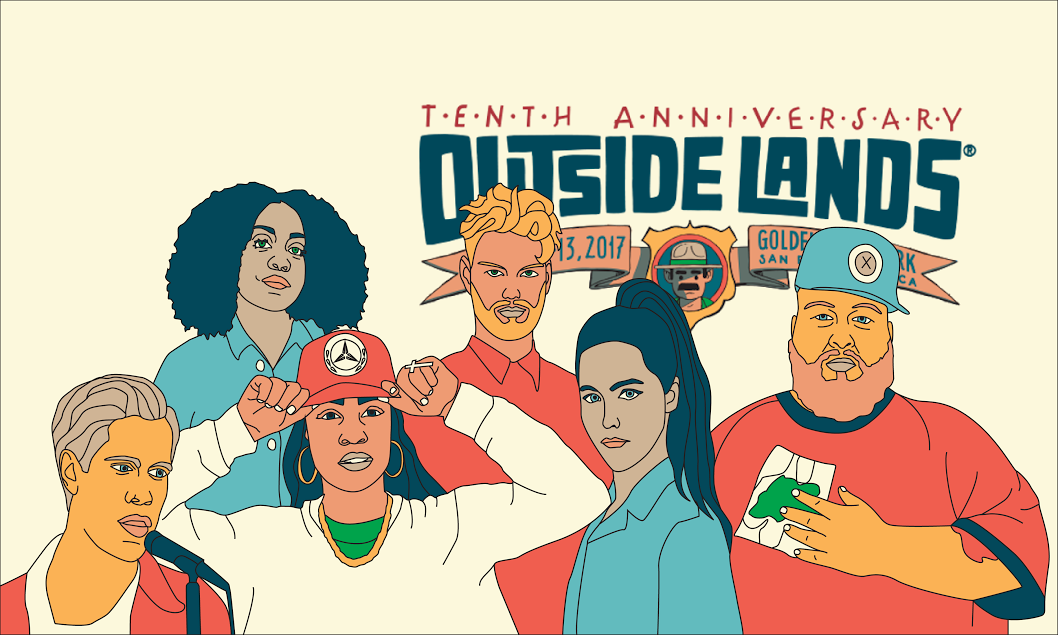 It has been ten years since Outside Lands first blessed the Bay Area with three days of music in San Francisco’s Golden Gate Park.

To celebrate its tenth anniversary, Outside Lands has curated a diverse lineup, combining electronic, rock, hip-hop, and everything in between. With headliners like The Who, Gorillaz, A Tribe Called Quest, and Lorde, it’s easy to overlook the smaller names on the lineup.

While the headliners represent artists currently dominating the music landscape, the smaller names on this year’s OSL lineup are on the rise, preparing for the big stage. Before you head out to Golden Gate Park this year, make sure you check out our list of lesser known artists at Outside Lands that you need to see.

With a nice budget and plenty of connections, music festivals can book talent from all over the world, allowing for uniquely curated lineups. Unfortunately, most music festivals commonly overlook the local artists that create the sound and culture of their cities. In a festival that features artists from around the world, Kamaiyah stands out as one of the few artists on the Outside Lands lineup that embodies the sound of the Bay Area.

Representing Oakland, Kamaiyah is a product of the Bay Area hip-hop scene. After gaining attention from her debut single, “How Does It Feel,” Kamaiyah released her debut album A Good Night In The Ghetto, putting her in the spotlight and landing her on Pitchfork’s top albums of 2016 .

Make sure to check out her single “How Does It Feel” and find her performance at this year’s Outside Lands.

Somewhere between a 1980’s throwback and modern lo-fi synthpop, Porches stands out as one of the most unique artists on this year’s Outside Lands lineup. Originally formed in 2013, Porches is the product of New York-based artist Aaron Maine.

Make sure to check out Pools on Spotify and check them out on Friday.

For hip hop heads, Action Bronson is a staple in today’s hip hop scene. However, the average festival goer might not recognize his name, which flutters around the middle of today’s biggest music festival. The former chef-turned-rapper is not your average MC.

Whether rapping about cooking five star meals or rhyming over Quentin Tarantino samples, Action Bronson always finds inspiration in the abnormal. When it comes to showtime, Bronson is known to surprise even his most dedicated fans.

Here’s a little list of ridiculous things Action Bronson has done at his live shows:

If you still need more reasons to go see him at this year’s OSL, there is always a chance that he might cook for fans out of his food truck. Finally, Bronson recently released the single “Let Me Breathe” and is expected to drop a new album, Blue Chips 7000 later this summer.

Check out the wild video for “Let Me Breathe” below.

Artists frequently do not like to be boxed into genres, but Sofi Tukker should not have to worry. Out of every artist on the OSL lineup, Sofi Tukker has to be the hardest artist to categorize into any genre of music.

Make sure to see her live on Sunday at Outside Lands. I am sure you will be dancing.

Coming out of the grassroots Chicago hip hop scene, Noname has solidified herself as an artist to keep an eye out for at this years Outside Lands. A self-described poet and rapper, her lyrics tell stories of who she is and where she is from. Whether describing growing up in Chicago or struggling with the difficulties of becoming an adult, Noname’s lyrics give listeners an intimate glimpse into who she is as an artist.

Her sound is soulful as she uses pianos, xylophones, and wind instruments throughout the production of her new album. After countless features with Chance the Rapper, Mick Jenkins, and Saba, she released her debut album, Telefone late last year.

Make sure to check Telefone out and catch her at Outside Lands on Friday.

Looking for a way to support college students trying to make it in the music industry?

If so, then look all the way down the OSL lineup and at the very bottom you will see Berklee College of Music. Yes, they are the last group listed but they should definitely not be missed.

Berklee College of Music is one of the largest independent music universities in the world and has produced artists such as John Mayer, Quincy Jones, and St. Vincent. The university is conducting a program where they choose eighteen students to perform at music festivals across the country.

Make sure to check them out on Friday at this year’s Outside Lands.

More artists to check out:

Jesse Hynes is a KCPR DJ and Cal Poly economics senior. He wrote this article. Whitney Engelmann is KCPR’s creative director as well as a Cal Poly art & design senior. She created the illustration.