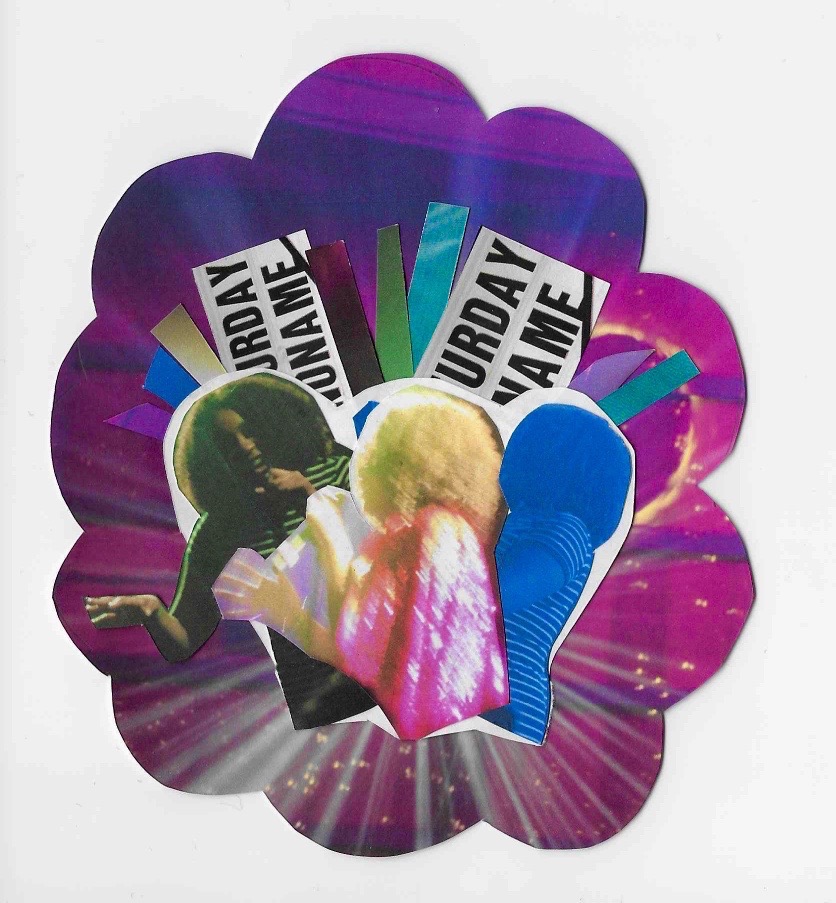 “Everything is everything, a cigarette for a wedding ring.”

Noname is gritty, genuine and smooth as hell, which is why we had to see her live.

We first heard Chicago rapper Noname’s captivating and cool style in 2013. She was featured on Chance the Rapper’s iconic album, Acid Rap. In “Lost,” she’s relentlessly honest, saying that she wants to stop seeing her psychiatrist. She closes her hard-ass, yet gentle verse proclaiming, “The only time he loves me is naked in my dreams.” A slight lisp at the ends of her words and a certain calmness in her voice, her rhymes are distinguishable.

Noname leaves out no details; it is clear that her raps are a one-way portal to her soul.

At the end of July 2016, Noname’s long awaited debut album Telefone came out. It’s a short and sweet mixtape that lays her heart on the table for all to see and feel. Cell phone ringtone samples are sprinkled throughout and Noname gracefully raps over them, with the help of features like Raury, Xavier Omar, Saba and Rayvn Lenae. A pleasant mixture of fun and serious tracks, Noname kills it. She’s embraces her inner kid, hates the police and misses her old lovers. Telefone is something we can all relate to.

We, DJ Roomba and DJ Encarnacion, got to experience Noname’s flow in person at the Chapel Theater in San Francisco’s Mission District. Entering the venue on February 18th, we and other concertgoers were greeted by purple lights, a large disco ball and a DJ set that included pop and hip-hop hits Drake’s “Hotline Bling” – a thematic nod to the the headliner’s debut album.  This was to be the seventh stop on Noname’s sold out Telefone tour. With extra shows added due to popular demand in many cities, this was her second show of the night. 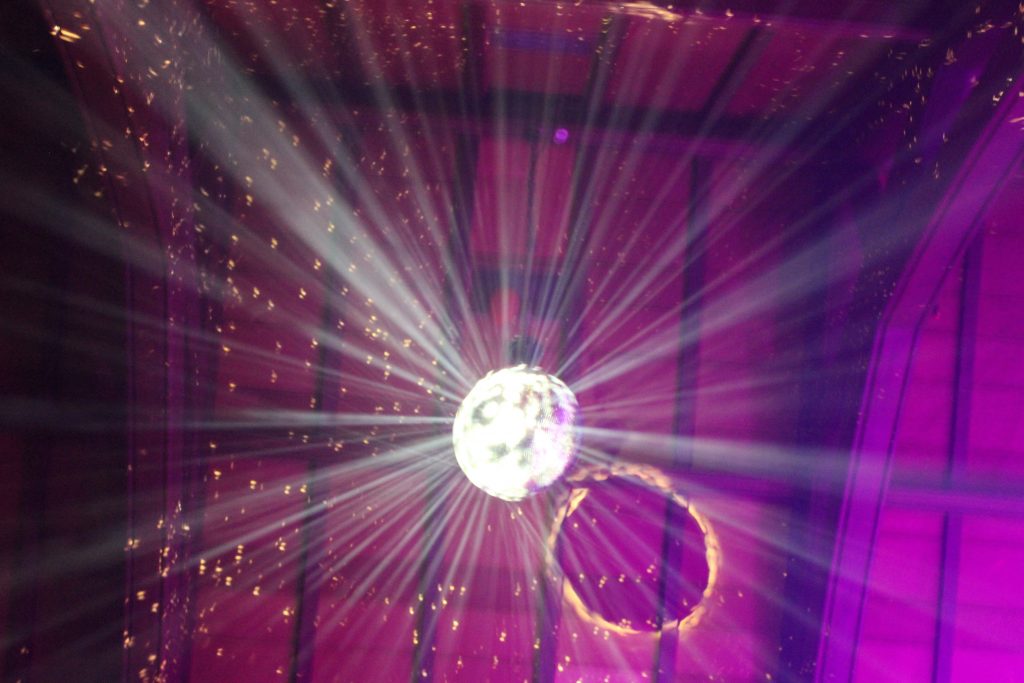 As the long line of people on Valencia Street waited to enter the concert hall, the onstage DJ introduced the opener – Ravyn Lenae.  With a youthful attitude and small stature, Lenae had some trouble commanding the stage between songs, but her performance captured the room.  This disconnect can likely be explained by Lenae’s age, the Chicagoan singer turned eighteen in only January. Still, her voice evoked the maturity and strength of an experienced artist.  Her bouncy, danceable R&B songs, like “Right of Spring” and “Free Room” – a track she described on stage as ‘house-fusion’ – captured the crowd, and showed promise that this won’t be the last we hear from this young, emerging artist. She ended each track with a blasé, “so that’s that song,” which was followed by a roar of adoring applause.

Once Lenae left the stage, the crowd geared up for the main attraction.  As they waited, a projection on stage displayed the words “Noname Brand Presents: 773-tele-fone,” a reference to Noname’s home area code in Chicago.

Then fans’ Tweets from 2016 began projecting, demanding to know when her eagerly anticipated album would drop, such as “my dealer got me waiting, noname got me waiting, this shit fucked up.”

This anticipation was mirrored by the thick crowd packed into the hall.  Cheering commenced as the band broke into a soft tune and the backup singers began to sing, “Telephone…he wants to give you directions home,” an excerpt from the Erykah Badu classic, “Telephone.”  It was to this song (and to many raised phones) that the MC finally emerged. 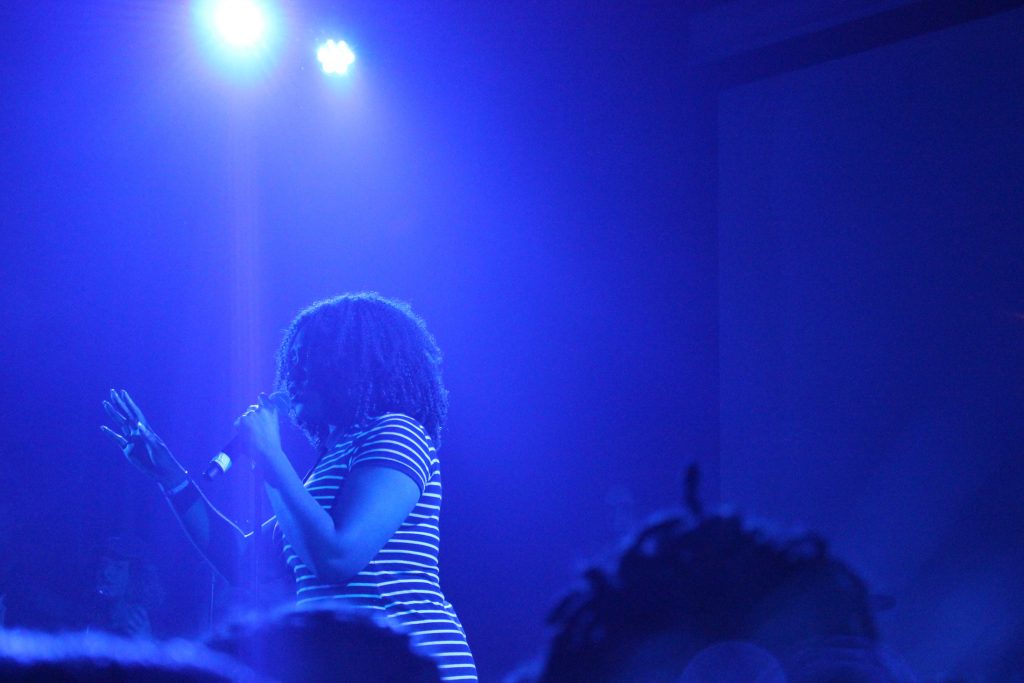 Outfitted in a collared dress and sweet smile, Noname commanded the stage as only an experienced performer could.  Her comfortable attitude matched her laidback, apparently effortless flow.  Among hits from her album, like “Everything is Everything” and “Forever,” during which she was joined by Lenae, she performed notable features, including Mick Jenkin’s “Comfortable” and the aforementioned “Lost.” They crowd loved it.

She briefly left the stage near the end of the show, only to reemerge in oversized sunglasses and a red sequined cape emblazoned with her name.  As a projection of a fireplace took up the screen behind her, she proceeded to perform a steamy rendition of “Contagious” by the legendary Isley Brothers and R. Kelly, her only cover of the night.

When she left the stage, nobody was ready for it.  Shouts and chants of “Noname! Noname!” echoed throughout the hall until she finally returned alone, drink in hand, and chided the crowd to be quiet.  “Chill,” she grinned, “I came back.”  Once her band joined her on stage, she closed the show with her hit “Shadow Man,” with Phoelix present on bass to perform his feature.  Like the rest of the concert, the encore was groovy, graceful and over all too quickly.

Based on the overwhelmingly positive response from the sold-out crowd at the Chapel that night, it’s clear that this won’t be the last mixtape we hear from Noname. Noname had a blast, we had a blast; it seems like she’s got it figured out.

Representing her gender and her city, she’s the whole package.

Jillian Keegan wrote the recap of this concert. She’s a KCPR DJ and Cal Poly biomedical engineering senior with a show on Thursdays from 4 p.m. to 6 p.m.

Lucy McNeil, who also contributed to the writing and shot some photos, is also a KCPR DJ and Cal Poly psychology junior; she commands the airwaves on Wednesdays from 2 p.m. to 4 p.m.

Listen to KCPR over the airwaves on KCPR San Luis Obispo 91.3 FM or KCPR.org