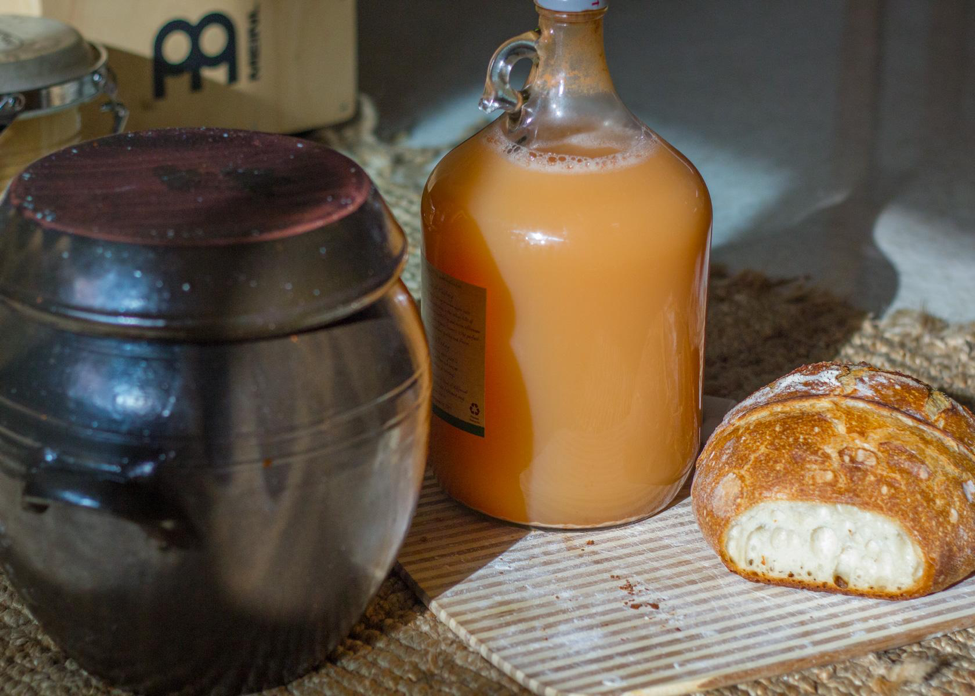 I wandered into what would usually be a stark and monotonous apartment, but instead was greeted by a door left ajar, piles of driftwood and a plethora of instruments bordering the room.

I felt like I was peering into a culture I that I didn’t know existed. I began to think of the infinite pathways of knowledge sitting behind doorways that have yet to be opened. One person’s expression of a certain hobby or art form can be the gateway into an entire realm of creation. Their passion may become an invitation to others in search of a creative outlet.

I sat down amidst the sea of eclectic decorations and trinkets to chat with Joey Pressley about his hobbies as an enthusiast in the art of fermentation.

Pressley is a biology sophomore at Cal Poly. Last year in the dorms, he branched from his  interest in science and eagerly delved into the venture that is fermentation. He is drawn to the naturalized and personal elements that the process offers. He described his process to me, and what it means for anyone who enjoys sourdough bread, kimchi or some hard apple cider.

Experimental: I’m by no means an expert in any of them, and it’s just a series of trial and error, and working from there.

Natural: one of the reasons I do what I do, is it’s a way to introduce a more handmade process into what I put in my body which is important to me

Shared: one of my favorite things about making stuff is when I get to bring people over, and it makes them so happy. 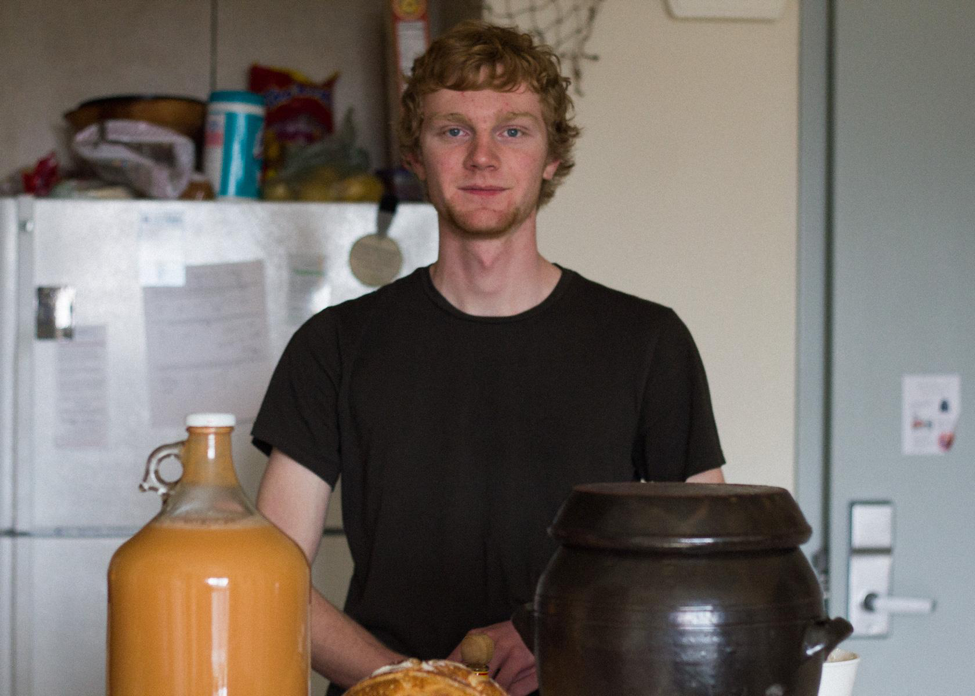 Besides brewing the hard apple cider, what else do you like to make?

I bake sourdough bread, which is made with wild-caught yeast. When I start making it, bacteria in the air colonizes the batter and causes it to start bubbling. I think it’s really cool because the bread captures the flavor of the place, because depending on where you are, there are different organisms living so it changes how it tastes. I also ferment Kimchi.

What initially sparked your interest in fermentation?

I started on cider first. One of my friends last year in Cerro Vista had some cider going, and I was really struck by the simplicity of it. All you do is put yeast in apple juice and let it sit.

But I’m still a newbie as far as brewers go.

That’s super interesting, I was unaware there are so many individuals who devote a lot of their time to this craft. How would you describe the culture surrounding it?

There’s totally a huge following around this. People get crazy about fermenting things, and I’d say I’m well on my way myself. It’s definitely a unique way to approach your food.

What’s the significance of keeping passions like this alive?

Making food is one of the highest art forms out there. It’s a marriage between the science of what’s actually going on, versus the direction you want to take it. There’s an infinite amount of changes you can make, and your decisions will affect what you end up with. So choosing those artistically can give you something that you’re proud of.

Going off of that, how would you define “art?”

I’d say art is just any way of embracing the chaos and complexity of what’s going on around you in the universe. For example when I make bread, I put some starter in with the yeast and I can’t see what’s going on. It’s all up to chance, what the universe is throwing at me that day, and then you get the end product. Part of that is realizing that yes I did make this, but what it really comes down to is the yeast doing what it needs. I just kind of let it happen. 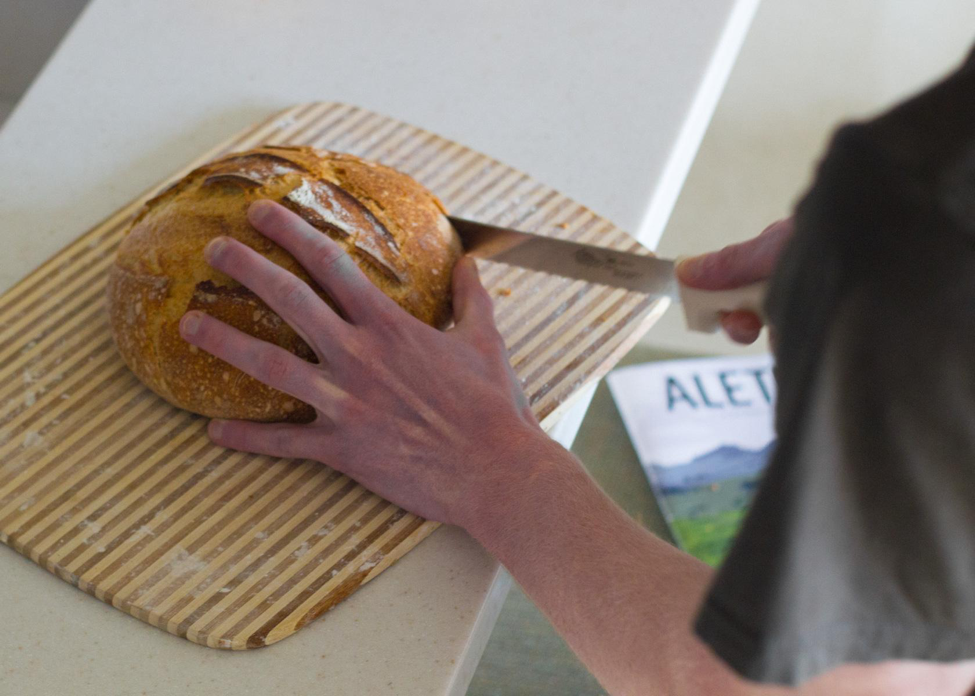 So it sounds like a little bit of your knowledge in chemistry has helped play into this, how has being a STEM major allowed you to take this craft further?

I’m more interested in the science of going on when I’m creating, so it allows me to get a better grasp of what’s going on. For example, yeast are happy at warmer temperatures. To understand how each of those variables impacts the end product is important, but it also isn’t everything.

There’s a joy in appreciating it, but you have to really push to control every single possible parameter. But you also have to learn how to accept failure. You sometimes try something and it just doesn’t work out. That’s just the way it is. It doesn’t even mean you did anything wrong, it’s just chance.

You talked about how you love making food because it puts that localized element into it, can you elaborate on what that means to you?

If you look at the way we eat now, it is totally disconnected. We’re not there for the production of our food. We don’t know what kind of shady stuff they’re doing. But honestly being present and active in that process makes it so much more rewarding in the end. It shows through to other people too. When they taste something that you’ve made, they really feel that, and that gives me a sense of satisfaction too.

There’s been research on research on research showing that if you eat things that aren’t sterilized and homogenized, it’s healthier for your body. In kimchi, you’re eating bacteria that’s present in the environment. From a modern food perspective you might think that’s dangerous, but you can also get sick from eating too many steroids.

It says something because we did not evolve in a sterile environment, so that’s reason enough to believe it. We’ve been fermenting for thousands and thousands of years, and I think carrying that forward is important to me because it’s a great human tradition. The fermentation of alcohol is one of the most primitive aspects of human society.

Fermentation may be unfamiliar territory to some, but in Joey’s case it becomes a way to watch life happen. He harnesses elements of nature through a series of trial and error and with the help of time, is left with a damn good jug of hard apple cider that’s about as organic as it gets.

Ally Millard is an art and design sophomore. She wrote the article and took the photographs. Millard also spins tracks on 91.3 FM KCPR San Luis Obispo and KCPR.org on Sundays from 10 a.m. to noon.