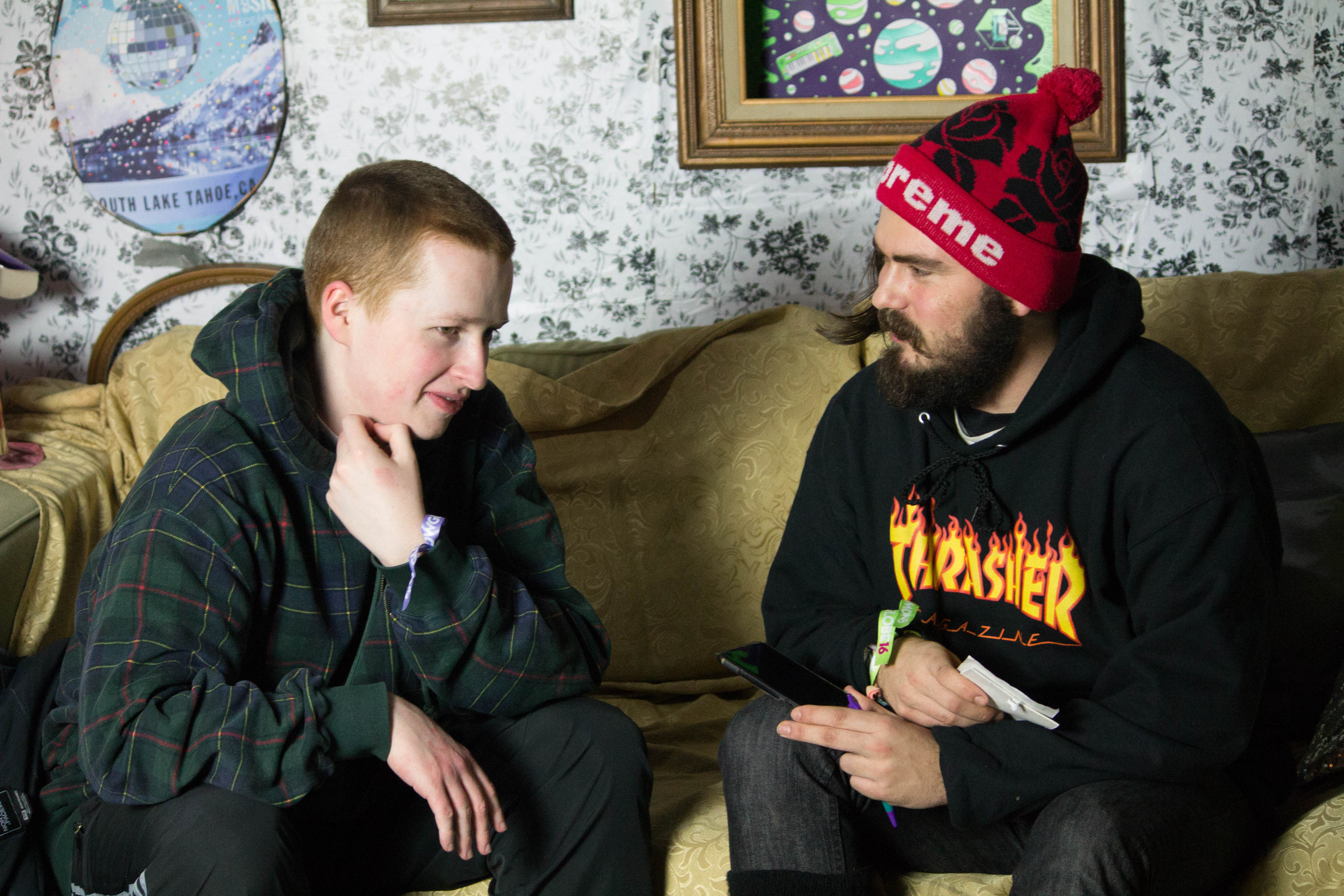 You may recognize his name in the super small print on that festival poster, or you may know him from his days as a member of the Soulection crew.

Sam Gellaitry, who was just announced to be performing at Coachella and Lightening in a Bottle later this year, stood in the artist area keeping to himself or speaking softly to a few close friends. The 19 year-old rising star from Scotland had just come off the stage after performing at SnowGlobe Music Festival. Young, but undeniably impressive, he signed a deal with XL recordings. That means Radiohead, Kaytranada and Adele are among his label mates.

We sat down with him to talk bagpipes, Soundcloud, and jazz. The conversation went like this:

You are from Stirling, Scotland. Do you think that growing up there helped influence your sound?

Sam Gellaitry: 100%. The fact is that there isn’t much of a music scene there. When I started, my brother was using this software because he had this hobby of doing this really hard-style house music. He was putting a Capella over it. This was when I was 10 and he was 15, just mucking around. That was on our family laptop, so I started just messing around with it and sampling tracks on YouTube. I was really into French House.

With the help of the internet, I was able to have all of the world’s music.  I was able to explore it and do it by myself and really develop a unique path is music as well. Even now, man, I’ve seen recently when all of this stuff happened to me, a lot of people are really focusing on making music which is amazing. But before no one was doing it. So I’m glad I’ve inspired the people back home and stuff, but back in the day it was literally just me. It’s a lovely place too, man. The scenery and everything, it all adds to the inspiration and stuff.

Soundcloud has definitely helped you in your success. What do you think of the current state of the service? There is a lot of things going on with copyright and songs being taken down.

Sam: I just got an official remix taken down and it’s the on same label that I’m on. It’s just like, “What’s going on?” I think literally I was one of the final people to really embrace how good it was at the time. But then again, it just went.

I think it’s just too cluttered and that happens to a lot of things.  There just, like, is not really a quality control. It’s just a lot of feed. There is no real excitement, I’d say. As in, the excitement of the search for things and to know there’s things that you can find. It’s just hard to navigate it these days because there is so much stuff.

Of course people like to talk about your age [19] and how you’re young in the game. Do you think that has helped or hindered your success, being young and coming up on the scene?

Sam: It’s kinda done both, man. I don’t want to be known for my age because that’s not what it’s about, but it’s nice to be complimented on like, an early achievement, if you know what I mean. It’s nice to be in the same category of people who are a little bit older. I’m not like really used to that. I usually hang out with people that are the same age and all that stuff. Being able to, not even compete because there is not competition in music, but to be in the same category is really a big compliment to me. To be able to surprise people by my age is kind of nice as well. I mean, I don’t want to be known just for that.

I was reading up on you. I found out that your dad at one point had a hobby of making bagpipes?

Sam: That’s his business man. It’s a hobby, but he still does it seriously. That’s like his trade. He has another job, but he hand makes bagpipes basically at our house. 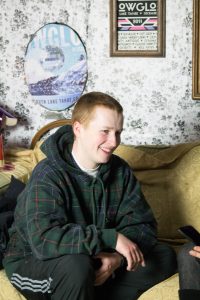 Did your parents guide you to do music?

Sam: I mean, having the laptop at such a young age was really helpful. Because back then, normally people didn’t have computers like that. They didn’t really encourage me to do it, it’s just something that I kind of found I really liked. It took a long time for me to really like what I was hearing and really have a musical grip, in a sense.

A lot of the earlier stuff is just complete experimentation, but going back to it makes sense in the timeline and stuff. No one around me was going, “Are you really good at music?” because it was so different to what people were used to. So that’s another good thing about Stirling. They’ve seen me doing all of the weird stuff and then asking, “What is all of this?” As soon as my music got a little bit of success, it was just kind of like, “Oh. Wow.”

Sam: Yeah. They do. My real passion is the jazz element and stuff, old influences. I started music basically through French House which is derivative of disco. So all of those elements are really what I like. If I make a track, I’ll show them the ones that I make that are not necessarily easy listening, but more understandable to an older person. And they really like that stuff. The orchestral stuff is in my music too, and they appreciate that.

When can we expect that?

Sam: I dunno. I’ve got Escapism III coming out in two months so I’m excited to release that. But that’s cool as well because I have like a trilogy. I’m going to have it as a box set and throw in bonus tracks and shit.

How do you balance the sort of dreamier aspects to your music with the sort of heavier hitting drops, if you wanted to call them that?

Sam: No, I would say there are drops in my music. I try and make the contrast hearable, but not obviously too intense.  I’ll try and push it a little bit by making it really solid, but not too hard. The bass has to be there and all that stuff. I don’t want like, EHH EHH EHH, you know what I mean?

When I’m doing my live sets too it’s not just noise, it has like some kind of progression to it. It’s all about ups and downs, man. Yah’ can’t have like, straight noise. And you can have chilled out stuff, but for the music it’s nice to have contrast.

Have you had any surreal music moments yet, like meeting your idols or playing some show?

Sam: I met Madlib in the first club I ever went and played in London. That was crazy. Shit. I just met Flying Lotus, too. He changed how I listen to music. He totally got me into jazz. And it’s cool, because I used to love electronica and a lot of people would hear Flying Lotus from hip-hop and then get into the electronica side. They kind of helped me get into the hip-hop side, but I already really liked electronica. So I think that also helped influence how I got my sound and stuff. And Madlib kind of like recognized me and then heard my name. It was ridiculous, man. 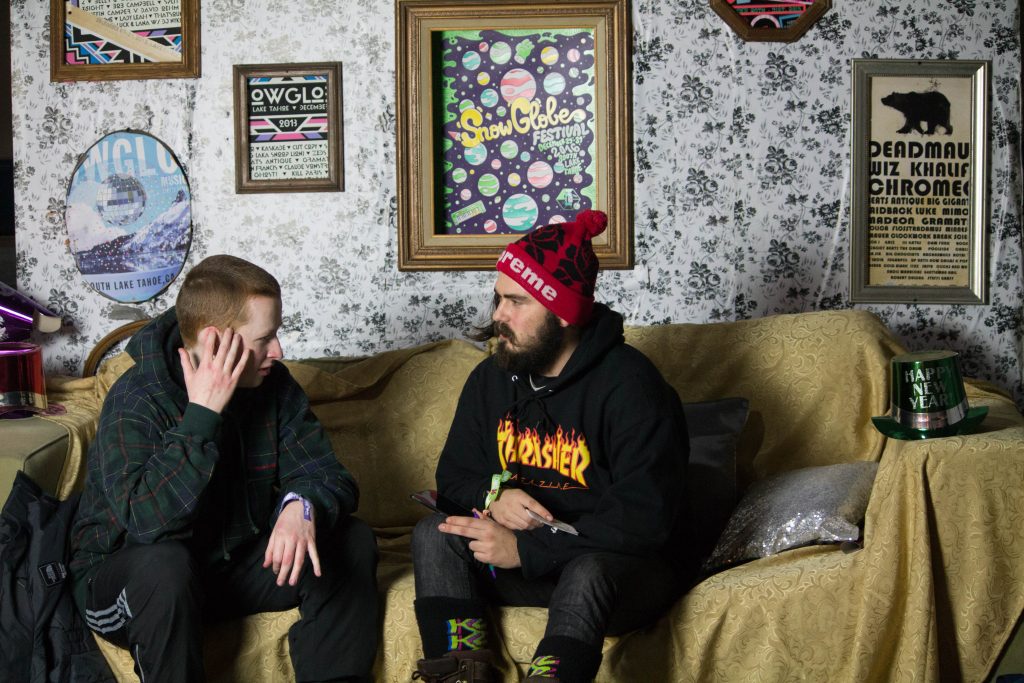 What’s your current relationship with the Soulection crew?

Sam: Nah. The Soulection crew are great but I’m not like affiliated with them anymore. I love all of the artists there. Everyone’s really nice but… I haven’t like told anyone what happened, so… But nah, I mean there is no point in mentioning it. They are doing their own thing so it’s all good.

What’s it like being on the huge XL lineup this year? I mean you’ve got Zomby, the Avalanches, Radiohead.

Sam: Really good, man. It’s very helpful and obviously it’s amazing to be associated with such a legendary label. They have so many albums and just projects to their name, it’s amazing.

If your music were a food, what would it be and why?

Sam: I want to say pistachios because they’re addicting. Nah just kidding. Uh… Stir fry? This is an intense question. AHHHH. I’ve got to make the right choice though. There is so much food. I can’t answer that one I’m so sorry.

I’ll go with pistachios because they are addictive.

Last one, we are a college radio station so what would you say to young aspiring artists trying to do things like yourself?

Don’t try to sound like anyone else. Try not to watch too many tutorials because then you are also trying to be like them. Just find your own way to navigate software without anyone else trying to tell you what to do.

It’s the same with music. If you find a skill which suits you just like go with that and then find all of the rest on the way.

Thank you so much. If you ever come by San Luis Obispo, you’ve got a place to stay.

Sam: Where is that?

Uh, it’s in between San Francisco and LA, we are right in the middle near Santa Barbara.

Peter Jensch is KCPR DJ and Cal Poly business administration senior. He conducted the interview; Jensch also runs the KCPR airwaves on Wendesdays from 10 p.m. to midnight. Cynthia Davis is a KCPR DJ and Cal Poly earth science junior. She shot the photographs; Davis’ show is Wednesdays from 6 p.m. to 8 p.m. KCPR is accessible via KCPR San Luis Obispo 91.3 FM and KCPR.org.