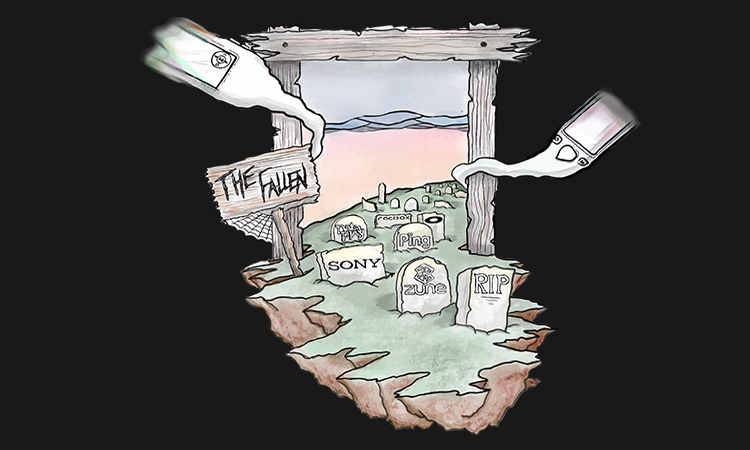 The relationship between music and technology is indisputable. Every medium we’ve used to consume music in our lives – new or old – is a notch in that progression. However, no technological progression in any industry is completely linear and clean.

Steps require miss-steps. Turntables, CD players, MP3s and streaming services are hallmarks of technology and music. But what about the abominations you forgot about?

Now, KCPR is here to dig up what should, for one reason or another, probably stay buried, Here’s an inventory of the junk box from the last 17 years.

Before the iPhone, before Apple Music, and before everyone had a smartphone, there was – the Zune.  Remember when got your first iPod? Was it the iPod mini? Maybe your older sister passed down her sleek iPod color, to the envy of your classmates. You might also remember the classmate who had something different. A young rebel, he sat in the back of the class, cut against the grain, and showed up to Pre-Algebra flashing her new Microsoft Zune.

The Zune came with innovative new features, incorporating social media and subscription based music downloading. Remember, the Zune’s first launch was in 2006. Zune early adopters had the option to pay $15 dollars per month for unlimited downloads, similar to the framework of today’s major music subscription services like Spotify. The Zune platform also allowed friends to send each other music.

Despite having all these features, the Zune – like that old classmate – was ultimately a complete failure. It introduced plenty of new features, but arrived too late holistically. By the time the Zune launched, Apple was unveiling it’s 5th generation model of the iPod, and already had a firm control on the portable MP3 market. Third party app developers had already established relations with Apple and were becoming increasingly comfortable with the iOS operating system.

Once Microsoft pulled the plug on the Zune in 2011, the term “Zune” became a commonplace term in tech communities analogous with corporate failure and humiliation, a la Enron or new Adam Sandler.

The Zune’s legacy does still live on. Elements of its core operating system are still present in Microsoft smartphones. The Zune also has a pretty hardcore community on Reddit – but then again, so does John Cena. Most importantly, we can still use the term “Zune” in our everyday language. “Dude I did such a good job on that English paper but turned it in too late! I totally ‘Zuned’ it!”

In the past decade, Apple has dominated most industries it has entered. However, in 2010, as Facebook and Twitter were solidifying their dominance in social media, Apple released Ping! The service allowed friends to follow each other and share music through iTunes. Steve Jobs described it as, “sort of like Facebook and Twitter meets iTunes,” but also, “something else… all about music.”

The launch of Ping! was an initial success; 160 million people signed up for service. However, Ping! became a rare Apple misstep for multiple reasons. First, Facebook and Twitter had a firm control on the social media industry and many users did not want to use another social media service. Secondly, users could only preview 30 seconds of their friend’s songs, which discouraged many listeners from exploring their friend’s recently purchased music. Finally, Ping! failed to integrate with Facebook. Despite a notable demo Steve Jobs presented of Ping! integrated with Facebook, the two software giants couldn’t agree on the fine print. In 2012, only two years after Ping!’s launch, Apple discontinued the service.

Sometimes the combination of two products can create a successful third industry. Apple combined music and telecommunications in 2007, and the iPhone quickly dominated the consumer entertainment industry. However, when Oakley combined its successful brand of sunglasses with headphones, the result was – as you may have guessed since they made this list – failure.

The Oakley THUMP sunglasses were notoriously criticized for bad sound quality and confusing audio controls. When initial sales were much lower than expected, Oakley turned to celebrity endorsements like Dog the Bounty Hunter and Lil Jon – arguably the most surprising endorsement duo to ever exist – to increase sales.

In a huge surprise, the A-listers couldn’t massage the Thump back to life. Oakley soon discontinued the product, but its legacy lives on in every Dog The Bounty Hunter rerun you will never watch.

The Sony NW- HD1 received praise by critics when it was first released in 2004. The NW-HD1’s aesthetically pleasing design meant positive comparisons to the iPod. Furthermore, critics were especially impressed with the device’s sound quality. Instead of using the standard MP3 format most competitors were using at the time, the NW- HD1 ran on the Sony’s ATRACT system, which offered higher sound quality at lower bit rates.

Paradoxically, the ATRACT system ended up becoming the NW-HD1’s downfall. Even though critics loved the high sound quality the ATRACT system offered, consumers found it too time consuming to convert their MP3 audio files to ATRACT files. After low sales number, Sony discontinued the NW-HD1.

In 2004, Roca-a-Fella was one of the dominant record labels in the music industry. With Jay-Z as the face of the label, the company was starting to branch out into industries beyond music recording. After Roca-a-Fella branched out into the liquor industry, the company decided to dive into the portable MP3 player market.

The result was the Rocbox, which came in a 256mb and a 20gb model. The main selling point was that both models came with exclusive content from Roc-a-Fella. However, an insufficient consumer push combined with poor design and interface pushed Roc-a-Fella to discontinue production. Roc-a-Fella had 99 problems and the RocBox was one. Heh.