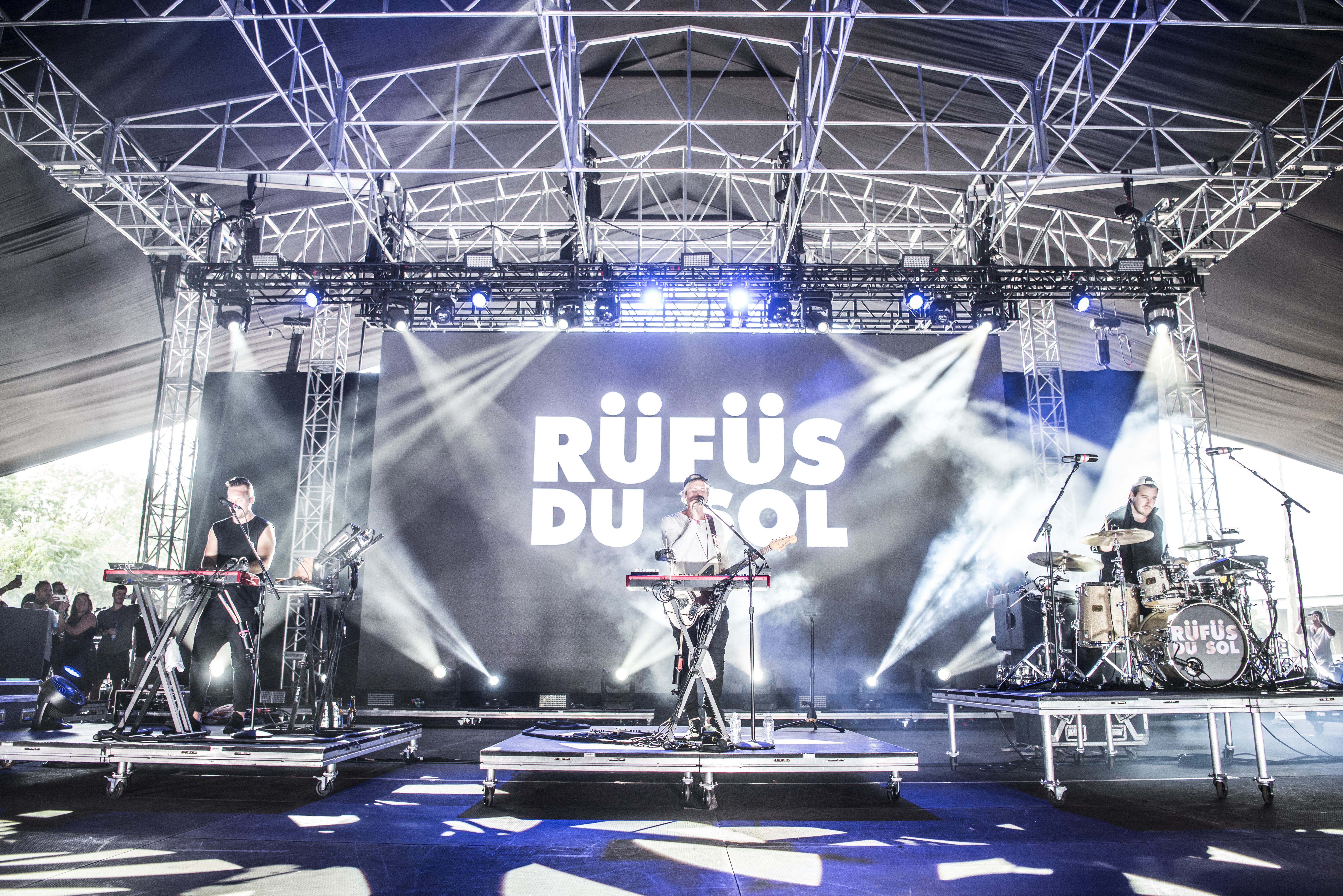 Before kicking off the Rüfüs du Sol winter tour at the Fonda in Los Angeles, keyboardist Jon George took a moment before the show to speak with KCPR. He broke down the inner workings of the track “Interbloom,” talked about his recent EP release under the moniker Juan Du Sol, and recalled Porta Potties escape in a knee-deep flash flood.

After running the festival circuit (Coachella, Outside Lands, SnowGlobe to name a few), the band’s euphoric live show has left fans with a reason to demand more from electronic artists sets. Live drums, guitar, synths, and vocals set Rüfüs du Sol apart as one of the best performers of 2017.

Hello. Hey! How are you?

Good man. How are you doing?

Doing great. Are you excited to play the Wiltern tonight?

Nice! At Coachella this past year I saw Tyrone climb the scaffolding. Is there any scaffolding for Tyrone to climb tonight?

Not sure!  There are a few big speaker stacks so we’ll see if he gets up there.

I have to ask, does he do that every show or was it just a special occasion that one time?

I can’t think of another time he’s done it since last year, so that was a while.

That’s amazing. So you guys have been touring around America on a bus the past few months. How is that going?

Yeah. We’ve been on the road now for about a few months now. It was only after a couple short weeks so basically it feels like we’ve been touring since March. But this bus, this lifestyle, is pretty easy. You get to sleep in a lot more and wake up in the next city. It’s a pretty nice way of touring actually.

I can just imagine how much fun you guys are having. Have you guys had the opportunity to work on any new music or any new projects while you’ve been on the road?

Not really. I think we’ve been trying to save ourselves not to overexert. We’re just focusing on the touring. We just rewrote a couple of older tracks, reimagined some stuff, and wrote a new intro to the show since Coachella so we’ve just had a little bit of fun doing that and obviously playing them live.

We are sort of waiting until this touring finishes in March of next year and we’re thinking we’ll relocate to LA for awhile and start writing the next record. I think by that stage we’ll be pretty pumped to get in the studio. We already have the itch.

That sounds great. I know you guys recorded the first album, Atlas in New South Wales, and the second album, Bloom, while you were in Berlin. When you were in Berlin did you happen to make it to the club Berghein?

Yeah we got to Berghein a couple of times.

Do you have any tips or tricks to get into there?

[Chuckles.] Don’t wear bright clothing, dress it down. You need to know like the number of people you’re about to enter with in German so you don’t giveaway that you are foreigner right away.

My best friend is there right now and he just went blonde and it sounds like he has to switch it up.

You guys definitely have a darker undertone in some of your songs. Did any of those experiences in any of those European clubs have any influence on your Juan Du Sol project.

Yeah, for sure. My Juan Du Sol stuff was just a bit of fun writing on the road earlier in the year and I guess I’ve been pretty inclined to write more clubby stuff. I sort of got into the music world by DJing and rediscovered my passion for making music too. I learned piano when I was younger, but I always have had a love for darker clubbier stuff.

There are just cheekier. Dirtybird is a big influence on what I really like. Just a lot of cheekier tech house sort of stuff. Maybe in Rufus Du Sol DJ sets we sort of make sure there’s a lot more melody and vocals to keep in check with our type of sound.

Have you tried to send any of your stuff off to Claude VonStroke at Dirtybird yet?

[Chuckles.] No I haven’t just yet, but I would love to make that connection in the future.

That would be wonderful. What would you say is your favorite track off of your most recent album, Bloom?

Maybe “Innerbloom” would be my favorite. You kind of go through stages like choosing your favorite kid. It’s a little tough when they all have their own place, memory, and love. I think “Innerbloom” has really stood the test of time in terms of being my favorite. We get to play it live every night and it invokes such emotion from the crowd so it’s really hard to not enjoy playing it.

If you had the chance to listen to “Innerbloom” for the first time again what would your ideal setting be and who would it be with?

[Chuckles.] Well I think that um – I’ve been telling the crowd some of the times we have played it to sort of set the scene for them and put them into sort of an out-of-space world because when we first made this song, we would just like sit in the studio. Our friends would come over. We’d set the scene for them by putting on these rocket launching documentary clips on the screen. I guess it’s time travel through space and galaxies. There was a visual, so it would put people in the right headspace. It would keep going and there was so much to imagine to yourself while also traveling through space.

So some of the best times were showing that to friends and family and seeing their reaction. I would vote for that experience again.

I was hoping to see you guys down in Orange County in California for [the DoLab’s] Woogie Weekend. I think it was two to three years ago. But it got rained out right as you guys got set up. It was such a bummer! But you guys were rebooked by the DoLab this past Coachella for a DJ set.

What would you say your relationship is like with the DoLab?

We could see how much of a fun vibe they were setting at Woogie Weekend and it’s such a shame we didn’t get to play that. It was so, so bizarre how that all went down. Flooding and portaloos were floating away and the generators got submerged in water and we thought it never rained in LA or in this part of the world.

We were pretty surprised, and then we were pretty excited for the DoLab stage because our friend Hayden James had played the year before at Coachella. He told us it was just such a fun vibe and when we got there it was such an amazing setting and part of the festival. We spent a lot of time there.

We spent a lot of time there watching our friends. MK played there as did What So Not. I think they know how throw a party and they know how to set the right tone.

Crucial question. Were you camping at Coachella or were you in a hotel.

The first weekend we had a really nice AirBnb that we booked out one for the band, and then another AirBnb for the crew. We all sort of chilled by the pool there and really laughed up the whole experience. It also was our manager’s 30th birthday, so we all just wanted to treat ourselves and enjoy it. The second weekend we stayed at one of the hotels that a lot of the artists were playing at, so we hung out with Harley [Flume] and his whole crew and we had a really good time.

Well we’ve been touring with two Australian bands at the moment. (The first is) Yuma X, who are doing really cool things. They’re sort of this down tempo, really sexy, sultry vocal and I’m really excited to see where they go. Also KIIo.

Kllo kind of has the same sort of vibe. They’re down tempo with really lush, nice production. I’m really hoping big things for them and I think Hayden James could do really well and I think he is already.

We also had Dana Amy who is the vocalist on “Hypnotize.” She was touring with us for the first part of the tour as well, and she’s been doing a lot of DJ sets for the DoLab guys over here so I’m hoping for big things for her too.

How do you think your sound has shifted for your upcoming album?

Well we’ve been trying not to talk to much about it because it is always fun to come into the studio with a fresh approach and no preconceptions. After Atlas we have been touring around the world and we sort of learned more about what we liked.

We’ve experienced a lot more and saw a lot of bands play at a lot of different festivals, and I think the experience we had in Germany, just listening  to the way people really appreciate subtleties and sonic space. So there are things that we have already taken on board and I think we just want to keep furthering that. I think all the experiences we’re having around the world at the moment are definitely going to impact on that.

Have any of your relationships in your personal lives affected your choice to move to LA?

Um no. I think the main thing is isolation for us I think that’s why we started the writing process in Berlin last time. It’s just about working from home with friends and family around which we loved to do. We can totally immerse ourselves in the experience when we don’t have any distractions. I think that’s what we’re looking for when we come to LA. We really like the weather here and it’s a pretty cool place. I think that why we wanted to make the move.

You’ve got to love it. You guys were in South Wales and then Berlin and now LA. I feel like LA is such a dense place and can be almost be suffocating at times. Are you guys just going to be isolated in the studio or are you going to escape to the hills? What’s your plan?

We’re not too sure yet. We’re just starting to sort out what our options are. I think also the ability to work with other people here and connect [is important]. I guess everything is going very well over here in America and I think having the ability to cut the time for a quick festival or a quick show somewhere around in America really opens up a lot possibilities. I think we’re just trying to sort out our options and aren’t to worried about the suffocating part of LA just yet. [Chuckles.]

I definitely understand that being from Southern California. Jon, I wanted to say thank you for your time and have a great show tonight.

Thank you so much.

Alex McCracken is a KCPR DJ and Cal Poly art and design junior. He commands KCPR airwaves on Tuesdays from 8 p.m. to 10 p.m. Listen via KCPR.org or on KCPR San Luis Obispo 91.3 FM.

Professor plans event to raise money for kids with cancer