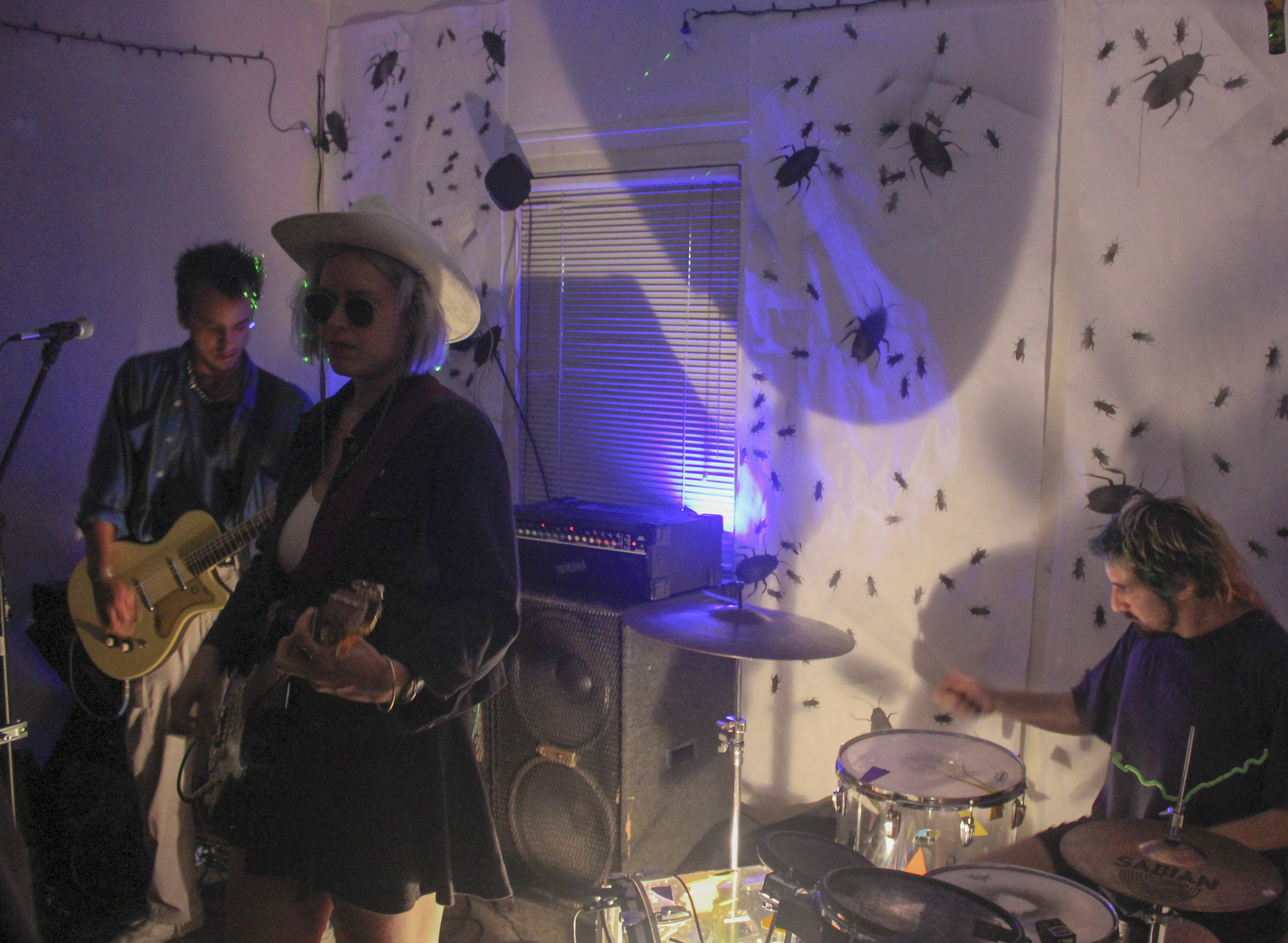 So Pitted, along with Santa Cruz surf metal outfit Cosmic Reef Temple and Oakland punks Dogs in Ether shook the walls of the small house on Broad St. that provided the venue for this noisy and eclectic show.

Dogs in Ether kicked off the show with a steady set of hardcore punk, incorporating the standard elements of high speed, high volume, and high intensity. Embodying the classic punk aesthetic, the band provided a raw and angry sound while perfectly keeping tempo and rhythm, exhibiting the hardcore ethos and well-balanced musicality of past bands such as Minor Threat and Black Flag.

The second band to go on was Cosmic Reef Temple, a five-piece surf-metal ensemble from Santa Cruz complete with drums, keyboard, bass, guitar (made completely out of metal), saxophone, and many, many pedals. Before the set, I’d never seen a metal band incorporate a saxophone. My apprehensive interest was sparked and, after a nearly 45-minute set of instrumental surf-metal fusion, they surpassed my expectations.

Amps reached to the ceiling with enough chords and hardware to power a telecommunications station, and Cosmic Reef Temple provided a sound similar to the feeling of being pummeled by a wave while surfing in a coral reef; harshly abrasive yet stunningly beautiful.

The main act of the night, Seattle noise trio So Pitted, closed off the show with a bang.

KEXP DJ Sharlese described the bunch as having a sound similar to the feeling of dropping a lollipop on the ground and covering it in dirt and garbage. So Pitted takes noise rock to a new level of fuzz and distortion. Taking their name from a viral video in which a southern California surfer hilariously loses himself in describing the feeling of riding a perfect barrel, So Pitted captures that feeling of pure enjoyment with their loud and distorted music.

The band provides a unique sound as they blend the classic Seattle grunge of Nirvana and Mudhoney with the technicality and experimentation of Devo and Wall of Voodoo.

After the release of their first LP, neo, earlier this year through legendary label Sub Pop, So Pitted began to mark their place in modern indie music. Tracks such as “Cat Scratch” and “Rot in Hell” combine the simple chord progressions of punk rock with the noise and intensity heard in avant-garde genres such as free jazz and power electronics as singer and guitarist Nathan Rodriguez angrily growls along to the rhythm and drumming of bandmates Jeannine Koewler and Liam Downey.

Throughout their set, So Pitted explored a range of sounds and emotions with their unconventional use of electronic drum pads, vocal distortion, and the switching of instruments, which established the band’s versatility in musicianship and songwriting.

As neon laser lights bounced around the tightly packed living room of the house that provided the venue for this noise-fest, all three bands provided their own unique sounds and performed to their fullest.

If you missed this concert and seek to experience a show of eclectic and obscure music, dig through the cracks of the local music scene here in San Luis Obispo and you are bound to find bands and artists ranging from math rock to noise punk and anything in between.

Best Skating Spots at Cal Poly – if it were Allowed