At 7:30 p.m. last Monday, Memorial Day, Vundabar, Dante Elephante, and Shoot the Mariner jammed through the second week of KCPR’s pledge drive. The venue was the Grange Hall at the south end of town. A small venue, the dance hall provided an intimate show for all fans who came out to see the bands and support the station.

Shoot the Mariner, a hardcore rock outfit from our very own San Luis Obispo kicked off the show with a bang, presenting a fast paced and emotional set that got the audience up and attentive. With a sound that mixes the raw emotion of bands such as American Football and Capn Jazz with the technical skills of the Dismemberment Plan and Dr. Dog, Shoot the Mariner filled the small auditorium with noise and emotion. Having released a small EP titled UNDERGROUNDS on the internet eight months ago, Shoot the Mariner recently played various shows across the state of California from San Francisco to Orange County.

Santa Barbara’s Dante Elephante took over the show after Shoot the Mariner, providing a set of chill surf rock sounds. A garage rock outfit, Dante Elephante kept the steady pace of the show moving, mixing fast paced rhythms with heavy guitar effects reminiscent of shoegazing bands like My Bloody Valentine. During this set, moshing and audience participation grew as the music intensified, creating a positive feedback loop of energy between the performers and the fans. As singer Ruben Zarate noted the he loved playing in San Luis Obispo between songs, the audience illustrated that they loved his music. 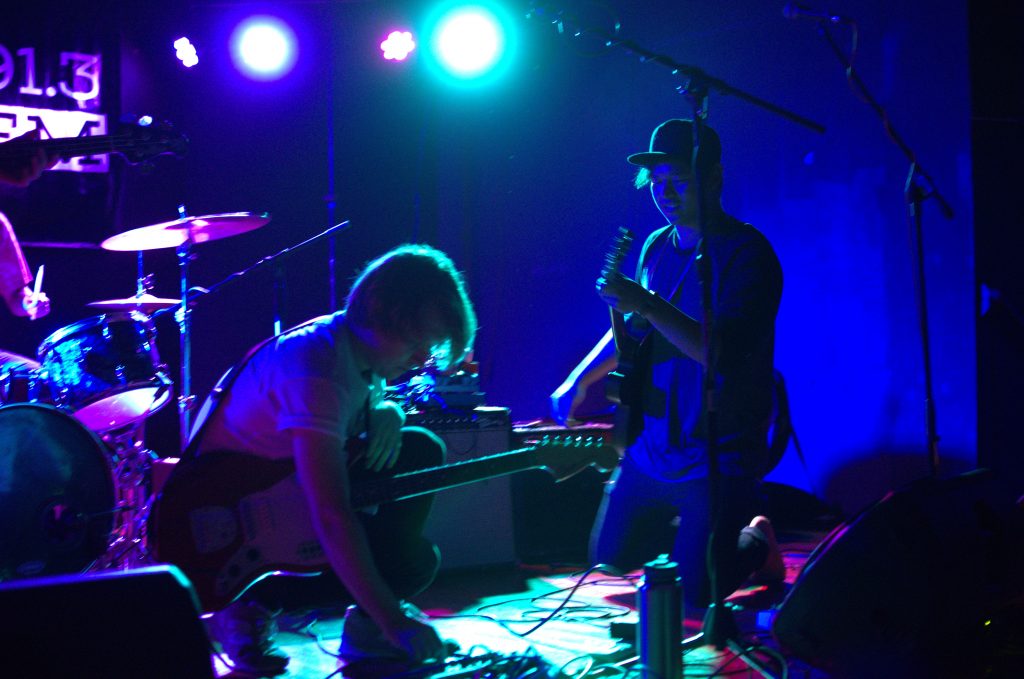 After Dante Elephante exited the stage, Vundabar took over. A power trio from Boston, MA, Vundabar has described their music as being heavily influenced by the cold and “leathery” city they come from. “California audiences are more relaxed,” explained guitarist and vocalist Brandon Hagen, who described Boston as a “sad and angry place” with “grey weather.” Mixing lyrics based on observations from the band’s personal experiences with complex, mathrock-esque rhythms, Vundabar is one of the most intriguing bands to grace San Luis Obispo.

Vundabar took the Grange by storm, leaving a sea of awestruck audience members with their unabashed display of noise and weirdness. Occasionally cutting off songs abruptly to engage in screaming or spitting competitions with each other, the band placed no filter on their raw energy, reflecting the stage antics of past bands like Nirvana or the Dead Kennedys. A mixture of avant-garde showmanship and boyish fun, Vundabar captivated the crowd, who consistently shouted back at them and egged them on.

As Vundabar powered through their set, they presented well known tracks such as Oulala (at many shouting audience members’ request) and Ash in the Sun as well as debuting a few new songs they plan on putting on their new album in the works. Their entire performance seemed to build up to their final song, a seemingly never-ending rendition of Voodoo, an ominous sounding shuffle off their 2013 album, Antics. Feigning an end to the song several times, the band turned it into a freeform jam session, complete with a guitar solo, drum breakdown, and, yes, screaming.

As the band left the stage, the audience shouted for more, but at the end of the night, the music from the three talented bands satisfying enough.

Taylor Morhardt, who produced the video interview, is a Cal Poly journalism sophomore and KCPR content contributor. Ian Ridsdale, who wrote the article, is a Cal Poly political science freshman and KCPR DJ.