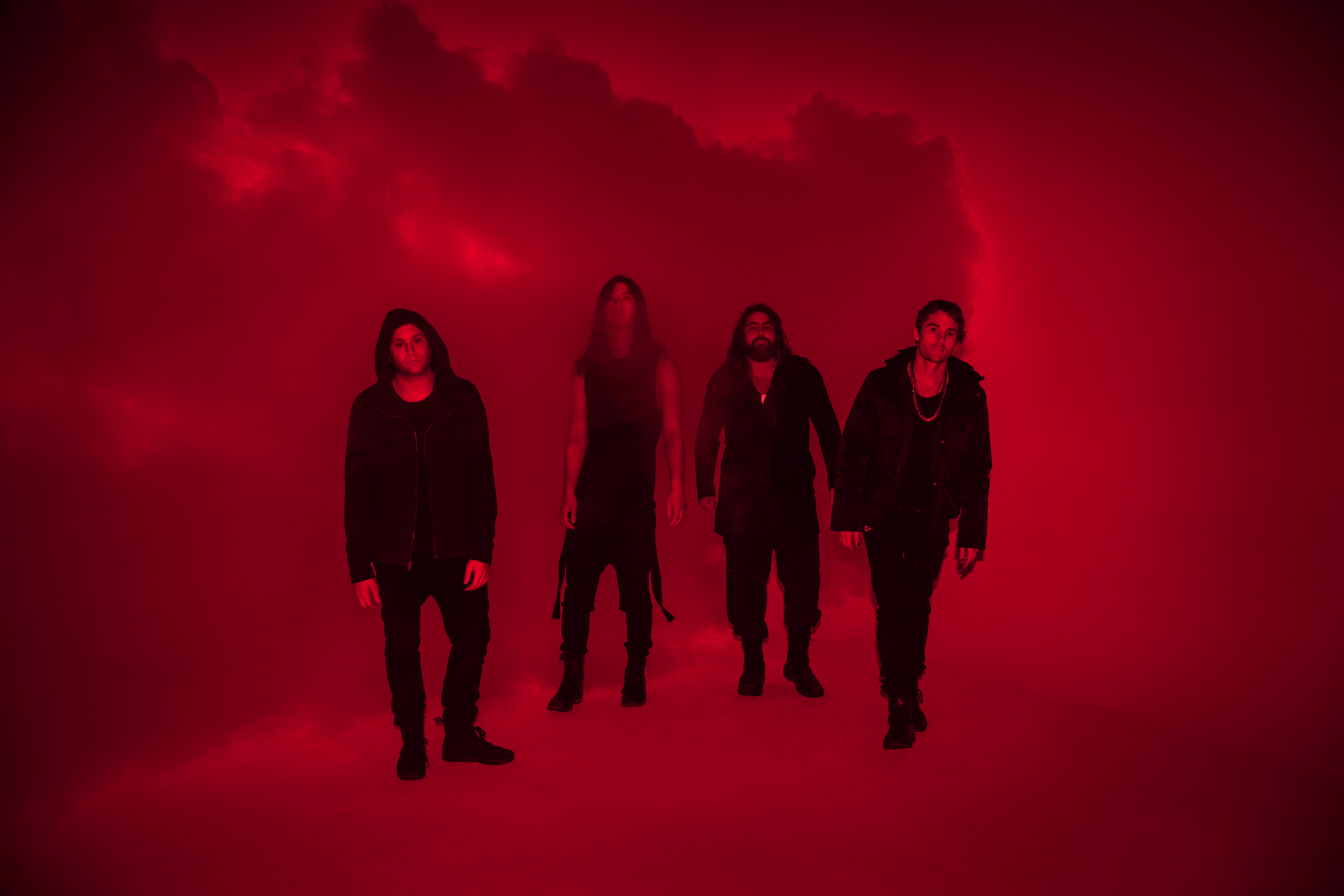 As a member of a band that’s played Coachella and Pitchfork festivals, has over 70,000 likes on Facebook, and released a third full-length album at the end of last year, you’d have to be pretty fearless, pretty selfless, or pretty stupid to release your personal phone number in the final 20 seconds of your band’s latest music video. That, or you’ve got a lot of time on your hands. For whatever reason, John Famiglietti did just that.

Famiglietti’s band? The Los Angeles dance-y noise rock outfit HEALTH. (Notice the caps-locked delivery of their name, it seems to be a pattern.) The music video? Also directed by Famiglietti, was made for “NEW COKE,” the ninth track from 2015’s DEATH MAGIC. The album is an industrial, electronic beast that still seems to get a bit poppy. It came six years after the one before it–a dangerous decision for any artist that wants to stay current in the music industry.

Still, the band is very much alive, according to Famiglietti. We reached out to him over the phone to find as Famiglietti and the rest of HEALTH descended into Indio Valley to play Coachella. Find a check-up on HEALTH below. Or, you can call Famiglietti and ask him your own questions. You now know where to find his number, after all.

Do you have anything fun planned?

We are driving to Ventura to play with Purity Ring, like a warm-up show for Coachella.

Ooh! Fun! Rad! Okay, so just to start it off, I just noticed that the first albums you released with (the label) Lovepump United and Death Magic actually came out on Loma Vista, which releases stuff from really prominent artists like Iggy Pop, St. Vincent, and Spoon. So do you have any specific reasons for this switch?

Um, I don’t know, there’s like very few labels nowadays operating you know that will pay for records and have good enough structure for you and it’s kind of like the Wild West in the music world right now. So if you can find a label that’s willing to pay for things, you definitely want to be on that label. So, that made it kind of an easy choice. Also, it’s a really good label. We wanted to work with the team that’s working there. We wanted to work with the people running the label—just a good label.

Yeah, totally. Have you seen a difference in how HEALTH is doing because you’ve switched over?

You know, that’s always hard to gauge. I mean in our experience working with this label, it’s pretty similar to what we’ve done before with LovePump or other indie labels so, I don’t know. You can’t really trace one thing to the other, like is the label helping you or not? But things have been going well regardless.

Yeah totally. Just talking about Death Magic, were you worried about releasing it so long after the album that came out before it?

Yeah, that’s a death sentence in music, total death sentence, unless you hit like huge, huge success. So no, I would never recommend it and that definitely was not the plan. Sometimes things work out, you know, that way.

So it didn’t mark the end of HEALTH after the release of Death Magic?

No we’re back. We’re like a phoenix from the ashes.

You’re the LCD Soundsystem back at Coachella. After so many years.

Yeah, see that’s the thing, they broke up, you know. We were inactive longer than them, so—we didn’t reunite or whatever.

What are your favorite and also most hated aspects of Coachella?

Well it’s very fun, I like everything around it: the parties, the renting a house, being with your friends. Least favorite, you feel very bad about your body. Some of the best times I’ve been at Coachella is if you do it really like the fashion industry; you go to the parties during the day, and then you don’t show up to the festival until the sun’s going down.

Yeah totally, then you miss all the hot hours when everyone else has their shirt off and you feel bad about yourself?

What’s your most coveted modern-day convenience?

Internet, the texting… You know in the old days you just had to, like, walk around and hope you bump into your friend. Texting is a big one, that’s a big one.

So, you directed the video for “New Coke.”

And you put your cellphone number at the end of it, have you been getting a lot of texts and phone calls still, even though it came out a while ago?

Yeah, they’ve slowed down a bit. So now I only get about one call a day, but for a while I was getting like a lot of calls a day.

Do you have any like repeat regulars that you recognize calling you all the time?

Yeah, there’s this kid who just bugs me and who just pisses me off. He just texts me like forty times in a row, like this total nonsense. And he’ll keep hitting me up, like hit me late at night, and keep asking more questions. And then he’ll like wait a while, then he’ll come back. And then I got in a fight—there was this one kid who was like suicidal and he said that he thought that—he didn’t even like the band, I don’t even know how he came across it—but he thought we were just trying to send him a message and that the video was about him, and that he was going to kill himself.

And then I was trying to talk him out of it, and then I started getting really pissed, and we got into this long argument. And then I was like, for legal reasons, I really shouldn’t be arguing with this suicidal kid.

Not very many. Most are very nice, mostly boys. And then there is a strangely large number of kind of emotionally disturbed young men who have drug problems or are kind of suicidal, and I don’t know why that’s a thorough line of people who like our music. But that you know, it is what it is.

Is it interesting for you to interact with your audience like that and see who actually knows about HEALTH and listens to your stuff?

Yeah, I’ve always been into that. I mean, when I got into indie music—whatever you want to call it—a huge exciting thing for me was that you could just walk up to the guy and just talk to them at the show. So I’ve always worked the merch booth since we’ve started and you just talk to the fans. It’s kind of nice. Yeah, and also when we started we would do these DIY tours. It was really common for us to just crash in some kids dorm room or something, and nowadays you know we don’t do that.

So, just kind of going on the music video thing, what was it like working with Eric Wareheim for your video for “WE ARE WATER?”

Yeah, he’s actually a friend, I went to Japan with him two years ago now. I see him semi-regularly, friends-of-friends. He’s an active dude, he’s around. Cool guy.

Oh yeah, for sure. Did you watch the shows and the videos he made before you actually started working with him?

Yeah, I was a big fan. I mean, everyone’s a huge fan of Awesome Show, and so that was a thing. He was actually coming to our shows and we were talking to him like, “Oh man, we want you to do a video, but we could never afford you,” and he was like, “I’ll just do it,” and we were like, “really?” And he did and that’s, to date, our defining video.

Oh yeah, definitely. I mean, the whole milk-puking thing in “NEW COKE” was pretty big, but…

There’s a magic and I think he was even surprised, somehow, that this cinematic thing just came together: the special effects, the girl running, and that was his thing too. He saw this weird vision when he heard the song and he talked to this girl at a party, who ended up starring in the video, that had this total fear, mortal fear, of being chased and murdered by a giant man. And so he was like, “Woah. That’s really weird. That’s my idea for the video. This like, has to happen.” So she worked through her demons in the video. Very interesting.

Wow, so it was kind of like therapy and art.

You also worked on the soundtrack for the video game “Max Payne 3.” And so what was it like to release music for a totally different audience than for the ones that you play for?

It’s cool. I think with the indie—whatever—indie music world, you have a fickle audience, opinions can change at a dime, and they’re also very suggestible. It can be some new trend is going, and you’re like, “Yeah!” It can be kind of, I wouldn’t want to say fake, but it can be kind of weird and ingenuous sometimes. What’s great about video game people or whatever, say what you want, but they’re very real. There’s not a lot of arguments about stuff. If a game gets very good reviews, people will consider it a good game. If you play it, you’re like, “that was good…” It’s not like music where it’s so subjective. So getting their acclaim and them really liking the soundtrack, and their respect, it was still very real and it was also very mainstream. A totally different section of people, non-hipster, non-whatever-the-hell-people. So yeah, it felt really good. There’s a reality to how they like stuff, like an unfiltered-ness.

Or just a realness. It’s like, “I like this.” They know when they like something. I feel like with a lot of cool—whatever you want to call them—cool music fans, there’s a lot of other weird political things at play. When they say they like something, that can change later, or five years later. They’re like, the whole narrative of music changed, it’s all about this genre. Music is very much like fashion in a lot of ways, and sometimes, it’s like, “Oh. Everyone’s wearing really long t-shirts now.” Like, “Oh, okay, fuck that other stuff.” You know?

Yeah. Does that worry you at all?

I mean, we’ve been around for such a long time. Also, things can last a lot longer nowadays. I mean, with the internet nowadays everything kind of still lasts forever, or it can just be around as long as enough people like it. It’s not the same as it was. Like back in the old days, yeah, if the change of the guard happened, certain years you would just be out of a job tomorrow.

Thank you so so much for talkin’ to me, and all that!

Being Burglarized with Nosaj Thing

Maybe LCD Soundsystem Sold Out, but Who Cares?