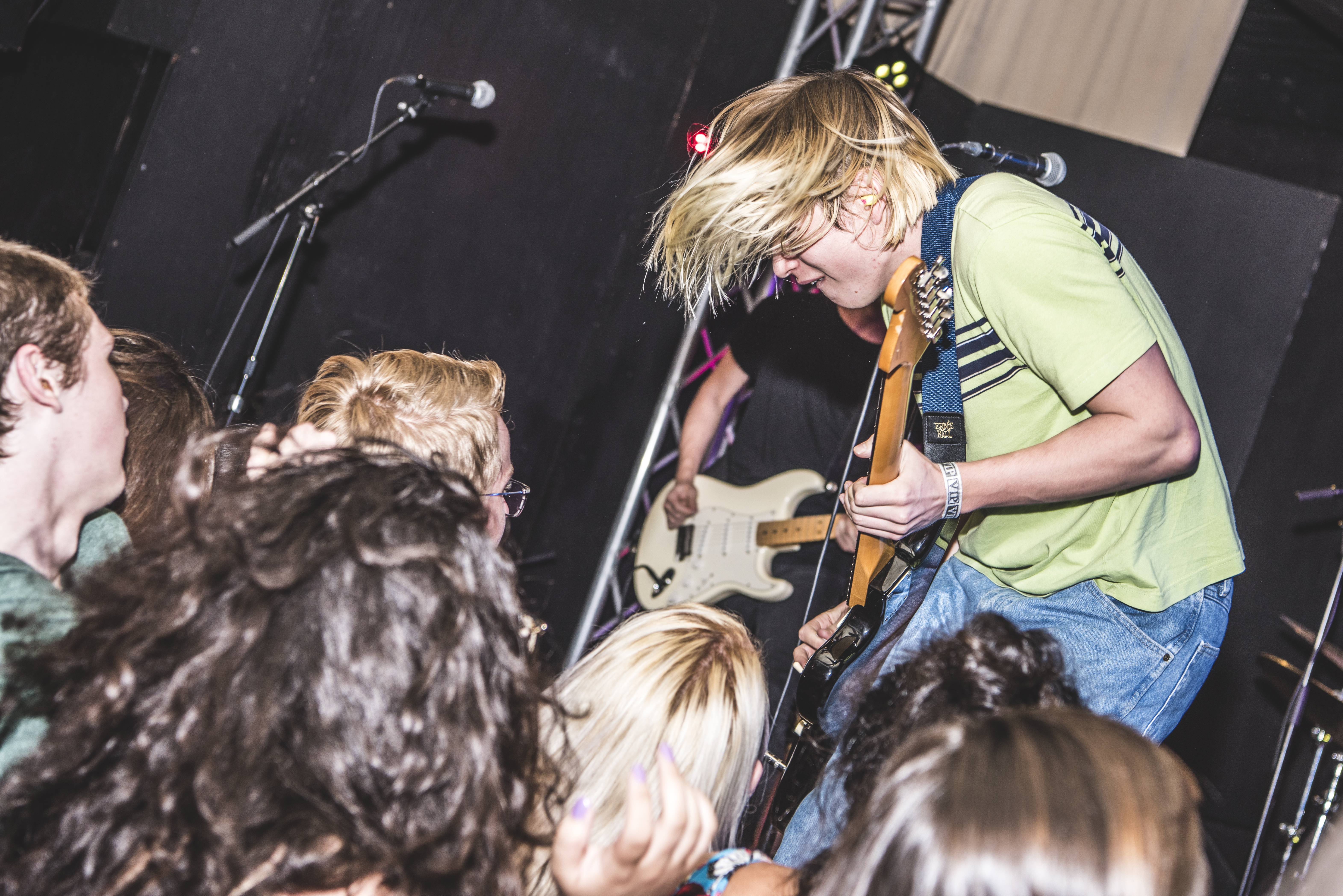 Last May we had “Swimmers” play our KCPR benefit show. Since then, they’ve dropped a few vowels, put out a new album and embarked on a nationwide tour with The Frights. On Tuesday April 5th that tour brought them to the Grange Hall.

The night kicked off around 7 PM with sets from Los Angeles’ Sad Girl and Party Baby.

The crowd perked up as local favorites The Frights took the stage. Bodies were frantically moving from the first note of “All I Need.” Concert goers rushed the stage to take their turn falling back onto the audience and surfing across the room. However, it was the interlude of Metallica’s “Enter Sandman” that took everyone by surprise. Bassist Richard Dotson poked fun at the crowd yelling “Do you know this shit!?” We certainly did. The San Diego band finished their set by playing their latest single, “Kids.”

The audience dispersed as SWMRS set up for what would be the biggest show The Grange Hall has seen in quite some time. Singer/guitarist Cole Becker started with the slow, almost psychedelic track “Hannah,” then launched immediately into the roaring introduction of “Harry Dean.”

The Oakland natives ran through the entirety of their album Drive North, taking quick breaks to introduce the songs. Guitarist/Vocalist Max Becker connected with the SLO crowd by revealing the track title “Ruining My Pretending” was given to him by a Cal Poly professor. Max was enrolled in Cal Poly before taking a break to focus on the band.

Their penultimate song saw the band’s frustration with the current state of America. They ripped through a cover of “I’m Not Proud of the USA” by little known ’80s band The Mice. Cole and Max preached that the United States has a lot of great people, but “also a lot of shitty people.” Cole encouraged everyone not to be influenced by the shitty ones saying: “This is America. Think for yourself.”

In their last song, there is one thing SWMRS wanted the audience to know: they really hate Los Angeles. “Drive North“ is a loud, grungy anthem about the bands disdain of the SoCal city. On the album version, you can hear the lyrics “I hate Santa Monica Boulevard. I hate Venice Beach. I hate Tarzana too.” This time around Cole added in some favorites of Los Angeles’ Burger Records by screaming “I hate Froth. I hate Cherry Glazerr. I hate Los Angeles.” The song ended with the Becker brothers shouting “Drive North” into the microphone and perfectly concluding with yelling “Drive North to San Luis Obispo.”