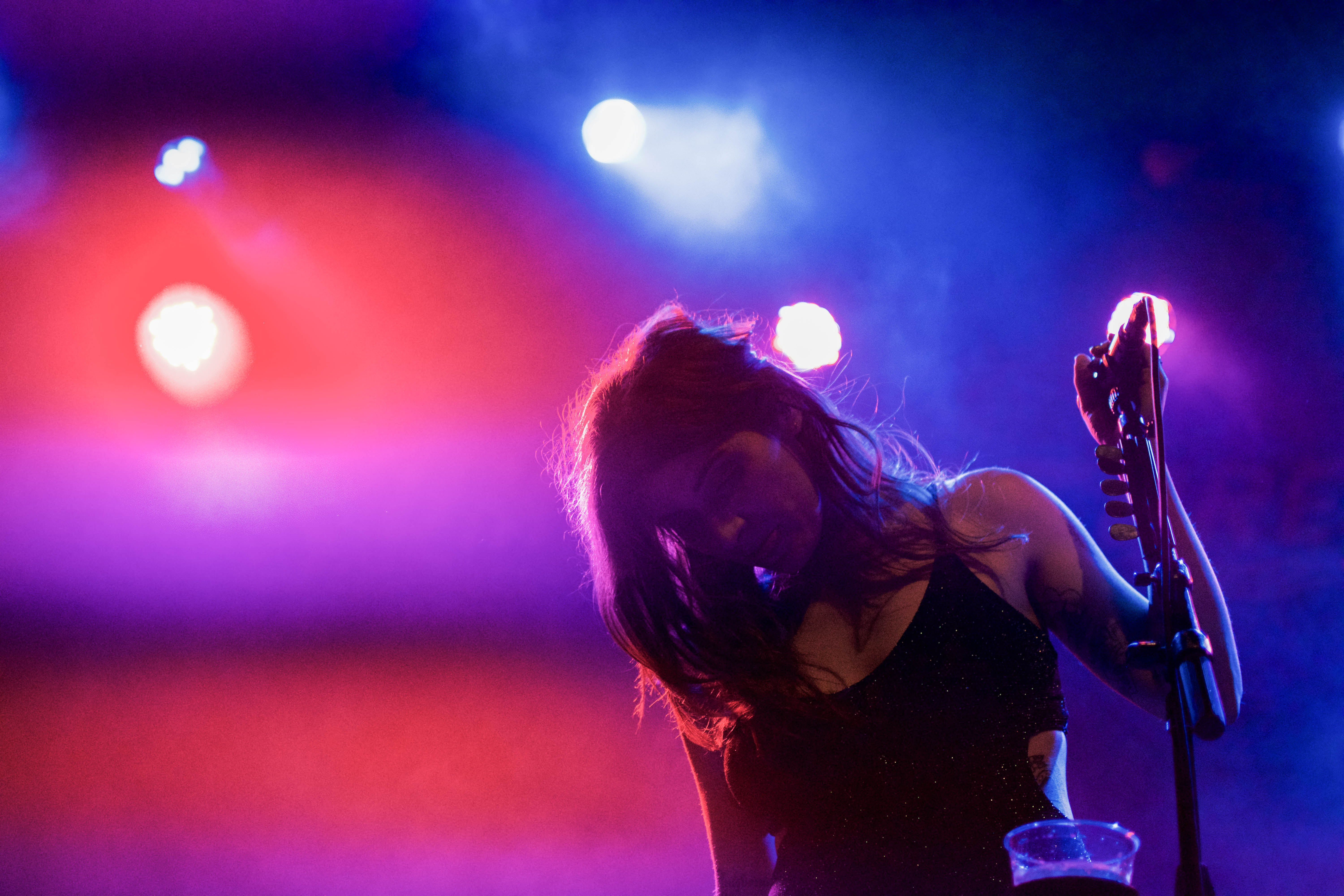 I shuffled up the steps and saw signed pictures of legends past: Jim Morrison, Jerry Garcia, Eric Clapton, Dave Grohl–all rocking out on the stage of The Fillmore in San Francisco. Thinking of generations of misfits, deadheads, and punk rockers before me, I hoped to channel their energy Tuesday, March 1 as my helpless fan girl dreams came true on stage. As regular listeners to my radio show on KCPR San Luis Obispo 91.3 FM can attest, Wavves and Best Coast have been staples of my music diet. That’s been the case since sophomore year of high school. I clearly remember the disappointment five years ago when my mom wouldn’t allow me to see them on their Summer is Forever tour.

Parental controls were not an issue this time as Wavves and Best Coast, along with Cherry Glazerr, reunited a second time for the Summer is Forever II tour. Stale cigarette breath and a slight wave of sweaty humidity washed over me. I knew I was home among this crowd of grungy 20-somethings, still buzzing in the comedown of Cherry Glazerr’s high energy set. Elaborate chandeliers and elegant vaulted ceilings overhead made an ironic, bourgeois frame for the massive banner set behind the stage.

The banner featured UFC-themed cartoon depictions of a fearsome Nathan Williams of Wavves, clenching his fists in a power stance as he screamed. On the opposite end of the banner stood the challenger: Best Coast’s Bethany Cosentino, who peered stoically down at the crowd with a championship belt draped over her shoulder and (of course) a mustached cat by her side.

The aggressive theme inspired the crowd as Wavves walked out on stage. No time was wasted inciting mosh pits with a song from their latest solo album, V.

I joined in the communal aggression, years of screaming along to lyrics and jumping around my living room washed over me; this is the only way Wavves’ droning chords, pop-y guitar riffs and angsty lyrics are meant to be experienced. The band’s apparent indifference towards the crowd, in combination with greasy hair and classic band tees, merely served to add to their punk aesthetic.

The band interrupted their sets rarely, and briefly, to provide context for songs. However, the crowd hung onto every word.

“This song is about aliens,” Williams nonchalantly uttered. All my neighbors and I looked at each other, in frantic search of our mental collections of Wavves lyrics, for the extra terrestrial references. The first chord strummed and there was no mistake.

“Heavy Metal Detox,” my teen angst anthem, played. The impulse to crowd surf overcame me. I was off the ground in seconds with a little help from my friends. I was shredding the human gnar, supported solely by sweaty hands and a love for pop punk. Immediately after I reached my zenith, I was happily returned to the mortal realm, ready for whatever the show had to offer next.

The rest of the set comprised mainly of upbeat songs off their latest (and best) three albums. However, I was surprised when Williams announced the band’s favorite original to be “Demon to Lean On,” a slower song for the group. Lit lighters hovered above the crowd. This only reaffirmed my belief that the performance was, as the kids say, “lit.” The show ended promptly on “Green Eyes,” their classic banger. The show was just about everything a number one fan could hope for.

The only thing missing? Best Coast joining them on stage to play “Nodding Off,” but alas.

My slight disappointment didn’t linger too long before the crowd static was overrun by a heavy metal intro song as Best Coast came on stage. Cosentino strutted out in a sparkly onesie, collected the attention of the stage, and burst into “Crazy for You.” The audience, drenched in the sweat of their surroundings, was just about drained by Wavves. Sings and sways replaced shoves and shouts for the Best Coast half of the show. Cosentino’s vocals, identical to how they sound on record, soared through the air. Lyrics intermingled with memories of beaches, laying out in the sun and embracing everything it means to live in California.

The lead guitarist looked to his right and leaned over to allow his long black hair to billow behind him. He relished in wind created by his own melodies in the speaker.

Best Coast combined with the pastel colored spotlights to fully embody their feel-good sound. The on-stage presence was much more interactive than Wavves. Cosentino let loose little background caveats on songs, told us about their previous “Summer is Forever” Tour, and even shared that there was an organization at the venue that would help you register to vote.

Why would we want to register to vote at a concert, you might ask? Cosentino didn’t hesitate to give words of motivation.

“Let’s take down that motherfucker Trump!” she yelled, as they dropped into a song.

At this point, I’m thinking this is a woman I can admire. I was pleased to observe that the audience seemed to know the lyrics to most of the songs. This provided a necessary family-like connection for an enjoyable live music experience; and, like family, you have to love everyone even if they’re tone deaf like the person that was standing next to me.

As we were nearing the end of the show “California Nights” came on, the most popular song off their latest album. With it came the full effect of the Fillmore. A giant disco ball sent out rays illuminating all the chandeliers and decorative architecture on the upstairs balconies. The audience vibrated as everyone raised their hands and sang along.

Right then and there I downloaded the energy and fulfillment the concert gave me, just in case someone were to ask, “What is living in California like?” In the center of the triangle formed by the three So-Cal rock groups, it’s safe to say that California music scene is a good one to be in.