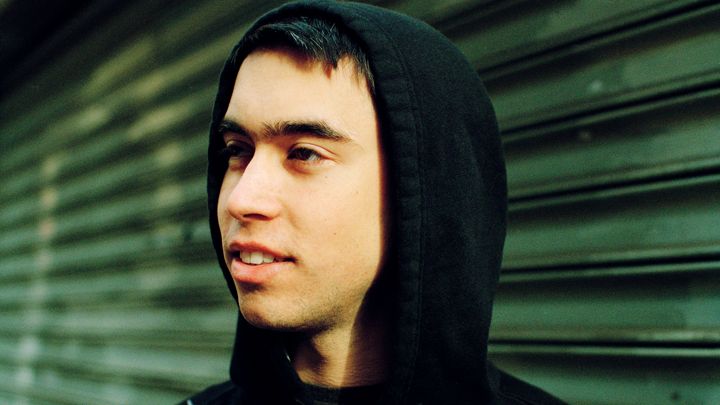 Alex Giannascoli sits on a plated Venn diagram, centered between the rising Philadelphia DIY scene and the nooks of Bandcamp that, up until now, he’s hidden himself in. He was 13 when he started experimenting with his Macbook to produce “unpolished” music that would later christen him the zeitgeist of contemporary songwriting. Now, Alex is in his early 20s, and spread wider than he’d ever have imagined. Following the release of his first major label record, Beach Music, his melancholy bedroom-pop stands as the vanguard of introverted indie.

This necessitated an interview.

Alex G is the greatest conversation we didn’t have over a cigarette, in a long line at CVS or at your sister’s uncle’s adult Bar Mitzvah. Even from a phone call 3,000 miles away, the humility in his voice was clear. Interview below.

Will: Hey, thanks for joining us today. I’m going to start out by saying I need to be completely transparent here and admit that I definitely stood behind you in a bathroom line at PhilaMOCA last summer and didn’t say anything. I just needed to get that off my chest.

Alex: [Laughs.] No way, dude! I hope I wasn’t rude or something like that.

Will: Oh no, I was definitely just too intimidated, but now that we’re not face to face, I’m totally comfortable.

Will, the Philadelphia area native that he is, immediately asked about Alex’s life in the blossoming music scene that’s put out indie powerhouses like Radiator Hospital, Free Cake for Every Creature and Hop Along. The creative culture of the city hasn’t been completely discovered yet, and it remains a destination for cheap housing and loud music. However, Alex’s reach largely surfaced on the internet.

Will: How do you feel, that to some extent, the Internet is sort of an archive? That you know, to a level, we can’t really escape? And that’s cool because, with your music we can sort of track your entire arc and the way you’ve developed, but at the same time —  things go on the web that we don’t like. For example, if we completely slander you in this interview, that’ll be on the Web.

Will: And I mean, there’s this duality because you are someone who puts your music out on the Internet and that has built a community.

But even before his ventures on the Internet, Alex’s music spread through the admiring hands of his friends.

Alex: And now, like there’s all this music online that I made when I was super young that I’m not super proud of, but I guess as long as people understand the context of it, it doesn’t really bother me. I guess it’s kind of dangerous having certain things never be forgotten about you. Because people do stupid shit all the time that should definitely be forgotten, you know?

Will: Totally. Just to go back, which releases are you referring to?

Alex: There’s a lot of stuff on YouTube. I remember someone made their own Bandcamp called “unreleased Alex G” (since deleted) and it was a ton of shit that I made when I was mad young and I was really flattered, but it was weird. Because I don’t want people to listen to that music and think that I’m endorsing it because I think that music is bad, at this point in my life. I wouldn’t make stuff that sounds like that because it’s kind of immature, lyrically. I guess that’s the appeal for some people, but you don’t want to give that impression of yourself when you’re trying to get older and shit, you know what I mean?

Will: Right. And it seems like someone sort of uncovered something and without your prior knowledge, sort of threw that up for everyone to see.

Alex: Yeah, and it doesn’t even bother me too much. It’s just so flattering that people are even interested enough to hear it. But that’s my only complaint: that I worry it misrepresents me as a person.

Will: And those unreleased tunes, how did someone find that? Did they like, climb through your window at night and get a flashdrive off your computer?

Alex: [Laughs.] No, I just think they ended up in public places somehow. Like I used to make CDs when I was in high school and just give em’ out to friends and stuff. I don’t know, like there was this one friend I had — we used to take the bus together — and he started putting all that old stuff up on YouTube and it didn’t bother me, because he was cool and it was before there was any hype around my music, so I thought it was just cool that someone liked it.

Will: As far as actually being on a major label, has that affected your mentality about making music? I know that you still recorded this new album in the bedroom, but was anything different in your mind?

Alex: No. Nothing was different because I’ve always had pretty unrealistically bold ambitions for my music when I’m making it you know? Even though I’m making it myself, when I’m making it, I’m not making anything that I could consider being casted off. I put as much effort in it as I possibly can because I like doing it so much.

Will: And then another aspect of being signed to a major label, what’s it like to become really popular? Is that ever overwhelming?

Alex: It’s hard for me to say, because I don’t feel that way. Like I play shows and you know, relatively a lot of people come out. It’s fucking awesome, but that’s about as much as I feel from popularity. It’s just positive for me because I’m playing shows and able to pay my rent, so it’s just cool. It’s not like people are like, recognizing me on the street or something like that.

Alex: [Laughs.] Yeah, I don’t know if I look forward to being popular like that.

Will: If we weren’t having this phone call right now and you weren’t making music, what would you be?

Alex: Uh, dude, uh. I have no idea. Probably really pissed off somewhere, doing something really stupid. I don’t know what I would be doing. Music has been the best part of my life since I was a little kid. It’s all I thought about for a long time.

Will: Can you talk a little bit about your musical upbringing? Is there like a specific album from when you were young that got you into the whole idea?

Alex: The music that I really love was showed to me by my sister. She’s a lot older and my brother’s a lot older, too. My brother was really talented musician —  there were always instruments around the house and he was just super talented to the point of genius, you know what I mean? Like he could hear stuff on the radio, duplicate it and stuff. He brought home a guitar when I was a teenager and that’s when I started playing guitar, because it’s pretty easy to write songs on the guitar. But before all that, my sister was showing me bands that she was listening to. One of my earliest favorites was “Play” by Moby. That’s the first album I got obsessed with. Like before that, I didn’t really think about music, but I guess I was in elementary school and I listened to that album so many fuckin- sorry, so many freakin’ times- sorry, I curse, like yeah. That was the first one I really loved.

Will: Where and when are you the most in your element?

Alex: Probably recording at home. That’s when I feel the most confident, when I’m alone [laughs]. Recording.

Will: You’re sort of free to bounce ideas around and no one’s gonna say anything about it. It’s just you.

Alex: Yeah exactly, like, it’s a really good feeling.  Almost like you’re talking to everyone you want to talk to you know? It’s like communicating, even though you’re by yourself. Because you know people are going to hear it eventually, and you can just make this thing that you want to say.

Will: Right. And when you’re speaking — musically, at least — who are you playing for?

Alex: Sometimes it’s just like myself, or sometimes there’s specific people I’m thinking about, like you know, normal life shit? Like, I’m sure you got someone who you’ll go home and worry about or think about, you know? It’s just stuff like that. Or just trying to make some piece of work that transcends all of that, like  — not to speak too pretentiously or something — but to make something that stands on its own. Like not as a communication to a specific person, but just like, a nice work of art or something, you know? Sometimes I think of it like that.

Alex: I’d like to make music that stood for that a little more. When I was younger, it was all hyper-personal or something, and I feel like that’s a little immature at this point, so that’s why I sort of try to distance myself from that old stuff.

Will: So part of the M.O. now is that even if you’re speaking to someone, you want everybody to be able to access that conversation?

Will asked about the cover of Alex’s 2015 album, Rules. Alex said his mother painted it of his sister, and then went on to describe, in great detail, how it looks much more real-to-life on pressed vinyl.

Will: Are you just trying to sell us albums right now?

Will: It was a pretty good sales pitch. If you weren’t going to be a musician, I think you would be a used car salesman.

Alex: Man, that would be…I would be so impressed with myself if I could sell cars.

Will: Something else that I also needed to ask was: you had a Reddit AMA not that long ago and said you were screwing around with GameMaker. I wanted to know if anything actually came of that.

Alex: Damn, yo. I made a lot of like, very beginning stages of games. I probably have 6 or 7 of them. But nothing that is finished enough to share at all, you know? I really like that idea because I really wanted to try out that method of storytelling. It’s fucking awesome. This is something that’s probably never going to take off because I’m preoccupied and kind of lazy and my friend has a lot on his plate, too. But my friend’s a really good graphic artist, and we’re talking about trying to make a game together. But we haven’t even started, so who knows.

Will: Hey, maybe it’ll go on the deluxe edition of your next record.

Alex: [Laughs.] Yeah, like some shitty game. I’ve got so many shitty games man, it makes me look like a psycho if you were to look through my computer. Like they all just go to the first few interactions and then they get frustrated and it turns into some shitshow. They’re pretty bad, but i’m trying.

Will: [Laughs.] Let me know if you come up with anything great.

Alex: I will, I’ll let everybody know.

Now, listen in full for what’s really on Alex G’s mind. And search history. It should also be noted that the following interview segment contains NSFW themes including, by not limited to, virginity, wiping while standing up and bug tacos.

Annie Vainshtein and Will Peischel are KCPR DJs and Cal Poly journalism juniors.