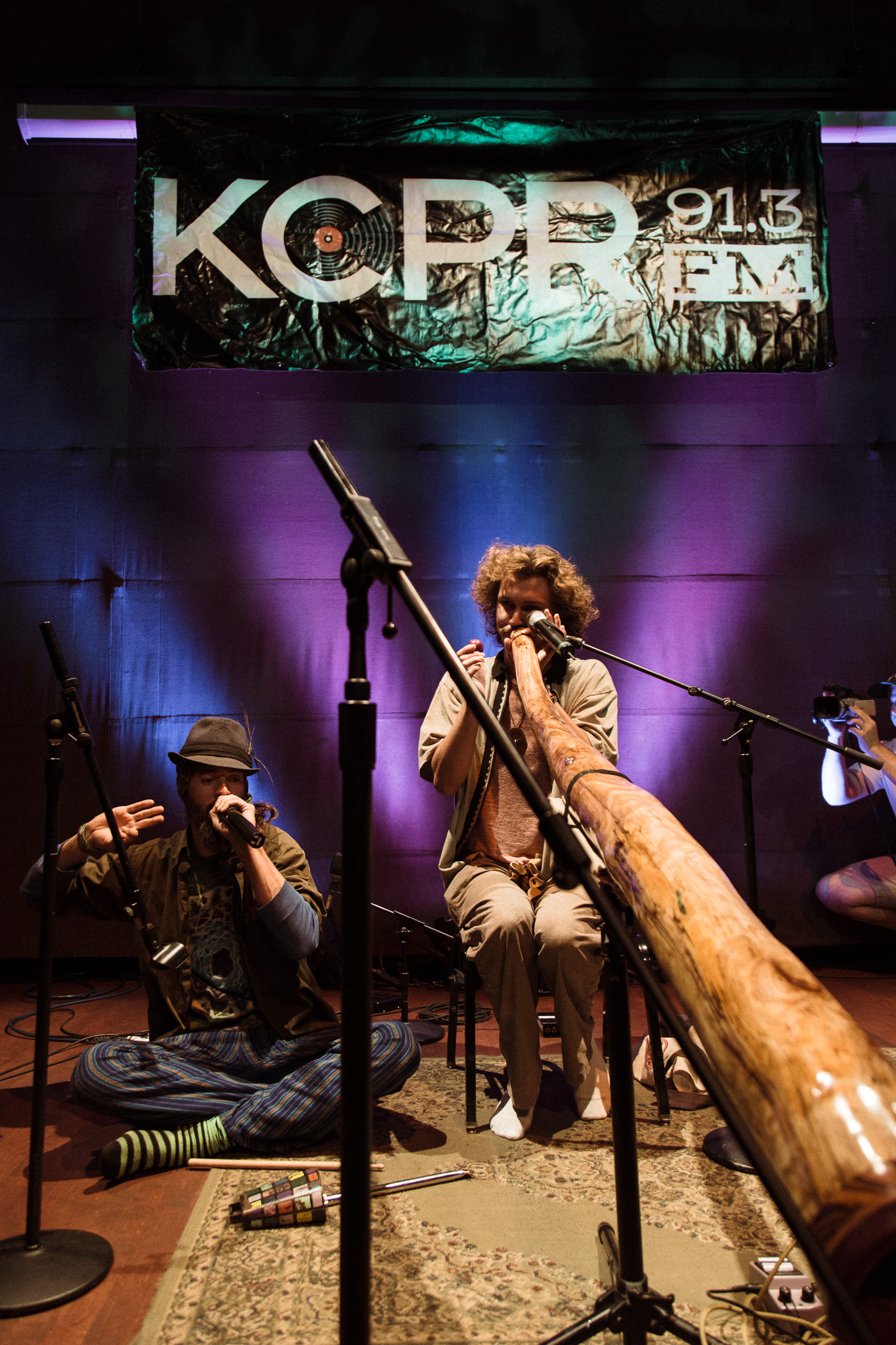 Listen, Learn, Repeat: The Path of a Music Director

In the downstairs showing room of the Performing Arts Center, KCPR held its quarterly open mic night. Clusters of chairs, tables and sofas were placed around the room. A soft green backlit the stage. As I walked around before the show, a dirty, new-age blues song crackled over the room’s speakers. Two girls in the corner scratched at acoustic guitars, each trying not to notice the other. A guy in torn jeans checked his kick drum.

An older woman who looked like what I have tried and failed to describe as anything other than a flight attendant from “The Hunger Games”, walked by me and smiled graciously. There was a dude with a shaggy mohawk that was either a very specular blond or the same green the stage lit. The motifs of ripped denim and rad haircuts would keep popping up throughout the night. The room was full of people drinking coffee out of small styrofoam cups, eating doughnuts and sitting on big mismatched rugs edging up to the stage.

It’s important to note that the PAC regularly hosts acts like the Cal Poly Symphony and renditions of “The Nutcracker.” The building itself is soft and layered; the entrance is an impressive spread of clean, angled glass panels and the handrails look furiously polished. Even the carpet seems to encourage tasteful whispering, maybe even silence. KCPR’s event last night prompted a very interesting conversation between these two worlds about occupying the same space. Of all the first-timers I talked to, no one expected the PAC to be so transformed.

There was a theme last night of performers coming on stage and leading off with a kind of endearing disclaimer about their inexperience. Griff McConnell shared that his performance was the “first song [he’d] ever played for not a close friend or a coffee shop that had [his] close friends in it.” Poet Jenny Smith read a poem she’d written the day before. A three-piece blues outfit just ripped to shreds a song they hadn’t “ran through at all”— the first act all night to almost blow the speakers out. I talked to a singer and guitarist named Megan before her set. She was nervous about playing for such a huge crowd, which of course, I couldn’t blame her for. I almost told her about the live stream. There was such a spontaneity to it all—a feeling that you were witnessing something intimate and personal. It was positively arresting, this feeling, and it certainly wouldn’t prove to hold specific to a type of performance.

The only act there with a name that I caught, besides Shoot the Mariner, were the Hopeless Romantics. They were a high-energy duo, a kind of folky and bluesy genre. Their sound, though, had the potential to go anywhere. One of the guys picked his guitar and sang while the other played the absolute daylights outta the Cajon. They’re in the market for a bassist.

Standup comedians Trey Robinson and Brett Tyler killed it. They were smart with their joke structure and their deployment of puns. During Robinson’s set, I heard a little girl, who couldn’t have been more than eight years old, losing it — I had never seen such an earnest, unapologetic laughter during an open mic night comedy set. It was adorable, contagious, inspiring and it was probably the best part of my night.

A dude played a didgeridoo he made himself; its droning was mesmeric and spiritual. The guy he played with had a slide whistle and a kind of percussive bell. Against the grainy buzz of the didgeridoo, he repeated, “The quickest way to remember that you are already enlightened is to cultivate a deep sense of remembrance for what already is.” Equally mesmeric was a performance by Julia Hall. She worked with a loop pedal to create one of the fullest pieces of vocal music I’ve ever heard. She covered a Grimes song which I’m sure it prompted a bunch of people to check out the original.

Poet Mallory St. George performed a poem that gave it to America right in the teeth, challenging not only the problems of the gender hierarchy but also the attempts to fix them or writing them off. It harked back to a bigger question —  the relationship the individual to a larger group. The acts itself constituted what felt like to me, a very earnest attempt to at least bring light, if not, make sense of certain ideologies in our university, town, country.

The setting of the, relatively, conservative, neat PAC and the almost spooky setup of the venue got me thinking. Technically, we live in Oprah-proclaimed “Happiest City in America”, which on one end, is dandelion charming, but that “Happiest City” has more to do with boutiques lining Higuera Street and key lime sangria happy hours than anything else — anything realer.

We live in a place where there is a great pressure to be happy, slow down and have fun while somehow simultaneously excelling in school, work or just generally getting ahead. The characteristics are not that unique. So when you ask Julia Hall this question, “So why do you do what you do? Why make and perform music?”, and she responds, “It keeps me balanced,” those concerns carry a bit more weight. What I saw last night — though perhaps I won’t be so bold to say this is anything more than personal observation — was a gathering of people determined to embrace something you would never find in a magazine. The result was nothing short of constructive.

Where to locate the open mic event:

Kevin Morby and The Digitization of Tradition